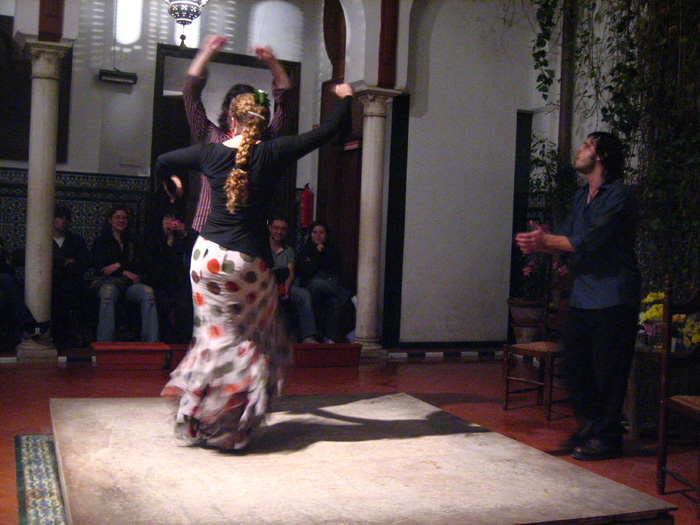 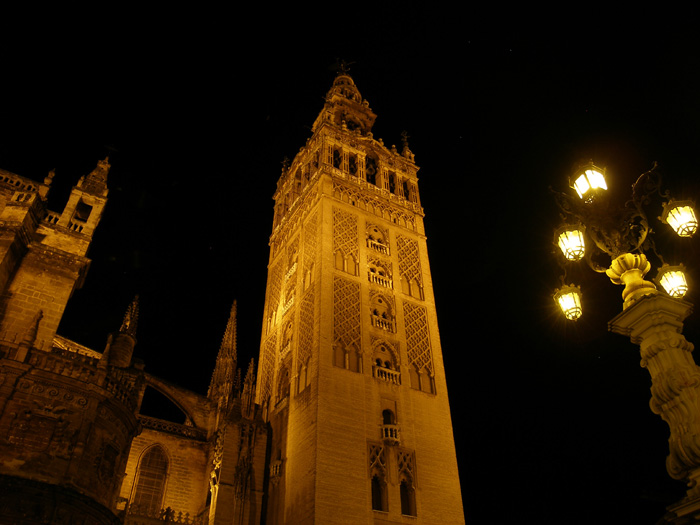 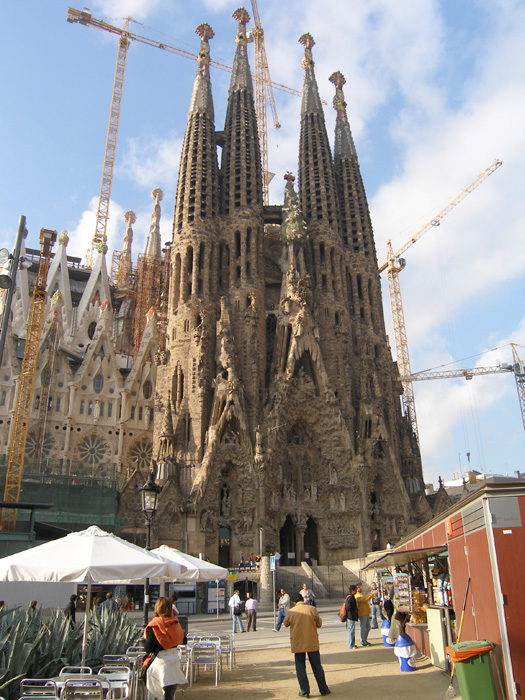 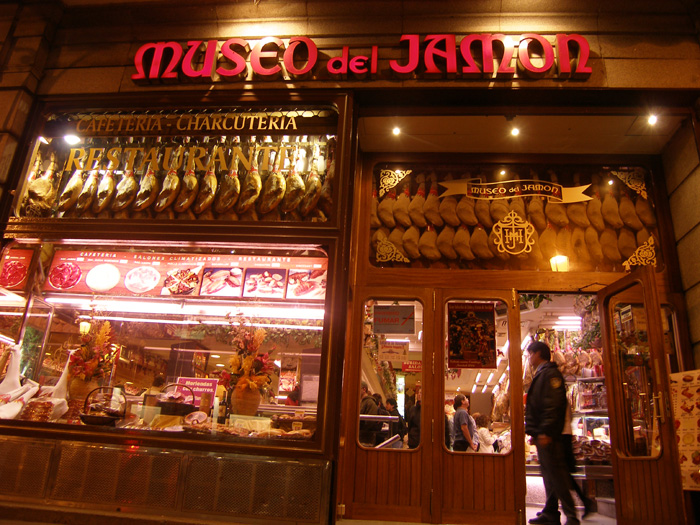 Well, we are currently in Madrid in Spain and we have just finished our breakfast of pig’s blood sausage, rabbit livers in paprika and onion, and kidney stew of some unknown animal, but whose kidneys look bigger than a chicken’s but smaller than a pig’s… YAY for us not knowing enough body parts in spanish to order decent tapas!!!

…Anyhows, we were going to start the blog off by saying… WOOHOO!!! Spain is now officially our 50th country!!!

But last night after we missed out on getting tickets to see The Violent Femmes in Madrid, I tripped over on the way to a cinema and seriously busted up my ankle!!!

…AAAAAAAARRRRGH and Fuck a duck!!! Other than friggin HURTING and badly swelling up, it suddenly occurred to me that it is likely that I am being punished for blaspheming in Fatima.

That’s right! …It just so happens that I go and bust up my ankle the VERY next day after sending out our last blog about me being sacreligious and moonwalking in Fatima… And LITERALLY it was only ONE hour after I was just showing Avril how fast I could moonwalk in socks across our shiny tiled hotel room floor!!!

…Oh MAN! I am completely spewing since I can’t walk now, let alone moonwalk… And I suspect it is probably some religious conspiracy like the Godly-Powers-That-Be decided that it was much too dangerous to allow me to continue using my moonwalking powers for evil, and hence instead of striking me with lightning, they busted up my ankle instead, removing my moonwalking superpowers all together!

And it worked… I am NEVER EVER going to blaspheme by calling Mary a Space Alien, or moonwalking at a religious site EVER again… AMEN!

But the only good thing to come out of it, was that I was actually struggling for something interesting or immature to blog about Spain, since we have actually spent the last 2 weeks here just shopping and eating.

Holy cow… Spain simply ROCKS!!! I actually can’t believe that we left Spain as our last country to visit in Western Europe since Spain would have to be the BESTEST shopping and eating that we have had in the whole of Europe!

In fact Spain is SO awesome… it HURTS!!! No kidding… EVERYTHING hurts!!! …including my ankle!

Man… first of all, our tummies HURT since we started with 2 days in Seville, in the Andalucia in the south, and absolutely stuffed our faces with tapas since the guide book said it has the best tapas in the whole of Spain. 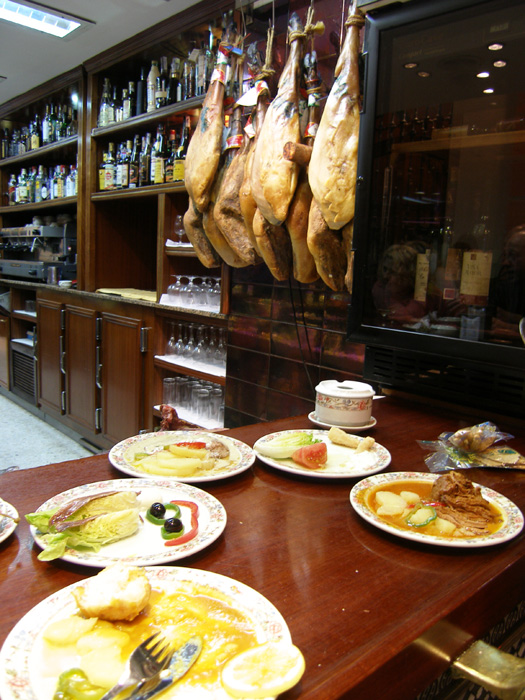 And then we moved to Barcelona for 8 full days, where our credit card started HURTING since Barcelona would simply be the most AMAZING shopping in the whole of Europe!

In fact, there are SO many funky cool shops and designers in Barcelona that we literally maxed out our credit card, especially since Avril rediscovered her punk and ska roots in the awesome high quality punk clothing shops, and I managed to find the bestest gay clothing shops where I normally shop to get fitted tops.

And of course our heads AND our tummies continued to HURT after drinking Sangria, Cava, and gorging on tapas every single day… And the night life is so cool here that even if you get drunk or over-eat, you’ll never barf-a-loner in Barcelona!!! (Man… That’s so catchy, I should copyright it…) 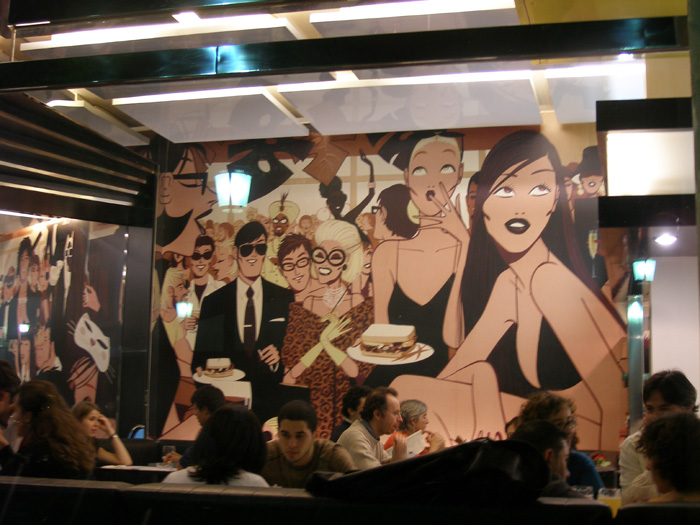 In fact, even though we didn’t do that much sightseeing outside of the spectacular Gaudi architecture, we still reckon that Barcelona would simply be the most FUNKIEST city on the planet! 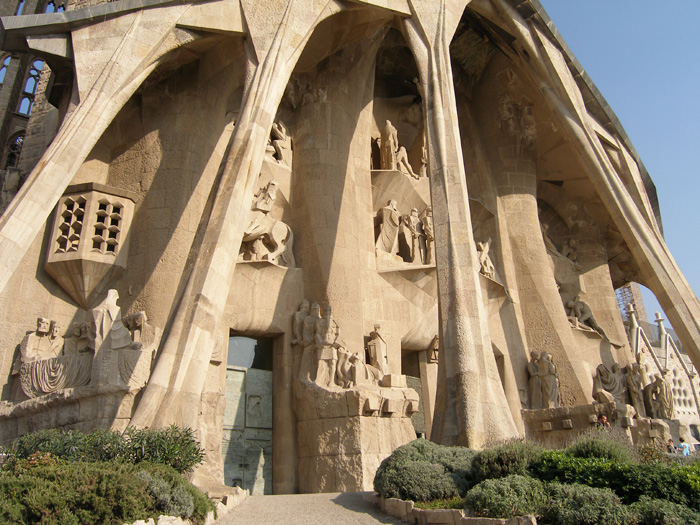 The only few downsides were, that our lungs now HURT since the Spanish would have to be the heaviest smokers in all of Europe…

And the ozone hole HURTS since it was actually cheaper for us to fly between cities than to travel by train or bus! Budget flights in Europe ROCK!

And our bodies and our colons HURT also, since Spanish don’t believe in vegetables and we have eaten so much meat lately that we actually felt so weak from lack of veges that we ended up having to go to McDonalds just to get a healthy salad! How SAD is that!!! 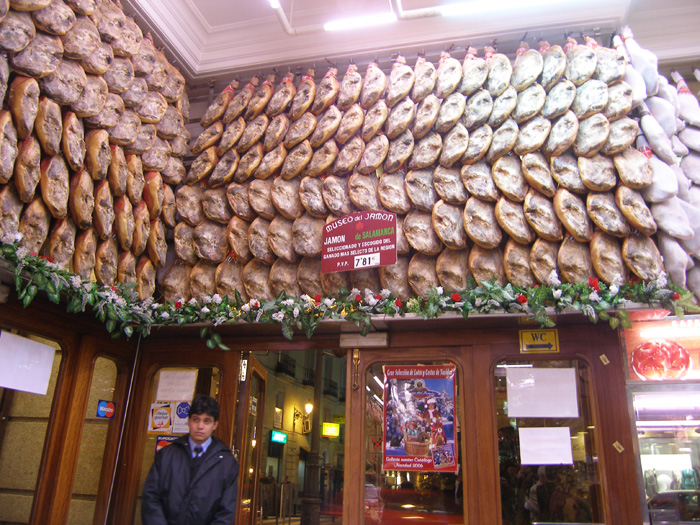 But the main downside was that although Avril thought the Spanish guys were HOT, I couldn’t tell if the Spanish women were hot at all because of all the female mullet hairstyles that have become the fashion here!

Holy smokes! I have never seen so many female mullets EVER!!! And I don’t care how good looking a girl is, looking at too many mullets HURTS my eyes and gives me a headache, AND I am sure that I read in some medical journal somewhere, that prolonged exposure to mullets can DEFINITELY lead to eyeball cancer!

Anyways, so we are now in Madrid for 4 days which hasn’t impressed us as much as Barcelona since it is more of a financial hub and full of arty, theatre and cultural snobby stuff… although it is a very lively city since there are actually traffic jams here at 2am in the morning… 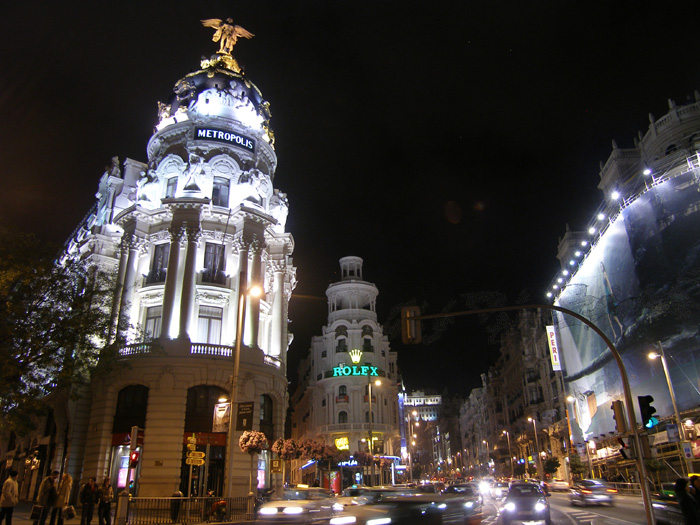 But it looks like I am going to spending the next few days with my foot resting since we are off to New York for 8 days on Monday to visit friends so I want to be good for that.

Anyhows, if you are bored, our Spain pics are at this link, and we also have some Andorra pics at this link since we decided to do a day trip to Andorra, the small 20km wide country in the Pyrenees between France and Spain… Just to make it our 51st country!!! YAY!!!

PS Graham Bolger who produced the CD that I did the cover for, and who has also worked with Natalie Imbruglia and Coldplay, and who is producing Sinead O’Connor’s next album just left a reply on one of our blog entries and mentioned that Sinead O’Connor had seen my artwork and had liked it! HOLY CRAPPAROONIE we were in an internet cafe in Barcelona at the time and we both literally squealed like little girls when we read it, and then I almost fell off my chair and banged my head since my head was SO swollen… I ROCK!!! Yay! You can check out the comment at this link.

PPS Holy Cow… it’s now midnight and we just came back from the cinema again since we can’t do much with my busted ankle… And as we came out of the movie, a group of about 20-30 young punks with spikey hair and mohawks just walked past us and started smashing cars and shop windows and then throwing bins at cars driving on the street!!! Holy smokes… It was TOTALLY like a scene out of some Anarchy in the UK footage from the late 1970s or early 80s, and there were about 200 people on the streets just watching them leave a trail of destruction behind… and NO-ONE was doing anything or calling the police!!! Anyways, they went away and then about 20 minutes later came back and started destroying things again, and still there were no police there… And one punk just picked up a huge wheelie bin and tossed it into the window of a car that was just parked at a red light… Holy Shiit!!! I have NEVER seen anything like it before! Anyway the riot police turned up after about half an hour and of course they missed everything… We got a couple of pics, but we were actually a bit scared to have our cameras out since they were all wearing masks, and it was VERY freaky shit!!! 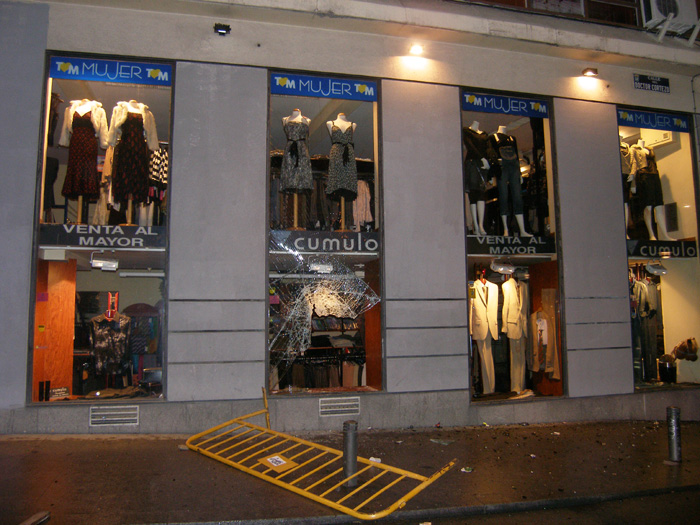 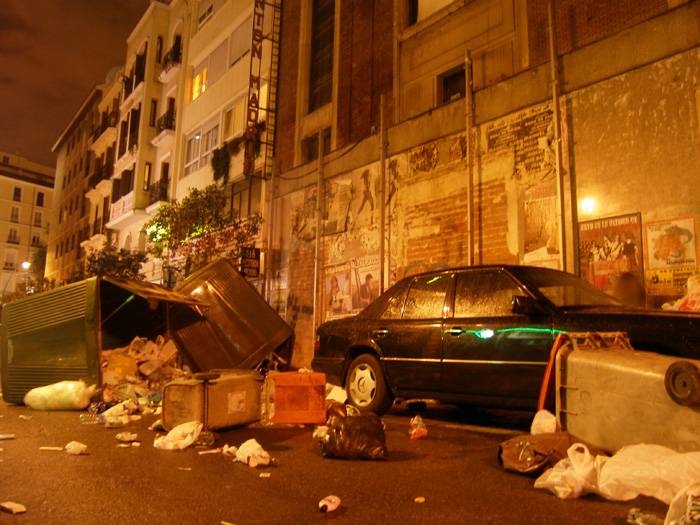