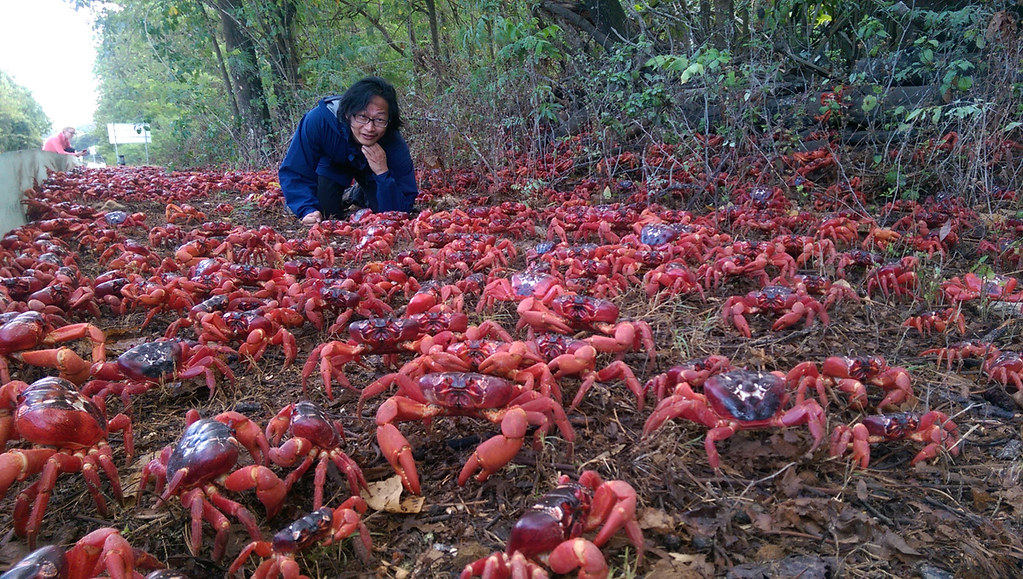 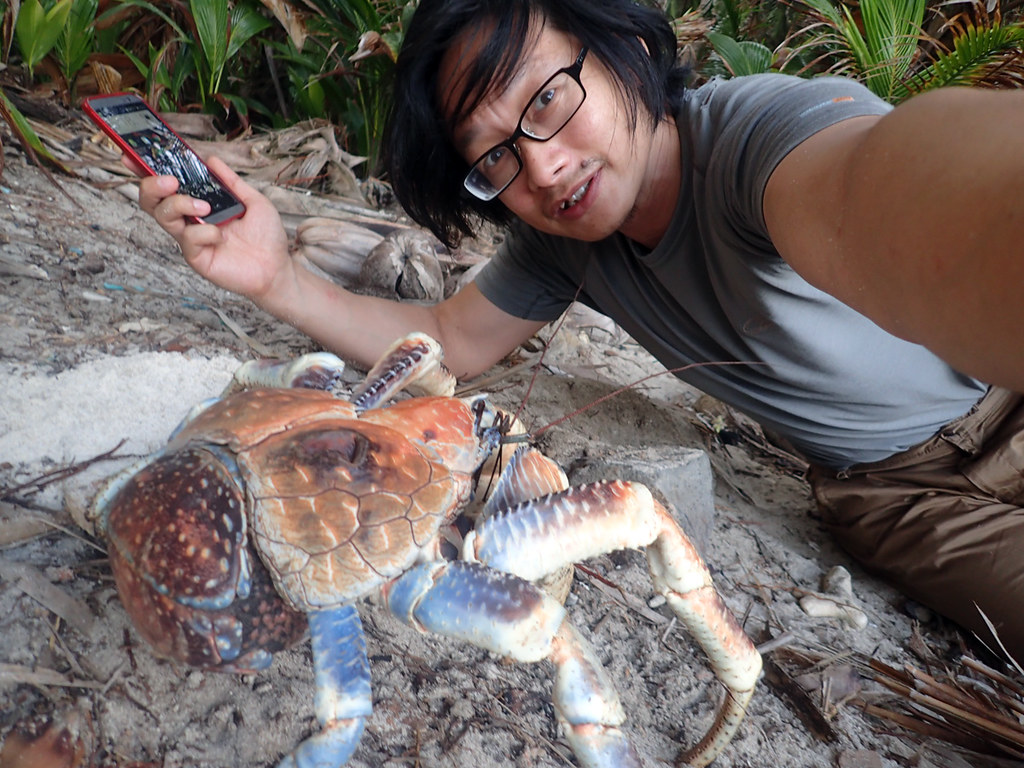 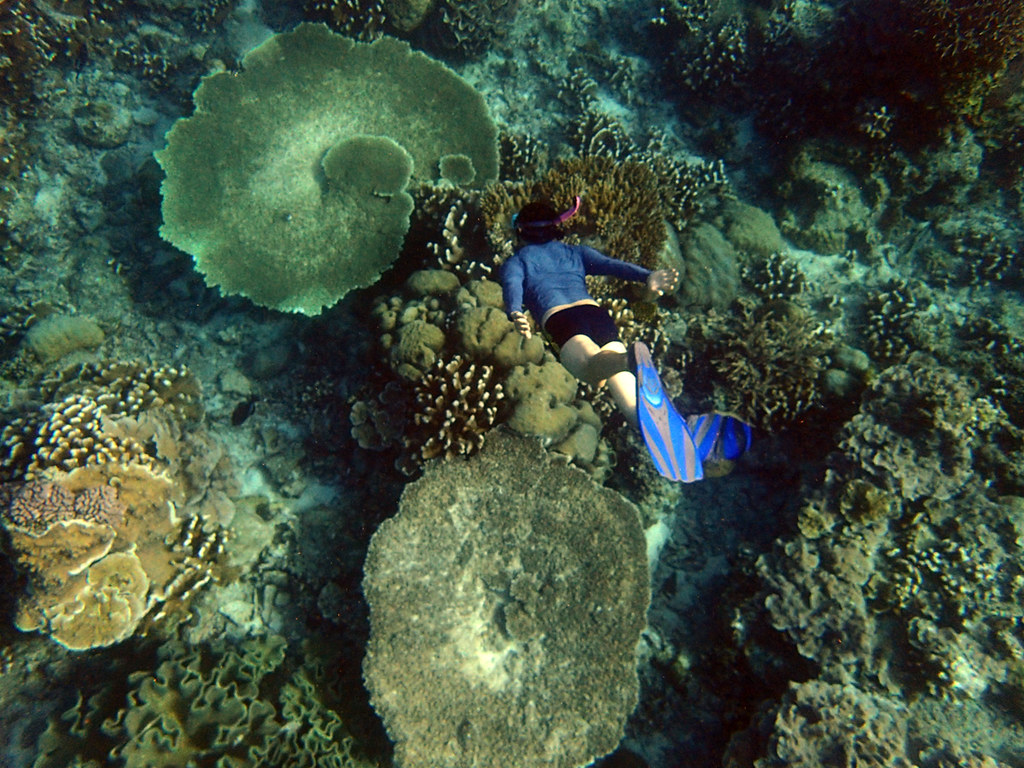 So it’s time again for another Cedavril and Kitson travel blog. Yay!!! And this time we are currently chilling for 2 weeks on Christmas Island in the Indian Ocean with our friend Tamsin.

Well… for all you non-Australians on our blog list, Christmas Island is this weird little island in the Indian Ocean somehow owned by Australia, but actually only 260 nautical miles away from Jakarta so geographically it’s actually more a part of Indonesia, even though you get here via Perth.

Now most Aussies couldn’t tell you where Christmas Island is located, but they’ll all know of it due to one big reason and that is because it is where our detention centre for illegal immigrants is based. It’s the closest Australian port to Indonesia so it’s where illegal boat people head when trying to seek asylum in Australia, so it’s always in the news for detention centre riots and protests.

In fact I’m typing this blog sitting by the pool side at the Sunset Hotel,which is a bit surreal since we are close to the centre of town, but just over the pool fence is the rocky shoreline where in 2010, 50 asylum seekers on the people smuggling boat The Janga died when their boat smashed into the rocks in monsoon weather.

But despite most Aussies just knowing Christmas Island as a detention centre, we’re here because it’s also famous for the little known annual RED CRAB MIGRATION where 50-130 million red crabs migrate from the forests down to the shore line to spawn every monsoon season. 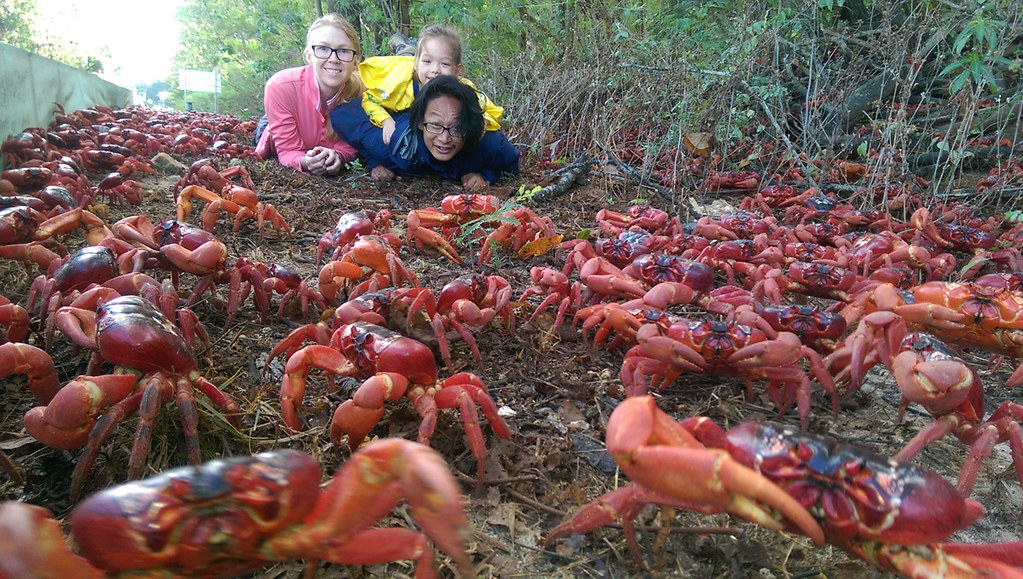 So anyhows back in 2010 when Avril was pregnant with Kitson we went swimming with whale sharks at Exmouth off the Western Australia coastline. And we heard that the whale sharks will often migrate up to Indonesia, but during the red crab spawning season there are so many red crab larvae that they often drop into Christmas Island to feed on them.

Holy crabbie patty… as soon as we heard that, we put the red crab migration on our to-do list and now, here we are!

And we’ve got to say Christmas Island is one of the MOST AMAZING places we have EVER been to! In actual fact it is now in our TOP 5 FAVOURITE PLACES IN THE WORLD and only second to Antarctica in our top wildlife experiences. Considering where we have been to… that’s a bigarsed rap from us!

Man these red crabs are simply amazing! Somehow these little dudes and dudettes have an incredible built-in superpower to read the phases of the moon so they time their migration to head down from the forest to spawn at the full moon when the tides are most favourable to drop their eggs into the ocean. 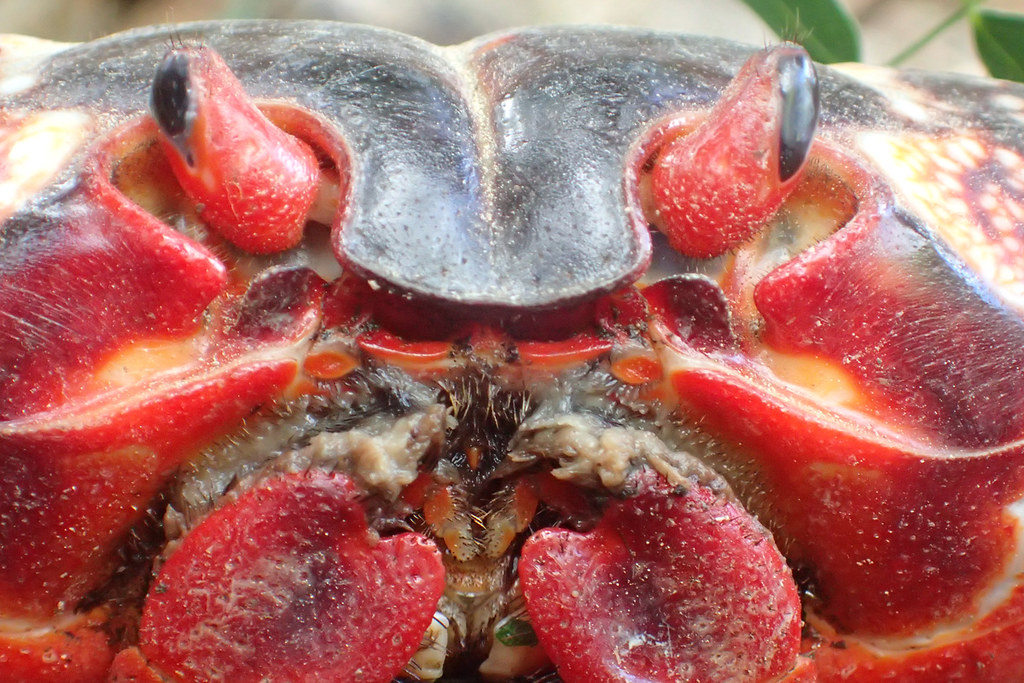 They generally migrate in a massive sea of red crabiness over 4-6 weeks anytime from October to January as soon as the monsoon rains start since they need the rains to move down from the forests otherwise if they get dehydrated in the harsh heat, they will die.

Now that’s a massive gamble for most tourists like us to try and time our arrival for the migration and we thought we had choked bigtime, since this year has been the driest season in years due to the friggin el Nino event. So it’s our first holiday ever where we’ve actually been praying for rain… and luckily we scored! And man did we score… since most people only get monsoon weather they don’t get to see much else on the island since they often close roads for the migration and also the weather is so crappy.

But we had perfect weather for the first part of our trip so we got to hike through amazingly dense forests to secluded beaches and treacherous rocky coastlines. We checked out beautiful waterfalls, scary blowholes, cave lagoons and we also discovered why Christmas Island is called Australia’s Galapagos because it’s densely populated with red footed boobies and giant frigate birds just like we saw in the Galapagos. 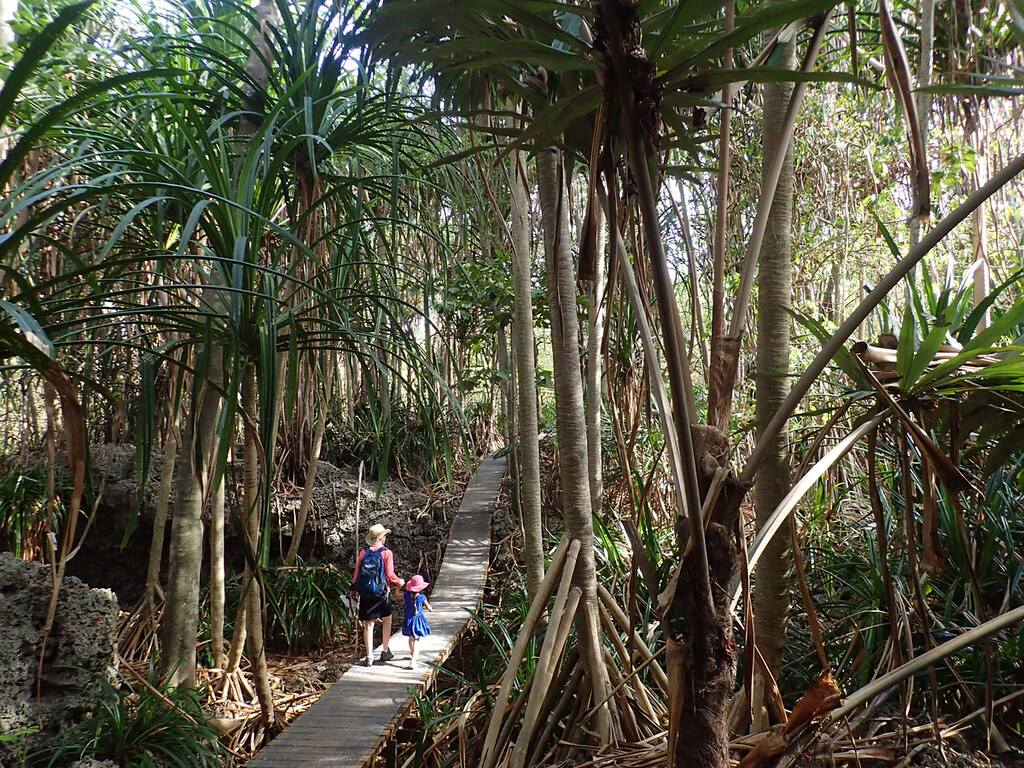 In fact we both personally think that Christmas Island actually surpasses the Galapagos as a more enjoyable wildlife experience… Big call I know… But check out our photos and see what you think.

Christmas Island is also an old volcano that shoots up from the Indian Ocean so you can literally snorkel 20 meters off the pier across beautiful reefs to the edge of a sea wall that drops 4km straight down into dark blue nothingness. Holy crap I almost pooed my pants swimming to the edge because it is seriously scary and I’ve watched too many sea monster movies. 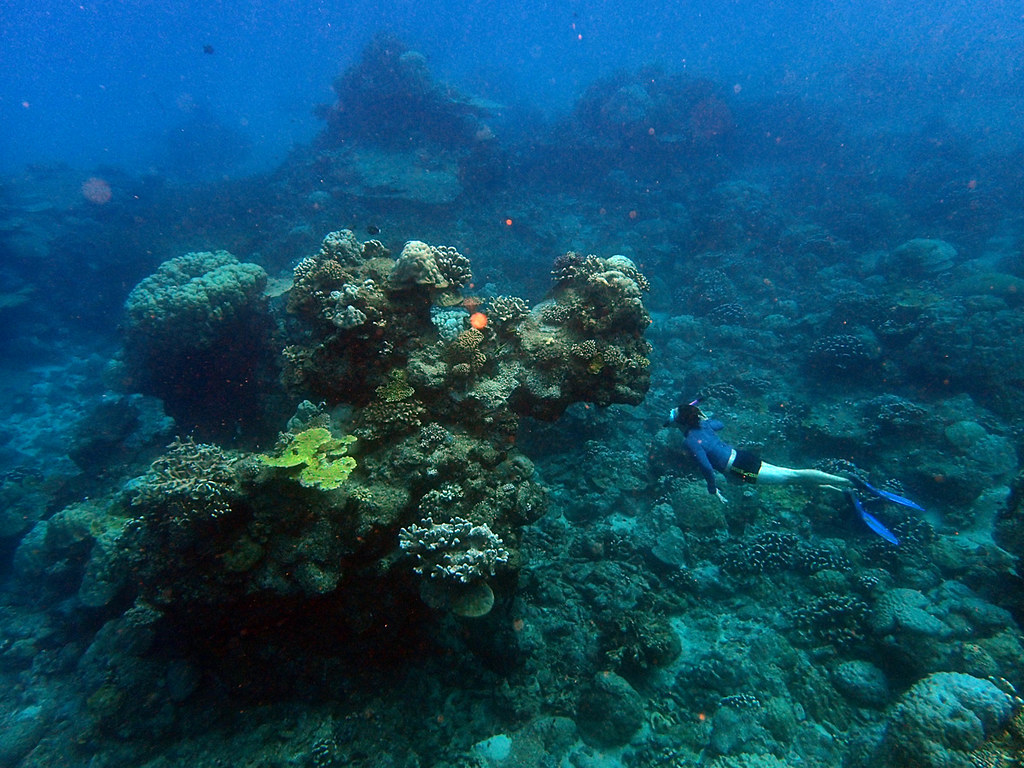 But half way into our 10 day trip it did actually start raining. And then HOLY CRAB… we went from seeing no red crabs to taking a zillion photos of us doing all sort of shenanigans in a SEA of red crabs.

The park rangers shut down roads and now there are even crab barriers, crab tunnels and even a crab bridge over the road. Saying that, they still wander all over the roads and we are now experts at crab dodging… er… except I did end up squishing about 5 crabs in our time here hence we did end up making some crab patties. 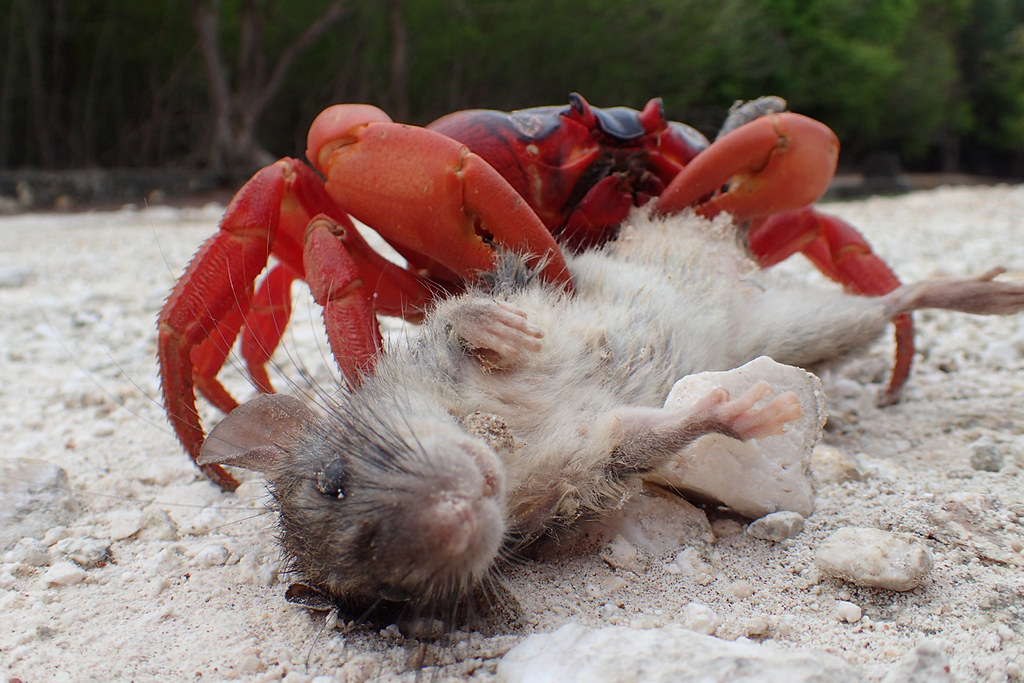 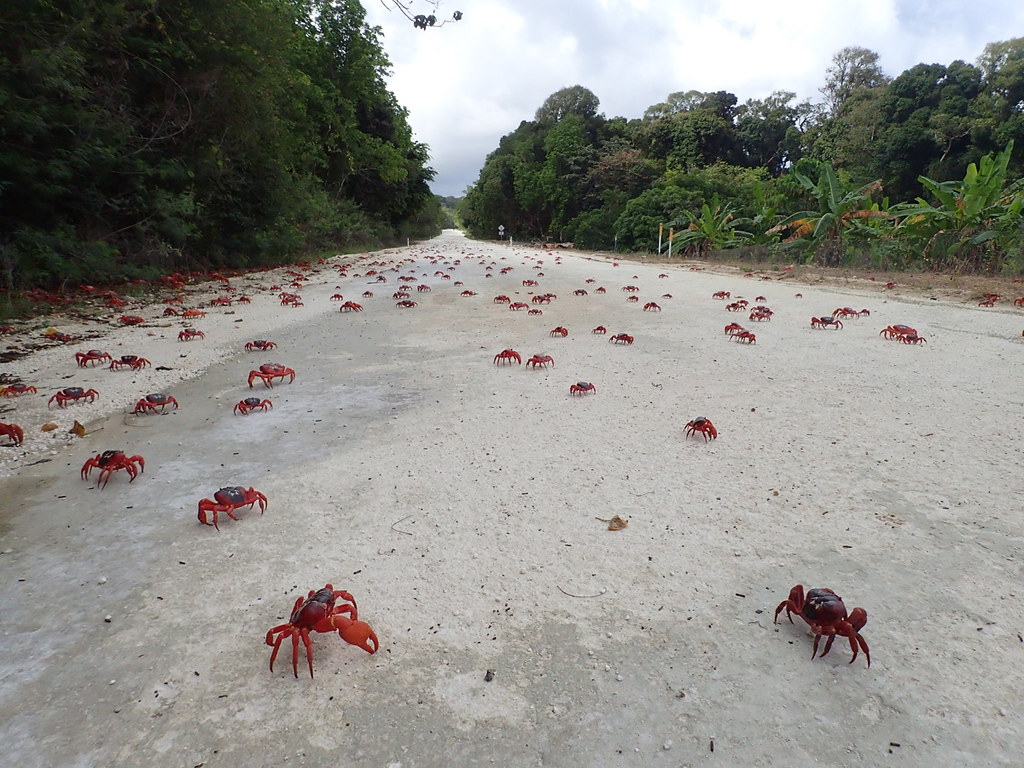 Not only that but there are about 20 different species of crabs on the island so there also blue crabs and purple crabs. But the crab that we have fallen in love with the most is the Robber Crab… also known as the Coconut crab. 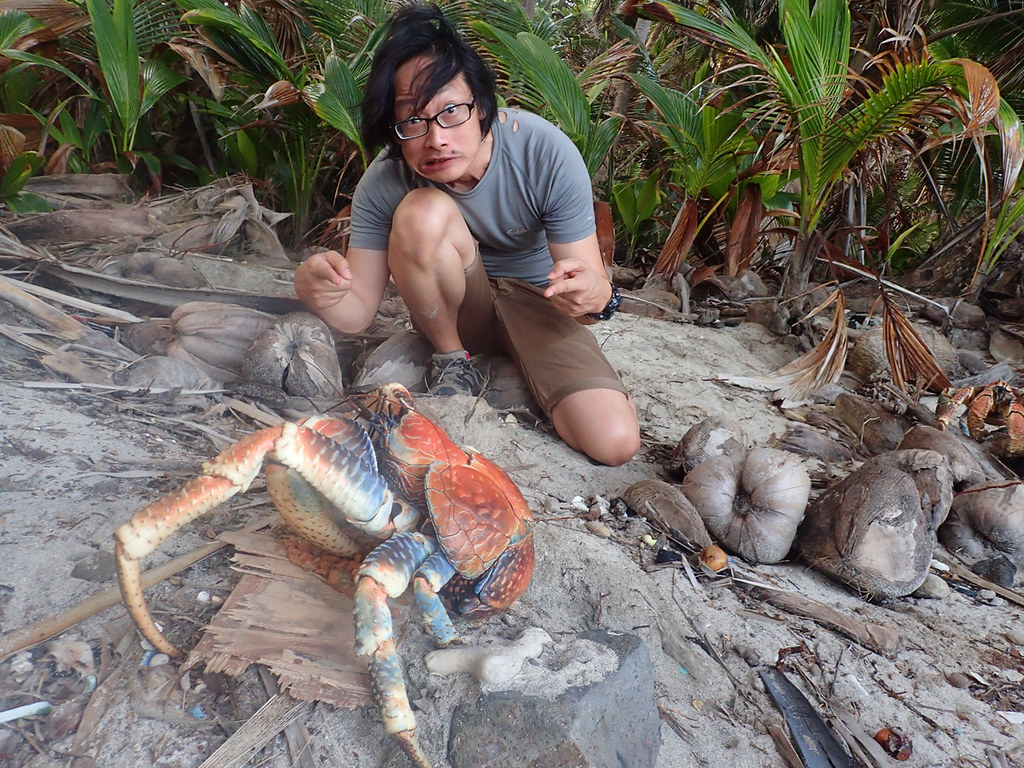 Man the Robber Crab is the largest terrestrial crab EVER!!! And ever since we saw this famous photo of the robber crab on the bin we’ve TOTALLY wanted to see one… and boy were we not disappointed.

They’ve almost been eaten into extinction on most islands, but here on Christmas Island they are protected so there’s a heap of them around and the island rangers go out of their way to protect them. They even paint a big pink ‘x’ on the road where each one is killed and document it by GPS.

We always thought we’d squeal like little girls and squirt urine when we saw one in real life since they look so scary like bigarsed prehistoric spiders… but when faced with one for the first time… man, they are so cute that we totally fell in love with them!!! 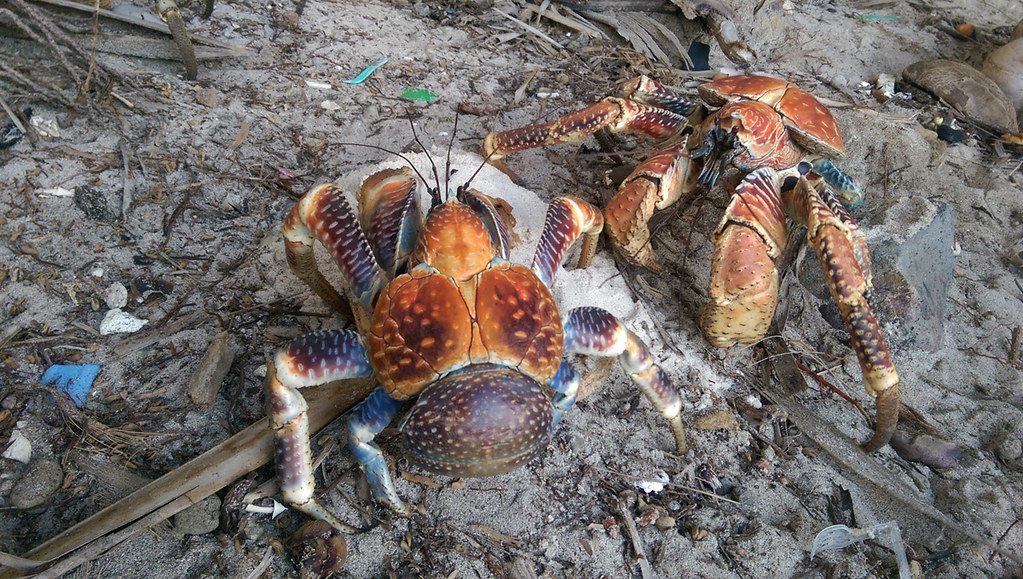 Man… they are like puppies. They are totally the gentle giants of the forest and can live to about 70 years of age and really create a beautiful sense of calm when they are around you… sort of like all big animals like whales, elephants and Mr Snuffleupagus. They are so prehistoric and cool that we totally want to be robber crabs when we grow up.

They are normally quite shy and will avoid humans but you’ll see we got a heap of amazing up close photos of them because we cheated. We found out that they have a sense of smell 90 times more powerful than a dog so we managed to use cat food and coconuts to attract about 21 of them to us down at a place called Dolly beach where they like to hang out. They became so docile that we could pat them. Man we were so enchanted that we thought nothing could break the spell…

…er… until Kitson had to take a shit on the beach and the robber crabs decided that was an awesome meal to have as well!!! Eeeewwwww… some vomit just came up in my mouth as I was typing that. 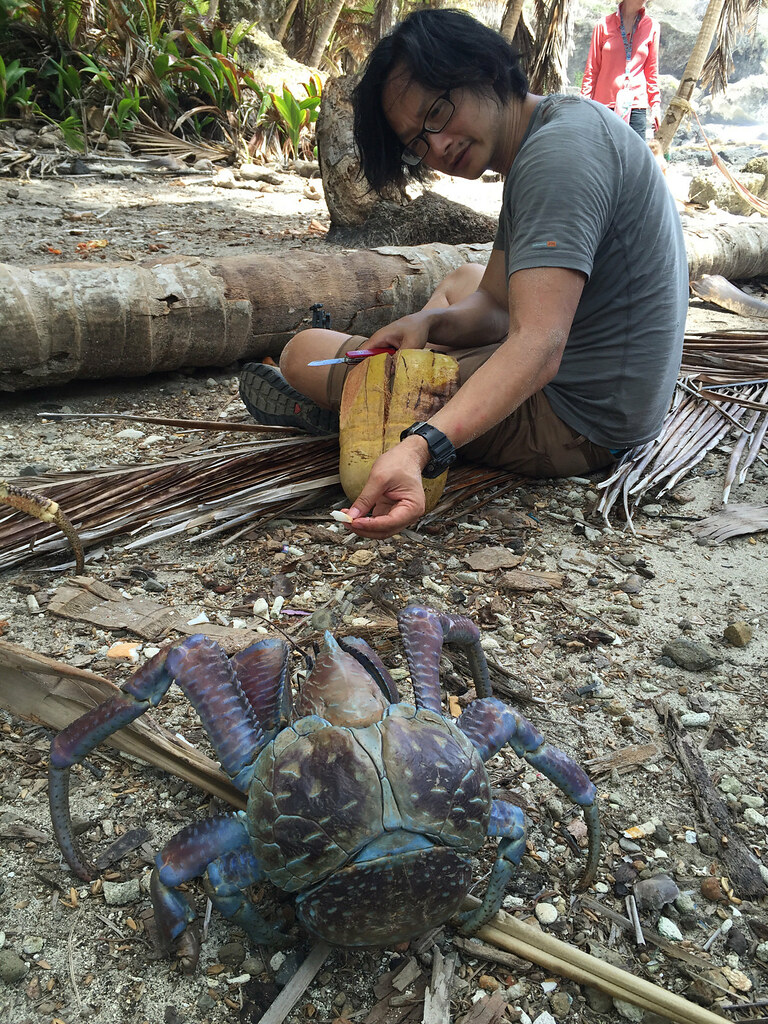 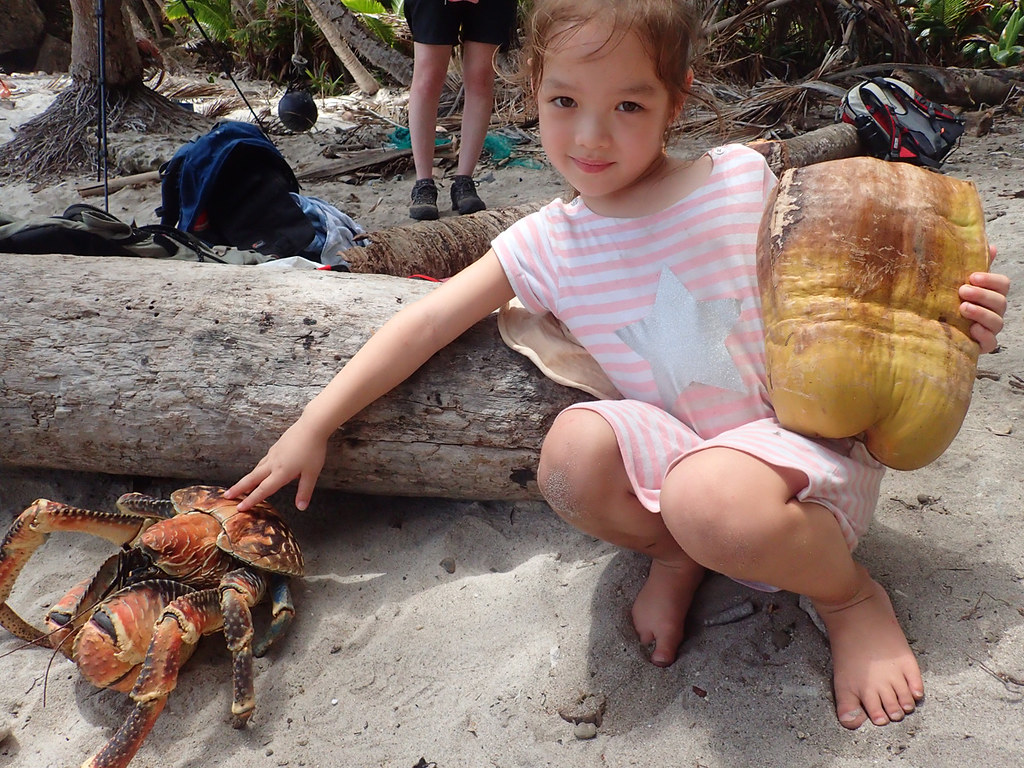 And so Christmas Island has now joined our top 5 favourite places on the planet list. Man… this place is a well kept secret and it’s amazing to us that we were amongst under 100 tourists on the island. We met a heap of locals who were completely stunned that we were on the island as tourists since most of the visitors were generally workers for the detention centre, border force, the Australian Navy or for the phosphate mines which is what the island is more famous for.

But Christmas Island blew us away with how interesting it was. And just like red crabs, blue crabs purple crabs and robber crabs all living in harmony, the population of around 2000 locals is a really harmonious mix of Chinese, Malay muslims and westerners all living in harmony. There’s actually a muslim area called Kampong with a mosque, several Chinese areas with temples all over the island and western areas… And of course the food was mainly Asian and awesome!

On the surface the urban areas are quite unattractive as it’s still an operating phosphate mine so it does look really industrial and the most buildings are weather worn, paint stripped concrete buildings… but man the whole place is still really charming.

And the people were the friendliest, most welcoming community we have ever come across. We heard so many stories of people who came for 1 year but ended up moving permanently to the island. Man we reckon we could live here too.

And it was also really cool watching the Ocean Shield Border Force ship and navy ships doing their thing in the same bay that we were snorkelling in.

Anyways, this would have to be one of the longest blogs we have written but that’s because we were truly blown away by this place. We are definitely going to have to come back another 2 times in the future though because now that we have seen the migration, we also have to come back to see the spawning and then the baby crabs migrating back to the forest.

We’ll be home by the time we send this blog out since the internet was so crabby that we didn’t get to upload any photos.

We’ll send out a proper Christmas cartoon once I get off my butt to draw it.

Lots of love and crabiness.

PS So our photos are at this link. There’s a shitload of crabby pics so don’t look if you are crabophobic

PPS If you are interested in knowing more about the red crab migration the Christmas Island Tourism website has a nice blurb and video at the bottom of the page. And here are some links to other cool mini docos including a nice behind the scenes video on how the parks office plans for the migration. I might cut together a video of our trip sometime which I will link to our blog

PPPS And we’ll eventually write up a travelling tips blog on our website www.cedavril.com and if anyone is keen on going one day then speak to us

PPPPS There’s no bird photos since we didn’t bring a telephoto lens and birds just aren’t as interesting as crabs. Check out our Galapagos pics for those.