Well we just got back in Brissie last Tuesday only to start moving furniture and sandbagging our house getting ready for the category 5 cyclone flood that was meant to hit us yesterday… but never happened.

However, what better usage of time while waiting to be flooded, than to write a travel blog and edit a rap music video clip!

So as you all know, I have a long history of becoming stupidly immature and juvenile when I go to the snow, and several of my dumbarsed superhero identities were developed on snowboarding holidays such as Armour Plated Arse Man, Darth Cedrus, Mankini Man, Don’t Fall Off The Chairlift Man, and The Remarkables Superhero experience…

And as you may also know Ced’s plan in life is to become more immature the older he gets… But with such a great life philosophy comes the terrible burden… How to beat my last effort and become even more immature and more of a dick everytime I travel?

Now also running a funny travel blog website is another burden since you can’t just wait around for the LOLs to happen… man… sometimes you just need to MAKE that funny shit happen!!!

But sadly we left Australia in such a rush… that I had no plans to bring the LOLs on this trip, so these terrible burdens weighed heavily upon my heart.

And of course we’ve already been to Japan so travelling around is a bit blah for us… You know… shinto temple… blah blah… sushi… blah blah… shopping… blah blah, hello kitty… blah blah, weird kinky shops… blah blah… So trying to do weird stuff and looking for the LOL’s was becoming harder to find.

So when we were in Taiwan I sadly emailed my mate Steve at home and told him that the only LOLs I could think of was to wear Zentai morph suits while snowboarding. Luckily he quickly wrote back and said “WTF!? You fucking lamearse… this is Japan!!! Dressing up in Japan is friggin mainstream and zentai morph suits… well that’s so Power Rangers… we need to get Zentai FAT SUITS and friggin sumo it up!!!”

HOLY CRAP dudes! He was right!!! How could I be so pedestrian??? Fat suits… guaranteed LOLs!!! 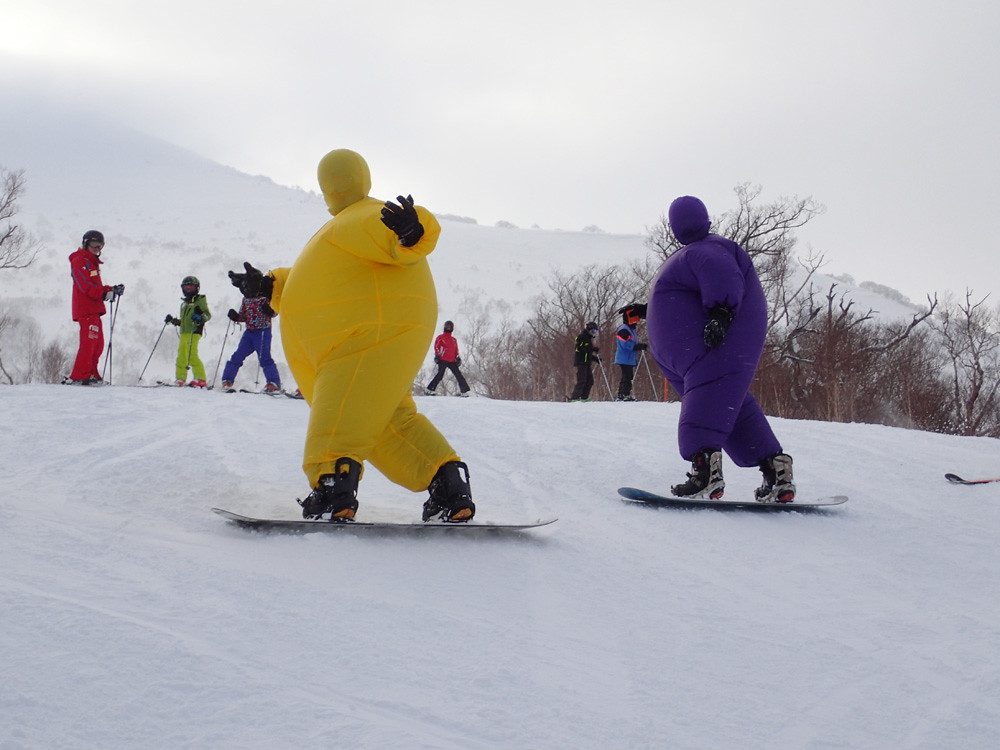 Fat suits taking the Tokyo subway from Akihabara to Shinjuku on the busy Chuo line at rush hour… CHECK! 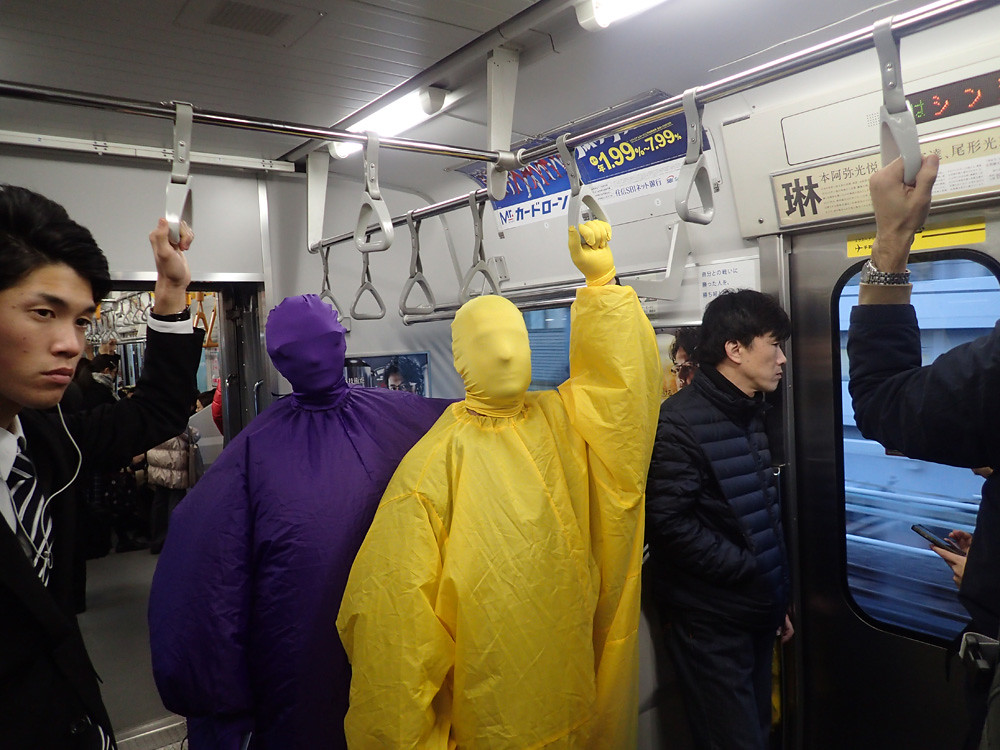 Fat suits on an ice slide at the Sapporo Snow Festival… CHECK! 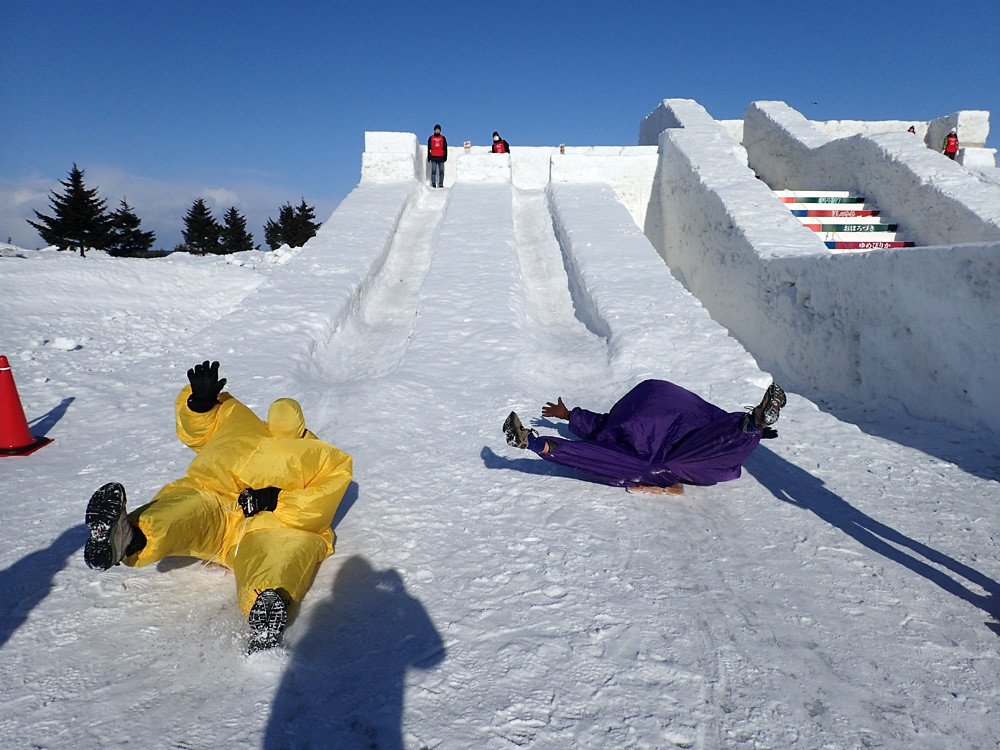 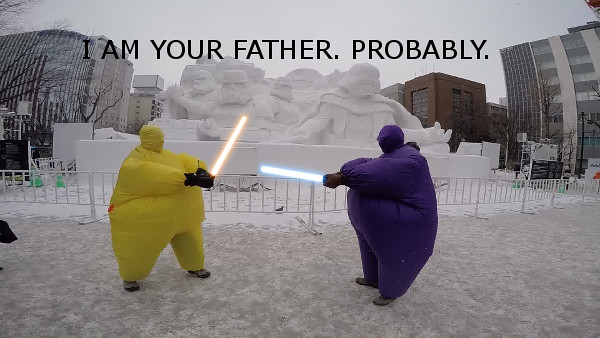 So here it is!!! This is the link to the Youtube clip of possibly the funniest shit I have EVER done!

Now because Youtube is a bit lame with music copyright issues and doesn’t allow the clip to be played on mobile devices or in some countries… if you can’t view it, I’ve also uploaded it to Vimeo here…

BTW I’m purple and my mate Steve is yellow. Pump up that volume and watch it loud!

PS Now I’ve screwed myself for the next snow trip. I don’t think I can beat this effort

PPS Oh yeah Kitson learned to ski this trip too and picked it up easily. The only issue was I had to crack her elbow back in after it was dislocated but that was from another girl pulling on her arm in play group… not skiing. Actually she skied all afternoon with a dislocated radial head so I was pretty proud of her

PPPPS Oh yeah again we did do other cool stuff like The Robot Restaurant in Shinjuku which was weird and also we checked out the whale shark in the Osaka aquarium which I found a bit sad. We also went to Disney Tokyo which was terrible.

PPPPPS Let us know what you think. So I can now add rap video editing to my list of many superpowers YAY!