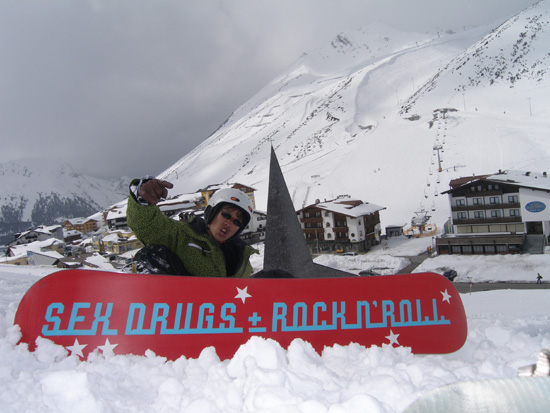 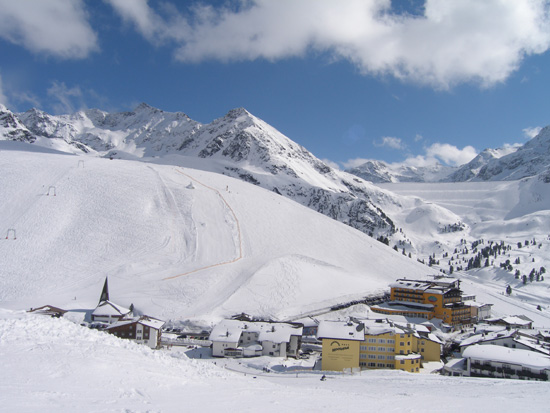 Gruss Gott to all you snow bunnies and wacko spackos

Well, we are currently in Innsbruck, Austria which is the famous winter Olympics town in the Austrian Tyrolean Alps, and yesterday in the ski village of Kuttai, I had one of the most spastic, lamearse, limb threatening snowboarding accidents EVER!!!

Now I had always imagined that my first ever limb threatening snowboard accident would be this TOTALLY AWESOME snowboard jump off a 200m cliff over 7 helicopters… while dodging KGB hitmen on snowmobiles AND outrunning an avalanche!!!

However, all my romantic dreams of having an amazing snowboard stack were COMPLETELY trashed when… Holy cow… I …er… um… simply fell 3m off a chairlift… flat on my face!!!

Now for those of you who have never snowboarded, basically you get on a chairlift with your left foot strapped in on the front binder of the board, while your right back foot just dangles free.

Then as you are approaching the get off area, you need to angle your body sideways to get the board pointing straight ahead with your left foot forward and your right butt sitting on the chair so you can simply slide off the chair when you arrive… and of course you need to hold onto something so that you don’t topple off.

However, about 15 meters from the get off area, I had turned my body to the side and was resting my right buttock onto the seat with my left leg dangling down and I reached back to support myself on the backrest of the chair so I wouldn’t topple off… BUT the friggin backrest flipped forward and I toppled off the FUCKING chair!!!

Now as most of you know, I live and draw my life like a cartoon character… but FECK me!!! This is the first friggin time that I’ve been like Wile E Coyote!!!

HOLY COW!!! I TOTALLY fell face first with my hands near my ears and my legs spread like a frog due to the weight of the board… And to give credit to old Warner Bros cartoonists… when you see Wile E Coyote fall off a cliff and go splat like a frog… well that’s EXACTLY how you friggin fall!!!

Well, the chairlift operator must have also been stunned as he stood up and just stared incredulously… and he actually hesitated before turning off the lift and then trudging down the hill to help me up. He obviously had a moment where he thought he was on candid camera or something, since I’m sure he couldn’t believe what kind of lamearse tosser simply FALLS off a chairlift!!!!

And of course my mate Greco who was watching from below and saw the whole thing, did what all good mates who are concerned for their friend’s welfare do… He LAUGHED his friggin head off… and said it looked like I deliberately dived off the chairlift, so it was one of the funniest things he had ever seen… fekkin fekker!!! 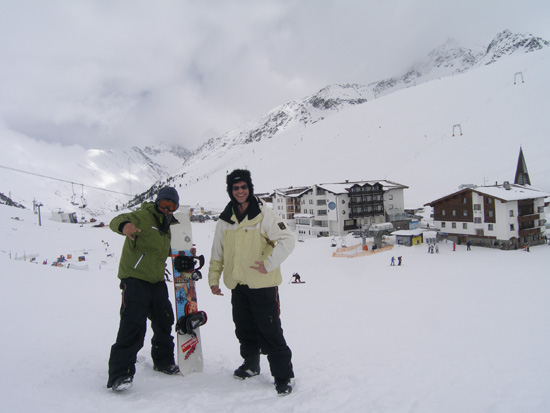 Anyways, the snow was surprisingly soft and I was lucky that I didn’t land on my head and crack my neck… so I got away with no major injuries…

But the funny thing was, that just before I got on the chairlift, there was a school group of about 20 five year old kids and only 2 teachers, so they were asking responsible adults to help chaperone a kid up on the chairlift… presumably so that they could have an adult make sure that the kids didn’t fall off…

Well, they asked me as well, and maybe it was the fact that I didn’t speak German, or maybe it was the fact that I had “This lamearse fekkin tosser is NOT a responsible adult, and is so spacko that he will probably fall off” tattooed across my forehead… but the teacher then said not to worry about taking a kid with me… Which as you can imagine is VERY fortunate… ALTHOUGH it would have been PISS funny to see the teachers’ face if I did fall off with a kid as well!!!

Anyways, we’ve been giggling ourselves for days over this, with only a brief interlude when Greco accidentally tripped up a girl on the bus with his toboggan harness… and she fell flat on her face…

But to our credit, we waited until she got off the bus before we laughed our heads off, much to the disgust of all the other travellers… um… But she did kind of deserve it though as she had thrown a snowball at us earlier in the day… man… we are so badarse!!!

Well, all in all, the sun was out and the snowboarding was awesome and I did go onto have some truly impressive stacks including a high speed toboggan accident that we captured on film, where I ran into a huge snowman that I didn’t realise had turned to ice so it was like hitting a brick wall… So needless to say, I am now sitting here nursing a sprained shoulder.

Anyhows, tomorrow we are off to M-M-M-My Verona in Italy which is the home of Romeo and Juliet, and then we’ll meet up with Avril and heading to Switzerland before going home on the weekend.