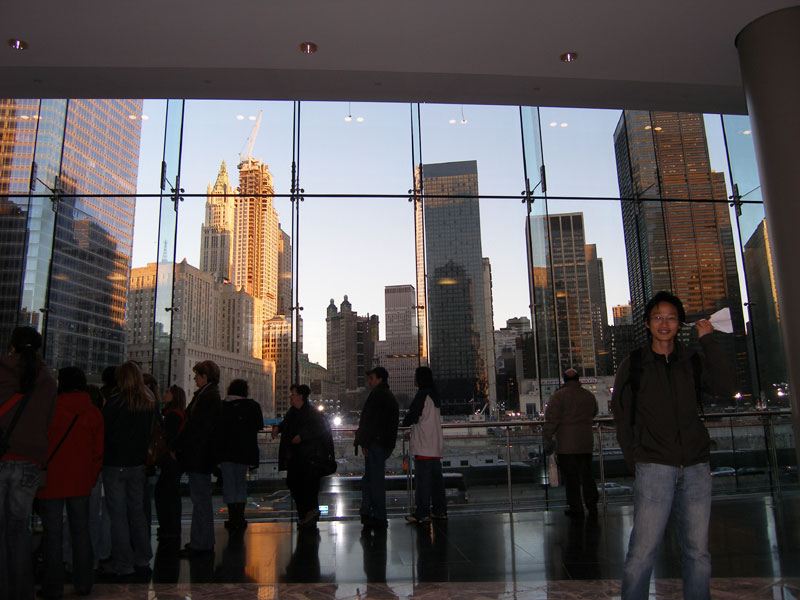 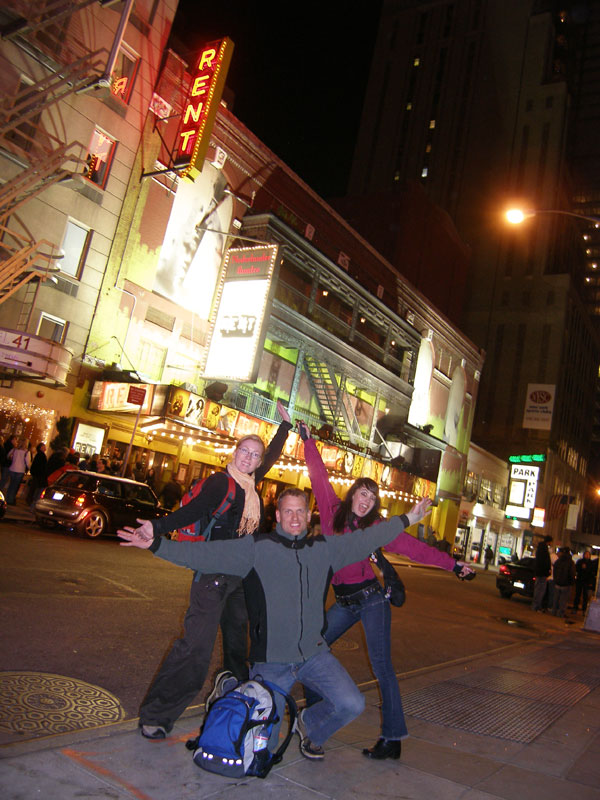 Hey there to all you New Yorkers, New Porkers and Big Apples…

Well we are currently at JFK airport in New York about to head back to Ireland after having 8 fantastic days in the Big Apple, and all we can say is that New York is DEFINITELY the greatest city on Earth.

Man… even though we have been here before, stepping out of the subway into the neon lights of Times Square still blows us away EVERY time! 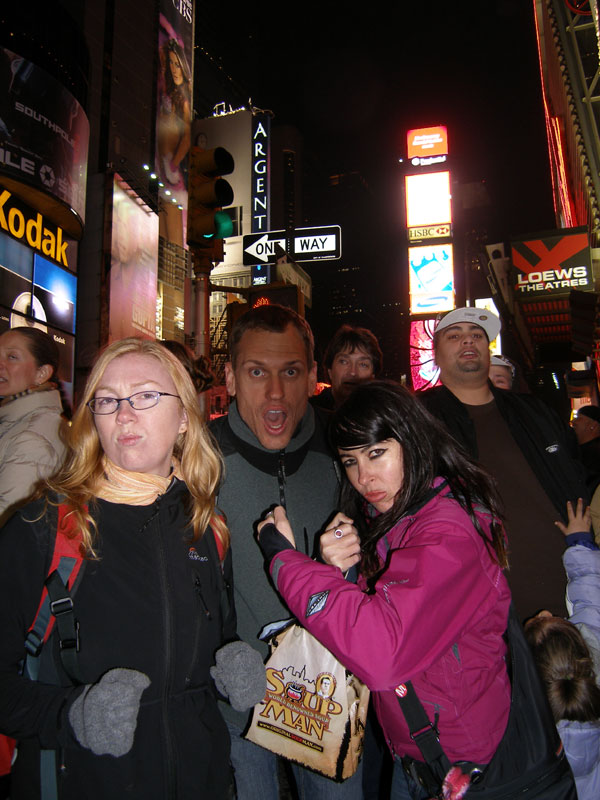 And the last time we were here 8 years ago… although we made it into the audience of a Ricki Lake show… we were absolutely broke, so we otherwise couldn’t do many cool things since we were so poor…

But this time since the Euro is so strong against the USD, we completely splurged it up and bought heaps of gear for our upcoming Africa trip. And Avril has now bought a Canon Rebel XT/350D digital SLR, so you can now expect our travel pics to be much more arty farty! …Man… we definitely shopped until our bottoms bled!

And quite by accident we arrived just before Thanksgiving Day which is a 4 day weekend starting off with the huge Macy’s Thanksgiving Day Parade and following it up with Black Friday, the biggest sale and shopping day EVER, which is a spectacle in itself.

Now… because I am always happy to get a Pecker on my Wood, I was also pretty keen to get to the Macy’s Parade to see the big Woody Woodpecker balloon. But unfortunately, it was pissing rain and miserably cold the whole day so we actually didn’t get up early enough to see MY woody, let alone the BIG Woody Woodpecker.

But we did however get to see a big Super Grover, Garfield and Pokemon floating between the skyscrapers, which were actually pretty impressive and reminded me of the really dumb joke… 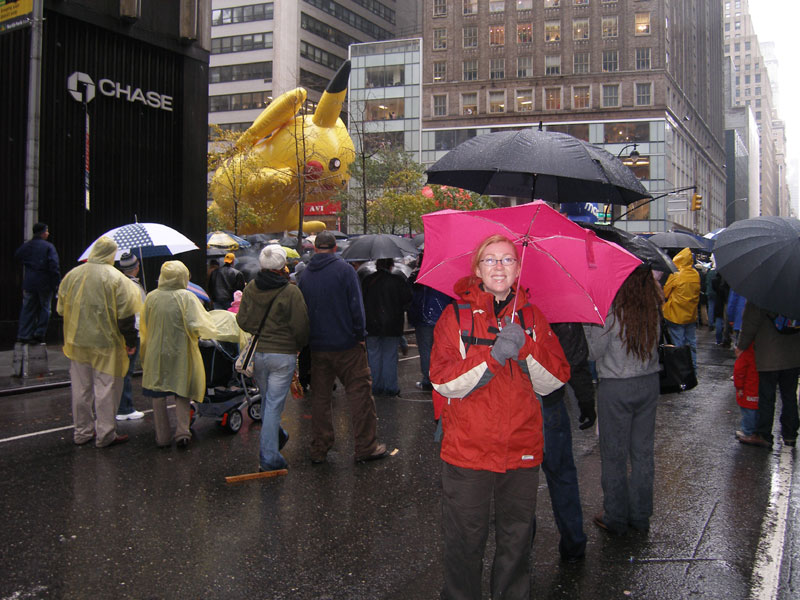 Snigger Snigger… Snort Snort… OK… that’s probably only funny if you’re a bit retarded, stoned or under the age of 10… Or all of the above…

Anyways, New York was one of the most fun times that we have had for a while, and we had a huge amount of fun just hanging out with our friends Dom and Andrew from Australia, and completely accidentally I also caught up with another friend Greg Rudolph and his wife who I have known since I was 5 years of age but hadn’t seen for many years. 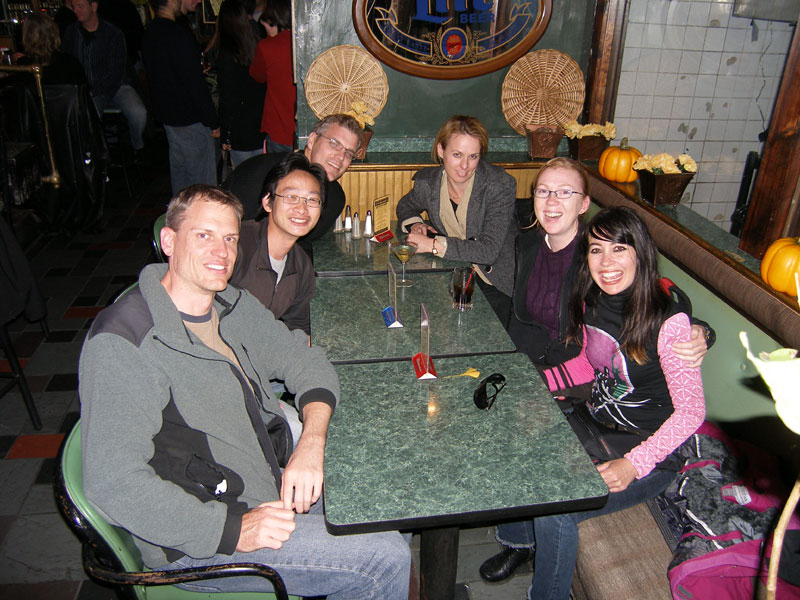 It was all really cool since New York is such a funky place to explore with friends and of course we did all the usual things like getting distracted by cute squirrels in Battery Park, doing obscene things with the charging bull on Wall St, catching Rent the musical on Broadway, and cruising the Staten Island Ferry, Rockefeller Centre, and Central Park where Dom went ice skating… 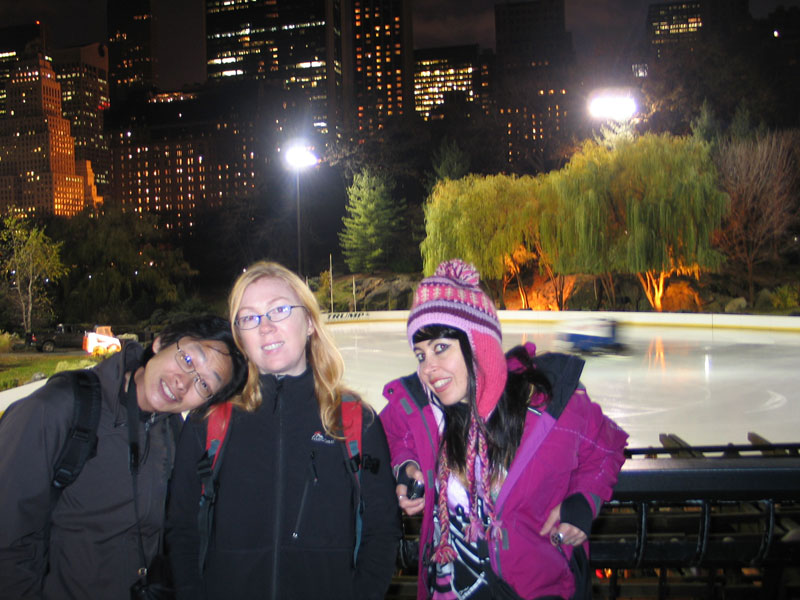 And for those of you who know Dom, as you can imagine, most of the time was spent reciting lines from Seinfeld and Ferris Bueller, trying soup from the Soup Nazi and humming the theme to Welcome Back Kotter and various other bad New York songs from the 70s and 80s. 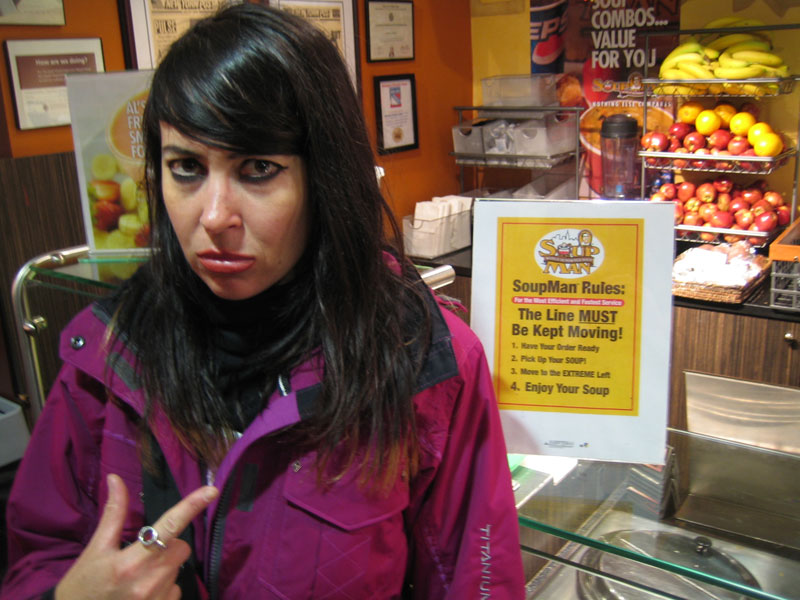 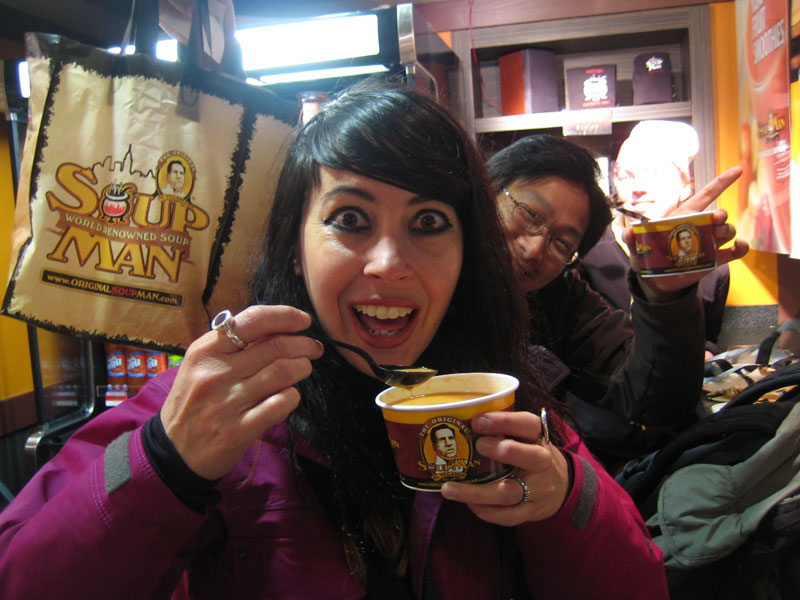 And even though Dom and Avril both have formidable shopping superpowers, thankfully they were both restrained in buying New York clothes otherwise they would have looked so Soho’ho!

In fact the only downside of going to New York is that we have now discovered that we are suffering from a brand new syndrome called Expat ENVY!!!

Man… We’ve been staying in Brooklyn with some friends of ours Kim and Damien who are from Oz and who did a 1 year world trip similar to ours in South America and Egypt, but who settled in New York around the same time that we settled in Ireland. 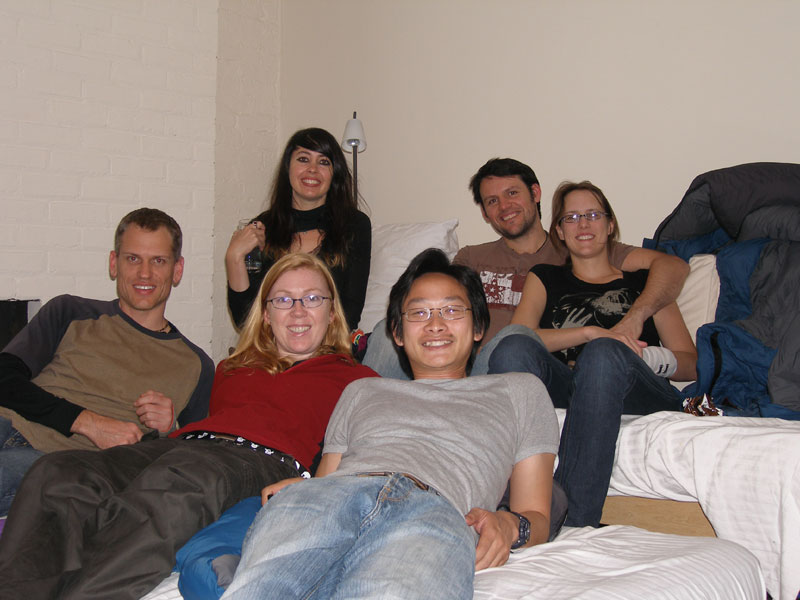 But instead of sitting huddled around a fire in a cold damp house in rural Ireland wishing there was something to do other than sit in a pub and speak shit with the locals… these guys are living it up in Brooklyn and hanging out in cool restaurants and cafes, going to awesome concerts, seeing amazing museums, getting cheap trips to the Bahamas, seeing cool Broadway musicals and air punching Will Smith on the set of his latest movie!

Not only that, but since New York is such a multicultural place, it’s almost like you can travel the world in a day just by walking through the boroughs, so they have so much to see and do that we are COMPLETELY jealous!

And since having an Aussie accent in the US is like having superpowers they have automatically got a level of respect which is completely different to the UK and Ireland where there are so many Aussies, that we are scum… especially when we beat them at cricket and football!

Anyhows, we’ll get over our expat envy since we’ll be in Africa for 2-3 months starting on January the 3rd and since this is the lowest our budget has ever been, we are off to Ireland for a final 5 weeks stint to get enough money to get us to Africa and then HOME in April… Yay! Believe it or not, we are both getting a bit homesick now.

If you are bored, there are some New York pics at this link, but most of them are just pics of us being immature and silly… although you can get a glimpse of Avril and Dom’s new Tokidoki handbag which is the best chick magnet bag I have ever seen! 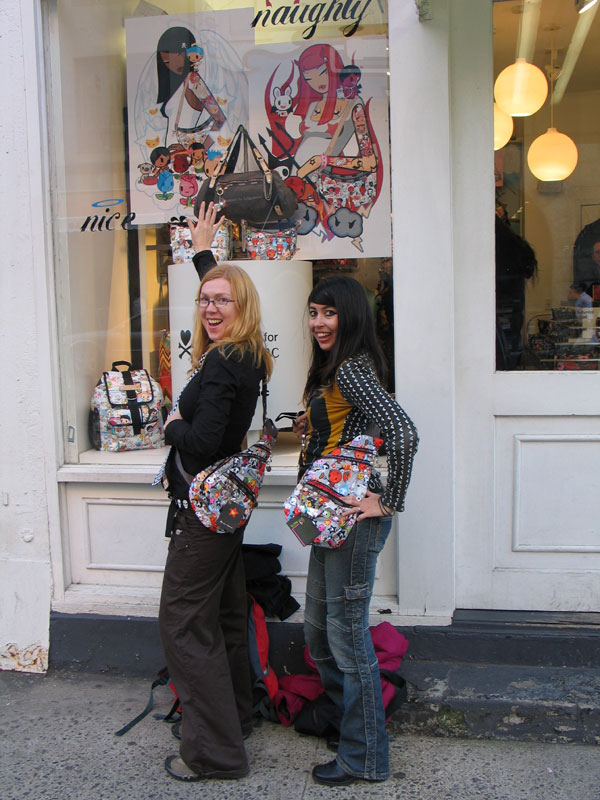 Gotta go as the battery on the laptop is starting to choke.

PS Thanks heaps to Kim and Damien for letting us crash at your place. You guys are the MOST adventurous people we know and you ROCK!!! But you also SUCK and we are very jealous of your life! Hope your wrist gets better soon Kim!

PPS There are so many things to do in New York that you can get lost in it all, so if anyone is going, here are some tips and some of things we thought were cool. The Wired gadget display shop, Kid Rocket designer toy shop and Evolution science shop in Soho were all VERY cool. Top of the Rock observation tower in Rockefeller Centre was cool. The Bodies exhibit with preserved human dissected bodies was extremely cool. B&H Photo on 34th and 8th run by traditional Jewish guys is one of the biggest and cheapest camera and tech shops in the world and almost a tourist attraction in its own right. The promenade in Brooklyn has a fantastic view of lower Manhattan. TKTS have a booth near South Street Seaport which seems to be less busy than the one in Times Square for cheap Broadway tickets. The Soup Man (Soup Nazi) soup is actually really good! Bank of America is the only ATM we found that doesn’t charge commission on cash advances. You can google the addresses of all the above places because I am too lazy to look them up.