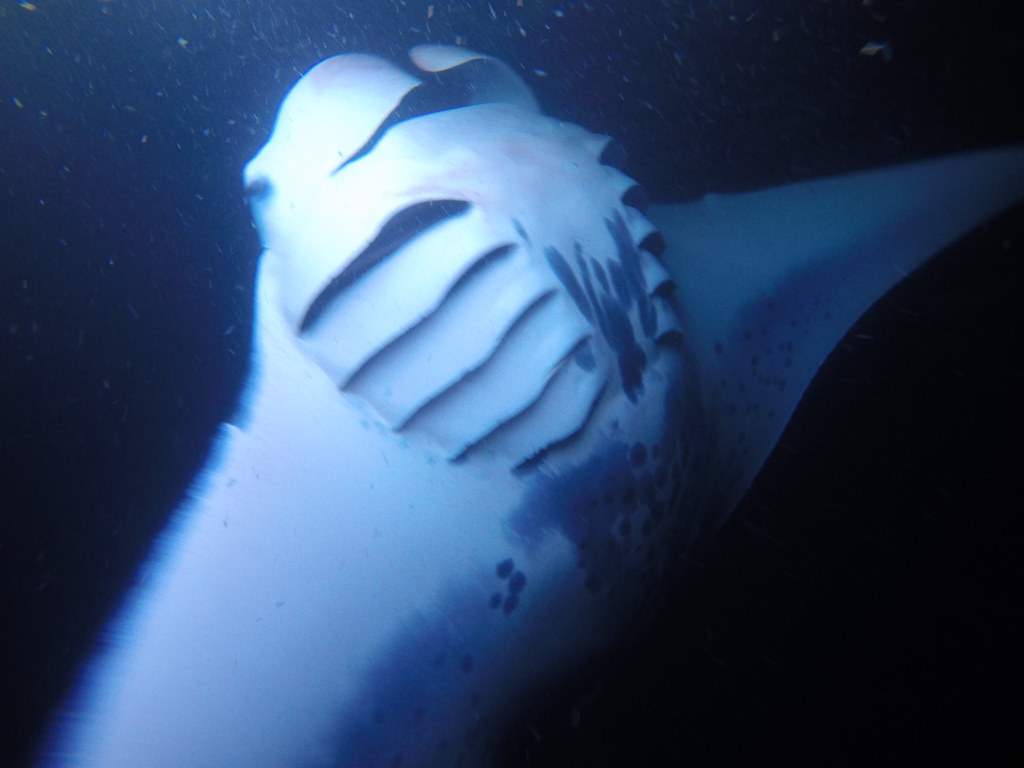 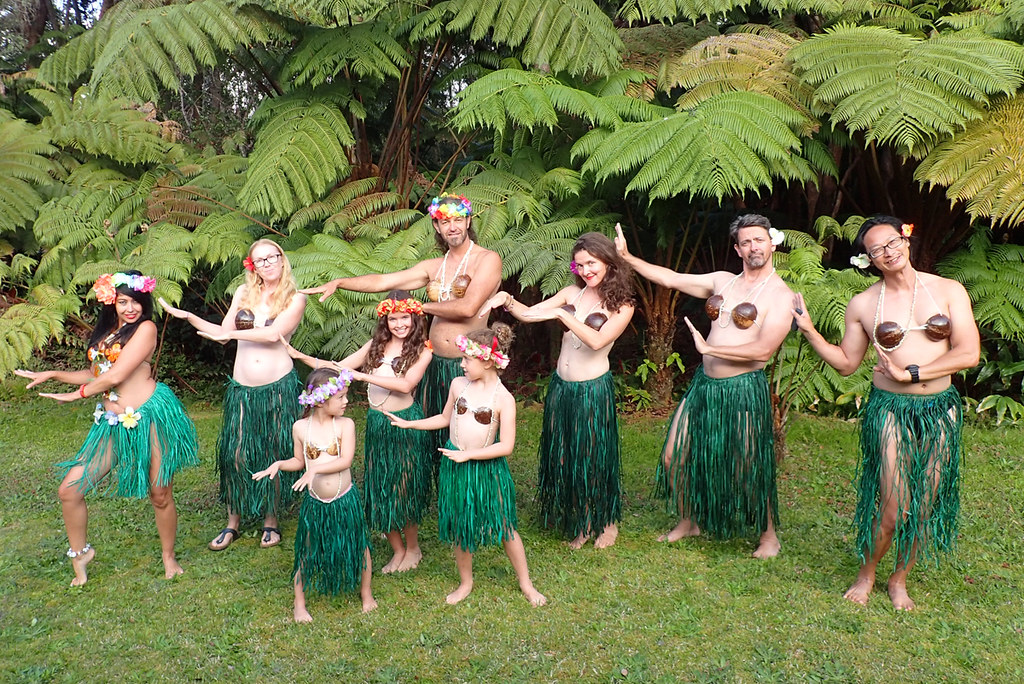 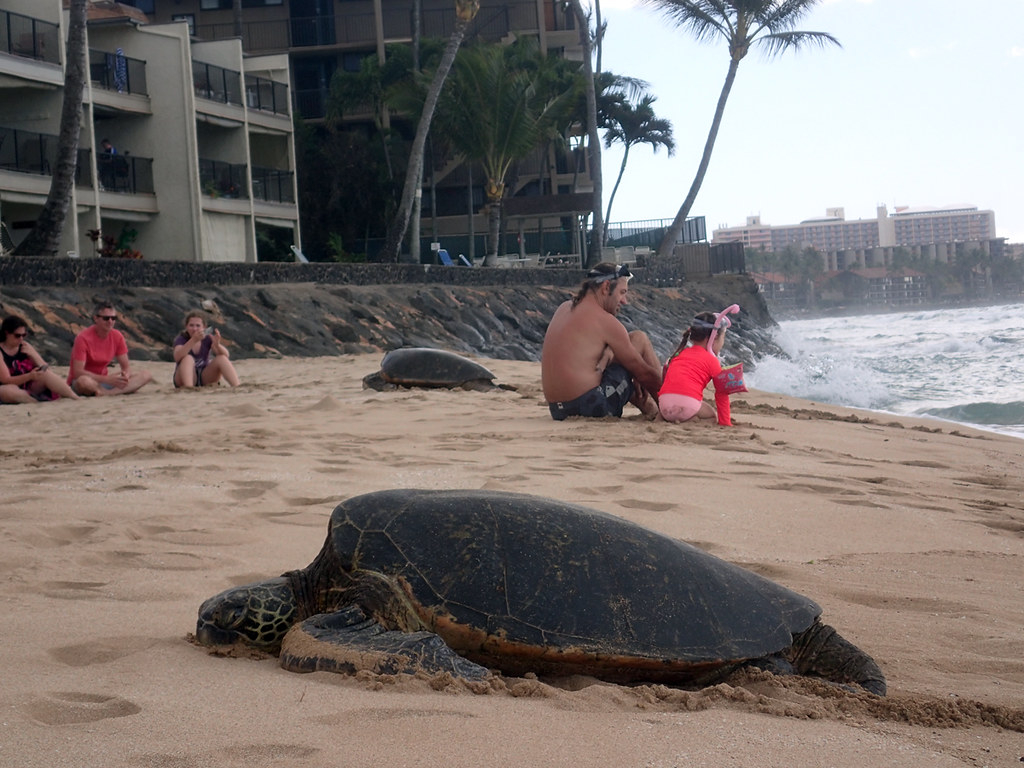 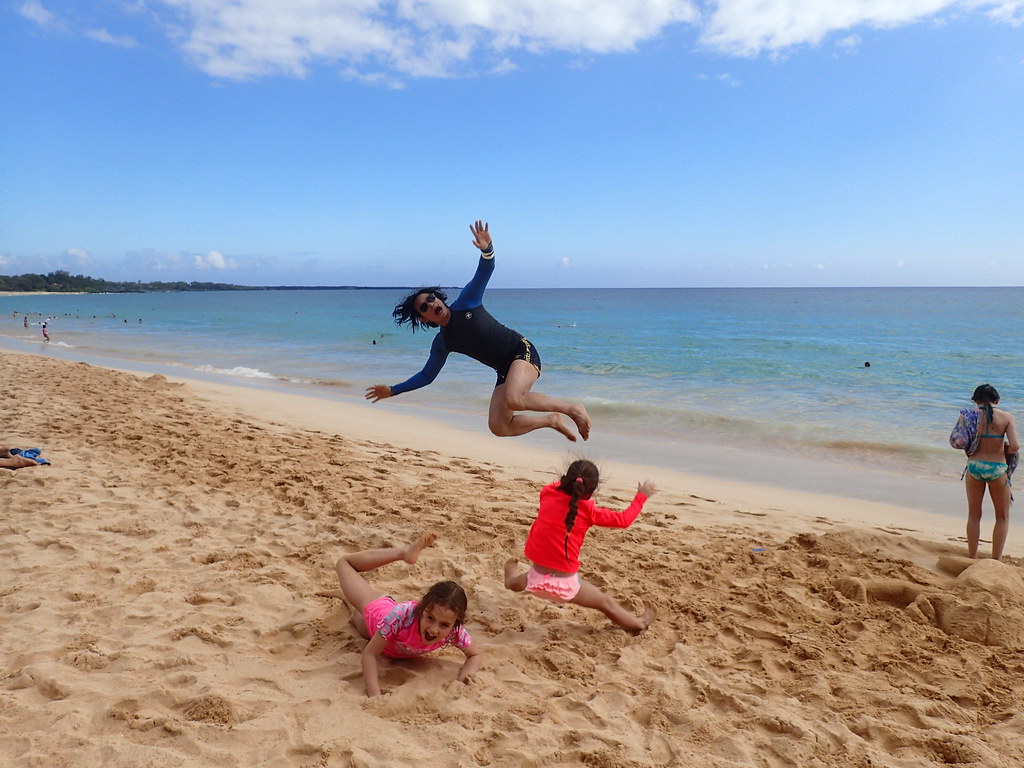 Well like we said in our last blog, we are currently in Hawaii for our mate Dee’s Hawaii 5-0 50th Birthday.

But it’s 11pm and we are currently sitting in our condo at Kailua-Kona on the Big Island of Hawaii and man… I’m way too pumped to go to sleep since we’ve just gotten back from one of the coolest experiences of our life… Night snorkelling with GIANT manta rays!!!

WTF you may ask? Well basically, you just hang onto the side of a paddleboard with 20 other people while floating in the ocean wearing snorkelling gear and there are lights that are on the underside of the paddleboard that attract plankton which then in turn is meant to attract manta rays.

Now I’ve got to say we initially weren’t too impressed since we had spent the whole day driving from one side of Big Island to the other, after having helicopter flights cancelled 2 days in a row due to rainy weather.

So waiting for mantas to turn up while floating in a cold rolling dark ocean, while feeling completely knackered, AND having to stay still and not being able to move about to warm up, was a friggin shitty start to the evening.

But Holy Cow… after about 15 minutes of just watching plankton dots floating around us and trying to warm Kitson up, all of a sudden this massive BIGARSED glowing white mouth just suddenly appeared up out of the darkness and I shit you not… a bigarsed manta about 3 meters across just appeared and did a massive somersault right underneath us!!! 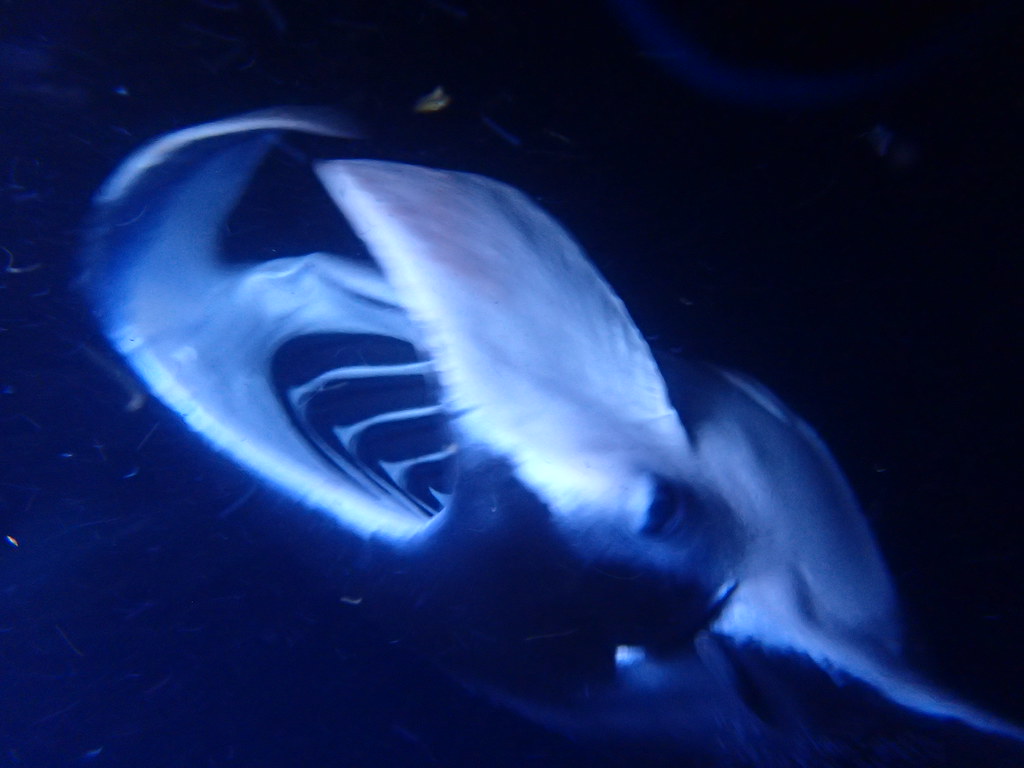 Holy Crap I think I squirted urine and squealed like a little girl… but I really couldn’t tell since all I could hear was Avril and our friend Dom squealing like a chorus of little girls since the Manta Ray kept doing somersaults to feed and kept rubbing its body up against them.

Man… we were in the water for about 45 minutes and the experience was amazing as the mantas feed by doing continual loops and somersaults with their mouth open to filter feed the plankton.

And they actually do roll right up to the underside of the paddle board. At one stage we had 2 of them rolling around doing an amazing manta dance right underneath us.

Man I was totally jealous since even Kitson got rubbed up but I missed out!

Avril reckons the Mantas are soft and a bit squishy – not like the rough skin you expect from sharks… but Kitson was the cutest, since when she was asked what the best name would be to call the Manta ray doing somersaults… she said “I want to call it a sushi roll.” Aaaaaaawwwww how cute!!!

If you are bored and want to watch some footage from my GoPro the youTube link is below for our first manta ray and the 2 manta rays.

But man… that was only one amazing experience amongst a whole heap of amazing experiences we have had over the last 2 weeks. Holy cow our Hawaii trip has been a full on whirlwind of adventure and we’ve loved every minute of it!

Now prior to coming here, I’ve gotta say we have never really had the urge to come to Hawaii. It’s just one of those places like Bali that everyone has been to and was a bit too mainstream for us.

Not to mention a lot of things people go to Hawaii for, we have at home in Queensland so it was just never on our radar.

In fact now that we have pretty much circumnavigated by car 3 of the Hawaiian islands – Maui, Oahu and Big Island, we can pretty much say that with the exception of volcanoes, Hawaii is very similar to Australia. 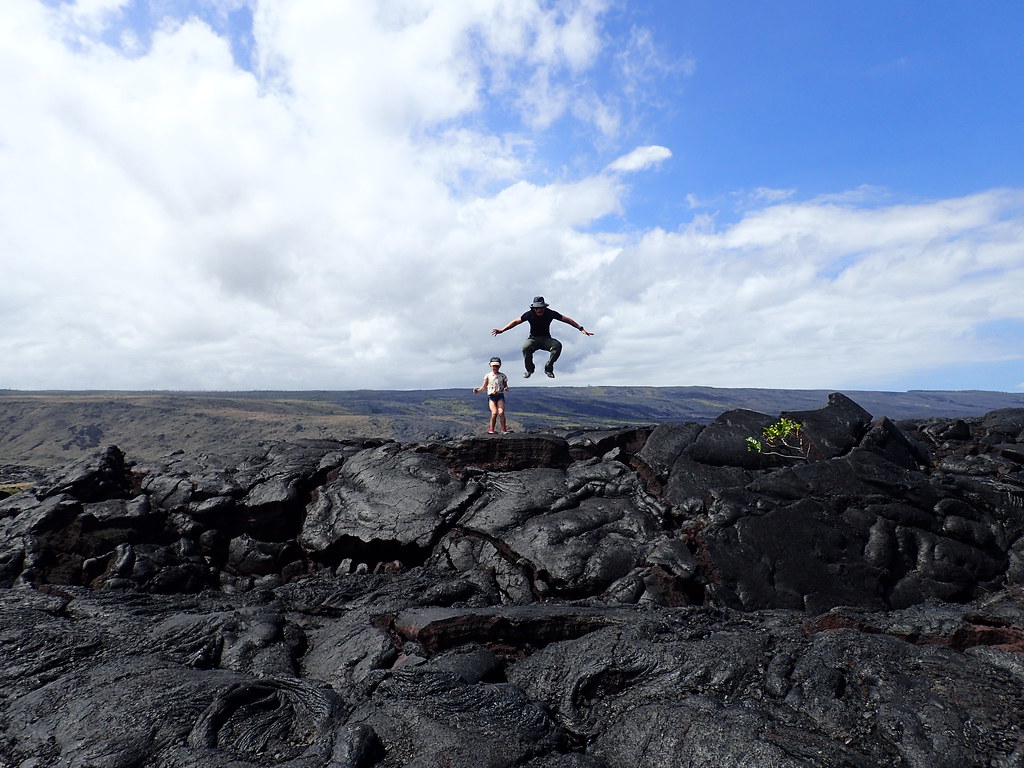 The beach culture, the rainforests, the vegetation and even the landscape is very similar but just condensed into a couple of islands. And in a lot of cases Australia is probably better, like having better reef, and better sandy beaches with better body surfing.

But man… some of the experiences we have had here in Hawaii have been truly amazing and unique.

Not only did we watch whales breaching and tail splashing from our deck every morning in Maui, we actually listened to their whale songs while snorkelling in Molokini crater just off the coast of Maui.

Man… initially Avril heard them and I dismissed it as not being possible. But the captain of our boat confirmed that there are so many whales birthing around Maui that there must be thousands of them and hence everytime we’d put our head into the water you could actually hear them. It was so cool reviewing some underwater footage of us snorkelling and hearing all the whalesongs in the background. But those friggin baby whales were so loud and jumping out of the water all the time… man… we blame bad parenting.

But on top of all that we also got to snorkel with sea turtles nibbling vegetation off lava rock. But it was doubly cool because then they would crawl up onto the beach for a sleep so we could also just sit with them on the sand after their meal. 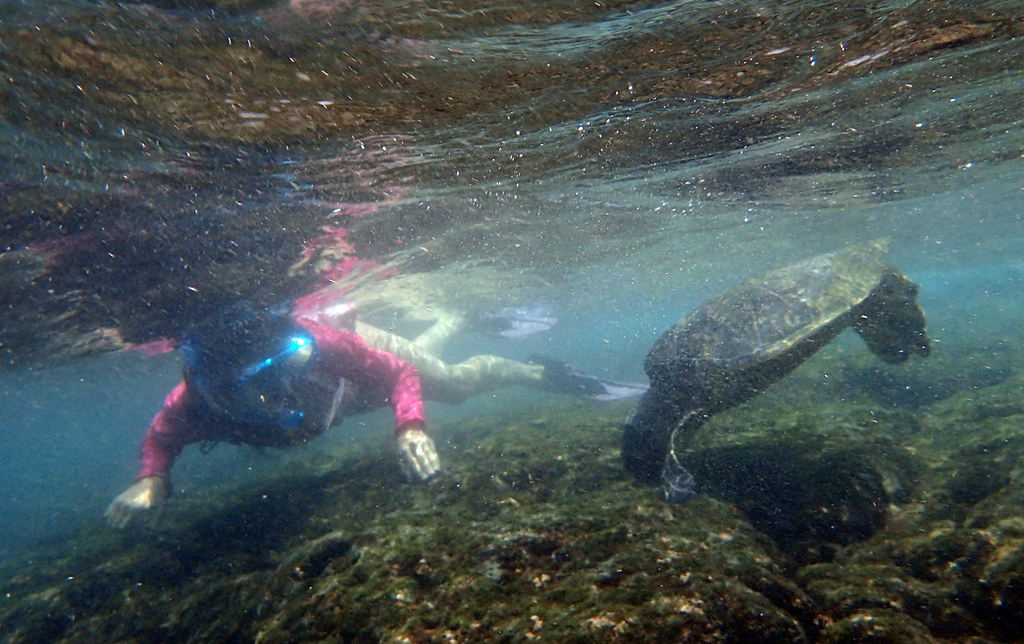 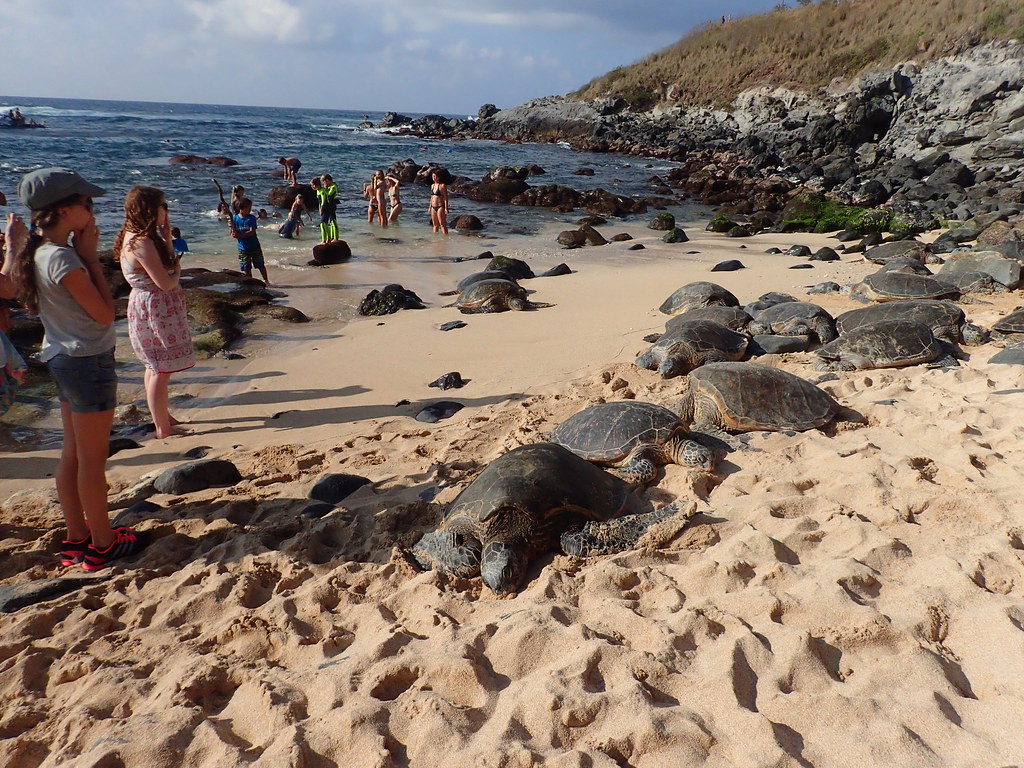 And thanks to our friend Dom who booked us in, we also got to eat at the famous Volcano House Restaurant which overlooks the glowing caldera of a live volcano.

And we also got to watch a beautiful sunset above the cloud line at the summit of Mauna Kea 13,808ft (4,208m) above sea level.

We also ziplined and paddleboarded and pigged out on Hawaiian food. Man we did so much we really need a holiday from our holiday since we are now shagged!!! 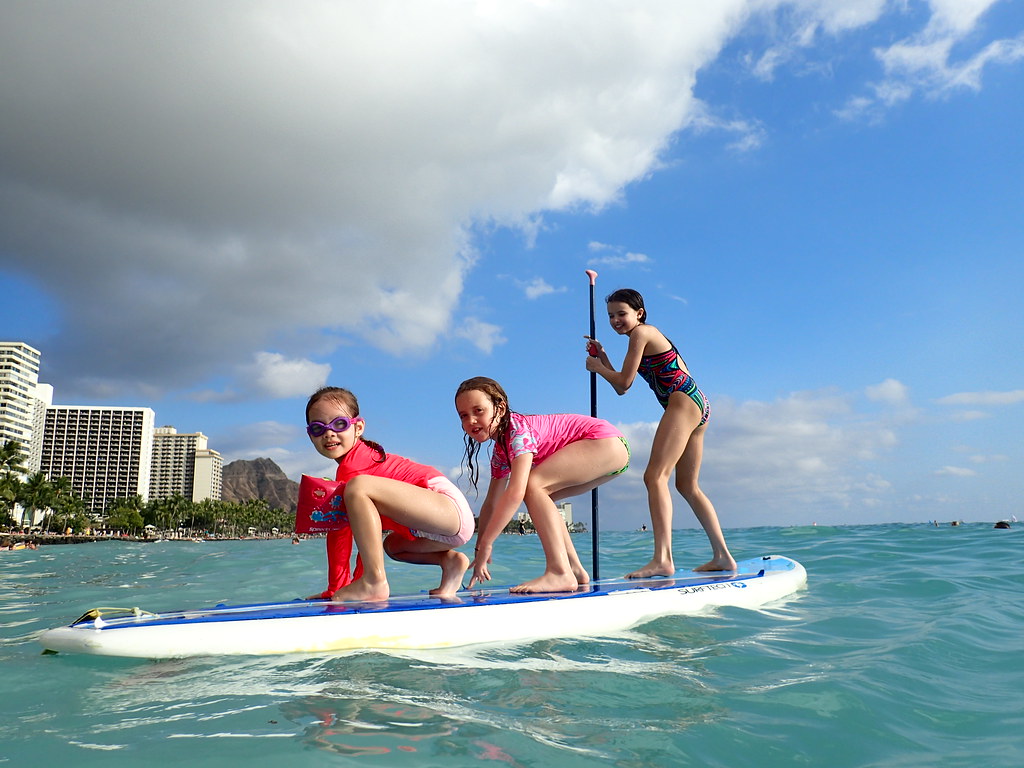 But best of all we pissed ourselves laughing at a spontaneous hula party with our friends – King Dee-hamehameha the big kahuna who just turned 50, Dom, Michael, Michelle, Aoife and Siena. 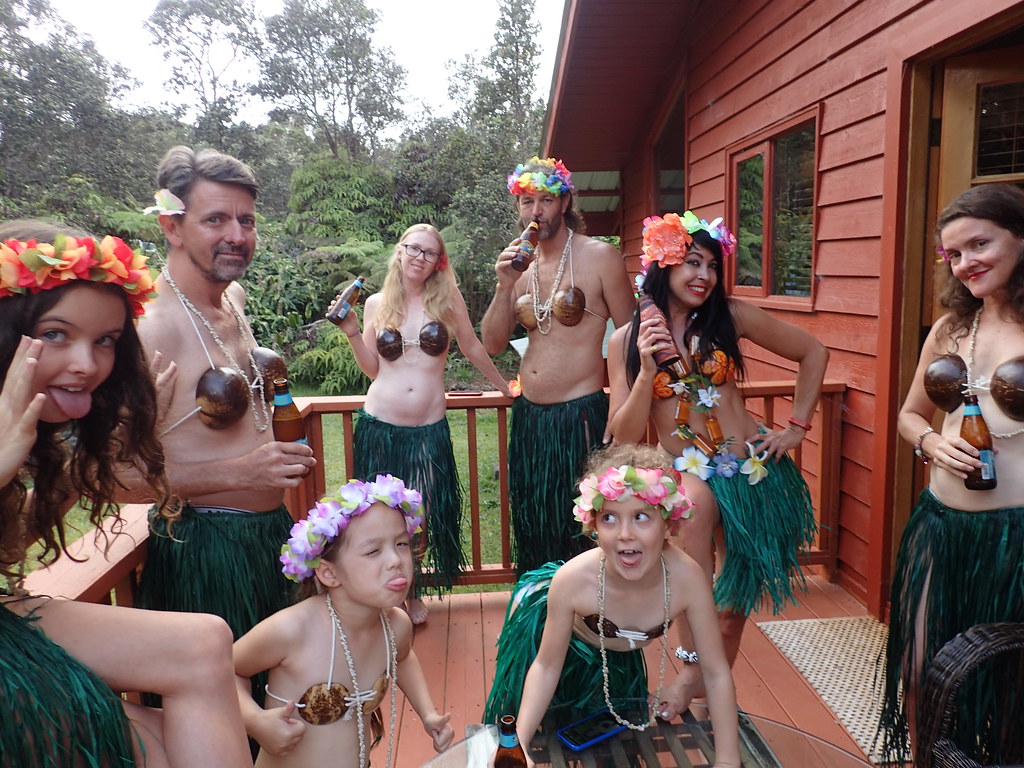 Man… life has been a bit too serious for us over the last few years and it has been a long time since I have really laughed my arse off so being on holidays with our friends who share our dumbarse crazy juvenile sense of humour was truly friggin awesome!!! Truly therapeutic! Thanks guys You ROCK-A-HULA, ROCK, ROCK-A-HULA!!! Yep sometimes you just have to rock out in grass skirts to Elvis…

Anyways we are now about to head off to San Francisco to introduce Kitson to the USA Chu clan. We’ll be home at the end of April.

If you are bored our Hawaii pics are at this link.

And our California pics are this link.