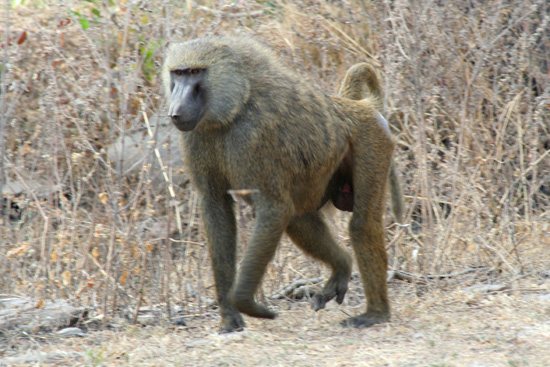 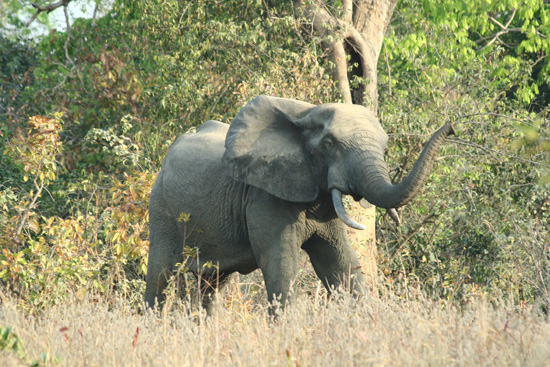 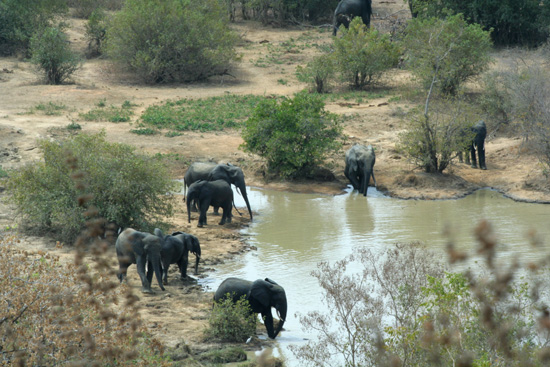 Well, we are currently at The Mole Hotel in Mole National Park which a REALLY cool elephant reserve in the north of Ghana, and… man… it would have to be one of the BEST kept secrets in these parts!

Basically the Mole Hotel/Resort that we are staying in, is built on a small cliff overlooking two huge waterholes where wild elephants hang out.

So we literally have spent the last 2 days sitting by the poolside with a beer in our hand watching elephants frolicking in the waterhole belowâ€¦ as well as having wart hog families just scrounging around our room, and monkeys just casually sitting on our porch.

And not only that… Ghana is such a dirt cheap country to travel in at the best of times, since it is easy to live on $15USD per day… But we couldn’t believe how cheap it was to come to this park which only costs 3 Euros entry, 17 Euros a night accomodation, and a 2 hour elephant walking safari only cost us 1.50 euros each compared to $100USD per person in East Africa!!!

…AND although there is not the variety of wildlife that you get in East Africa, you can get MUCH closer to the elephants here which is actually quite cool… um… UNTIL they charge at you!!!

But although watching elephants was what we came here for, we TOTALLY didn’t realise that it was like “Who Watches The Watchers”, and it was actually US who were being watched… by BABOONS!!!!

Oh Man… Yesterday, we were hanging out in our room when suddenly there was a rattle of our back door handle like someone was trying to get into the room!

Well, on opening the door, we were COMPLETELY surprised to see that a baboon was trying to get into the room… 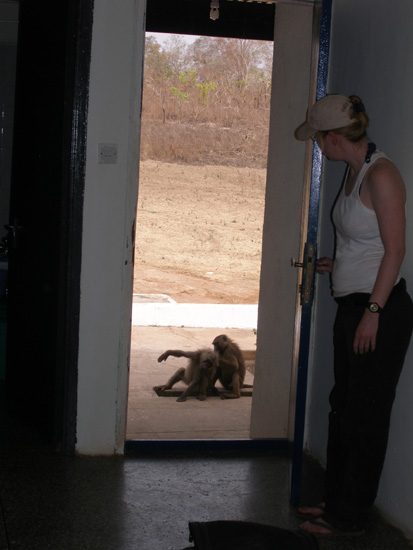 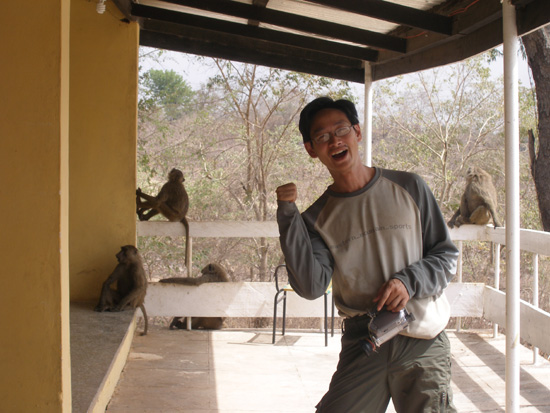 Well, the baboons were a little cautious of us at first since we were busy snapping pictures of them, but that disappeared pretty quickly, and soon this BARREL FULL OF MONKEYS were doing all sorts of monkey antics like grooming, fighting and jumping on each other on our back deck. 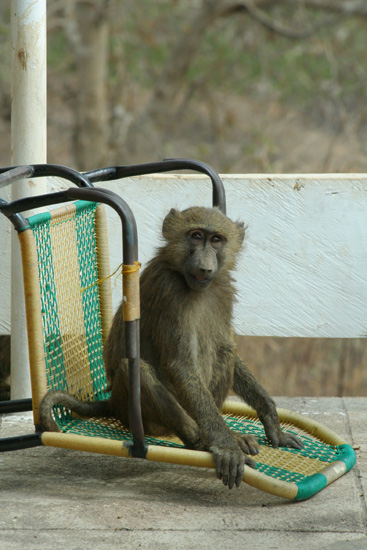 Now one young German backpacker who had never been out of Germany before, had washed his clothes and hung them to dry on the communal back deck, and of course the baboons started ransacking his clothes… so doing the right thing, I went out to the pool to tell him that baboons were eating his clothes… 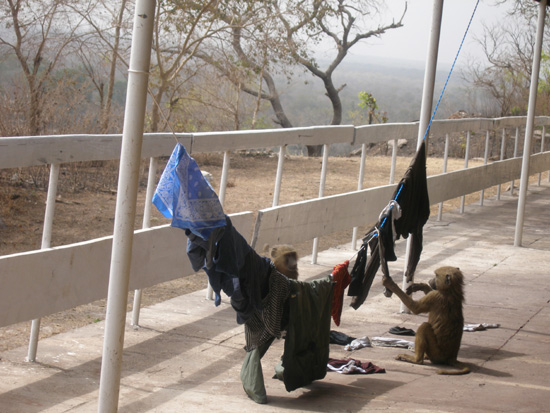 Well, the idiot German came over to the porch but instead of gathering his clothes back to his room, he started hanging them up again which we thought was pretty stupid.

Anyway, we hung around with him for about 10 minutes taking pictures while he was guarding his clothes, and of course we were wondering if he was going to just stand there all day waiting for his clothes to dry… 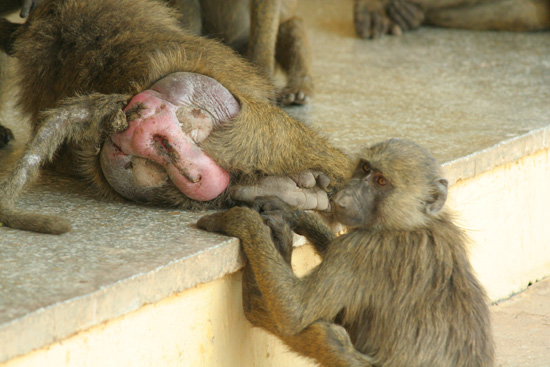 But after hanging out for a while shooing the odd baboon away from his clothes, he then turns to Avril and says “Have you finished taking pictures?” And as soon as Avril says “Yes”, we both TOTALLY SHAT OURSELVES when the TOSSER suddenly and without warning, starts jumping up and down and SCREECHING loudly at the baboons whilst waving his arms in the air, trying to act like a monkey to scare them away!!!

Well just like us, those baboons FREAKED OUT and backed off for about all of 2 seconds, but then all of a sudden they stopped, looked at him, realised that they outnumbered us, AND THEN started COMING for him with their teeth bared and screeching!!!

Now as you know we like to portray ourselves as tougharsed, fearless superhero adventurers who would have NO problems facing down zombies, ninjas or mammoths…

And you would think that after 12 years together, that in the face of danger, we would both check that the other person was OK…

But HOLY COW… When baboons attack… it’s EVERY MAN FOR HIMSELF!!!

Both Avril and I were so chicken shit FREAKED OUT by these rabid hissing monkeys, that we ACTUALLY ran away SO QUICKLY that we ended SLAMMING into each other trying to scramble through the narrow doorway of our room, and we ALSO actually started pushing each other out of the way in our desperation close the door!!!

Now you may also be thinking that since Ced has formidable Kung Fu superpowers, that he should have totally whooparsed some baboon butt…

…But ANY fool who grew up in Australia or the UK in the 80’s watching King Monkey – Great Sage Equal Of Heaven on TV, knows that kung fu does NOT work on monkeys, and ANY fool that tries is a FOOLISH FOOL!!!

Well, we were quite happy being cowards of the county and hiding in our room while the baboons attacked the German guy outside, but guilt got the better of us and we opened our door and pulled him inside.

Now, we didn’t know this at the time, but apparently when baboons attack, you are supposed to stand your ground and not show any fear and run away…

…So as soon as we pulled him inside, the baboons started screeching even louder and THEN jumped up to our windows and then started pounding and shaking on the glass louvres trying to get inside!!! 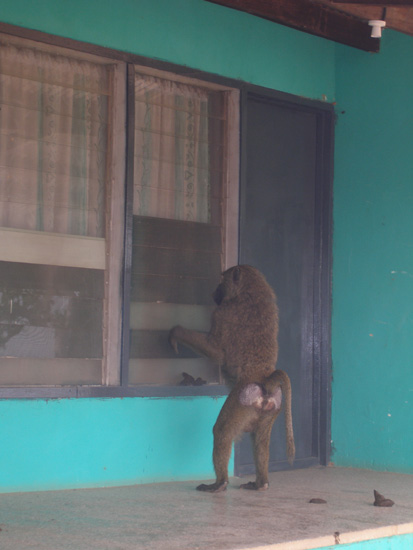 HOLY CRAP!!! It was one of the SCARIEST sights that we have seen… and it looked just like that Basement Jaxx video clip for “Where’s Your Head At” …and all we could do was step away from the windows as they surrounded the room and wonder if we were going to meet our end with baboons biting and pounding us like at the end of “2001: A Space Odyssey”, or at the start of “28 Days Later.”

…No SHIT you DUMBARSED shit for fucking brains TOSSER!!!!!

Well after a few minutes, the baboons gave up on us and left… But before they did, they TOTALLY marked our room by urinating all over our porch!!!

So we fear that our EXTREME act of self sacrifice in saving this dumbarsed German guy’s life, has now lead to OUR room being marked as the BAD human’s room… and it is possible that they will be back in the night as we are now marked targets!!!

So anyways, we know that we might have pissed one or two of you off in the past, but we’d like to think that you guys like having us around…

OK… Well I think I’ve used up all my freaky monkey analogies, so if we survive the night, tomorrow we are off to Kumasi, in the famous Ashanti region, and then we are off to the beach at Cape Coast which is Kofi Annan’s home town.

Gotta go and have a swim now…

PS Our Mole National Park pics of elephants and the FREAKY ARSED baboons is at this link.

PPS Holy cow, our neighbours… (who are also German and who must have pissed the baboons off MORE than us, since the baboons left steaming monkey turds on their window sill and back step)… just told us they saw an elephant drinking out of the pool and that they couldn’t get into their room because there was an elephant at their front door… How COOL is that!!!