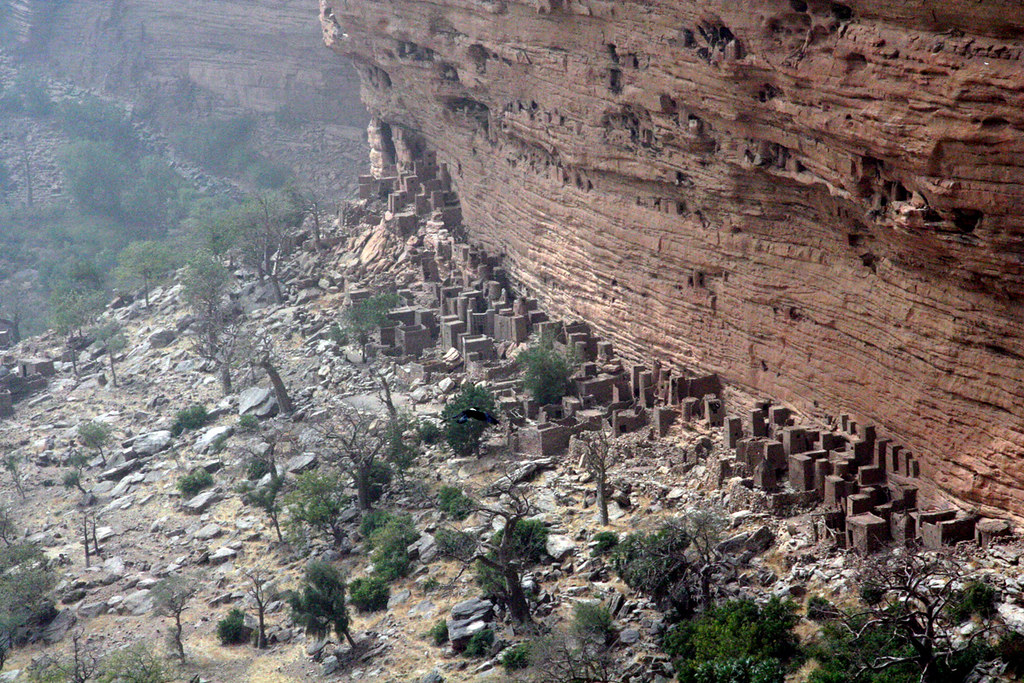 Well, we are currently in Ouagadougou (pronounced Wagadoogoo), which is the capital of Burkina Faso and it would have to be the coolest named capital city that we have been to outside of Tegucigalpa in Honduras and Llubjlana in Slovenia.

But the ride here was one of the most god-awful trips that we have done, since we literally got jammed like sardines into a rusted minibus full of holes and with no suspension… And since it was a dirt track the whole way into the country, we ended up covered in red dust that was so thick that it even stained our friggin TEETH!!! And to make it even more painful the van could only go at 30km an hour, drawing out our misery.

But anyways, we have now left Mali which is actually REALLY sad since we had a FANTASTIC time here despite all the bad things that we had read about the place before we arrived.

And it’s a also bit sad, now that we are travelling on our own again since we met some really COOL people along the way including 2 London girls Gaby and Sofia, who we have been travelling with almost the whole time we were in Mali, and who really made our trip a heap of fun.

But …man… On reflection, Mali DEFINITELY has the lions share of cultural attractions in West Africa and we were COMPLETELY surprised us at how amazingly diverse and interesting the different cultures are here in Mali… especially for a country that doesn’t get much tourism outside of the French… And that’s not even mentioning the internationally acclaimed blues and roots music scene, World Heritage level textiles, and elaborate jewelery and woodwork that you see all over the country.

In fact, it really blows us away that in just one country, we have been hanging out in a busy black Bambara African marketplace in Bamako, chilling on the Niger River with Bozo fisherman, listening to music in Timbuktu with Saharan Tuareg nomads and to top it all off, we have just spent 5 days trekking in the Dogon area in the south of Mali which is the actual reason that we came here in the first place.

The Dogon people are yet ANOTHER unique culture within Mali with their own language and traditions that have thrilled anthropologists since they still practice Animism which is attributing spirits to inanimate things… And we were THRILLED to hear how decisions are still made by elders by drawing questions in the sand and then getting answers by then reading the fox tracks across their drawings the next morning!

And a lot of them still live very primitive lives in villages made from mud nestled all along the Bandiagara escarpement which is a 65km long cliff that rises up to a plateau from the Gondo plains, which is this huge flat expanse of barren land that runs all the way to Niger and is speckled with bizarre looking balboa trees which are so FREAKY and SURREAL that it really makes it easy to imagine neanderthals running along these plains chasing down mammoths.

But the COOLEST thing is that all along the cliff face are these mud huts and chimney looking buildings that pre-date even the Dogon people and were built an extinct race of Pygmies called the Tellem people who lived impossibly in cracks and ledges high up on a cliff face!!! 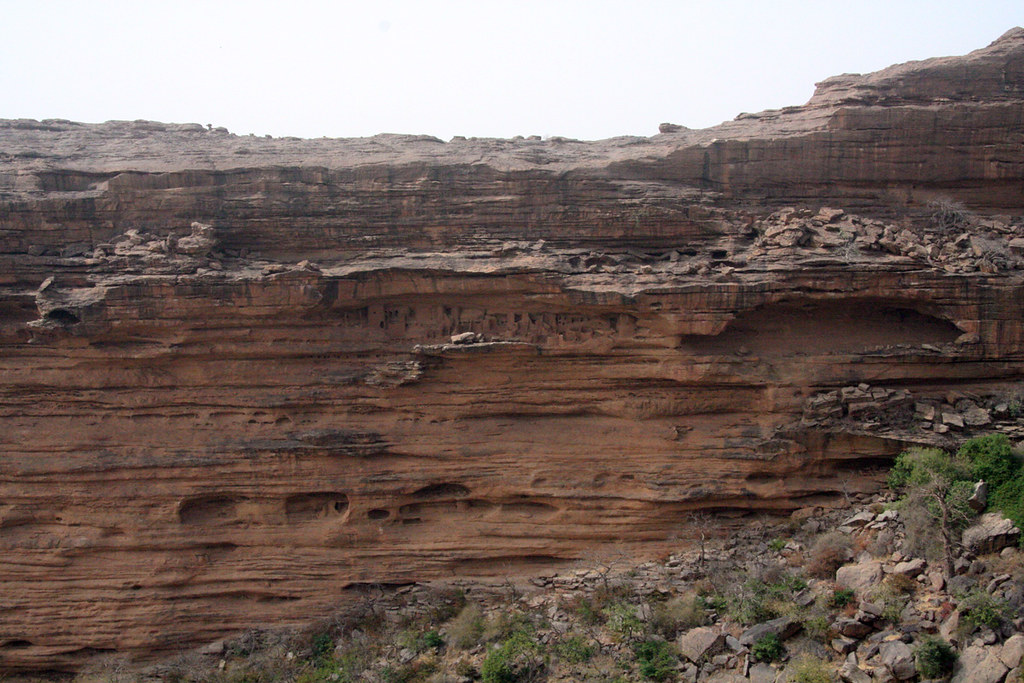 HOLY COW… Not only are Pygmies… friend to Phantom, Man Who Cannot Die… but the Dogon believe that they ALSO had mystical powers and could FLY up to their homes in the cliffs!!! Oh MAN!!! How COOL is Mali to have EXTINCT FLYING PYGMIES in their history!!! Much cooler than flying nuns or tossed dwarves!!!

But anyways trekking along the cliffs for 5 days was FANTASTIC as we slept on the rooftops of mud huts under a brilliant starry African sky, and also got to learn heaps about their myths and legends while trekking up and down villages that we would describe as actually quite magical. 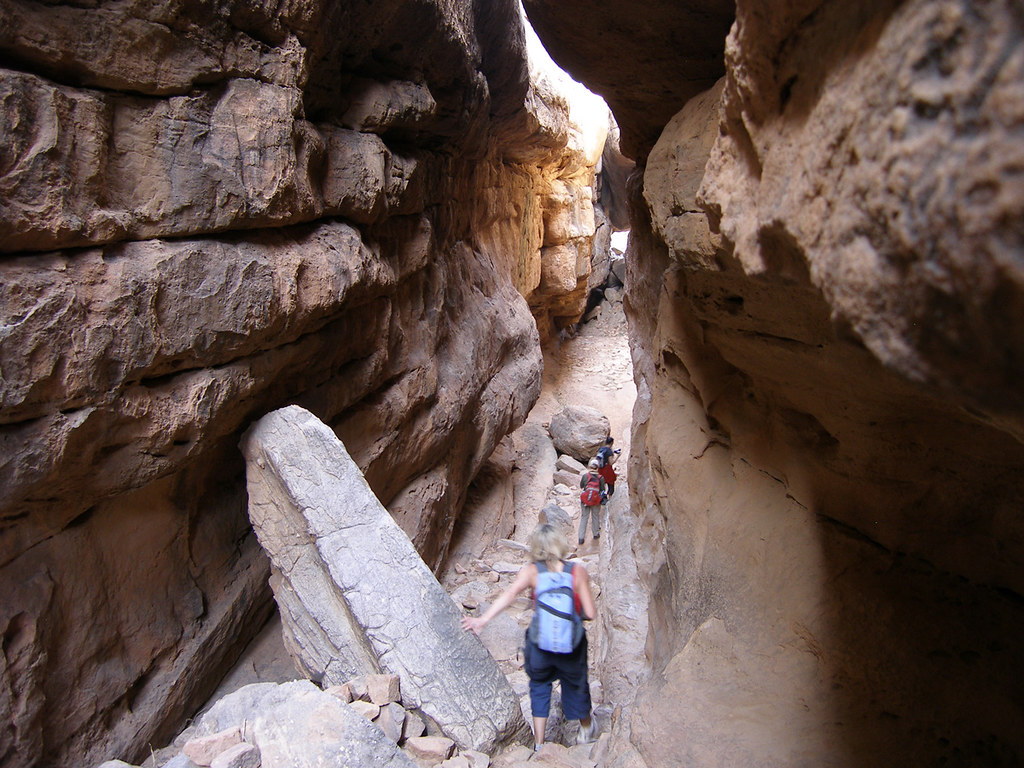 The only downsides though were realising that the men of these villages are completely lazy shits, and the women do the brunt of the work, even carrying heavy baskets of goods on their heads 50km to market and back a couple of times a week… and that is even after having to go through female circumcision as children!

…um… although the boys ALSO get circumcised with an axe at age 15 which sounds awful too… No wonder the pygmies flew away!

…but in reality, there are only a couple villages that have even heard this legend, making it sound like a bit of a phoney baloney story! Bummer… no X-files here…

So anyways, we are now in Ouagadougou, the capital of Burkina Faso just south of Mali, and coming here in one sense has been awesome as Ouagadougou is very modern compared to Mali and really showed us how backward Mali’s infrastructure is since we can actually get money from ATM machines here, go to supermarkets and buy recognisable street food which are all things you can’t do in Mali.

And funnily enough in Ouagadougou, the international Airport is in the centre of town and is so close that you can walk there… But the bus station is on the outskirts of town so far away that you have to take a taxi there! How WEIRD is that!!!

But unfortunately, we have found a major difference in the people here and the Burkinabes are DEFINITELY a lot more arrogant since they believe they are the most cultured people in West Africa, and they are also loud and boisterous and have no problem yelling and screaming at each other in the streets which is very different to the generally reserved Malians.

And we have found the touts to be much more aggressive here… well… enough to tell one of them to feck off after he tailed us for 10 blocks… And one Swiss couple we met said that they met a Burkinabe guy who told them that he was having a bad day since Saddam Hussein was killed and therefore they should give him some money.

So anyways, despite the coffee and good food, we have decided that it is not worth the hassle seeing anything else in Burkina Faso so the Burkinabes can stick their Burkina Faso up their Burkina Arsehole and we’ll be heading off to Ghana tomorrow which at least is an English speaking country!

PS. Our Dogon pictures filled with magical fairy villages and bizarre landscapes are at this link if you are bored… No flying pygmies though… And our Burkina pics which are a bit bland but show our crappy bush taxi ride are at this link.