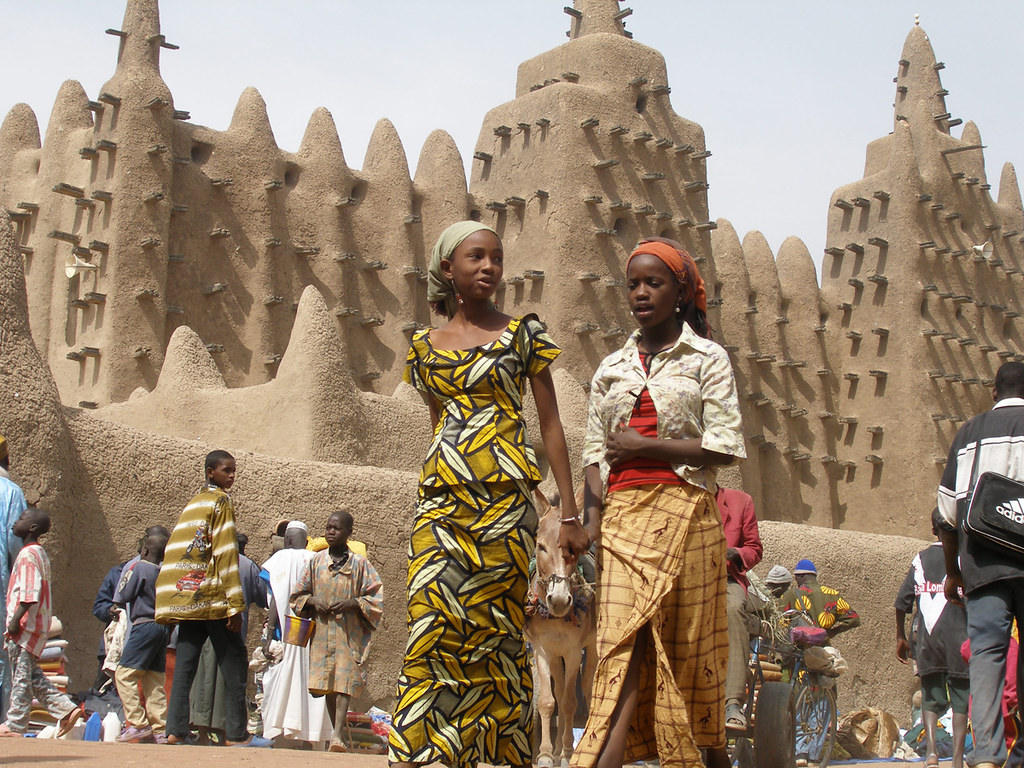 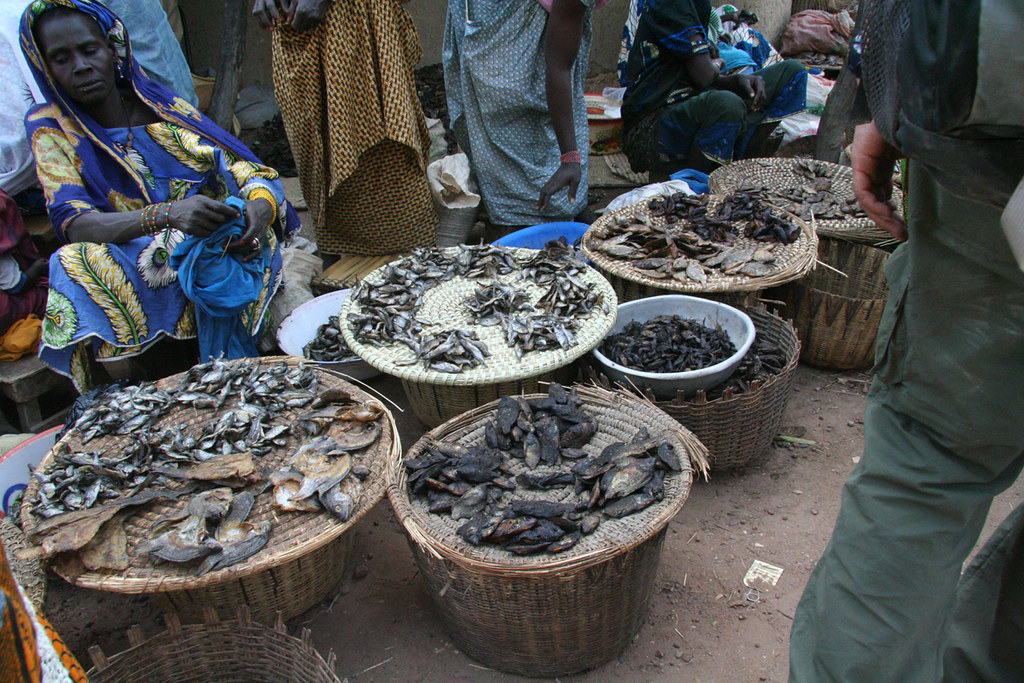 Well, we are currently in a dusty little town called Sevare in the middle of Mali, and after 5 days here Mali is DEFINITELY living up to its reputation as a hard travel destination.

So far we have sat in a chicken bus to a fishing village called Segou on the Niger River, choking and coughing and covered in fine red dust since the wheel arch of the bus was completely rusted open with holes filling the bus up with dust… 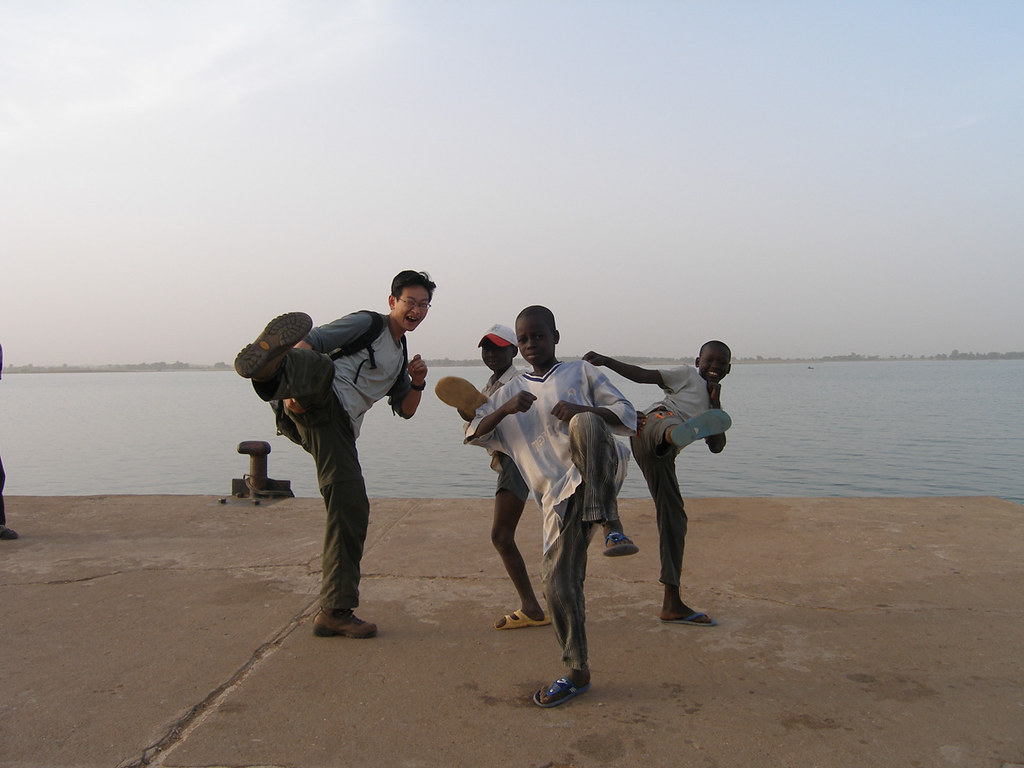 And we also managed to ignore the guidebook and get on a bus NOT recommended by locals, which then broke down leaving us stranded in the scorching sun on the side of the road for 3 hours while the driver completely dismantled the engine.

And THEN since the normally 6 hour journey ended up taking 14 hours, we got dumped a cross roads on the highway late at night where we had to hire a decrepit Peugeot with no brakes, which we then had to push onto a river ferry since it could only be started with a push start! 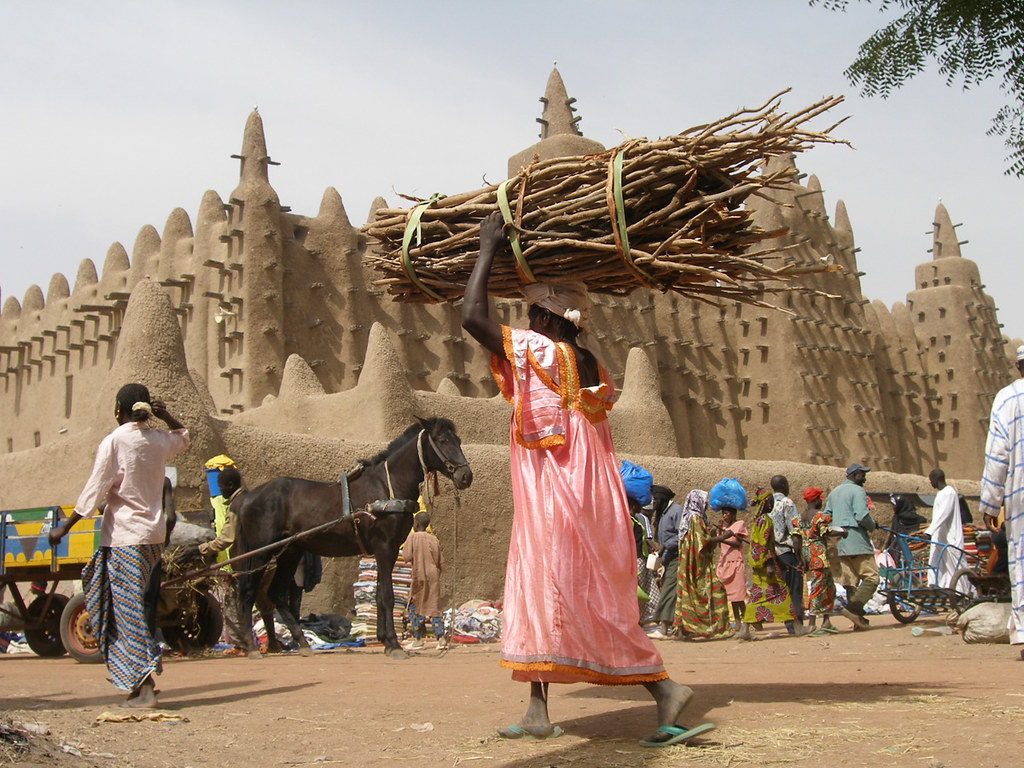 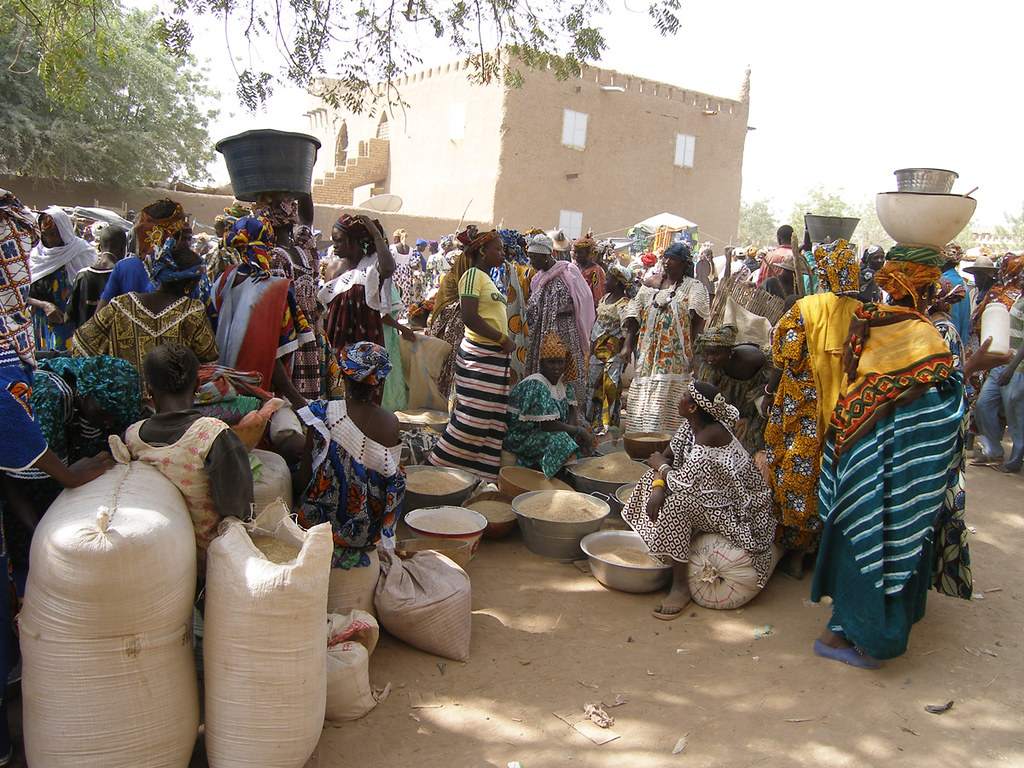 And to make things even funnier, since our French is so bad, we’ve been depending on 2 cool Norweigans (Brjunjar and Djermund) and a cool American girl (Maria) to do all our negotiations for us.

But despite all this, we are TOTALLY loving it!!!

Man… You probably got the impression from our last couple of emails that working in rural Ireland and even travelling in Europe was TOTALLY getting us down.

Well, we have now realised that we are total adventure junkies and there is just NOTHING adventurous about travelling in Europe at all.

But Africa-ca-ca-ca on the other hand is just so hot, dirty, poor and vibrant that it’s been one big adventure that has just ROCKED OUR FROCKS off!!! …So we are now TOTALLY invigorated to travel again!!!

Actually to be honest, we came to Mali thinking it was the worst place on Earth since there were so many bad reports about travelling here, but so far it really hasn’t been that bad at all and we’ve found it quite easy getting around.

However, saying that, we still got a bit culture shocked since we actually arrived into the capital city, Bamako at 4 am. So our first view of Bamako was in the morning when we walked out of our hotel into a dirty rubbish strewn muddy road next to a dusty shanty town market with very primitive looking stalls covered with thatched straw roofs supported by posts made by gnarled branches. 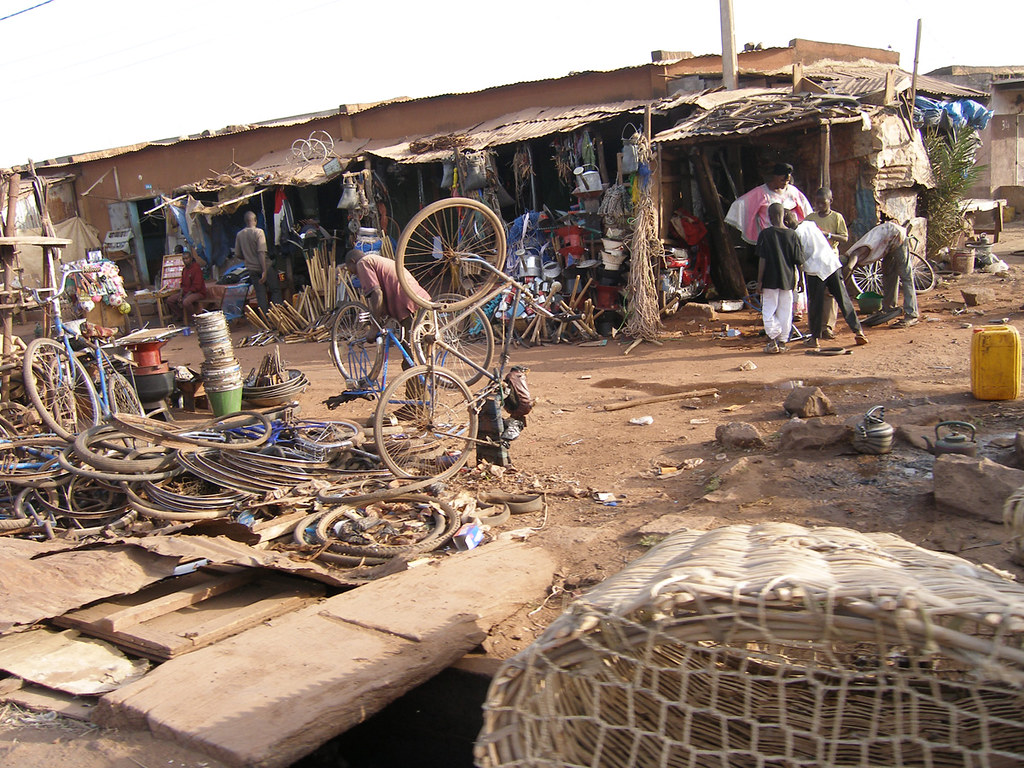 Not only that but there were open sewers everywhere and pollution so thick, that after 24 hours our noses actually started to bleed!!! 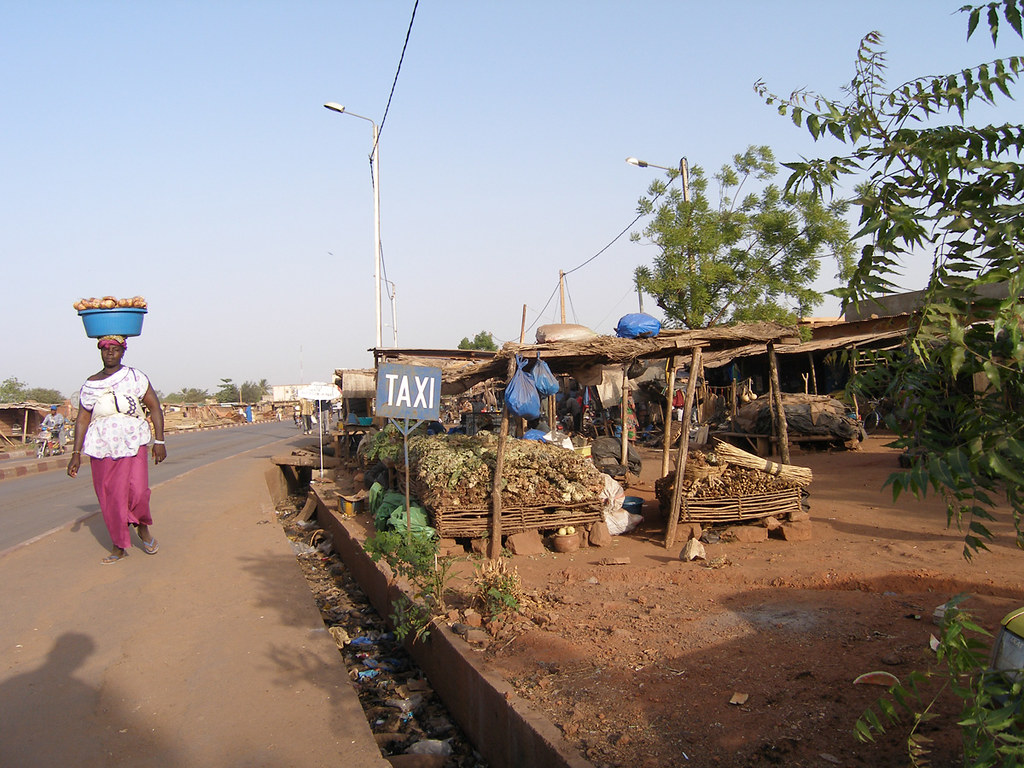 But despite being hot, dirty and dusty, the place didn’t stink as much as we thought it would and the people were a lot more friendly than we were lead to believe. 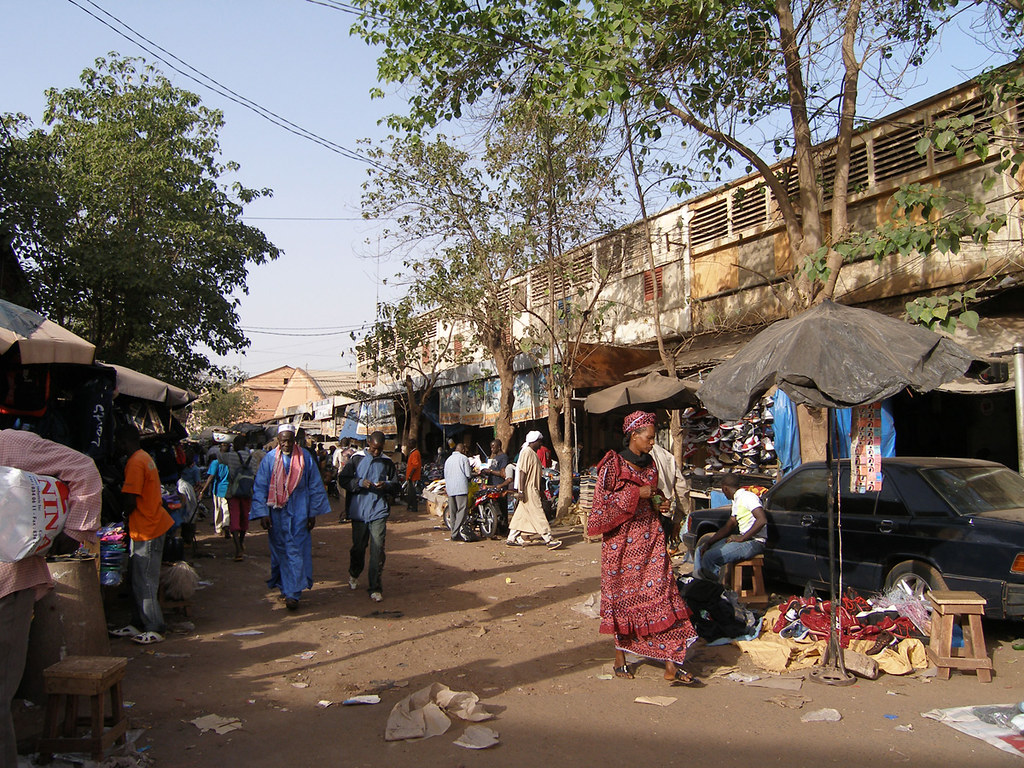 And of course all the streets are just teeming with amazingly colourfully dressed people with impossible amounts of produce just balanced on their heads!

In fact, we were very surprised to see that although Mali is one of the poorest countries in the world, the people of Bamako dress very elegantly, stand tall and proud, and some of the women are even taller than me, and are so beautiful and statuesque that they totally look like supermodels!

So really, Mali is nowhere near as scarey as we had read about and it makes us wonder what lamearse prissy little travellers were writing those blogs that we had been reading.

…um… But I guess we might have been a bit more culture shocked than we thought, since on our first day Avril almost became African roadkill in an encounter with one of Africa’s MOST DANGEROUS large mammals!!!

Avril was on the centre island of a dusty main road in Bamako trying to take a picture of these amazingly overcrowded buses that just bump along down the road, when all of a sudden, on the other side of the road, a middle aged big fat Malian woman in an immaculate brightly coloured dress and a massive beehive headdress started yelling and waving her hands at us.

Well, at first we just smiled and waved back, but that made her rant even louder and eventually she ran her index finger across her neck suggesting that she wanted to cut Avril’s throat!!!

And then if that wasn’t enough, she then walked over to a fruit stand and picked up a small machete knife and ran it across her throat AGAIN to show us she really meant it!!! 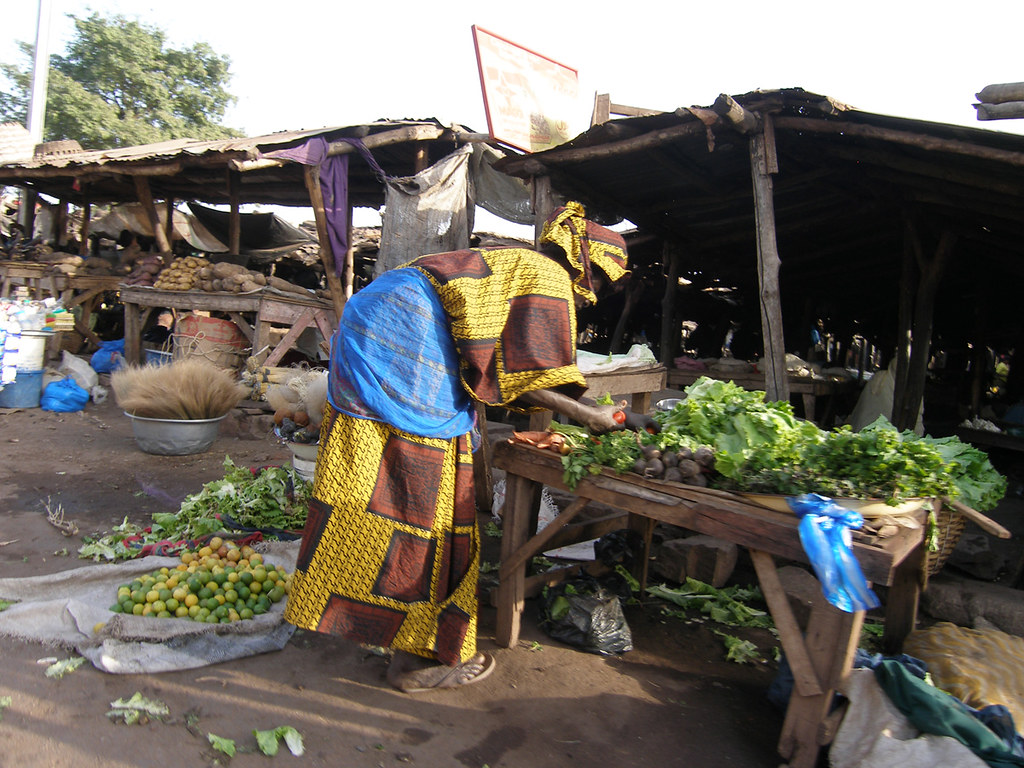 Now by then we realised that she thought we were taking a picture of her and she OBVIOUSLY didn’t want her photo taken which is something that we had read about… But since all the other people on the street were laughing, we didn’t take her seriously at all and I decided to just walk away especially since it was a bit freaky!!!

However, as I was walking away, I turned around and HOLY CRAP… I saw Avril gesturing with both her hands at chest height with her palms up, ACTUALLY taunting this freaky big mama to come over and have a go!

Now, although Avril explained to me later that she was just waving this lady to come over so she could show her that she was taking pictures of buses and not her…

…I PERSONALLY failed to see ANY plausible reason to invite a big fat African woman waving a friggin bigarsed knife to come over to our side of the road AT ALL!!!!!

Well, the African lady obviously ALSO thought that Avril was taunting her, since she stopped ranting, took a couple of steps to the edge of the road, squatted down, AND THEN started SHARPENING THE KNIFE on the concrete edge of the gutter!!!

…And THEN she stood up defiantly, sucked in her stomach and stuck out her huge bossom, and gave us an evil African voodoo death stare, and THEN ran the knife across her throat AGAIN!!!!

Oh MAN!!!! Well that was it… We were out of there!!! There was NO WAY we were going to hang around, especially when I am SURE that I read somewhere in our guide book that the most common causes of deaths to tourists in Africa are road accidents, Malaria, hippos, elephants and LARGE AFRICAN WOMEN!!!

Anyhows, Avril- the silly girl- still has her head on, which is probably good since I don’t how our relationship would go if she didn’t have a head… um… so tomorrow we are off to Timbuktu and back for the Festival Au Desert.

Geez… HOW FRIGGIN COOL was that to type!!!

Lots of love and keep in touch

PS. We’ve finally managed to get our photos loaded up, so you can click this link to check out our pics of Bamako, Segou and Djenne which is an amazing World Heritage mud mosque with a huge market place and would have to be one of the most impressive structures that we have EVER seen!