Well here we are in Quito, the capital of Ecuador and only 22km south of the equator, and believe it or not, although they tell us it’s early summer here, we are still wearing our fleece jackets at night since it’s bloody cold due to the altitude!!!

Over the last couple of weeks we’ve been doing the Indiana Jones/Lara Croft/Tomb raider thing and seeing soooooo many archaeological sites that we’re almost completely ruined out… but honestly some of the things we’ve seen have been absolutely amazing.

We started in Lima at the San Francisco cathedral which has catacombs underneath it in which approximately 70 000 people where buried… As you walk thru there are literally bones everywhere from wall to wall and stacked in huge wells. There was also a cute girl there that bent over and gave me a bone too…

Next, we went to Chavin de Huantar a huge underground temple about 3000 years old which is near Huaraz in Northern Peru. It’s a cool place as there are heaps of statues of feline gods all with big boogers hanging out their noses because all the gods were all cocaine addicts. 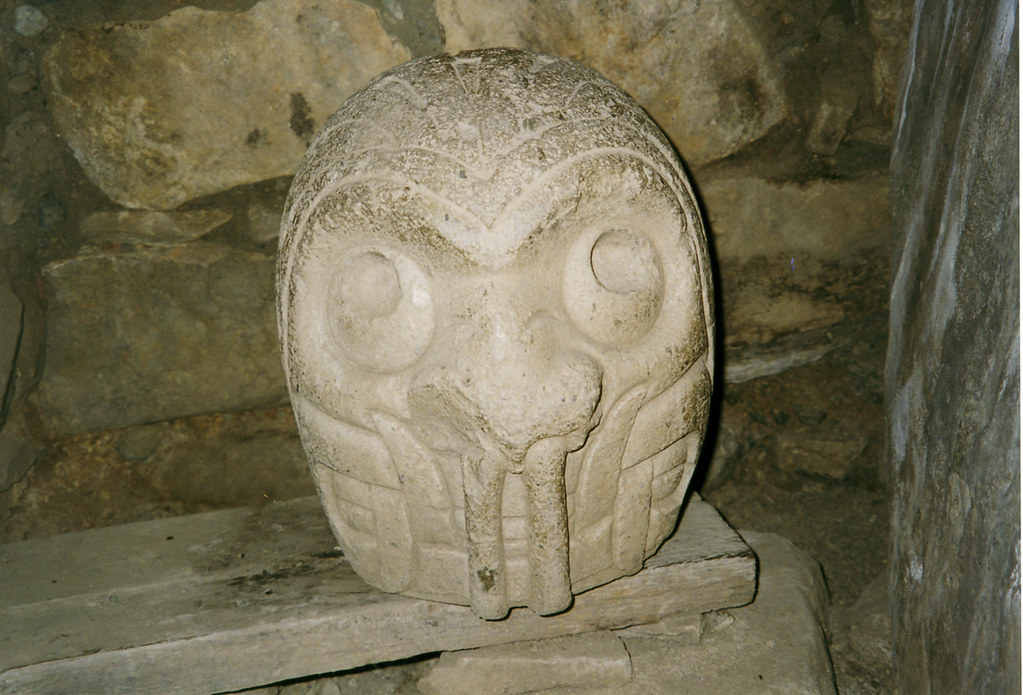 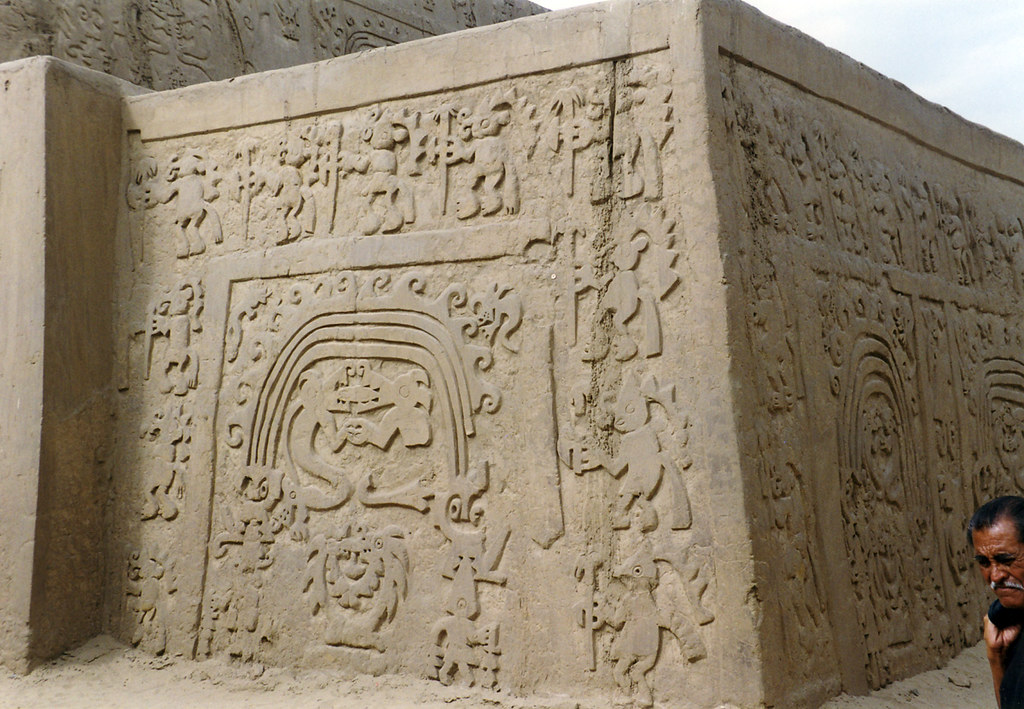 His belief is that the ancient people around the world probably found dinosaur bones, which were more abundant then and then thought they belonged to some huge monsters or dragons… which actually sounds like a very good theory. He definitely was a very interesting man but he was really quite strange….

We also went to Tucume, a huge temple city with the largest adobe (mud-brick) pyramid in the world. Thor Heyerdahl, the famous archaeologist who did the Kon-tiki expedition on a raft has been working here trying to prove that Polynesia was inhabited from people from Peru, so that was really interesting too. 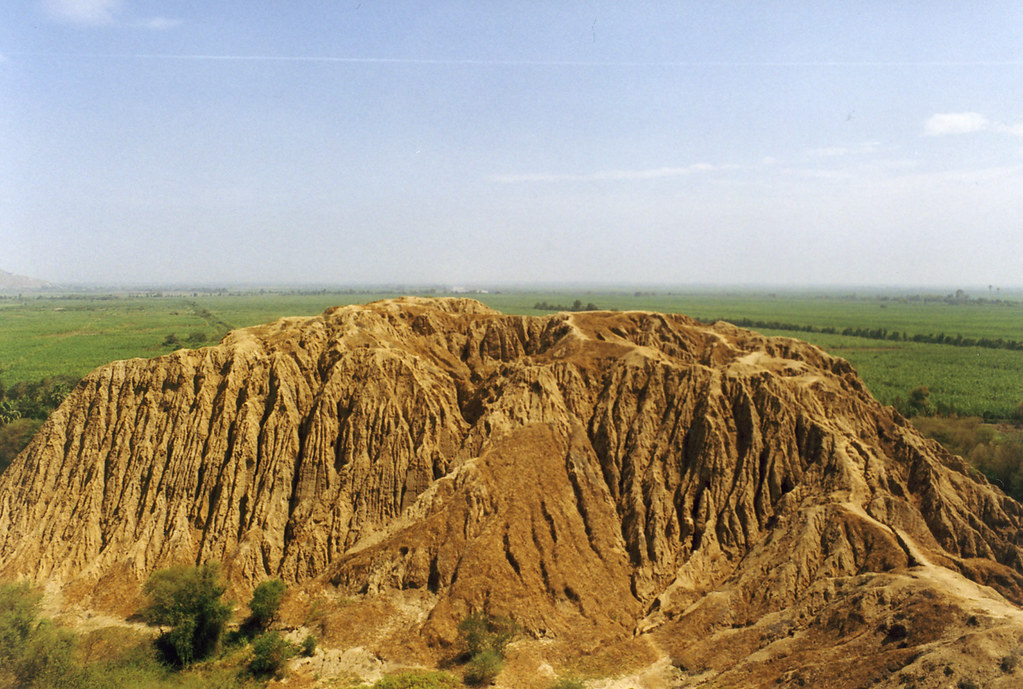 His belief is that mankind was actually very advanced in sea navigation up to several 1000 years BC which contradicts current thinking that primitive man was actually quite lame.

The most impressive place up in Northern Peru however is the temple of the Lord of Sipan, which was discovered in the 80’s, and is the richest archaeological find in the modern world.

In the temple complex they have found the burial chambers of 5 kings and all their gold, which is amazingly elaborate, and soon they are expected to find more. There is actually 1000 years between the burial of the first king they found, and the last, and they were buried with escorts and slaves who were possibly sacrificed as well…just like in Egypt. In one of the tombs, a guard was buried with his feet cut off to stop his spirit from running away… weird shit…

While we were at Sipan the workers were having lunch, so we snuck behind some barricades and found a tomb that they’ve been working on.

It was a huge pit with 3 bodies and a llama, which had just been unearthed, so that was way cool!!! We had to suppress our urge to jump in and run around with water pistols humming raiders of the lost ark music… 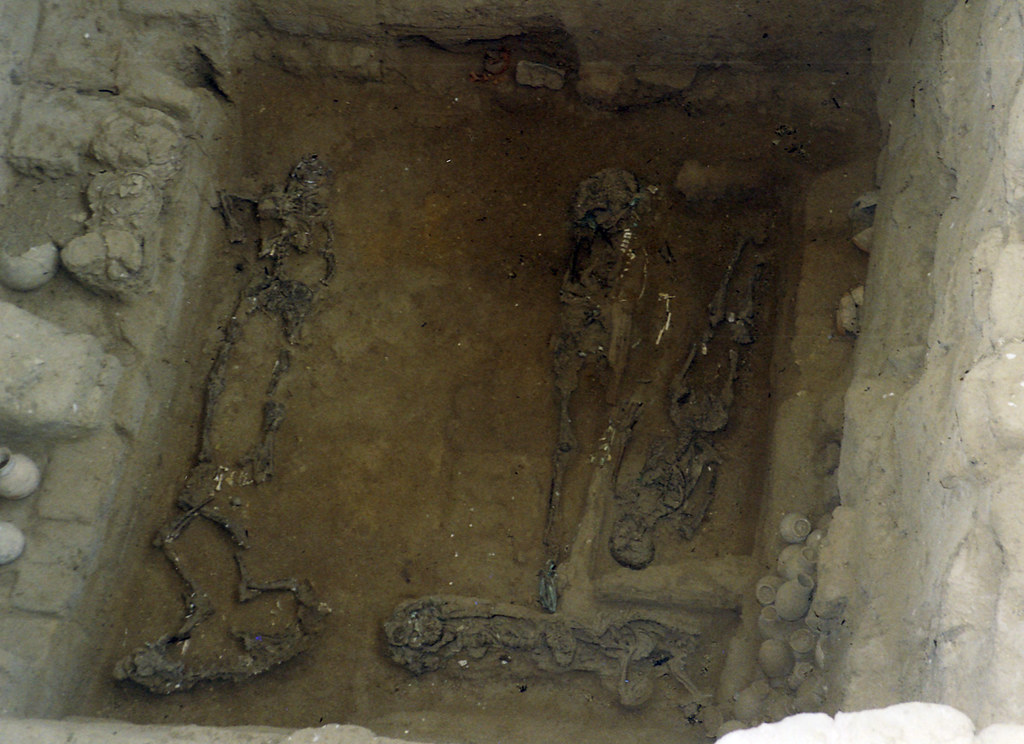 There were some other really cool sites that we were going to visit including Kuelap a huge stone temple built on a mountain ridge with 3 times the amount of stone as the great pyramid of Giza… This place would have been cool as the legends claim that it was built by very tall white skinned, blue eye, blond people, and bones found at the site support that people over 2m tall lived there…all of which suggests that the Vikings may have reached here 1000’s of years ago… well either that or that there were big basketball playing aliens around back then…

Sadly after a horror bus ride in which the driver hit every pothole as hard as he could just to watch all the chickens and ducks on the bus fly through the air, we decided that our haemorrhoids couldn’t stand any more trips to way out sites so we left for Ecuador.

We’re kind of glad to be out of Peru as the towns were all bleak and dirty and travelling there was really tiring and stressful. Peru however has a wealth of amazing sites, but unfortunately most are made from mud bricks so they’re so weathered that they look like just big piles of dirt and it takes a good imagination to appreciate the splendour of these ancient cities. Still we appreciate seeing them in our life time as one day I’m sure they’ll be gone (violin music)…

Ecuador on the other hand is beautiful with mountains surrounded by low silver clouds that flow down thru the valleys. There are some of the highest concentrations of bird species in South America here and of course the Galapagos Islands where Charles Darwin developed his theory of evolution.

…and best of all… toilet seats YAAAAY!!!! We were so happy that we celebrated by changing our socks and underwear before the 7 day time limit!!!!

The other thing we are happy about is getting away from the friggin Peruvian shower system. Man!!! It’s basically a small water reservoir with 2 live electrical wires going into it. You have to get the water running and then throw the frankenstein switch which then sparks a current in to heat the water up. Man we got electrocuted so many times throwing the switch and also touching the shower head. And if you run the current without water in the reservoir it definitely short circuits onto your body. Friggin hell! I don’t know how we made it out of Peru alive! 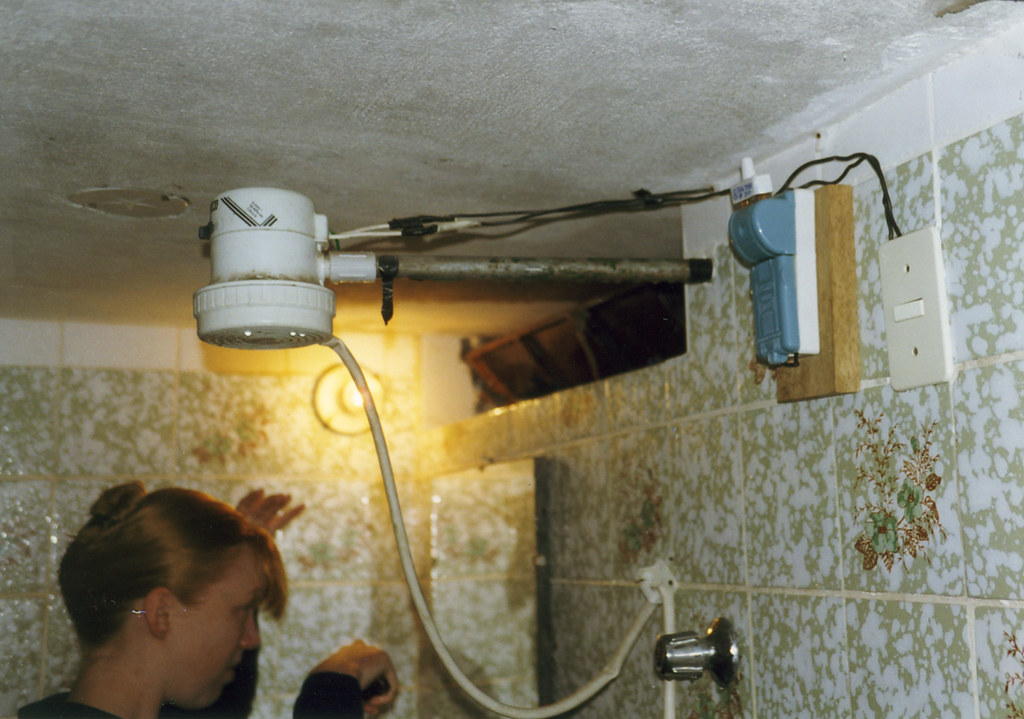 Sadly though, even though we’d like to stay more time in Ecuador we’re running out of time and it costs over $US1000 to get to the Galapagos so we’ve skipped it, but hopefully we’ll be back one day. We did however get to the equator, but were sadly disappointed that the toilets on both sides flushed anti-clockwise.

However, not to be outdone by 4 British lads we met (yes Duncan, Paul, Jim and Andrew this is your fault), I too had to take the mandatory photo of my butt on the equator with one cheek in each hemisphere… Unfortunately an old gentleman at the scene took extreme offence to my bottom and started yelling obscenities in Spanish and pointing at his crotch suggesting why don’t we also photograph my penis too… 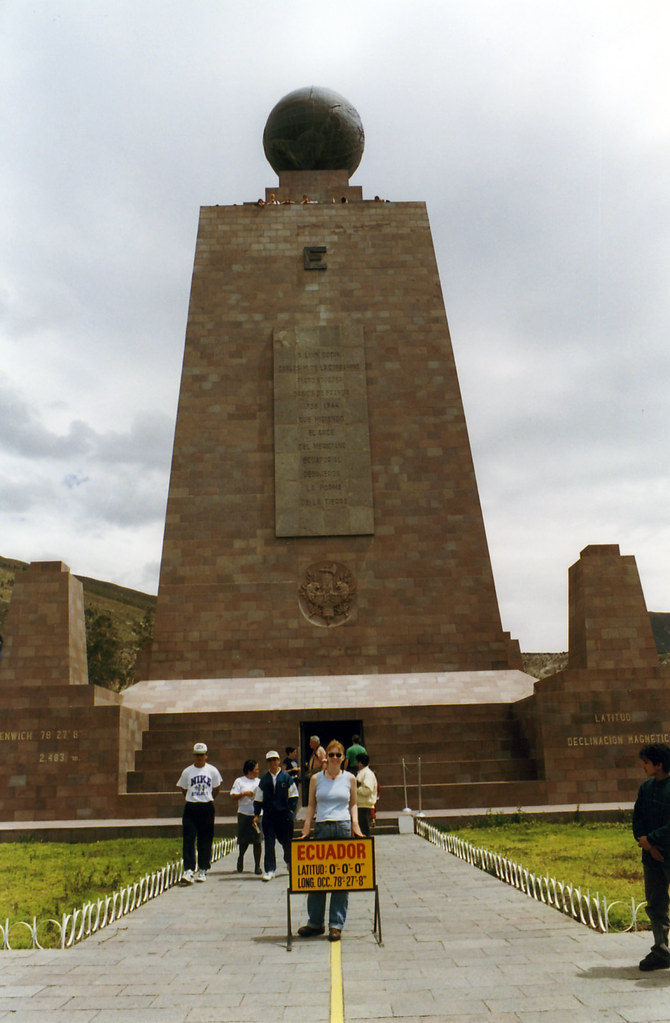 Avril quickly replied in broken Spanish… “Sorry sir we don’t understand, but we don’t want to take a picture of your penis”.

Well, all the other locals thought it was extremely funny but he was quite pissed so it was definitely not a good moment in Ecuadorian/Australian relations… needless to say at that point, we made sure that everybody knew that we were from New Zealand…

Anyway, tomorrow we fly to Panama City so we put away our well used South America handbooks for good and start our Central America leg…

Our recommendations…. Hostal Londres ($US2) in Cuenca, and Hostal Casa Paxee ($US5) in Quito which is a beautiful unit style hospedaje with kitchen and a senora who is like a mother… it’s also the only hostal we’ve seen with free tampons and condoms to use!!!

PS Click here for Peru Archaeology pics and dead mummies. And here for some Ecuador photos.

Patrick…. see you at 7.30 at Arribar in Mariscal Sucre in Quito on Monday… emailed Kim and will ring him tonight to confirm

Arun….. you dumb gimpe… those dates are completely inconvenient for us… hopefully will see you after you’re back from holidays… let us know where you’ll be ok… kat the ignorant caveman doesn’t have an email

Kendall…. nice to hear you survived Colombia. Sounds like you’re back to the grindstone. Now that we’ve heard your story we are soooo jealous… we want an interpol record too….