Hey there movers, groovers and other furry animals

Well we’ve arrived in Antigua in Guatemala after an absolute whirlwind trip thru Central America full of danger, intrigue and strange mutant animals.

Flying into Panama City was a complete shock to the system… It was sooooo bloody hot!!!! We realized that we’d really been sheltered from the heat and mosquitoes by the altitude…. but other than that, it was a kind of funky place.

The city itself was a huge bustling metropolis where the Afro-caribs outnumber the Latinos and everyone speaks American. Unfortunately it was also really expensive so we ended up staying in the slum area where they tell you not to walk down side streets in the daytime or you’ll get mugged… budget travelling really sucks the big one sometimes.

It actually wasn’t too bad and although the people rarely smile, they were the most helpful people we’ve come across so far… one lady even stopped at the bus stop and took us from the airport and drove us for over an hour to our hotel telling us all about Noriega and how they weren’t real happy about the war with America in 1989… a very touchy topic.

However, the Panama Canal was fantastic… we didn’t think we’d get off on watching big boats, but actually seeing these HUGE boats being lowered to sea level with only 26 inches clearance on each side was amazing. (Patrick you’ll wet yourself if you make it here!) It was so cool that we rate it as almost as much fun as watching your rubber ducky spin down the bath hole!!!! 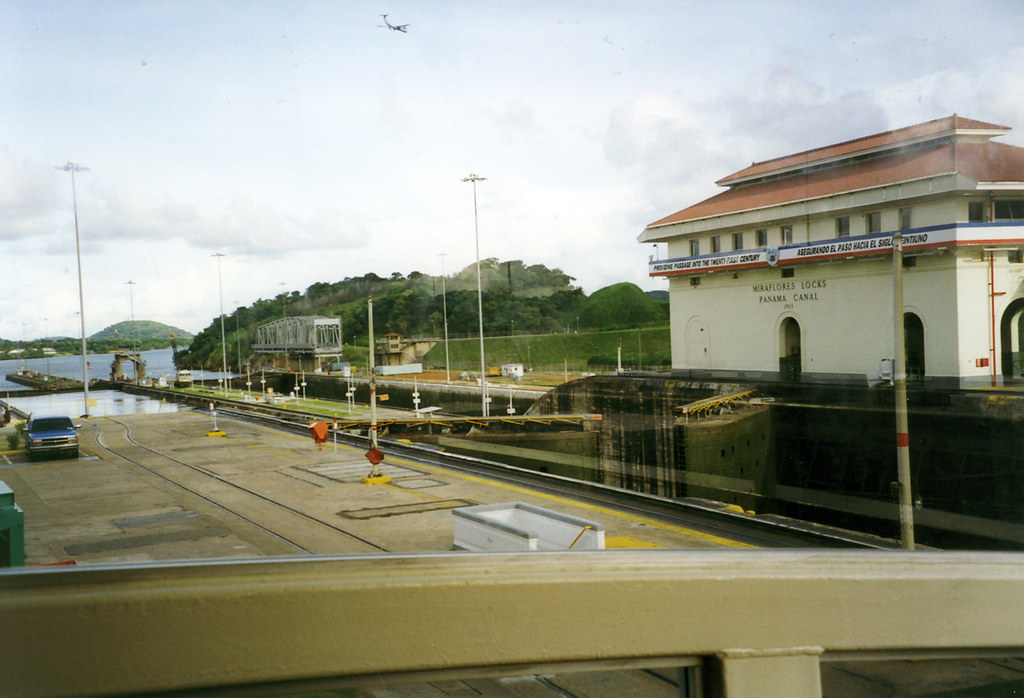 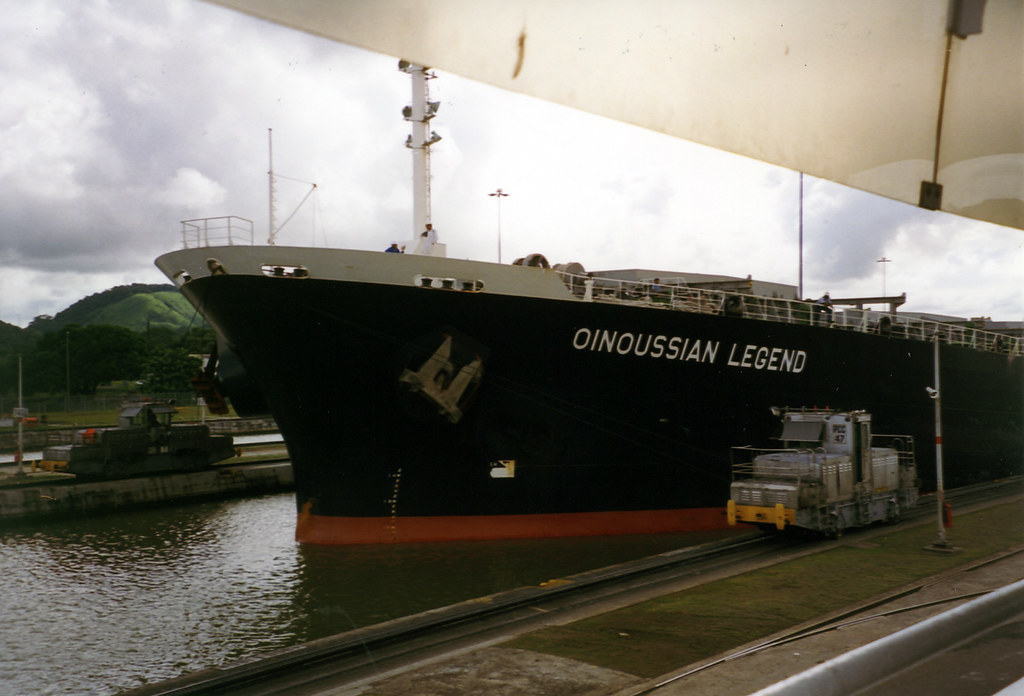 Next it was a miserable border crossing into Costa Rica… we had 3 hrs at the border in the middle of the night as the guy wouldn’t let us into the country because we didn’t have an onward ticket out of the country and he wouldn’t accept our international ticket… Luckily we were able to bribe the bus driver $US5 into writing us a fake one… travellers tip… make sure you go with an international bus company so you can do the same if there’s trouble!

If that was bad enough, in San Jose, the capital of Costa Rica, we ran smack into the North American holidays so the whole place was crawling with loud obnoxious American college students… (not that I’ve ever been a loud obnoxious college student!!!). Needless to say all the prices tripled, the whole country became sick of tourists and the Australian dollar dropped to an all-time low!!! Consequently our budget died in the arse… not that we’ve ever had a budget in our arse, but you know what I mean!!

Avril had her birthday on the 11th so after a 5hr bumpy bus ride (standing all the way) we spent a beautiful day in Monteverde, a cloud forest resort town in the mountains of Costa Rica.

We walked thru a butterfly farm and got to see the assassin bug that causes Chagas disease… a big ugly critter… and then we watched hummingbirds feeding in a garden. Whilst there, some very strange furry animal called a coatimundi which was about the size of a dog ambled out of the bushes straight at us… it had the head of a fox, the body of an anteater and the tail of a monkey… too weird. 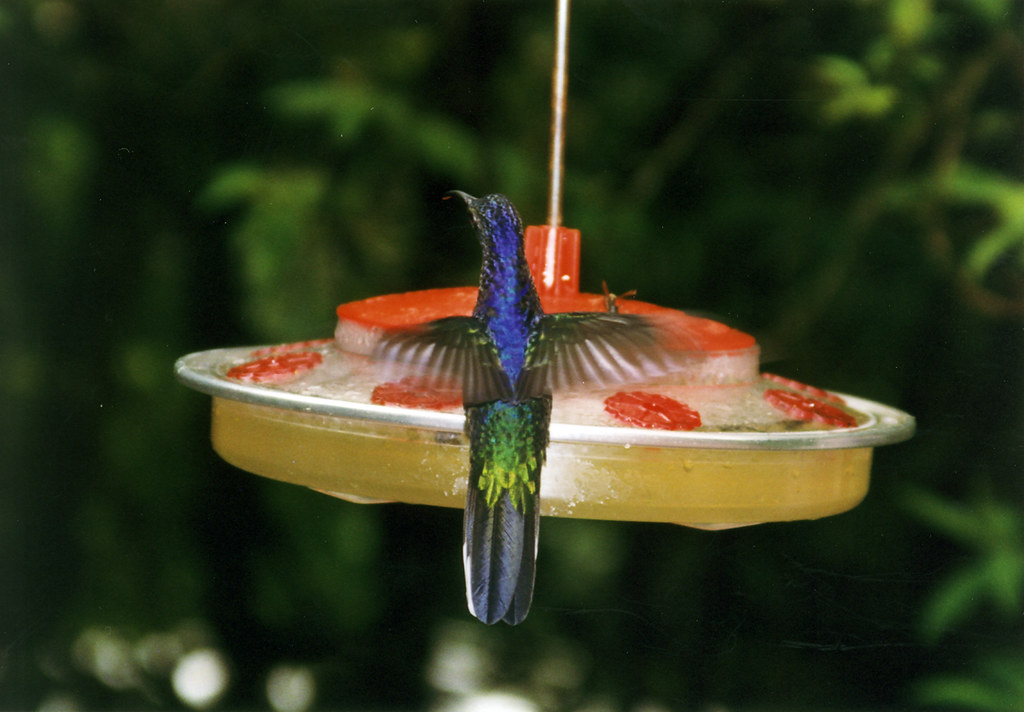 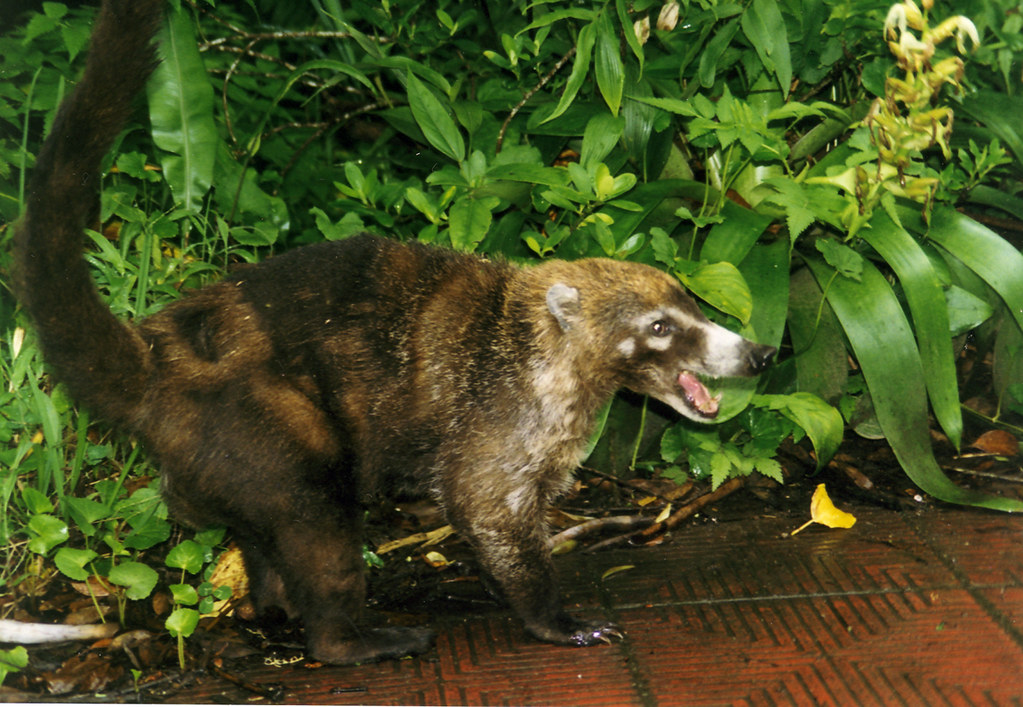 It sniffed us for a while but obviously realised we hadn’t changed our underwear and socks in a while, so it left and escaped with it’s life… phwew!!!

Best of all though, we did a fantastic walk on a sky walk bridge system built 40m across the canopy of a cloud forest… It was totally beautiful… even if we didn’t see any dinosaurs!! 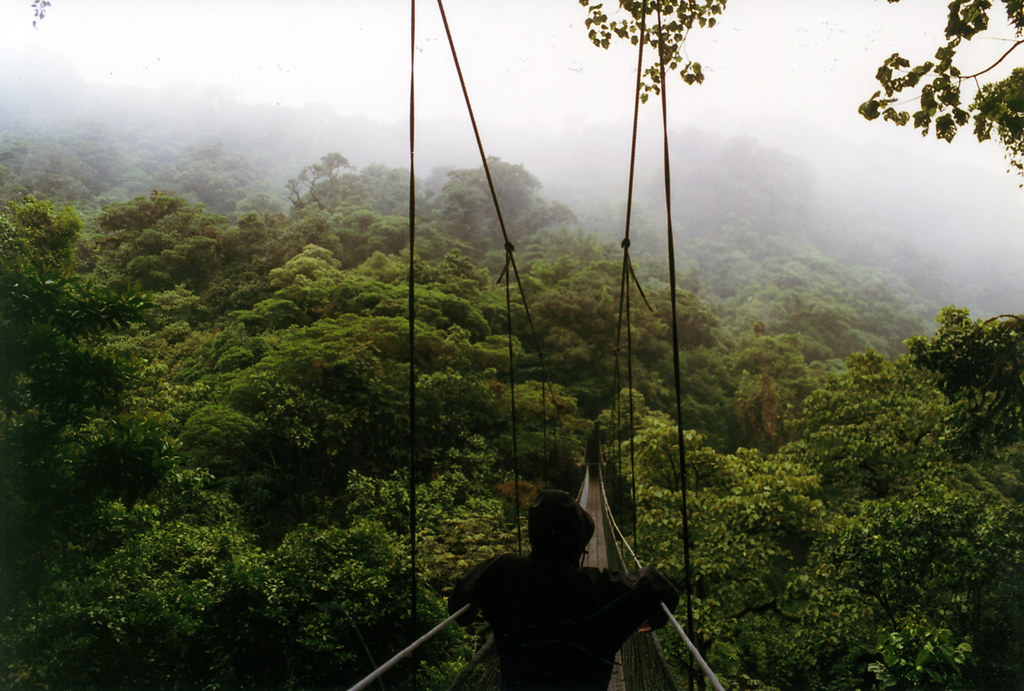 Bird watchers come here from around the world with their hubble telescopes to glimpse the Resplendent Quetzal (who comes up with these silly names anyway???).

Well we looked, but didn’t see it, but we reckon it’s probably similar to the indulgent hoogalie boogalie bird of wee wee land……….

Our tranquility was shattered coming back to San Jose though. We arrived at 8pm on a rainy Sunday evening and for some stupid reason the bus terminal is in the very dangerous red light Coca Cola district that we’d heard heaps of bad things about.

All the locals got off in the rich outer suburbs, but naively we went to the terminal in the centre of town. Well there was not a taxi in sight… we learnt later they don’t like to work on Sundays especially in the redlight district…. so we thought we’d walk to find one.

We walked a couple of blocks when all of a sudden half a dozen drunks stumbled out of hotels and started yelling to us that we were in extreme danger and we should leave right now!!!!

Needless to say we were so scared that by then we were running by far faster than a very fast thing that’s actually dead…. which is probably not very fast…. i guess…

We eventually made it to some lights and unfortunately drunk locals who then started pulling at us to follow them down dark alleys… all very scary… We thought we’d have to go the biffo!!!!

The only taxi driver there refused to take us because we wouldn’t go to his hotel, so we had to give him 5 times the amount to take us out… all up it sucked!!!!

The moral of the story is if you know you’re going to arrive at night to the Coca Cola bus terminal area of San Jose, get off in the rich outer suburbs… it’ll be cheaper and safer in the long run!!!!

Well by then we were pretty pissed off and left. We then did a quick stopover in Managua the capital of Nicaragua, which was a weird city full of destroyed buildings and statues due to earthquake, fire and war. We sat in the bell tower of a cathedral destroyed by earthquake and watched an electrical storm form over some volcanoes and roll over a lake… that was beautiful!!!!

Next we then went to Tegucigalpa, which is the capital of Honduras and wins the prize for silliest capital city name… a very forgettable town. So we then headed to Northwest Honduras to Copan which was stunning!!!

The Mayan ruins here are from a succession of different Kings including the funkily named King 18 Rabbit!!!! Man, the statues of the kings were the most spectacular Mayan statues that we had ever seen.

It would have to be the most dangerous and despicable city so far on our trip… Guatemala really only finished it’s civil war last year, so all the police and guards carry the biggest machine guns I’ve ever seen!!! Stories are everywhere of tourists being raped and killed… so everyone stays in the more tranquil town Antigua.

However arriving here in Antigua, we heard of hotel owners stealing stuff from people’s rooms, and as sure as shit our hotel manager broke into our room late at night while we were actually sleeping!!!!

Luckily we woke and he made a lame excuse and left… the next day though, he accused us of not paying!!! Well, that was the last straw! Avril took a proton pill and totally went to town on this guy!!!!

She was yelling at him so hard that even I almost started crying!!!! It was pretty damn funny…..

However, and now the whole of our hotel including us have diarrhea and they’ve shut the down the water supply to the town…. WE WANNA GO HOME!!!!

Tomorrow we fly to Tikal some ruins in the east and hopefully should be in Mexico by the end of the week.

Central America is certainly a lot more dangerous than South America, and we now appreciate how safe and sound we were back then. However, it’s not that bad… we just haven’t had enough time to enjoy it and right now we’re pretty travel weary so we’re not dealing with all this shit real well… Also we found we actually get a much better reception when people find out we’re not American!!!!

Our recommendations are Hotel Asia in San Jose (a few fleas but in a good area of town at a good price ), Hotel Central in Panama City (as good as you’ll get for the price $US6 pp), Posada Ruiz 2 in Antigua for the budget option (you can put your own lock on the door here!!), and Hotel Iberia in Tegucigalpa… oh and try and buy the central handbook ($US29) in San Jose, not Panama. Much better than the Lonely
Planet.

Well heaps of gooshiness to everyone

PS Click on the respective countries for the pics of those countries. Panama, Costa Rica, Nicaragua, Honduras

John and Liz…… you guys sound like you had a hilarious time in Huaraz… you put us to shame with all your hiking.. are you coming up to central???

KP…. well I do believe KP that we were not able to meet Kim’s girlfriend or get her to sing the norway national anthem… but patrick should have so have to get the dirt from him…. had a great night with patrick and his squeeze christine (hi christine if you read this!!), kim and some others… got VERY tipsy on a drink called kay pirahna made from rocket fuel

Sonia….. WHAT!!!! the big A is a paedophile?????!!! we pissed ourselves laughing when we found out!!! We caught him downloading stuff in the foyer when we came back from antartica late one night… have they shut the hostal??? We feel really sorry for Sebastian though.. he was so nice… keep us in the gossip and say hi to silke.. good to hear from you

Peter Erskine and Liz…. you guys are actually working in Uganda???? We are soooo jealous

All you people who haven’t written…. write or I’ll sick Avril onto you!!!!!