Hola to all you funky monkeys and secret squirrels…

Well, we are currently in Granada, a totally funky town in Nicaragua and we are definitely the funkiest monkeys in town after flying on a zipline through the canopy of rainforest down one side of the bigarsed Mombacho volcano. 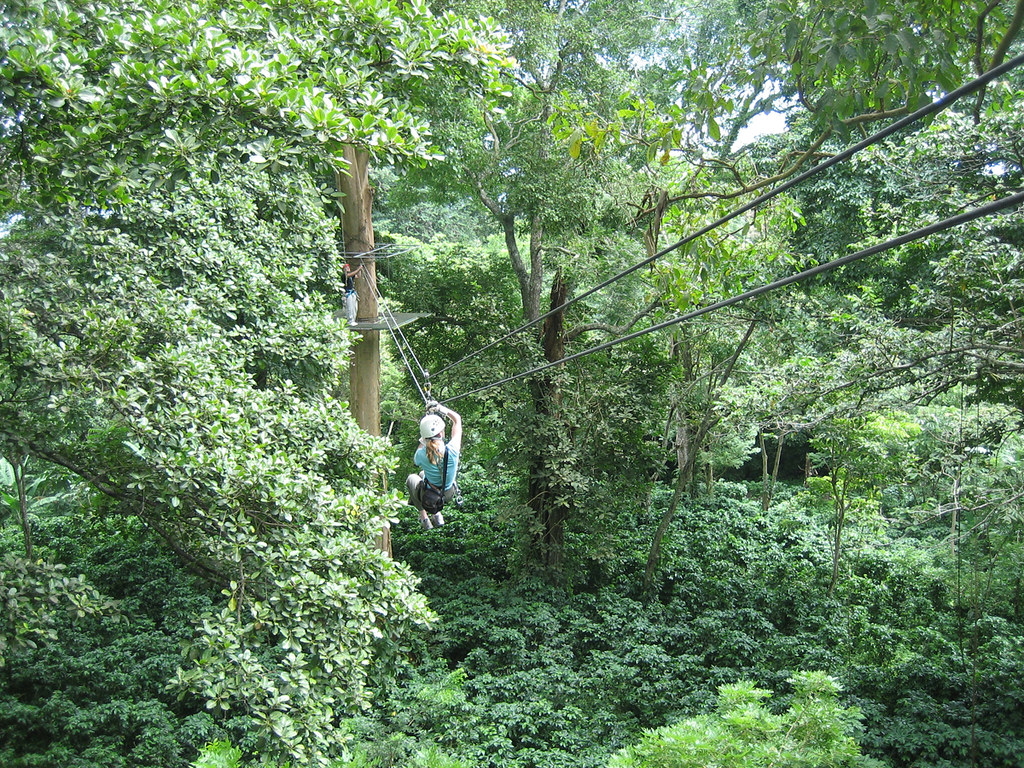 Man… it was so cool flying through the trees, that we totally thought we were NINJAS because we are pretty sure that if NINJAS had to get down a volcano, that they would DEFINITELY fly too…

And we have to tell you that Nicaragua has completely blown us away in how totally WICKED FUN this place is… Dudes, we had no idea that there was so much to do here…

When we first came here in 1998 we were only passing through from Costa Rica to Honduras and we only spent one night in Managua the capital, but even then we were completely intrigued at how interesting the country looked.

Nicaragua is the poorest country in the western hemisphere second only to Haiti and back then we were so impressed at how DEVASTATED the country looked. It was so poor that the main highway was full of potholes and earthquake cracks that the government couldn’t afford to repair so the local kids would fill the holes with rocks and then try and hold ropes across the road to get passing cars to give them some money for tips.

Not only that, but when we got to Managua the capital, we found a city that had been repeatedly devastated by earthquakes, volcanoes, fire, civil war and hurricanes and because of US sanctions during the Iran Contra War, the government was so poor that they couldn’t repair the damage so the centre of this amazing capital was literally a desolate ghost town… a bit dangerous and definitely fascinating…

The other cool thing we noted back then is that Nicaragua lies on a major fault line so there are more than a dozen volcanoes all in a row over a distance of 300km so that’s almost a volcano every 30km… and many of these are active too!!! So our first impression crossing the border from Costa Rica in 1998 was seeing 2 massive volcanoes rising up from the middle of huge lake which was just breathtaking… so we knew we DEFINITELY had to come back someday!

And coming back, we were expecting a depressing but interesting country, so we have been COMPLETELY AMAZED at how fun and friendly this place is!

On arrival, we were told that Managua is a bit of a shithole, so we headed straight to Granada which is a cool colonial town with a great vibe AND is full of bohemian hippy expats, tanned SPUNKMUFFIN backpackers and BUFF surfers. We’ve also been totally pigging out on pancakes in great art wanky hippy cafes and not only that, we also found the most amazing backpackers hostel we have ever stayed at called Hostel Oasis.

And not only have we CHILLED out like a chilli thing, but we’ve also done some way cool stuff like kayaking around some islands on a massive lake at dawn to see the birds wake up, and climbing 2 volcanoes one of which was active. We also had to make a mental note that active volcanoes don’t normally have trees so climbing 6km up them in the direct tropical sun really SUCKS!!! 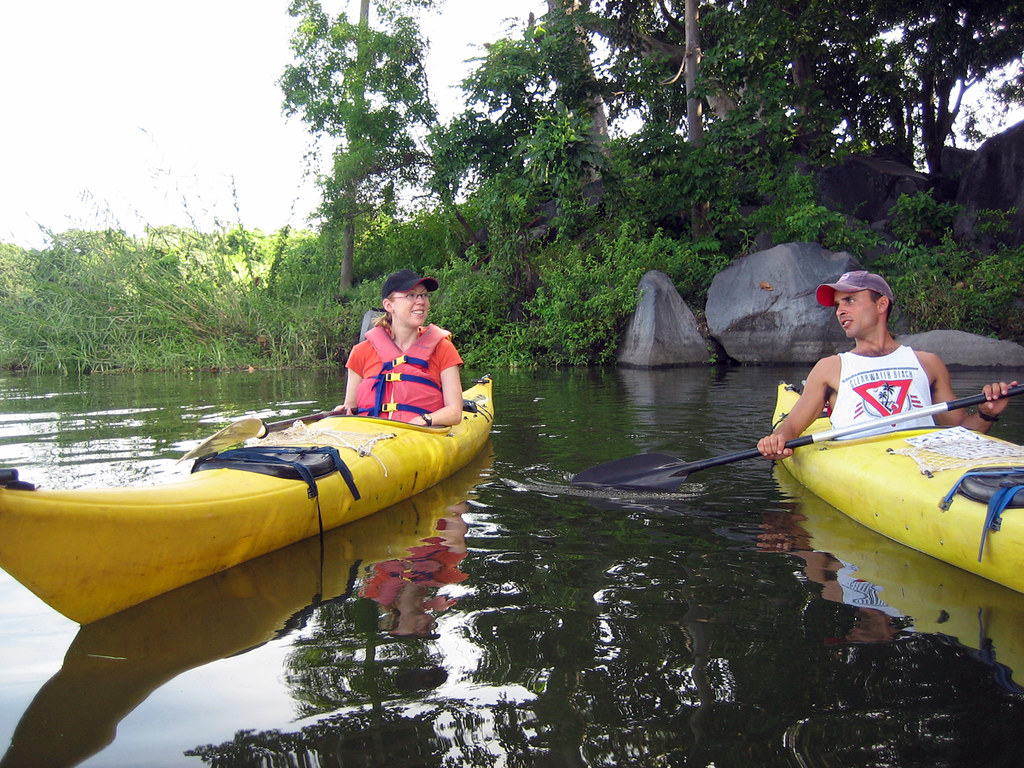 The most coolest AND wierdest thing we did though was to go to Laguna Apoyo a crater lake just outside of Granada. The lake is 6km across and the water is so clear and pristine and it’s really cool as it is actually lower than sea level. 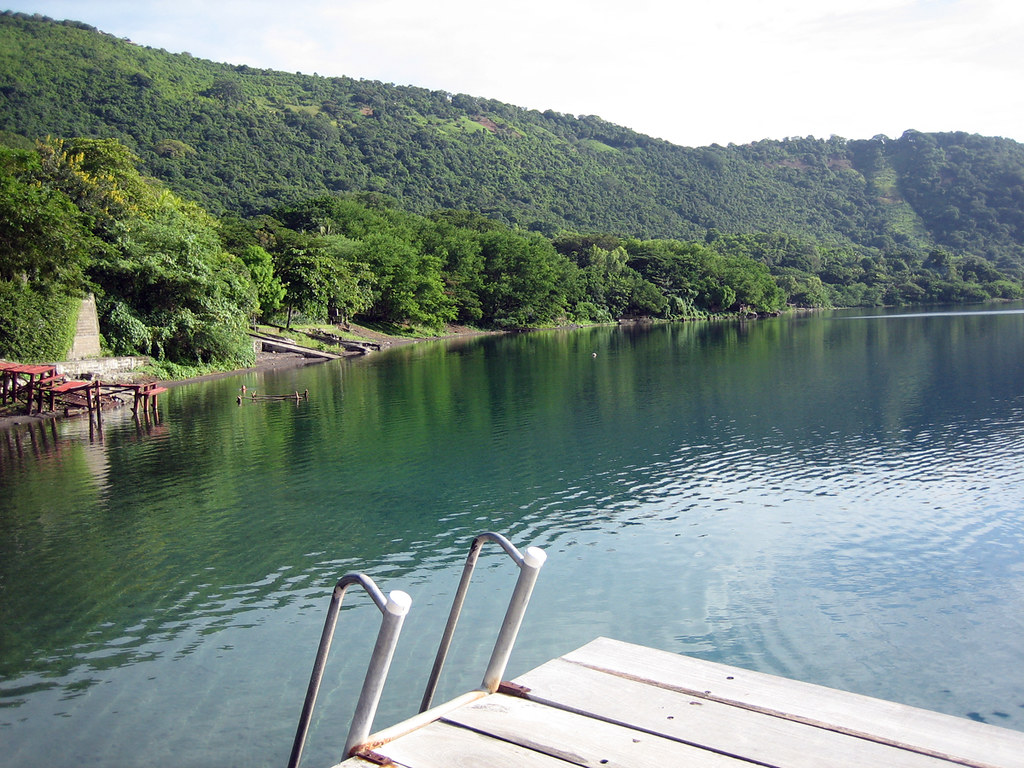 We stayed for 3 days here as it was one of the most relaxing places we have ever been to, but unfortunately, our first night is when we experienced our first ever FROMAGE A TROIS…

When we got there, we were IMMEDIATELY IMPRESSED when a spanish girl just dumped all of her clothes to go for a butt naked swim. We were even MORE IMPRESSED, when she then got out and went for a butt naked kayak.

But I COMPLETELY FELL OUT of my inner tube when another topless spanish girl then joined her for a sunbake AND they lay there butt naked playing with each others nipples right in front of all the backpackers!!!!

And then just after climbing back into my inner tube, a spanish guy joins them and by then we realised that they were a travelling backpacker FROMAGE A TROIS… which for those puritans out there, is a CHEEZY Menage a Trois…

Now NORMALLY, we would find such a public display of 3 way spanish thespian luvin’ possibly a bit arousing… but these 3 were so obnoxious and disrespectful that we really wanted to get away from them!!!

However, just when everyone went to bed, the guy and one of the girls then decided to bonk loudly on the verandah just outside the window of the dorm, AND THEN they came in the dorms which was full with 7 people and bonked AGAIN kicking one poor guy in the head whilst coming!!! And WORSE STILL, they then lit up a postcoital smoke in the dorms and choked everyone out!!!

Well, like a lot of spanish women, one of the girls definitely didn’t shave, so she had the biggest clump of 70’s bush pubic hair that I have seen since the 1979 Farrah Fawcett special edition of Playboy!!! So as they were leaving we really were hoping and praying that they would all choke and die on 70’s bush furballs!!!!

But despite the fromage a trois, Granada has been amazing and now after 7 days here we are going to pull ourselves away and head south to climb another volcano on Ometepe Island in the middle of a massive lake, and then we’ll head to the surf beaches for a good surf perve!!!

We haven’t loaded any pics yet cause we are just having too much fun, so we’ll do them with the next travelog… and no I didn’t get any fromage a trois pics for those sickos who would think that I would do such a thing… actually… the zoom wasn’t strong enough which is the real reason…

Lots of love and thespian fromage

Ced “I didn’t know that there were thespians in Spain” Chu
Avril “Don’t look at me, I didn’t even have bush in the 70s” Bowie

PS Trips stats. Hostel Oasis in Granada ROCKS. Gotta recommend it! $USD45 for a kayak tour and a canopy tour is worth doing. Volcan Mombacho check the truck times before going there otherwise it’s a really long walk. Volcan Masaya… don’t even think about walking up like us… it was horrible… hire a cab from Masaya for a few hours. Laguna Apoyo… definitely stay at the Monkey Hut for a couple of days as it so relaxing. Really cool monoliths at San Francisco Church museo… on par with Mayan stuff.

PPS Thanks to Daniel Farley for the Nicaragua advice.