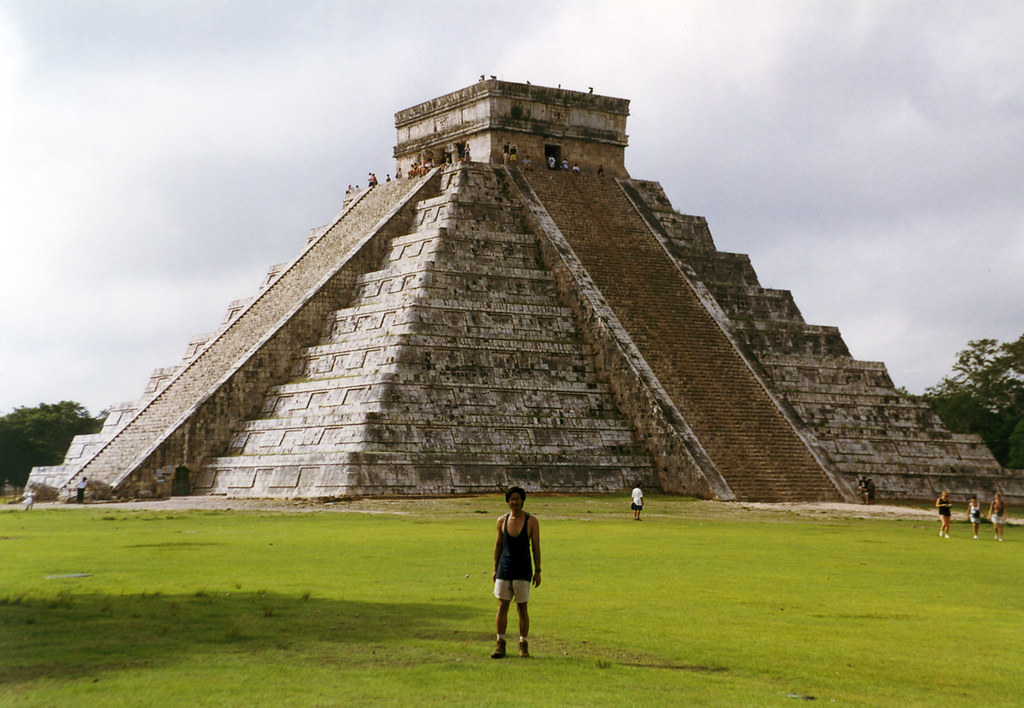 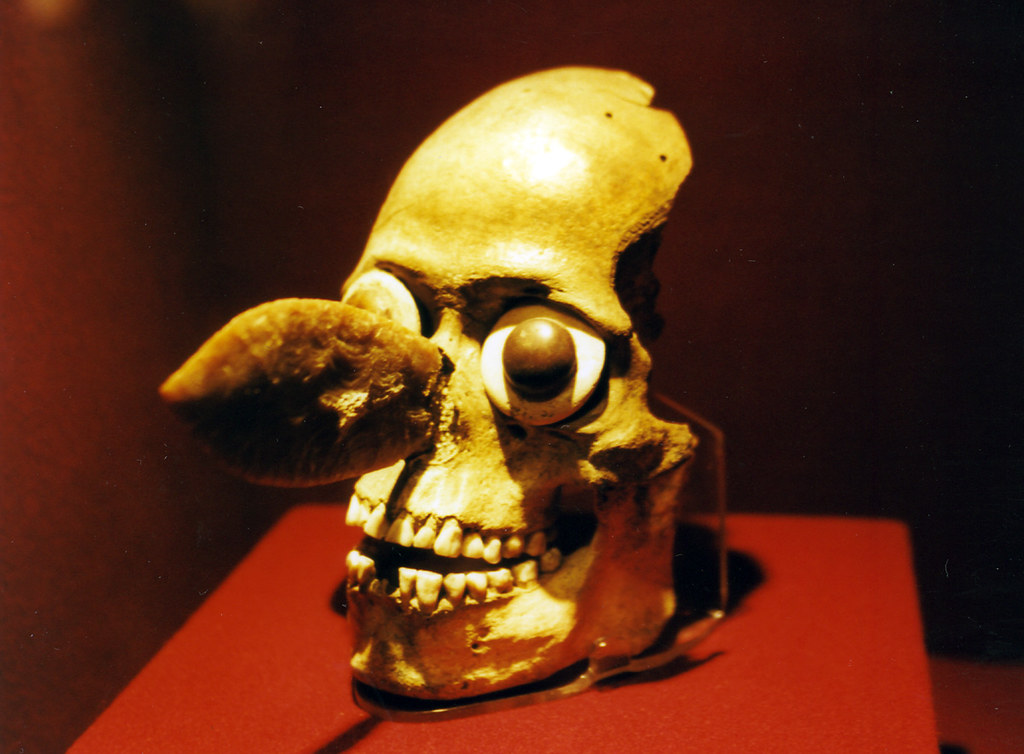 Well here we are in Mexico City, which is apparently the third biggest city in the world, and it’s pretty fantastic…

However, from the response of our last letter, it sounds like we freaked a few people out about Central America… Well all we can say is… don’t listen to us…

Although Central is a little more dangerous than South America, it is a beautiful place that we’ll go back to one day. We just ran into a lot of hassles in a small amount of time so it jaded our experience…. still watch out for that Chagas disease bug… It’ll definitely bite your balls off!!!!!!…

Since our last letter, we left Antigua in Guatemala and flew to Tikal an absolutely amazing Mayan city in the eastern Guatemalan jungle…

It would have to be one of the most amazing places we’ve been to… Tikal is a huge Mayan city that you can climb to the top of the pyramids and look out over other pyramids that tower above the tree line of a jungle that has more wild life than we’ve seen in any other reserve… including the Amazon.

They used an image of Tikal at the end of Return Of The Jedi where x-wing fighters fly over the Ewok city.

The pyramids are separated by paths in the thick jungle where you rarely see other people, only spider monkeys swinging in nearby trees and toucans swooping over your head and coatimundis (anteater type things) scurrying past your feet…absolutely splendiferous!!! 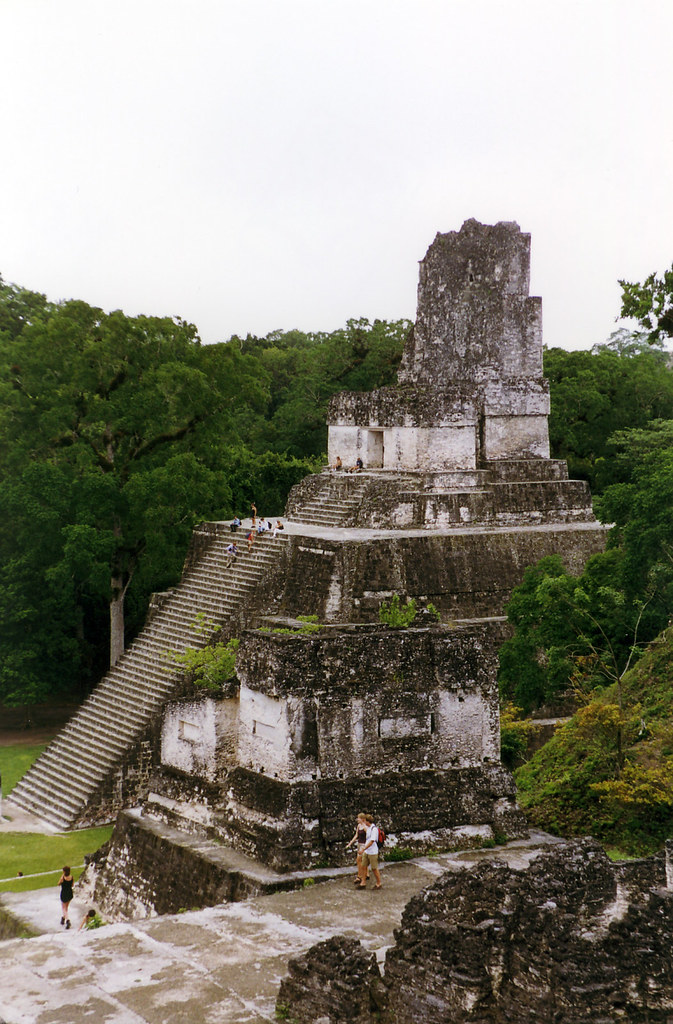 At one point we were trying to sneak into an excavation site (templo V for those who’ve been) when all of a sudden a family of howler monkeys started ambling across some branches above our head… Well, they were big black furry things but the male had the biggest white testicles we’d ever seen… needless to say WE HAD TO GET A PHOTO OF THOSE!!!

Anyway, I had just focused in and was happily snapping away some shots of this chappy’s fine gonads when all of a sudden something hit me hard in the shoulder…

Well I think to myself… Holy shit… They’re throwing things at me…. but then I looked up and strewth almighty… the female was actually pissing AND shitting on my head!!!!

Well needless to say I was not impressed and although I meant to say “Please Mrs monkey could you stop voiding on me”, …it kind of came out as… “What the FUCK… you fucking little SHIT!!!!!!???????”

Avril thought it was all pretty funny, but that was until we realized there was no shower and she had to sleep in the same tent as me…. Nyahhh Hahhh…

Well, we spent a beautiful day otherwise and watched dusk settle over the jungle from the top of one of the pyramids.

From there we made a direct bee-line through Belize into the south of Mexico which was definitely the easiest way to get from Guatemala to Mexico in one day.

Well, so far, Mexico is an absolutely fantastic country…. really easy to travel in with friendly people and some of the most spectacular archaeology and colonial towns we’ve seen… even surpassing Peru!!!

And the food is great!!!! We’ve resigned ourselves to getting fat here… next time I’ll bring anti-cholesterol tablets!!!

We bummed around the Caribbean coast for a few days in the towns of Tulum and Playa del Carmen sipping coronas and kahlua on the turquoise water of the Caribbean sea… It was totally indulgent, but it well and truly cured our travel weariness… Yes, we are all enthusiastic and pumping again…

And thanks to all those long term travellers who emailed us about their travel weariness… It made us feel better that we aren’t the only ones.

Well we’d also have to say that Tulum is one of our top 5 favourite beaches in the world now. We slept in cabanas on the beach with crabs nipping our feet all night but it was awesome!!!

From there, we went to Merida where unfortunately I ended up having a few very scary days in hospital… Sorry to all the non- medics though as this story will make more sense to the docs out there….

I developed symptoms suggestive of appendicitis and since everyone knows that doctors never get sick, I put it off… Needless to say having surgery in a non English speaking hospital absolutely terrified me. However after discussion with the cheap skate insurance company, I ended up being admitted to a government hospital for observation.

That really strained my Spanish, but thank god that most medical terms are Latin!!!!

Well the doctors were definitely top rate doctors, but the nurses were down right scary…

Firstly, although I had an acute abdomen and fever and was tachycardic, they only took my observations once in 12 hours, and then the nurse who put my IV drip in couldn’t get into my veins which I thought was totally LAME since I have huge veins…

Well when I looked, it was because she’d put the tourniquet on so tight that she’d cut off my arterial supply and collapsed all my veins…

Then even worse, a young nurse took my pulse just proximal of my carpal tunnel where there isn’t a pulse, so I think she made up my pulse rate and wrote down just any shit!!!

… And then they tried to feed me when I was suppose to be nil by mouth …Aaarrrgh!!!! I really appreciate the nursing care we have at home now!!!!

At that stage, I was absolutely petrified at the prospect of needing surgery… and then things got worse…

Over the day my fever went over 40 and the pain and rebound tenderness moved to my right upper quadrant of my stomach with so much shoulder tip pain that I could barely breath and on chest x-ray I had a splinted right hemi-diaphragm… Well, by then I’d developed the most perfect Murphy’s sign you could imagine so all the medical students and residents started popping out of the wood work to poke and prod me… just to get me back for when I was a student!!!

Well they started mumbling about cholecystitis and liver abscesses and naming weirdarse parasites with big names that I remember reading about in med school and thinking “I don’t need to know that… it happens in other countries…” DOH!!!!

And then when they decided to shower me the took me by wheelchair to a big shower room that looked like a tiled gymnasium and then the nurse made me stand up holding my IV bag and then went to a far side of the room, pulled out a hose and just stood back and hosed me down like you would when cleaning your car. Holy crap it was like I was in some sort of concentration camp.

Well by then I was packing shit and then when Avril called home to organise some money, our friends decided to play a joke on us and told us that the police had been looking for me in Australia because of one of my patients who died just before our holiday.

Well that was the final straw. I checked myself out of hospital and decided that I would aim at flying out to the USA for an operation but holy crap… within 24 hours the infection backed off.

Personally I think it was probably an alien virus from eating that iceberg in Antarctica, so I’m waiting for an alien to explode out of my gut onto Avril’s face…. But the moral for all you medics I guess is that colitis can present as peritonitis… I really need to claim this holiday on tax!!!

Well, the rest of our Mexico trip was spent doing the gringo trail in the south of Mexico… for those following…. We got Olmec head in Villahermosa which are massive stone heads thought to represent Africans who really shouldn’t have been in Mexico and hence is a big mystery. 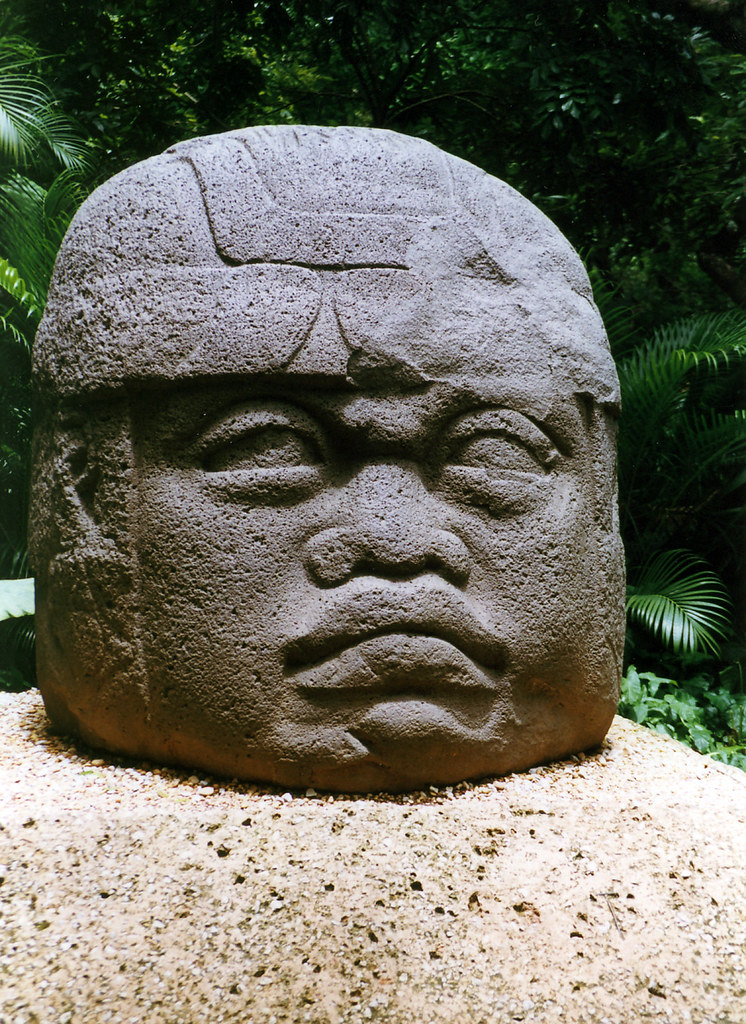 We also checked out Merida, Chitchen Itza, Uxmal, and Oaxaca were all completely funky places to visit with amazing Mayan ruins.

But the place I really wanted to get to was Palenque where a stone image was found that looks like an ancient Mayan at the controls of what looks to be a rocket with flames coming out at the bottom. Man we really need to make an X-Files episode starring Ced and Avril. 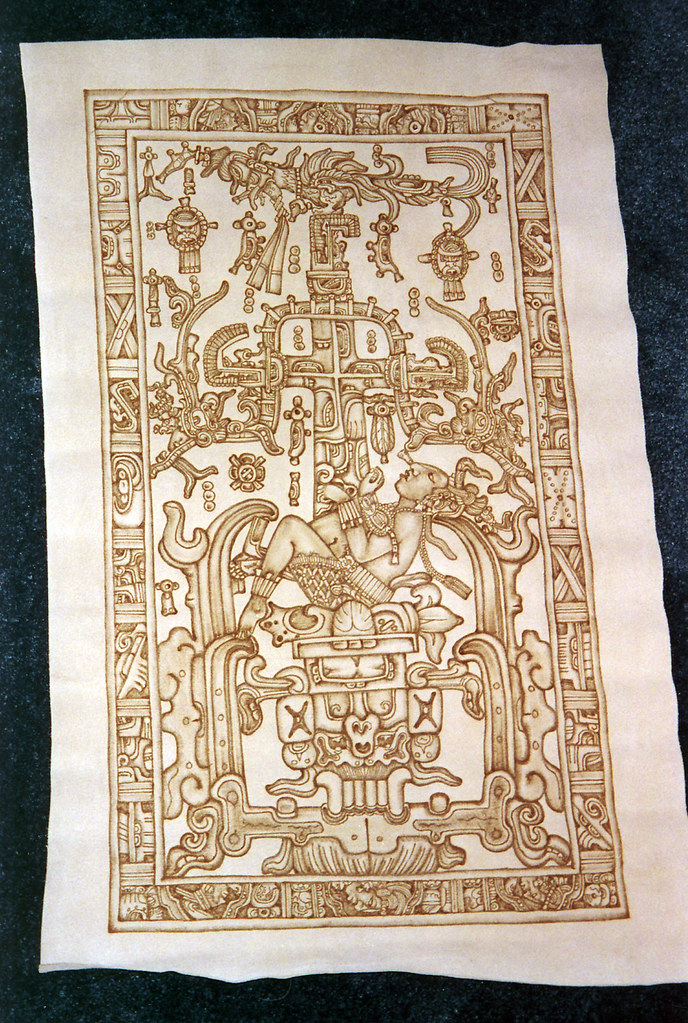 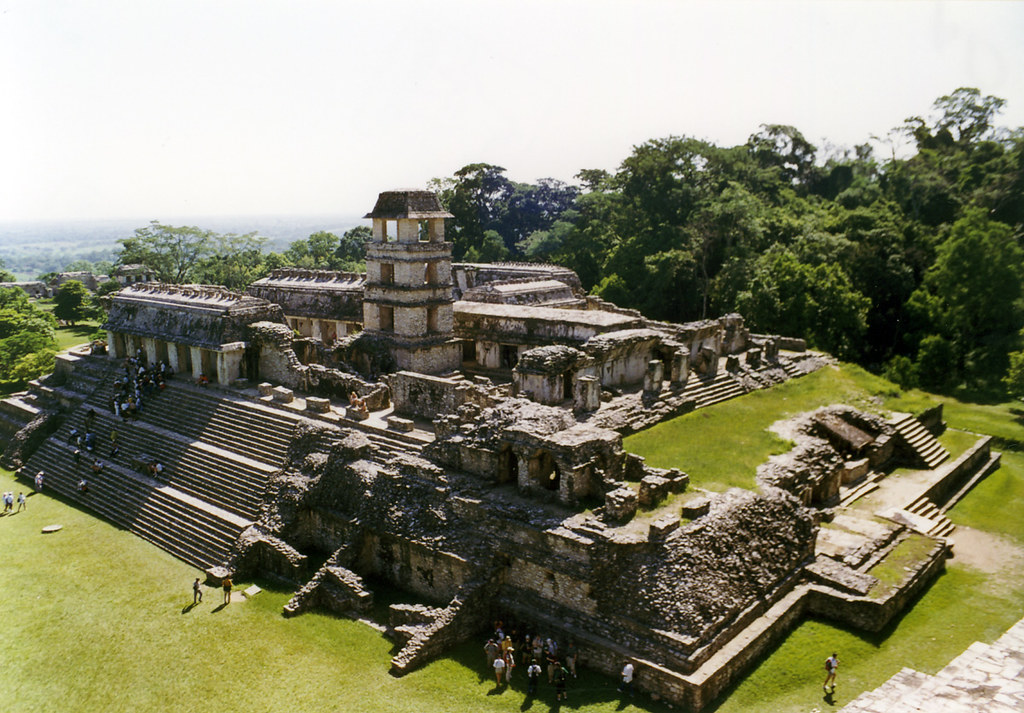 We also avoided zapatista rebels and went to San Cristobal de la Casas which was the most relaxing beautiful and colourful colonial city we’ve ever seen… Better than Cusco and Antigua. 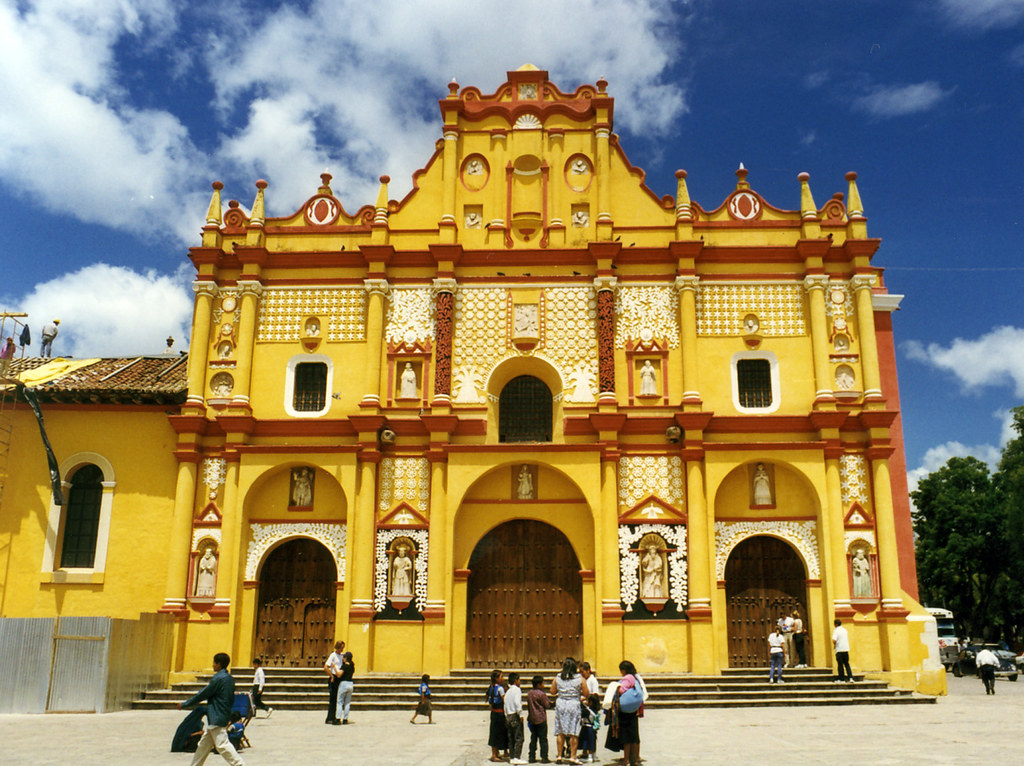 And now just when we were beginning to understand bad Spanish rap songs, we are leaving Latin America…. We’ll be bumming around Mexico City for a few days but aiming to do a 42 hour bus ride and be in the states by Friday next week… We’ll have to learn a whole new language… American!!!

Anyway adios and smooches and keep those emails coming

PS Here are our pics so click on the respective countries for the pics. Guatemala, Mexico.

Australians… this low Aust dollar is killing us… and now we read that it’s probably to do with Pauline Hanson!!! Could somebody please push her over a cliff or something!!

Nigel and Jacqui…. will be in San Fran the same time as you I think… will try and contact you closer to dates

Geof… will phone you in the states