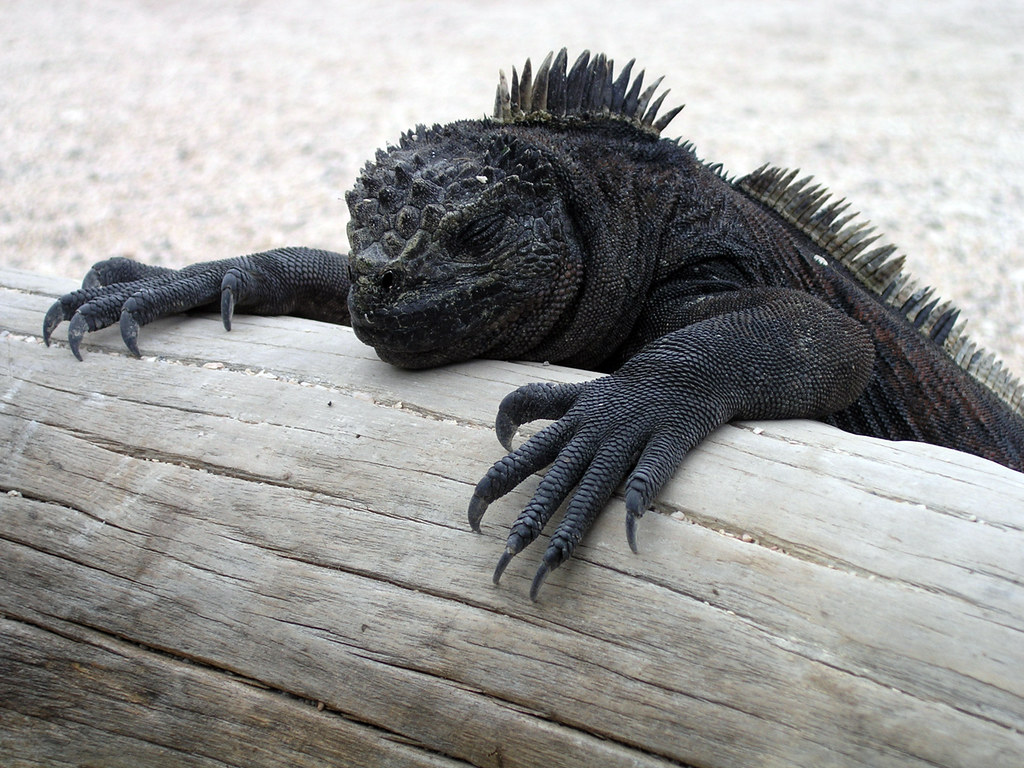 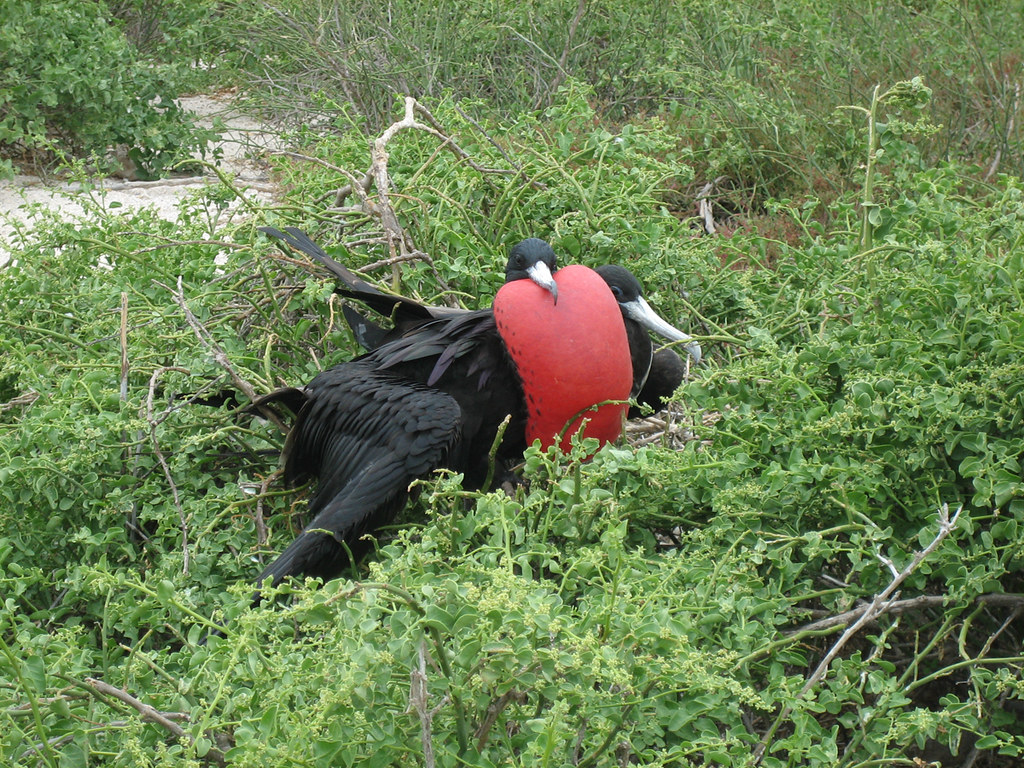 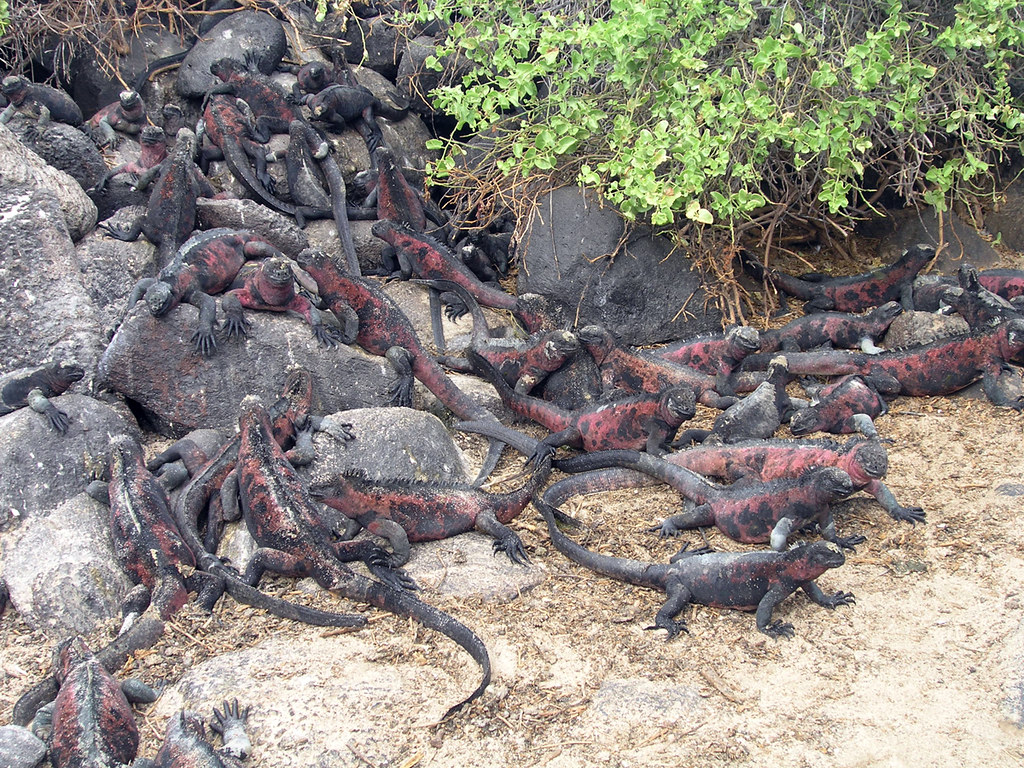 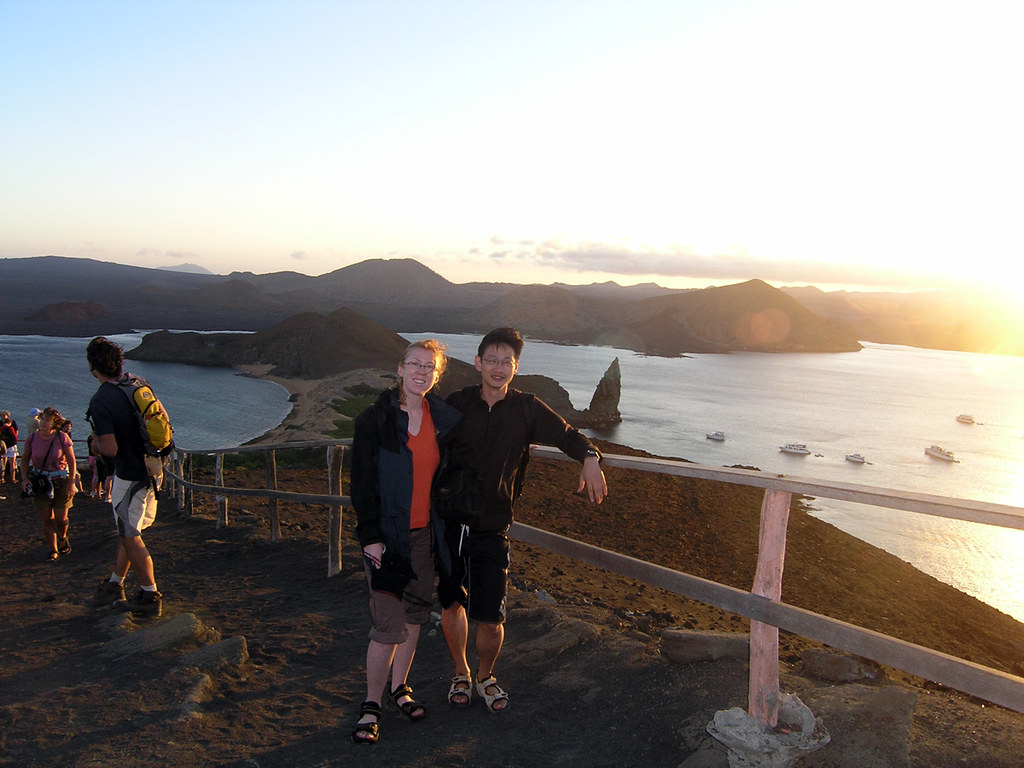 Well we have just arrived back in Quito, Ecuador after 8 days in the Galapagos Islands and if the people bonking in the room next door hurry up and come, then I’ll be able to concentrate and finish this travel log and tell you how much of a fantastic time we had.

…Holy Cow!!!!…..The Galapagos totally ROCKS!!! It is seriously one of the most amazing places that we have ever been too… well not quite as good as Antarctica, but close!!!

For those of you brothers not up to date with the Evolution Revolution, Charles Darwin, the main man, came to the Galapagos and came up with his theory of evolution here.

Apparently, the animals and plants here are totally unique and have evolved differently to other mainland species… that is, they don’t compete with one another. Instead they change themselves to fill gaps in the feeding chain which in geek terms is WAY COOL!!!

We spent 8 days cruising around the islands which are on the equator about 3 hours flight off the coast of Ecuador and the best description we can give you is that the islands are seriously like THE LAND THAT TIME FORGOT… it was totally like stepping back into a prehistoric place.

The islands are really desolate in a prehistoric way and since they are volcanic in origin, the land is made up of jagged black lava rock with lots of volcanic craters all over the place. 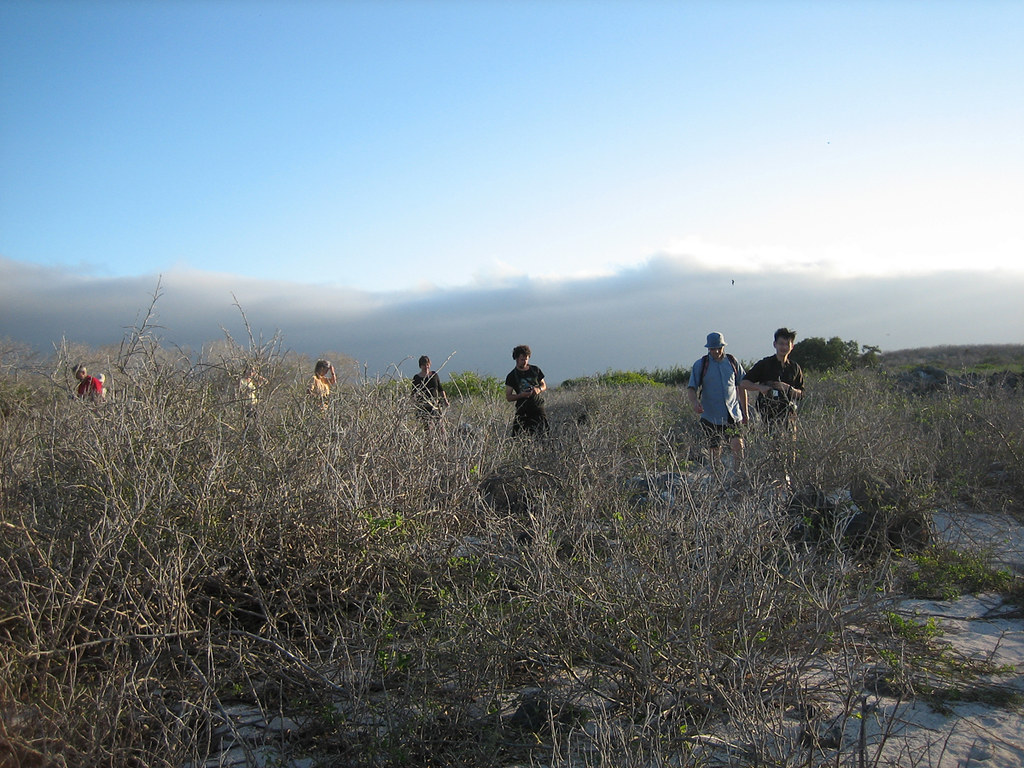 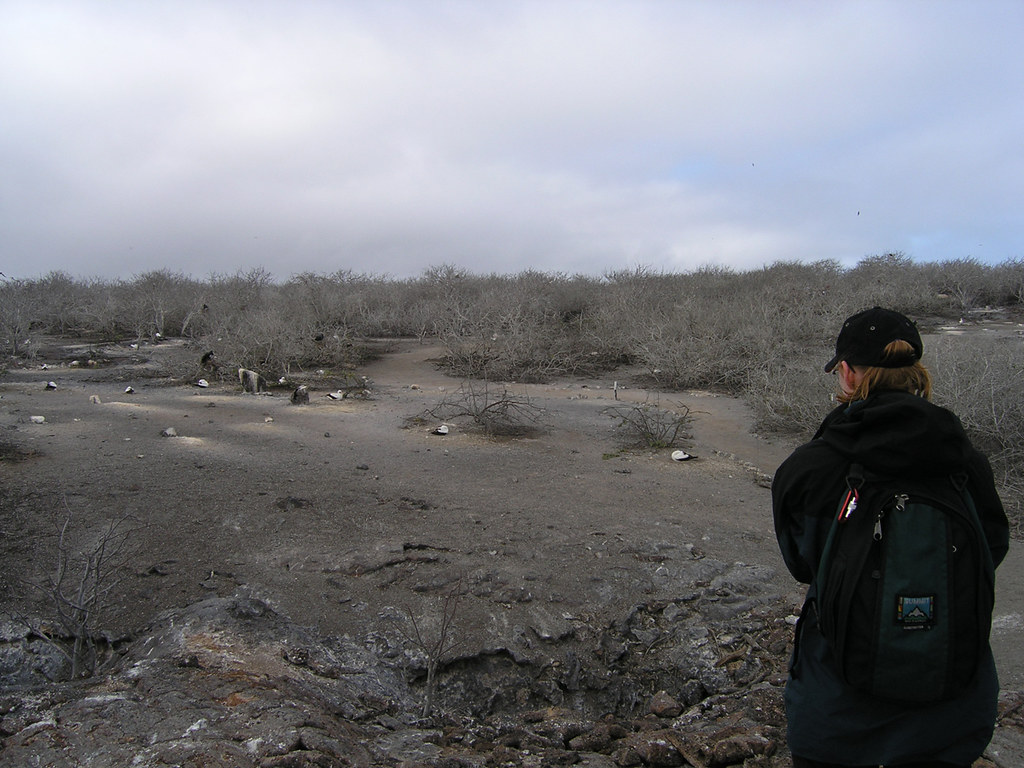 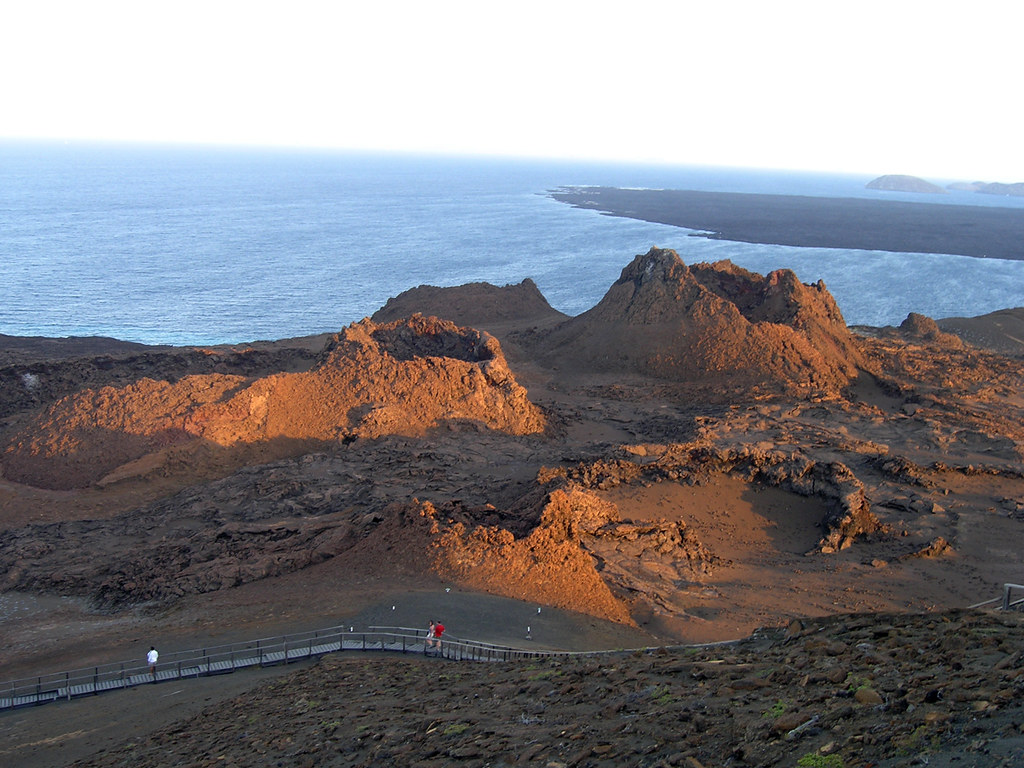 …and the plant life is also really desolate looking with mainly barren leafless dry silver trees interspersed with giant cactuses and really unusual red and green shrubbery. And to make things even more prehistoric, most of the islands are shrouded in an eeire mist and giant frigate birds that look like pterydactyls hover suspended in the air above your head all the time… totally EERIE… 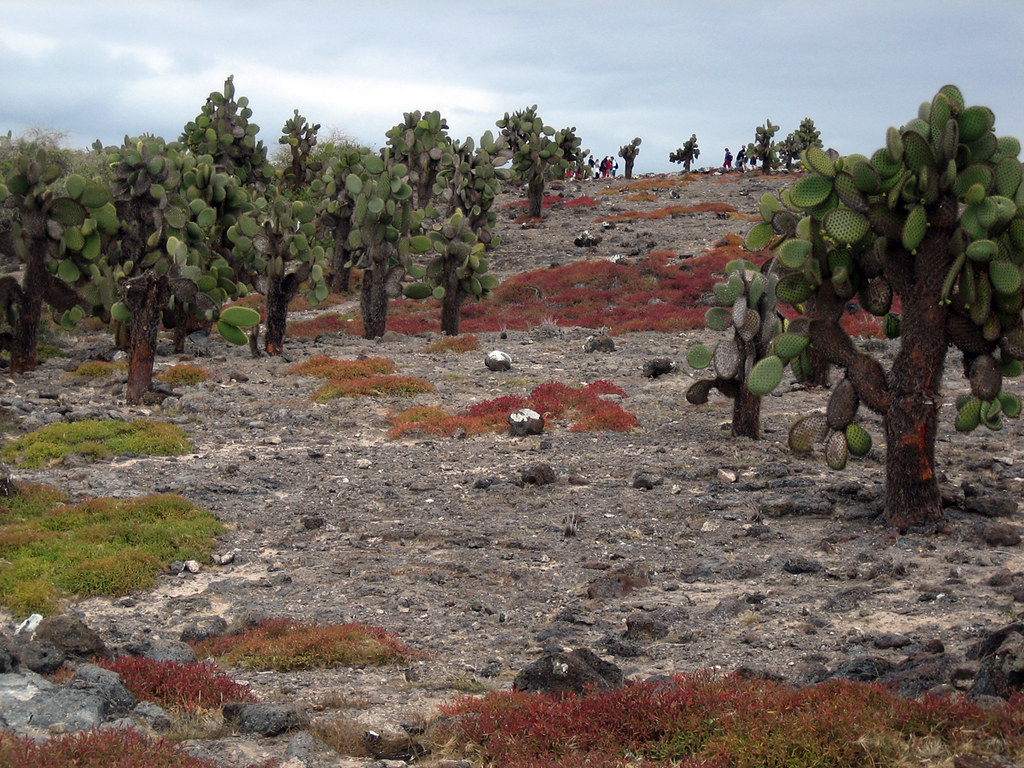 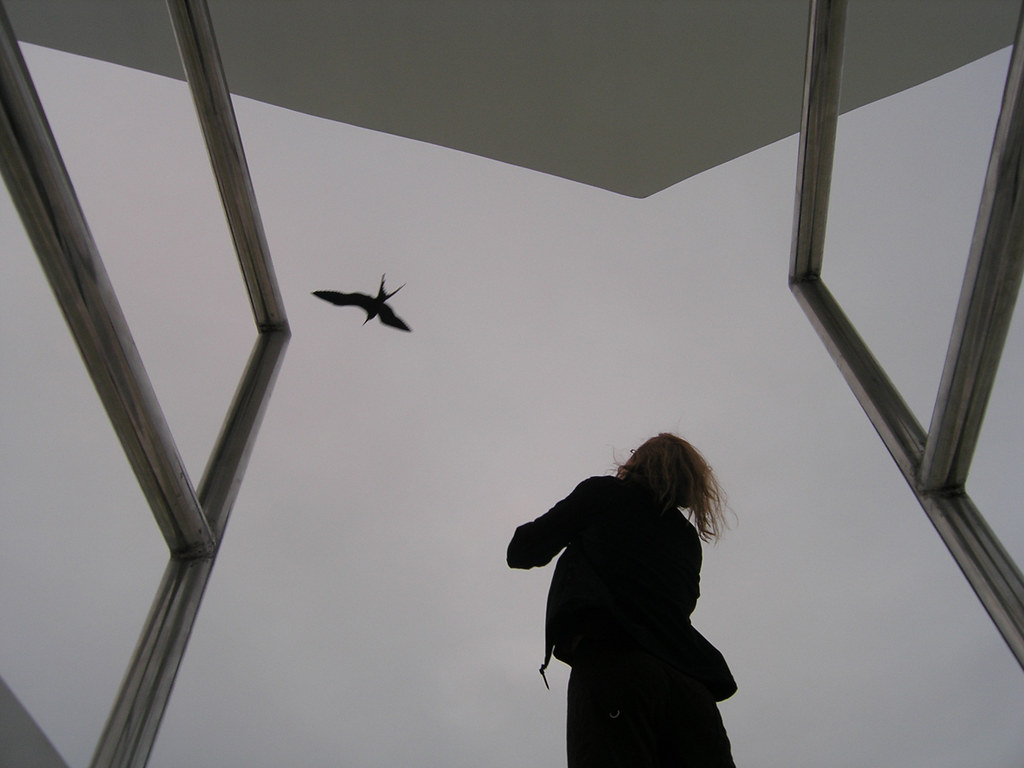 …and although we were disappointed at not seeing any dinosaurs here, giant iguanas roam the land, giant birds nest in the trees and in fact everything is GIANT down here… Now as you know I use the word “bigarsed” a lot, but these dudes are HUGE-arsed!!!! We’re talking huge-arsed cacti, iguanas, tortoises, birds, and sunflowers… 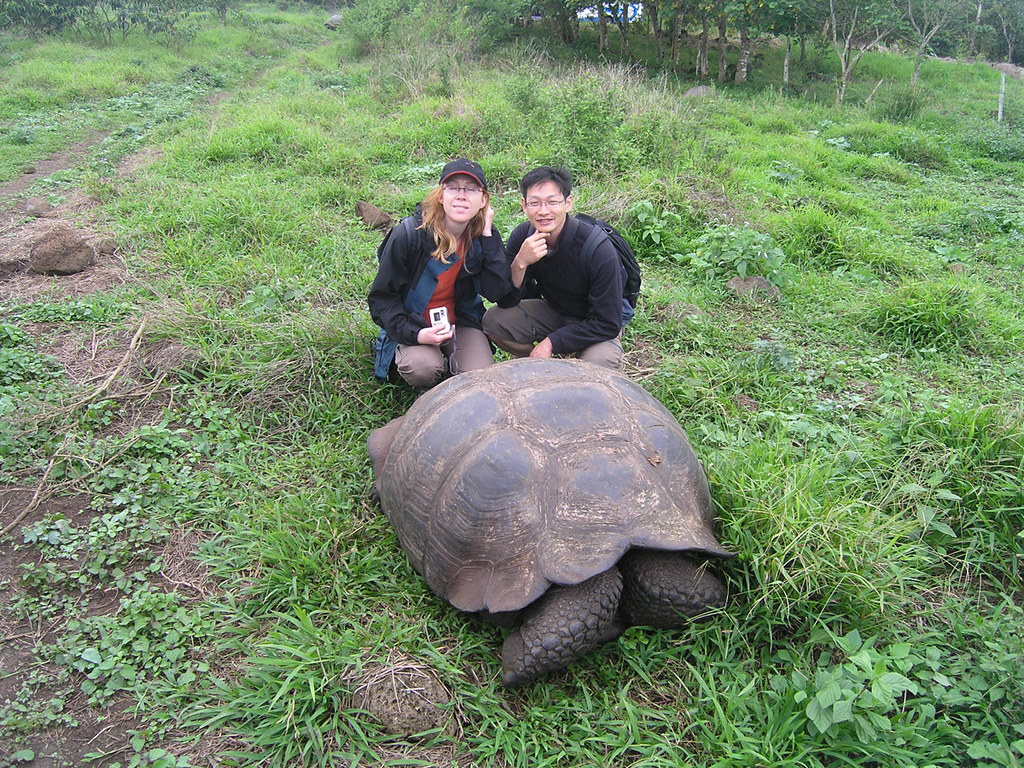 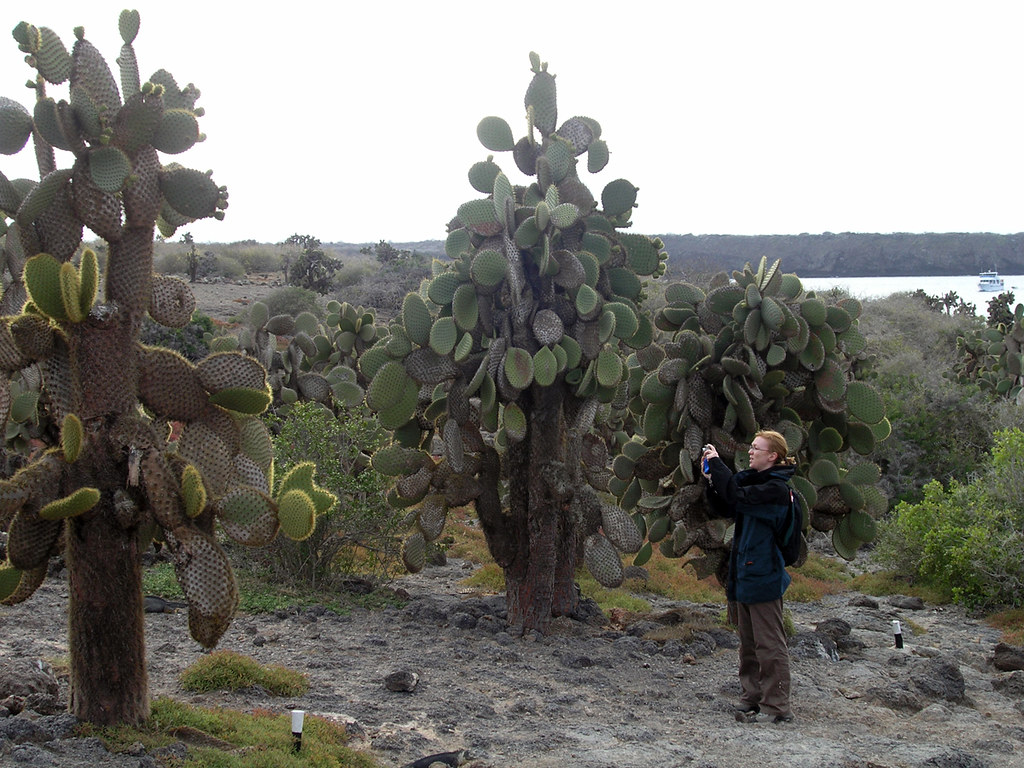 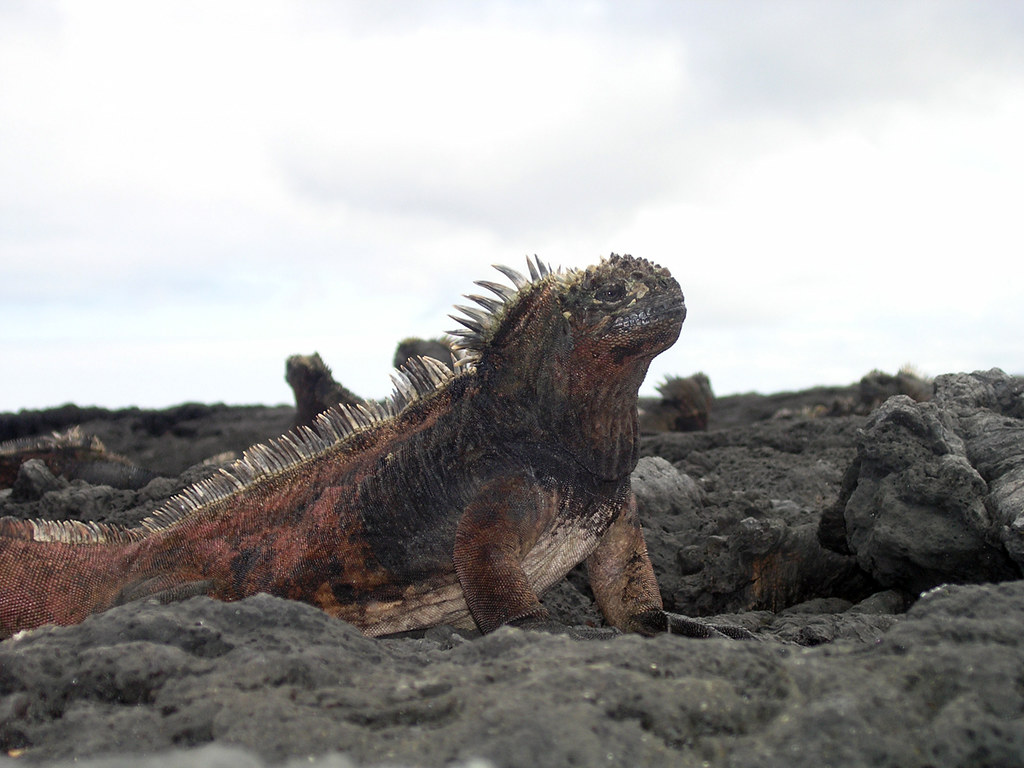 Anyhows, there were so many funky-arsed animals that we don’t know even how to describe them to you so you’ll have to check out our pics of crabs and frigate birds, iguanas, sealions and turtles and tortoises… and not to mention the famous Galapagos boobies!!!

There were red footed boobies, blue footed boobies and masked boobies… in fact if I see anymore boobies this trip, I’m going to totally vomit!!!…Avril’s boobies excepted of course… 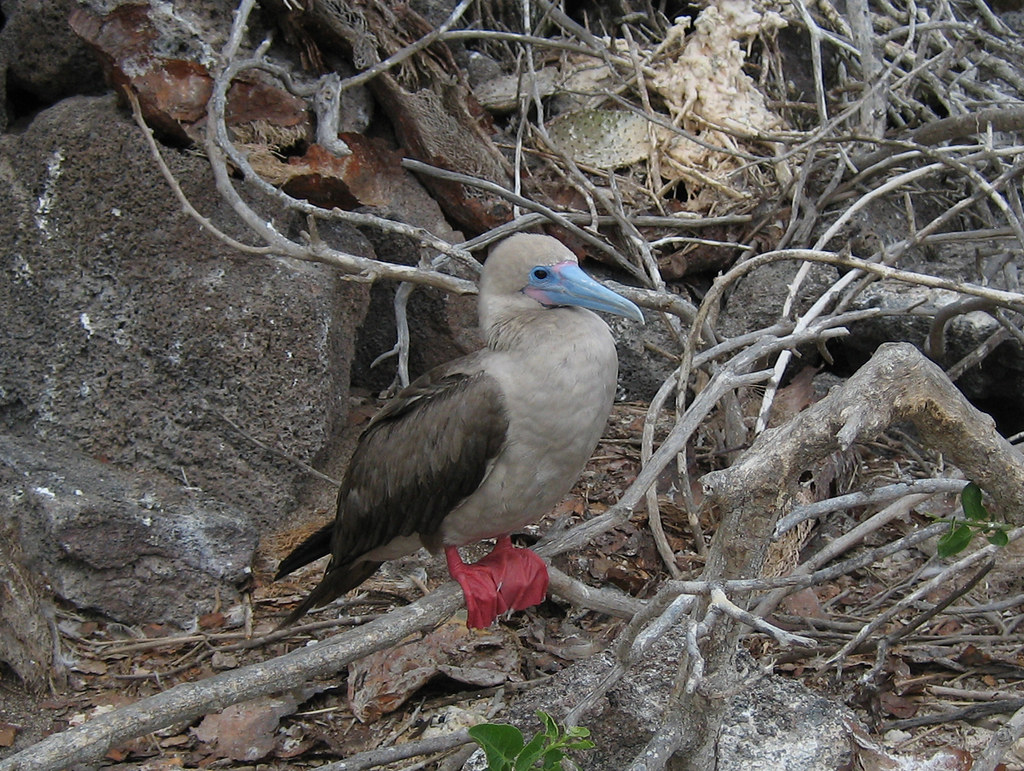 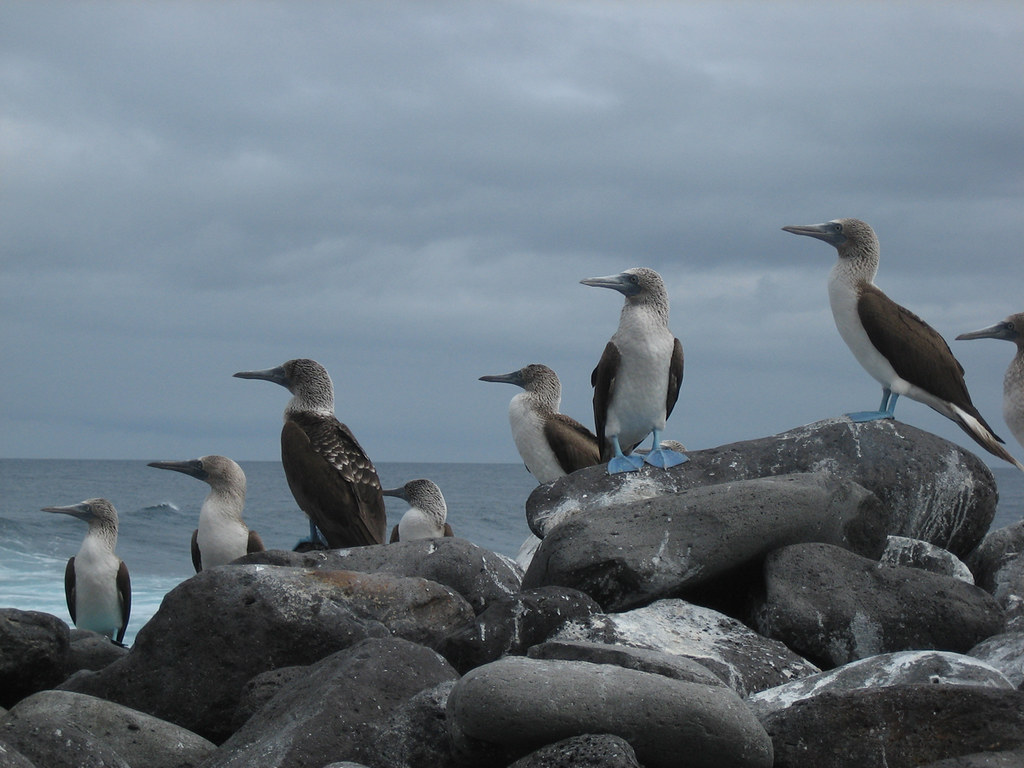 …And the coolest thing about the animals, is that it was nesting season, and they have no fear of humans so we could get really close. 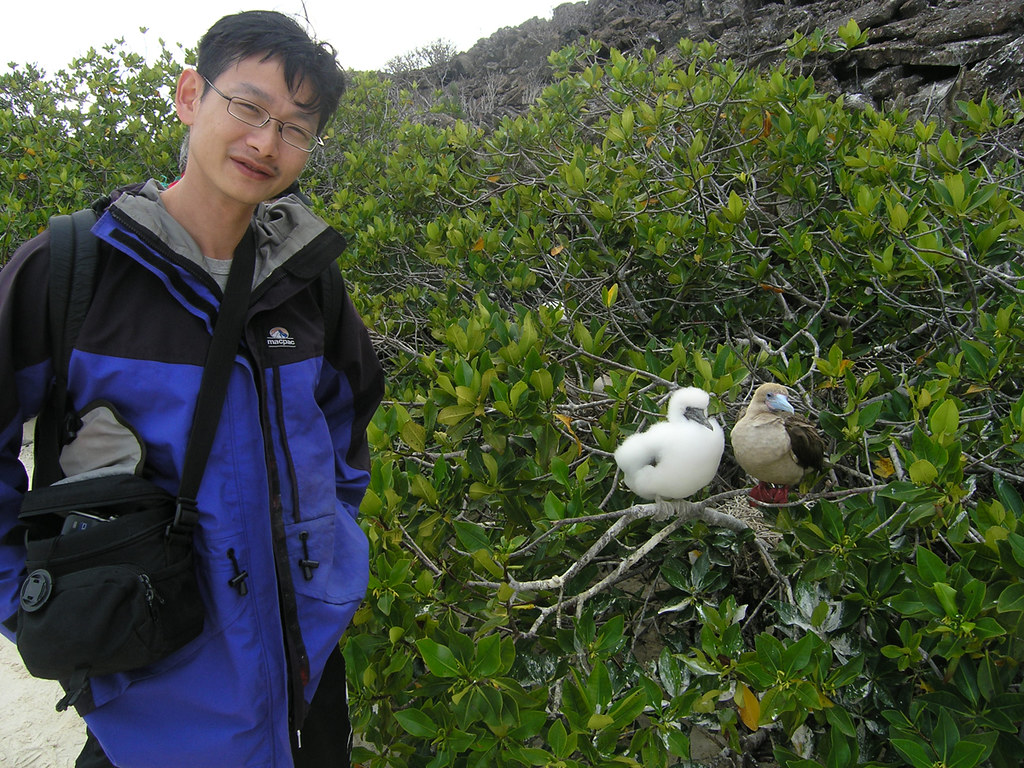 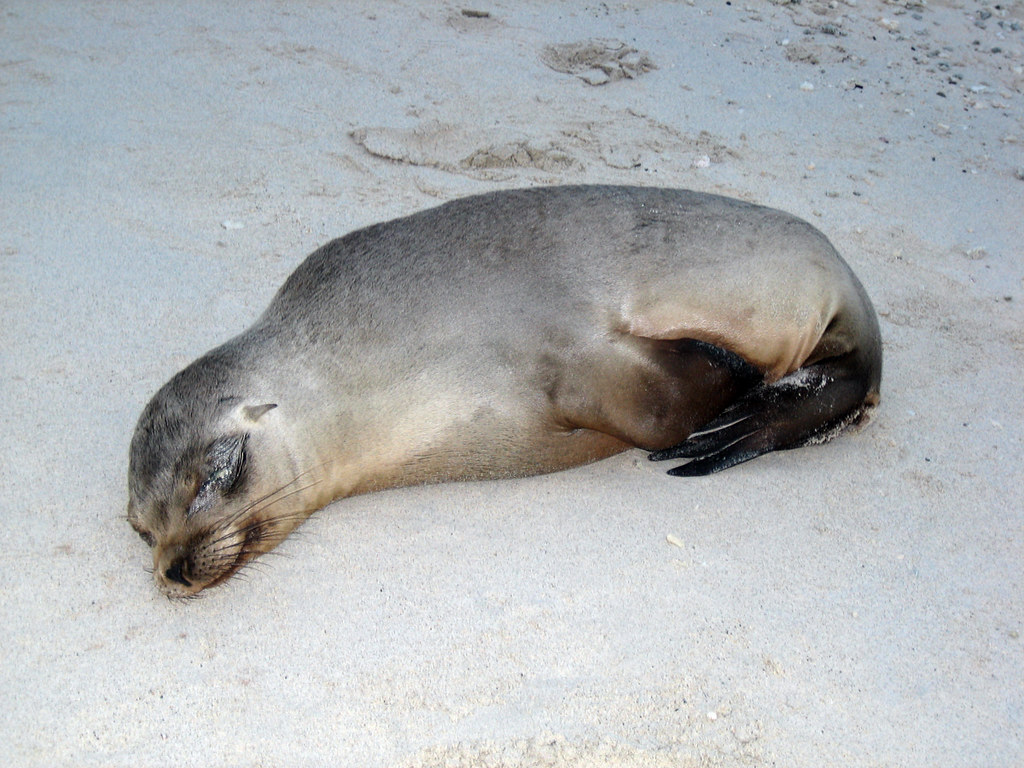 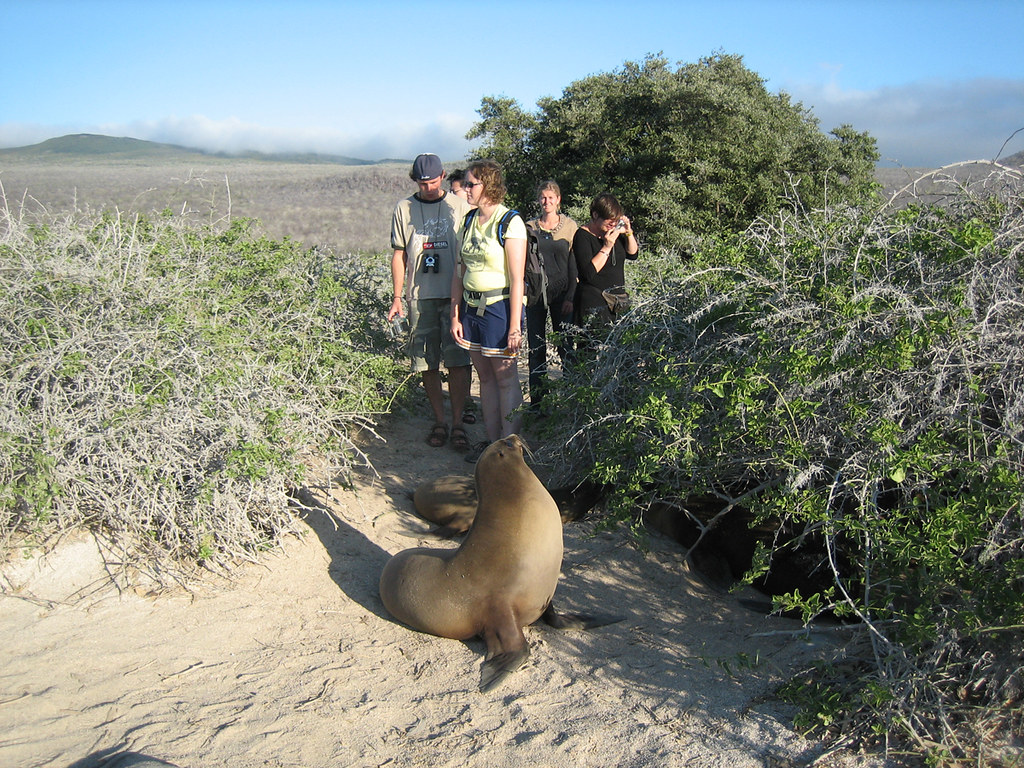 Cute fluffy chicks and baby sea lions that wanted to nibble our toes and big floppy iguanas just covered the beaches and we had to actually watch not to walk on them as they just didn’t care that we were there. Even cooler is that we literally spent days just snorkelling with big sea turtles and with sea lion pups that just wanted to play with us…. 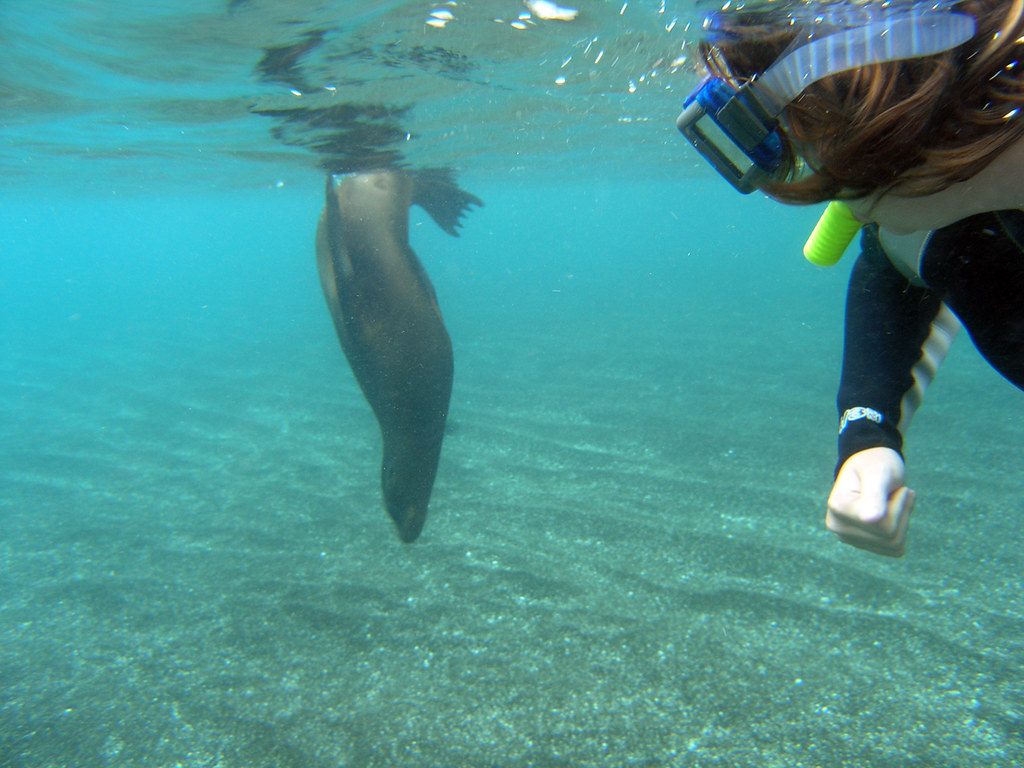 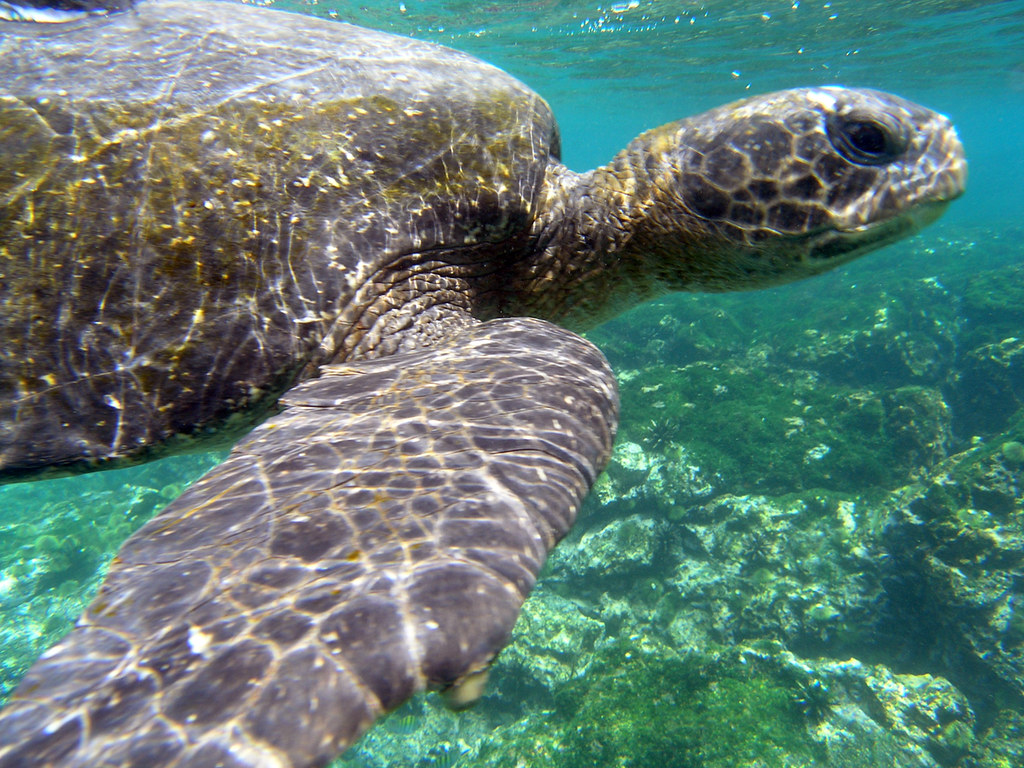 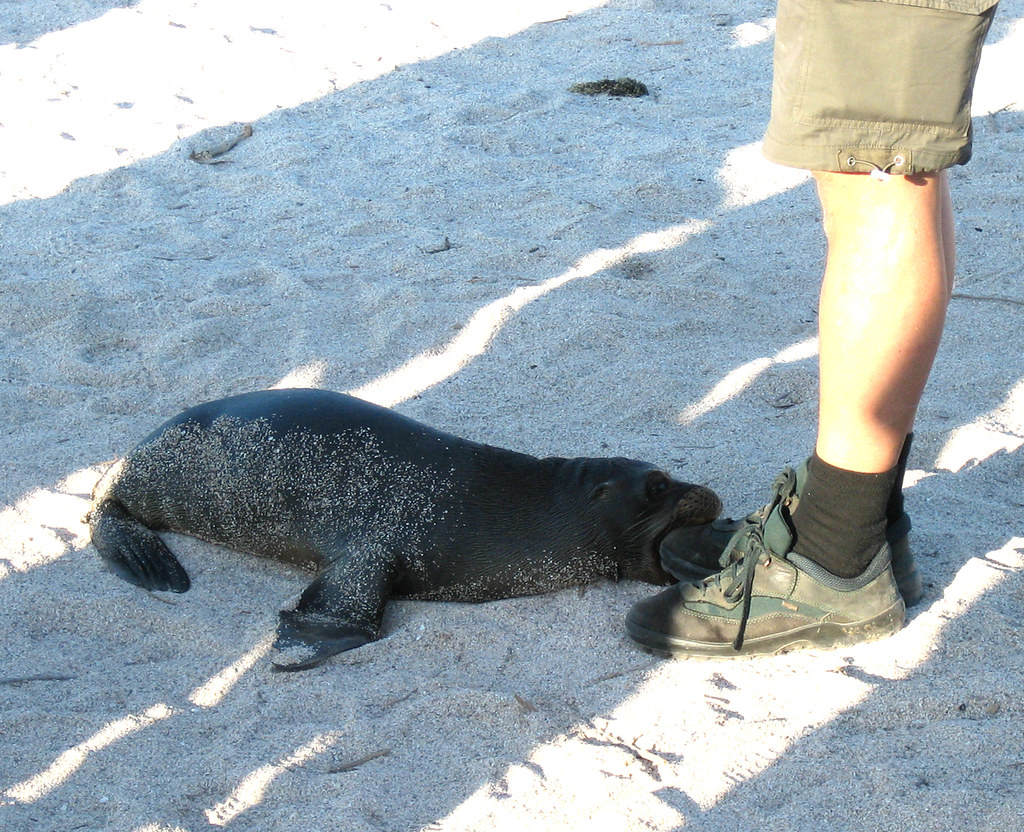 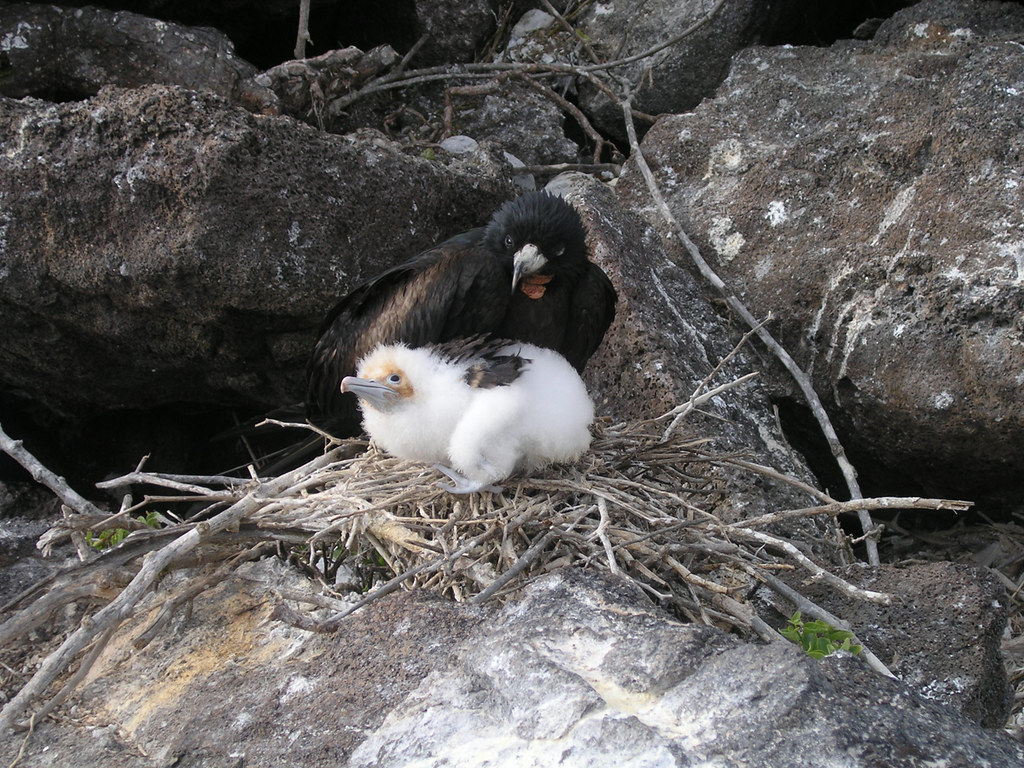 …well that is, it was really cool until one of our group got too close to a group of female sea lions and got bitten pretty badly by a massive male who was guarding the territory… ouch…she had a 2cm deep hole in her bum even through the wetsuit… 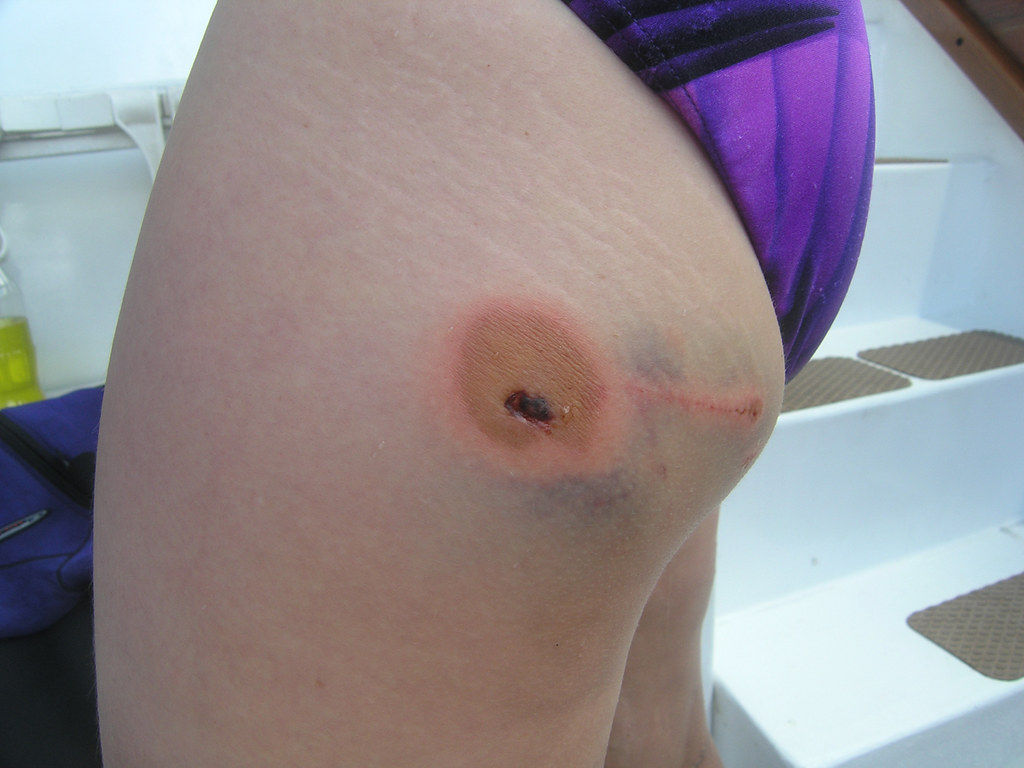 The freakiest day however, was the day that our guide decided that we should look for hammerhead sharks to swim with.

…Now not having seen hammerheads before and thinking that they were just funny looking small sharks, I was pretty keen, until one of our crew yelled “shark” and I looked below me and I shit you not there was a 4m hammerhead shark about 2m under my flippers… I totally shat myself… it was fucking HUGE!!!!

…anyways, I have totally been scared before and had all the usual fright-flight-fight responses like thumping heart beat, dry mouth, irritable bowel etc… but I can honestly say this was the first time ever that I have physically felt my scrotum totally shrivel up with fear!!! No shit… It could have been the cold water, but I really think it was the fact that a HUGE-arsed SHARK with HUGE-arsed teeth was right underneath me…

…needless to say, I was out of the water soon after that… But I think we were lucky to see hammerheads as the captain of the boat was out with us that day and he saw 4 of them swimming around us and he was raving about them so it must have been an unusual occurrence… but sadly my photo of the shark is just a blur… bummer… 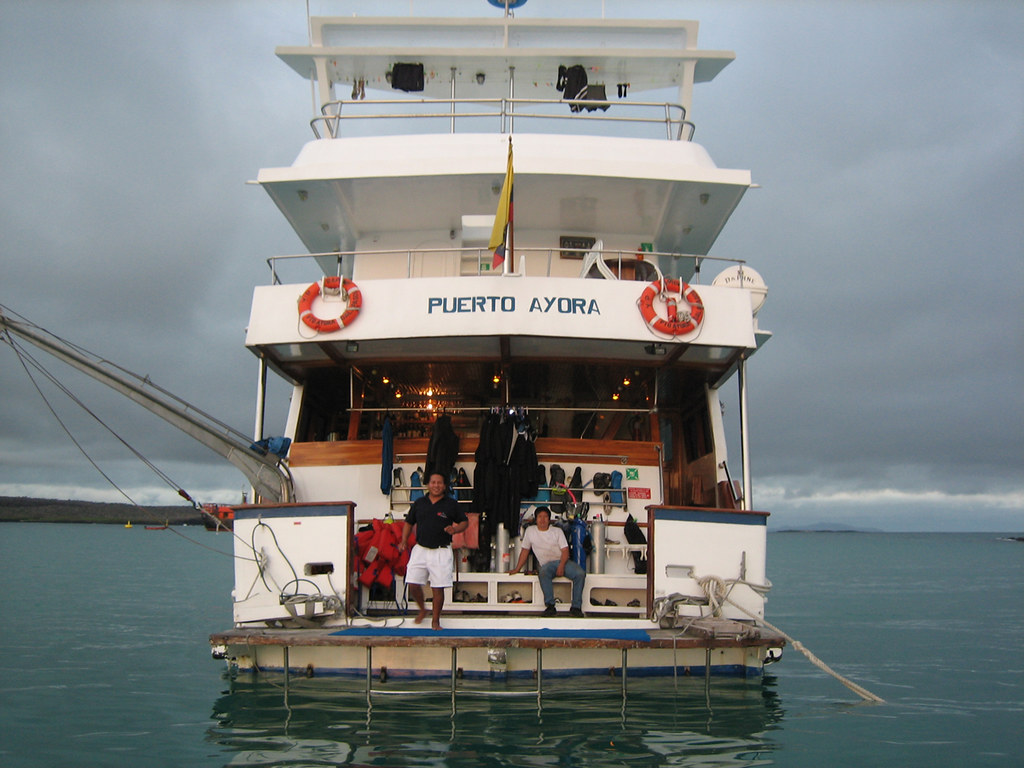 Anyhows, the Galapagos was awesome, but we are now back into Quito again and will probably bum around for the next few days while we get the balls and ovaries to head off to Colombia.

Quito’s changed a bit since we were last here 7 years ago, as it is now a bit party town. But it’s cool to be back. We`ll probably also head down and catch a cool train ride from Riobamba which we missed out on last time.

Colombia is still scaring the bejeebers out of us and we really were still questioning whether we should go right up until we bought the ticket yesterday, especially since there seems to be some increased FARC guerilla activity in the south.

However, we think we can easily avoid the danger spots so hopefully we’ll be holding onto our bejeebers for a little bit longer. And as an added consolation, everyone (including the guide books) keeps telling us that Colombian women from Medellin are the most beautiful chicas in the world.

So if we do get kidnapped and the press want to know what we were doing in Colombia, you can tell them we were there to check out las chicas bonitas…

In anycase, we’ll be heading there on Tuesday, and we’ll keep you updated.

Gotta go as the altitude is giving us headaches.

Our most recent Galapagos pics are here at this link.

PS. Thanks to Kim & Damien for all the Galapagos tips. These guys have done a more amazing and adventurous trip than us in South America and have awesomely cool photos and weblog at this link

PPS. The awesome underwater shots and vids were taken with my Olympus digital for which I bought a really cool underwater case… the bad point is that I forgot to seal it properly on the last day so my camera flooded and is now dead… FUCK!!!!!!

PPPS. Trip Stats for anyone who is interested. We went with the Daphne. Awesome crew and great boat. Cost $USD1240 per person not including flight to the Galapagos worth $USD353. 8 Days and 7 nights. Seas really rough so you need seasick tabs. Water temp 15-19 Celcius. Guide Roberto was great. Islands covered in order: Islas del Lobos, Genovasa, Santiago/James, Bartolome, Plazas, Santa Cruz, Floreanna, Espanola.