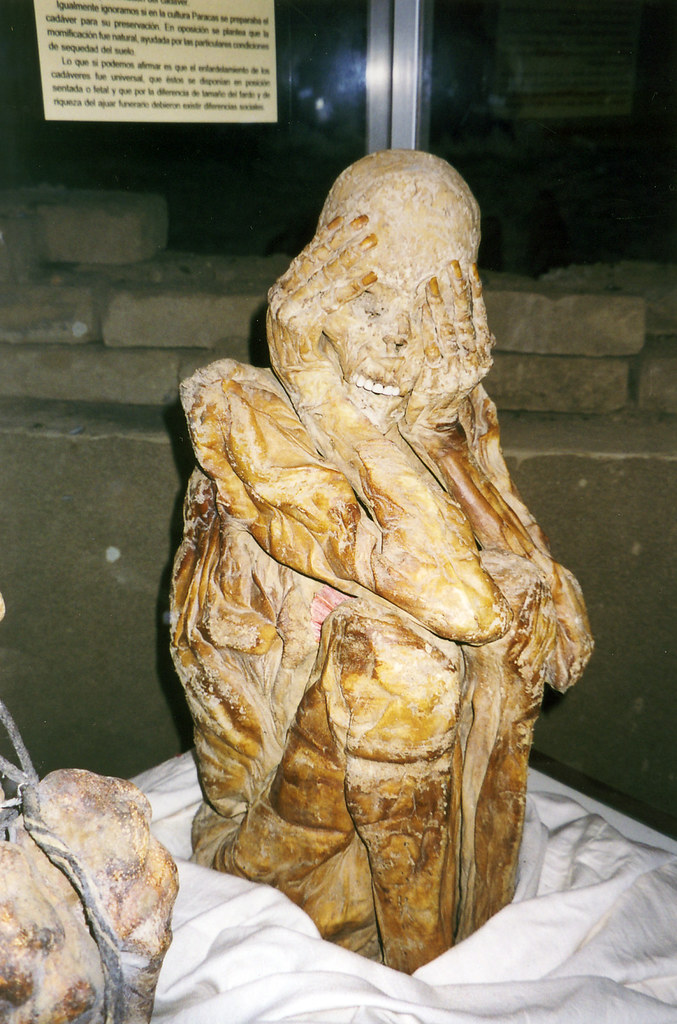 Well we left Cusco with a bad taste in our bottoms…

I had the guinea pig for dinner and yes it tastes like chicken although they could have given me a roasted rat and I wouldn’t have known the difference… It looked the same as a rat and was served whole with heart, intestines etc hanging out!!! …and yes there was a horrible expression on its face! 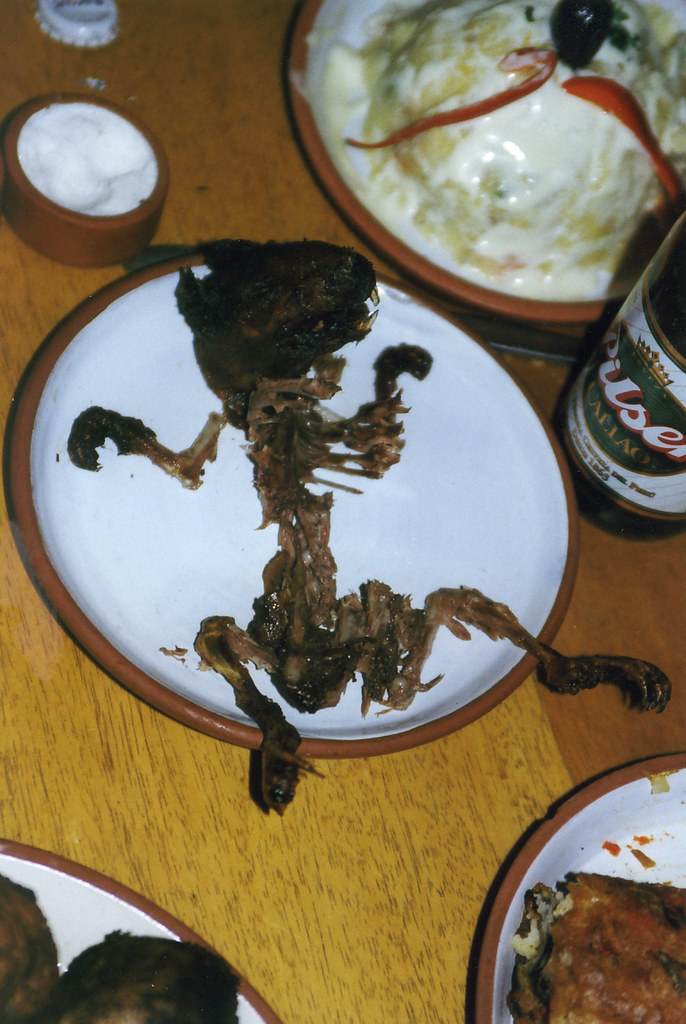 Anyway, I got diarrhea big time… (wasn’t sure if it was the jalapenos but we’ll blame the guinea pig for anecdotal sake). Pooed my pants for the first time since I was a kid, so I was very impressed. They say that your sense of smell is the most powerful way to trigger your memory, but a warm gooshy feeling does the trick just as well!!!

For those of you in the know… that explains why Avril did Operation Shit-Scared and not me.

Anyway after Cusco we went to Arequipa in southern Peru. Around Arepquipa is the Colca Canyon which is supposed to be the deepest Canyon in the world, but really it wasn’t that impressive… however, there are very big condors there which are as big as a very big thing that looks very big!!! And when they fly less than 5m over your head… it literally sounds like a plane cruising over the top of you! Very impressive! 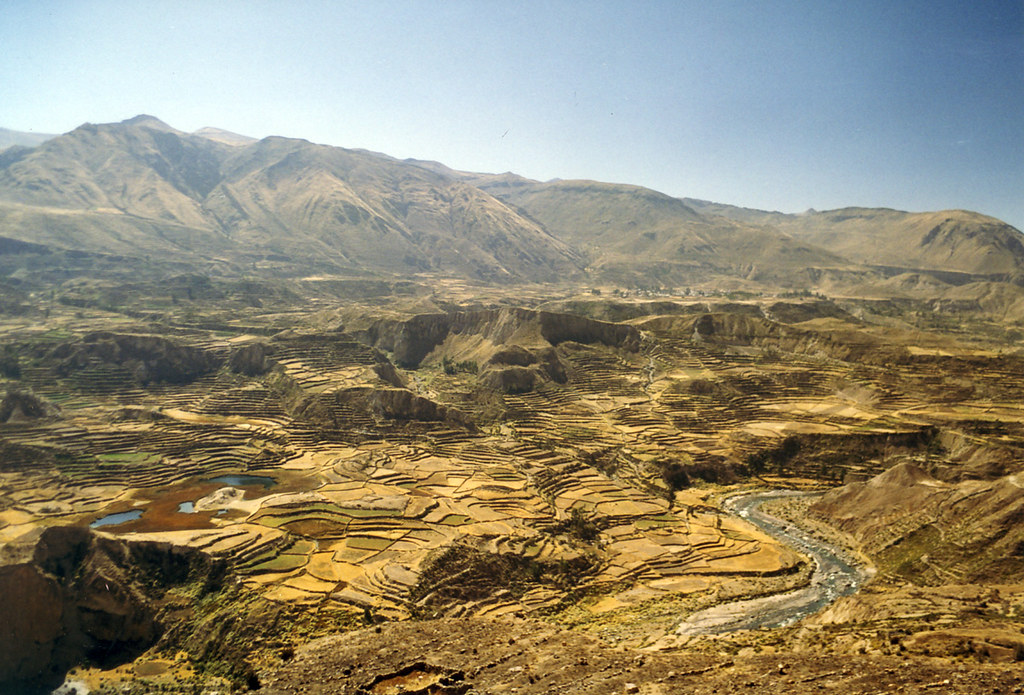 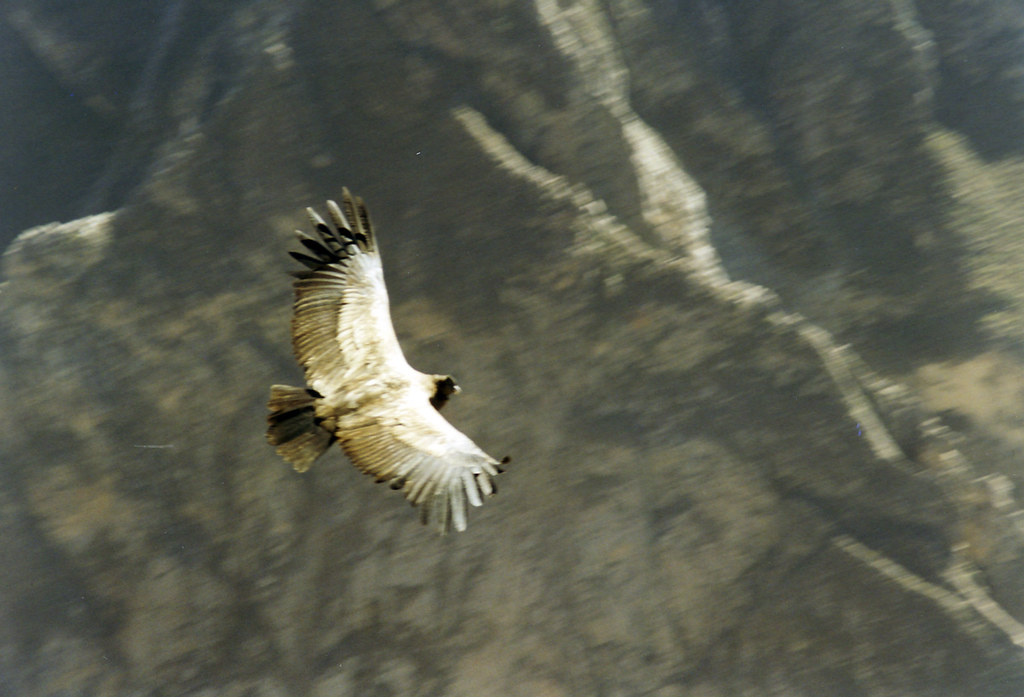 Also from Arequipa we went to Toro Muerto a field of huge rocks over 3km which are covered in over 2000 petroglyph drawings up to 3000 years old. It was very very impressive as several generations of people over 1000 years had added to the drawing. So walking along the line of rocks was like stepping back into several different time periods. It was also way cool and very surreal since the desert was very spooky and looked exactly like Tatooine on Star Wars just before Luke met Obi-wan Kenobi. We were definitely on another planet here. 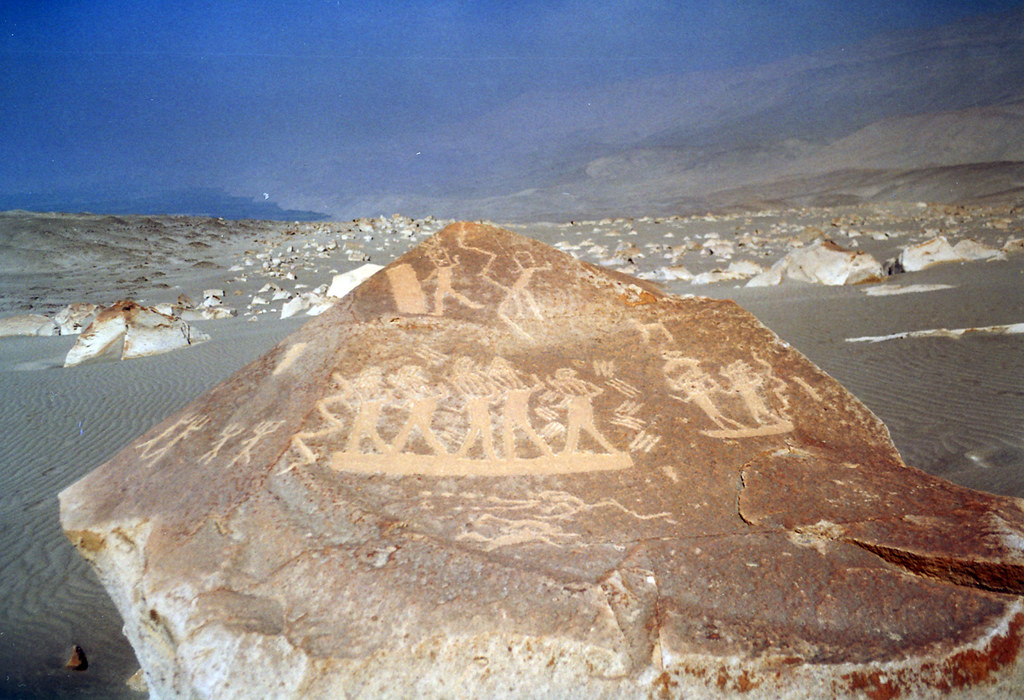 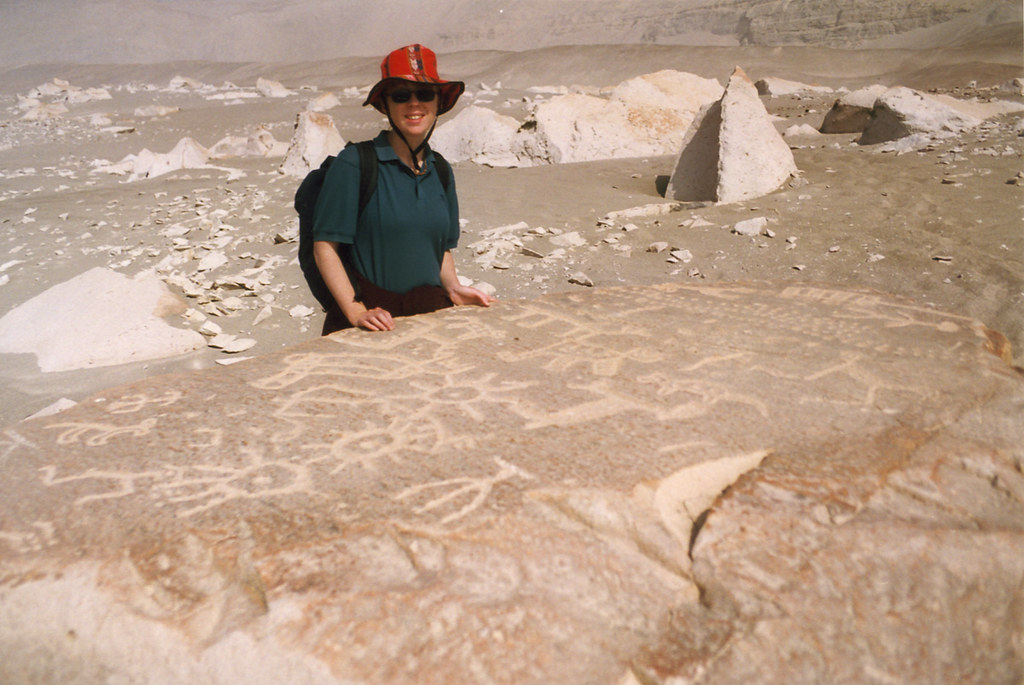 We were actually in search of a painting that we saw in a museum that honestly looks like a man getting out of a spaceship… Unfortunately, we didn’t see it and we didn’t see any UFOs either even though we started calling ourselves Scully and Mulder for the day.

If anyone is interested in going there, it’s a bit out of the way but we left trip notes in the guest book at La Reyna hostal in Arequipa… a very good hostal by the way.

The other way cool thing was that we visited Juanita, an Inca girl who was found sacrificed on top of a mountain perfectly preserved in ice from 500 years ago and who is on display in the local university… it was very haunting looking into her frozen little face.

After Arequipa we went to the Nazca desert in the south of Peru where the 3000 year old mysterious lines and pictures in the desert are.

This was the one place that I had wanted to get to in our travels as I remember being interested in UFOs and seeing these lines in books as a child. Also growing up in the 80’s with TV shows like Project Bluebook and In Search Of… Man… UFO and ancient alien visitor stories give me a woody!

We took a flight over the lines and it was absolutely spectacular. Probably one of the most amazing things I have ever seen!!! And now that we’ve seen them we can honestly say that they definitely look like ancient runways and those dudes MUST have been able to fly. However, we were in serious Shirley Maclaine country here… and we still didn’t see any UFOs…bummer!!!

The lines are definitely not visible from ground level and the road runs right over them. But as soon as you are in the sky it is evident that they were meant to be seen by someone who was flying. There is even a mountain with a several hundred metre tall spaceman waving. If you come down here you will end up believing in UFOs!!! 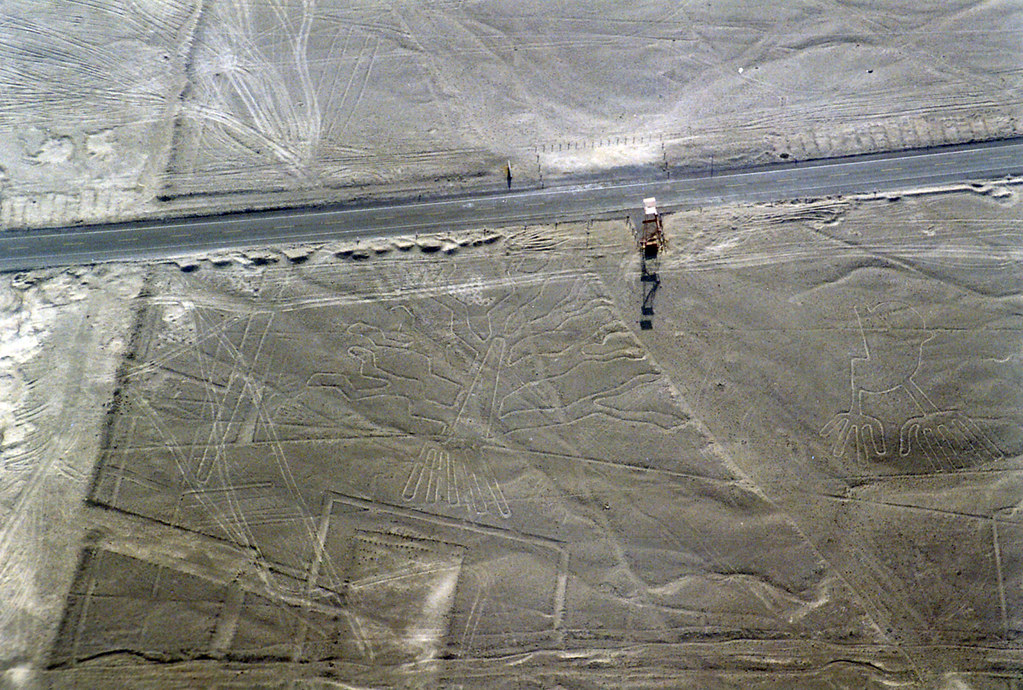 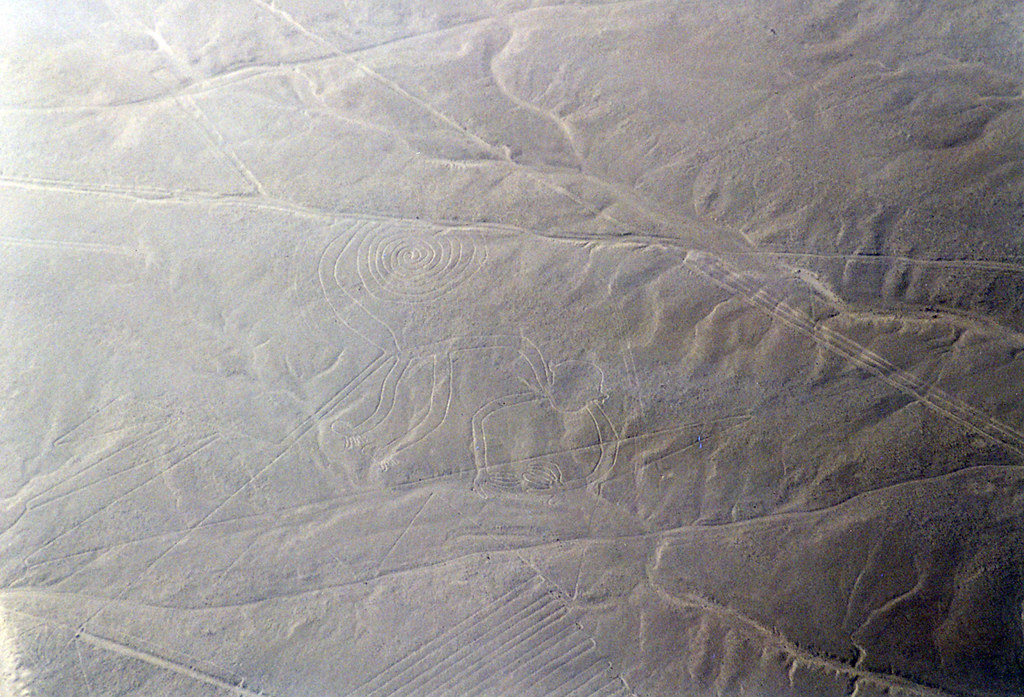 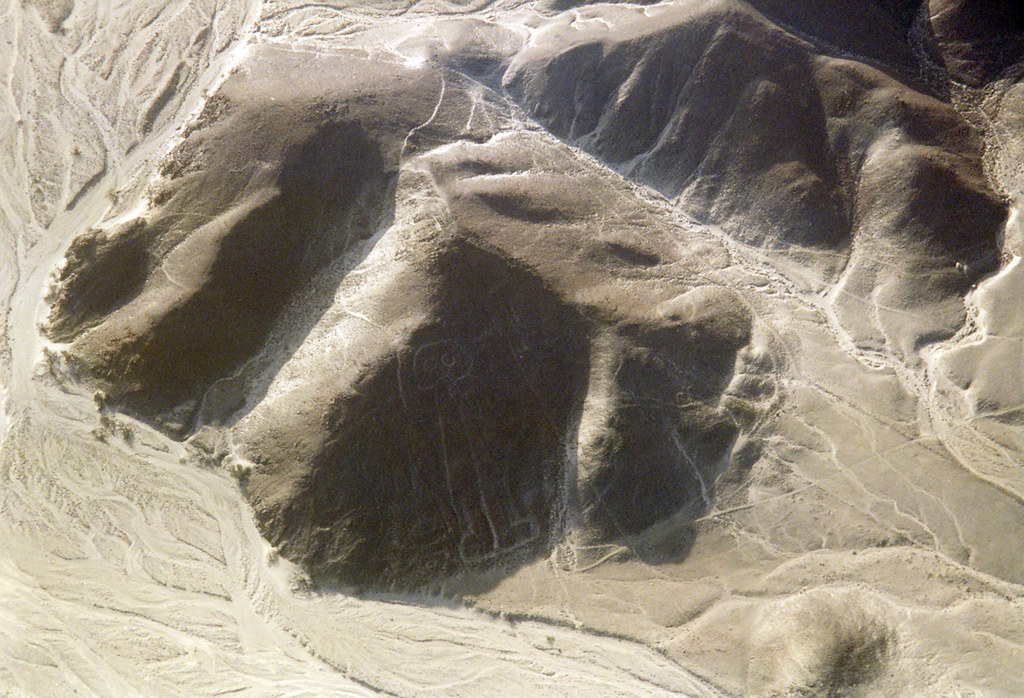 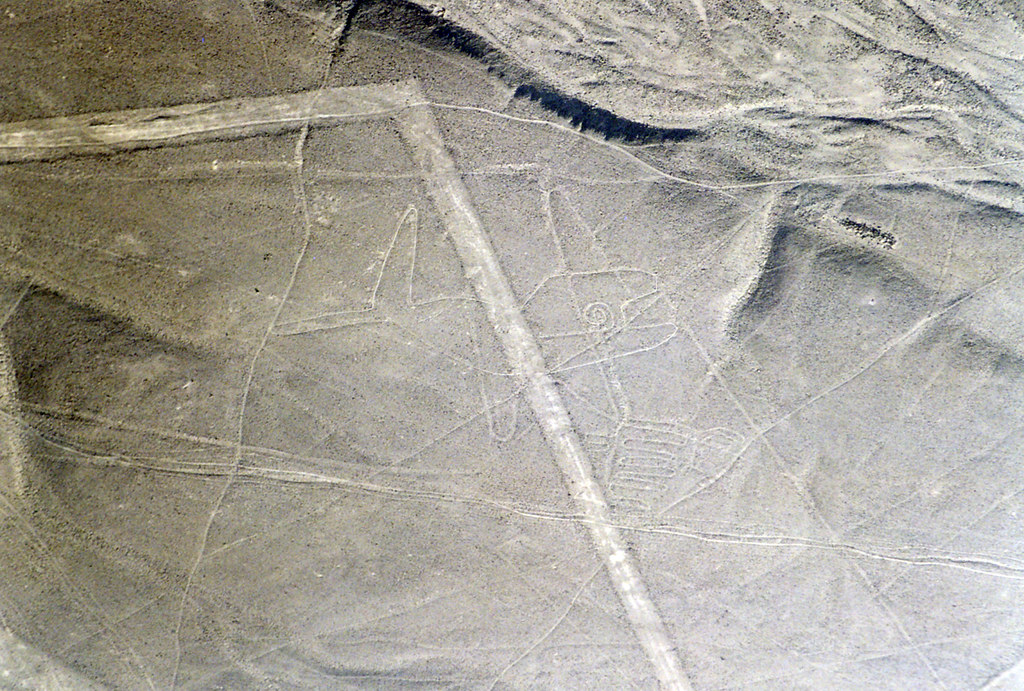 So anyhows, here is a joke interlude… What do you do when you see a space man???

Oh and a tip for travellers… Nazca is rort city. Don’t go with any touts that meet you at the bus. It’s a scam… they say that they’re from different hotels but they all work for the same hotel which has dodgy flights. Hostal Alegria is a cool place and their flights were $US40 and it was just the two of us in the plane plus the guide and pilot.

We also were eating lunch and the owner of the restaurant started yelling at us which we thought was bizarre until we realised she was yelling at a small child who had crawled under our seat and was going through our day pack completely without us realising it. Sneaky little shits!

In Nazca also was a cool open cemetery about 2500 years old where you literally walk along the little paths amongst heaps of bones in the desert. It’s amazing as you can literally bend down and pick up a wad of human hair or pelvic bone or vertebrae and it’s spooky when you realise that it’s somebody’s body part from 2000 years ago. There were also pits in the ground where the skeletons sit in fetal position full clothed and stare up at you. Too bizarre!! 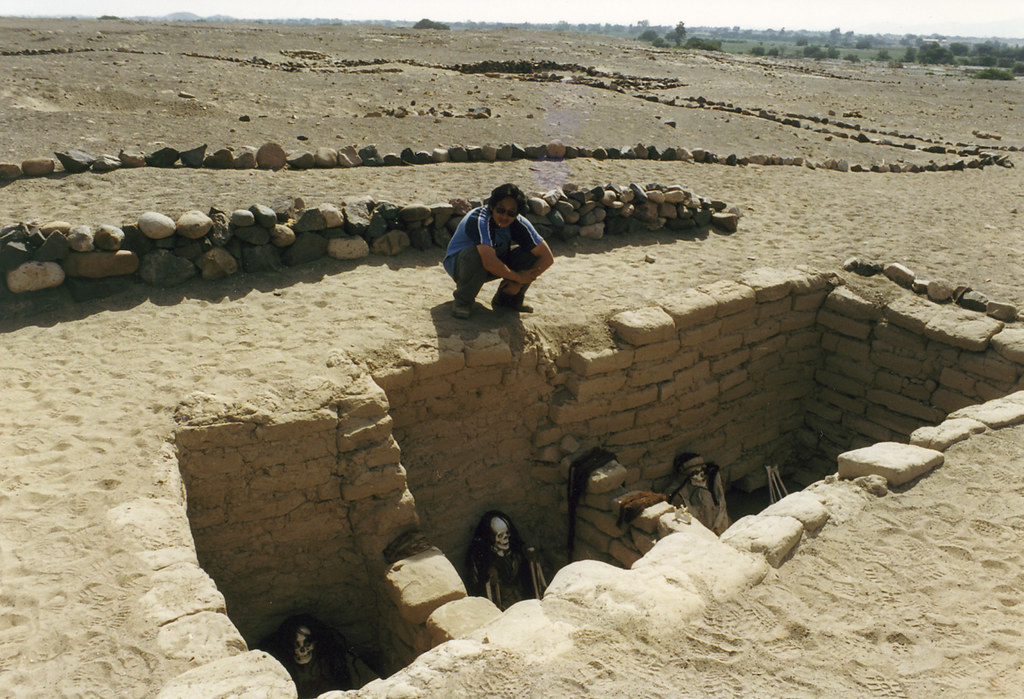 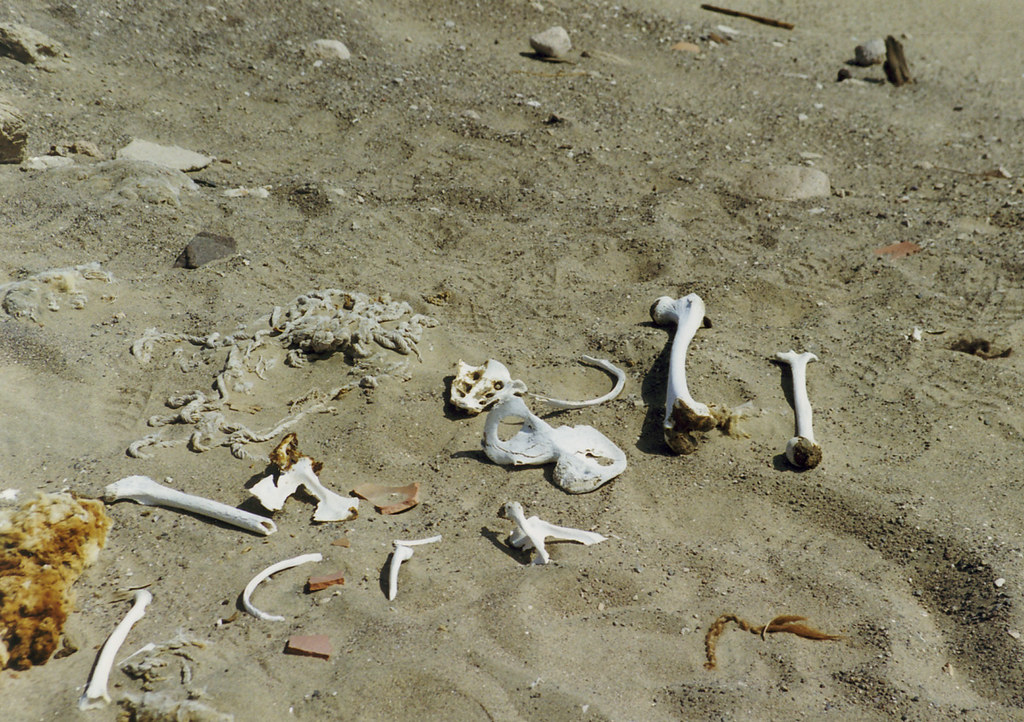 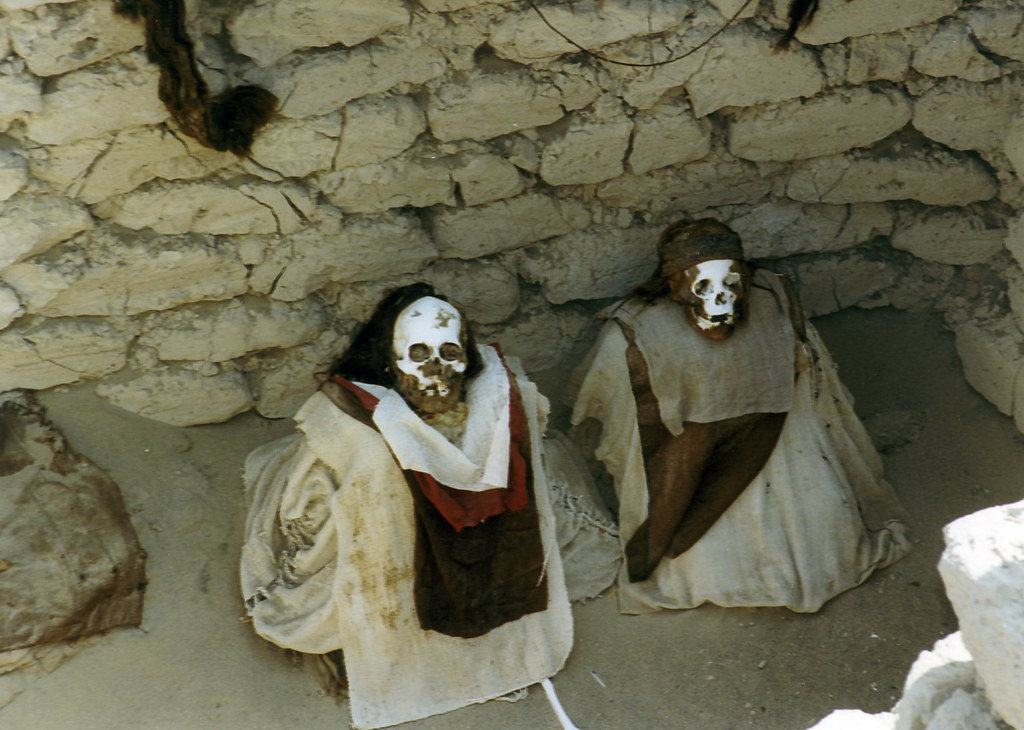 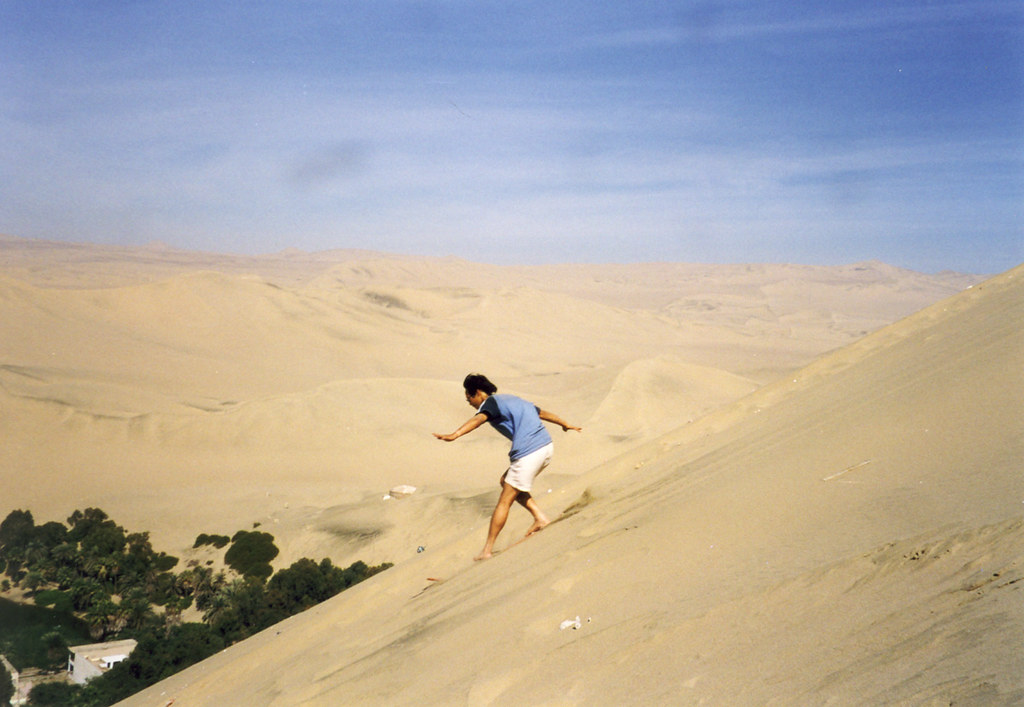 There’s nothing better than contributing to erosion on a sand dune by using your face to plough away the sand!!! We are still pulling sand from cracks in our body we didn’t know we had.

Ica the nearby town had a really cool museum with heaps of dead people with horrified looks of sacrifice on their faces and also a cool medical archaeology section with x-rays and bones and pot specimens showing all the ancient diseases that were about. 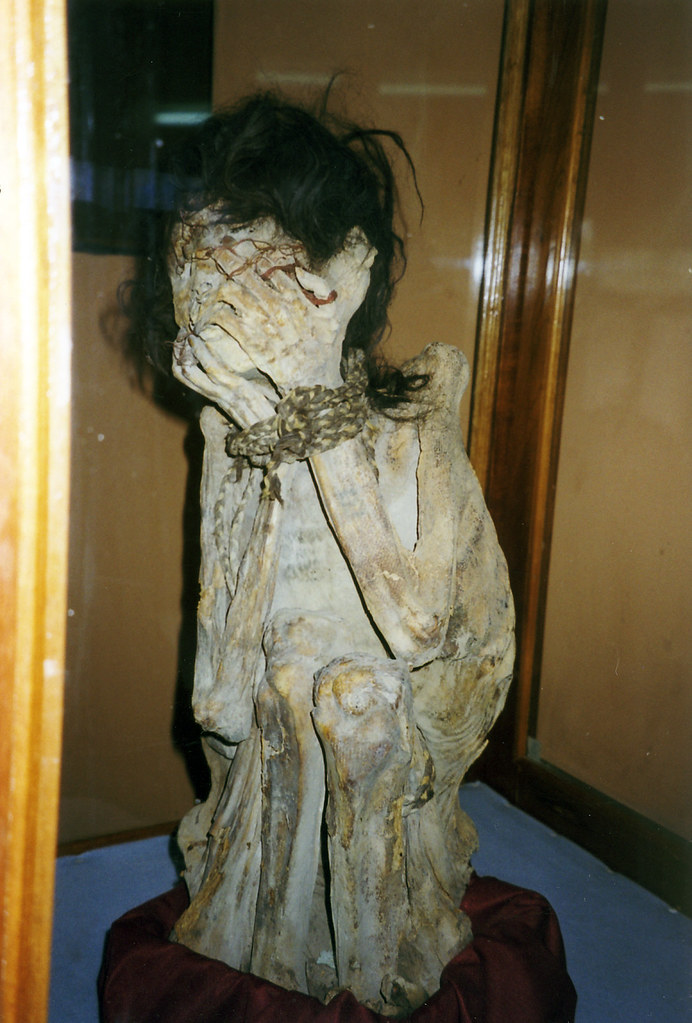 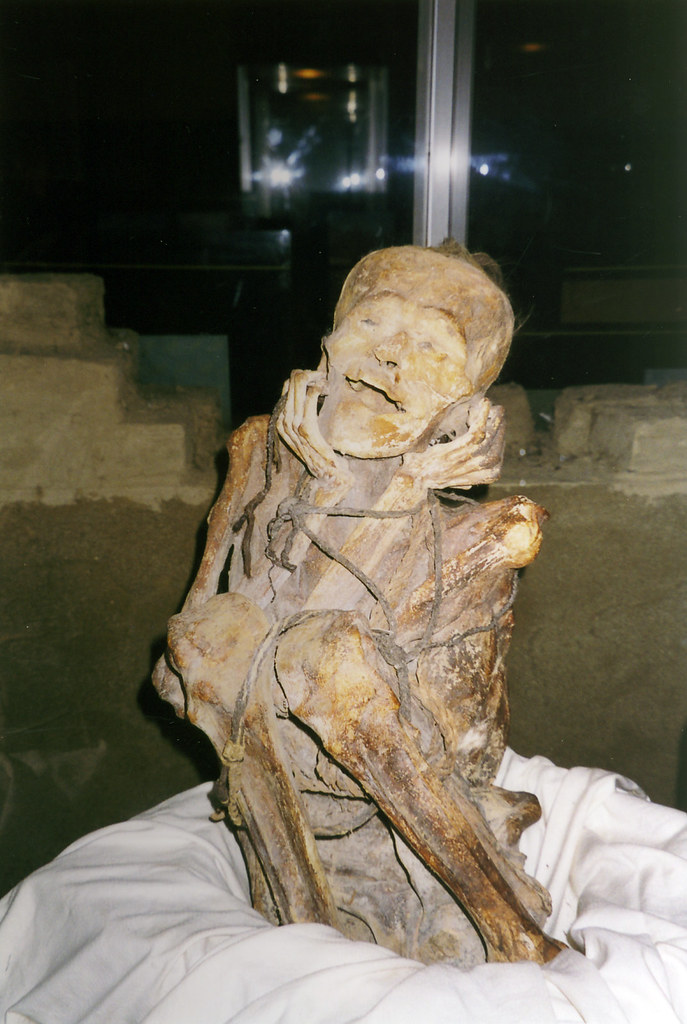 A lot of people died from osteomyelitis (bone infections) caused by dental caries and tuberculosis. There were heaps of osteoarthritis and spondyloarthritis but in people aged about 30 years old!!!

Not only that but the ancient Peruvians were masters of deforming their skulls. Holy smokes it would freak me out to see dudes walking around like this today. 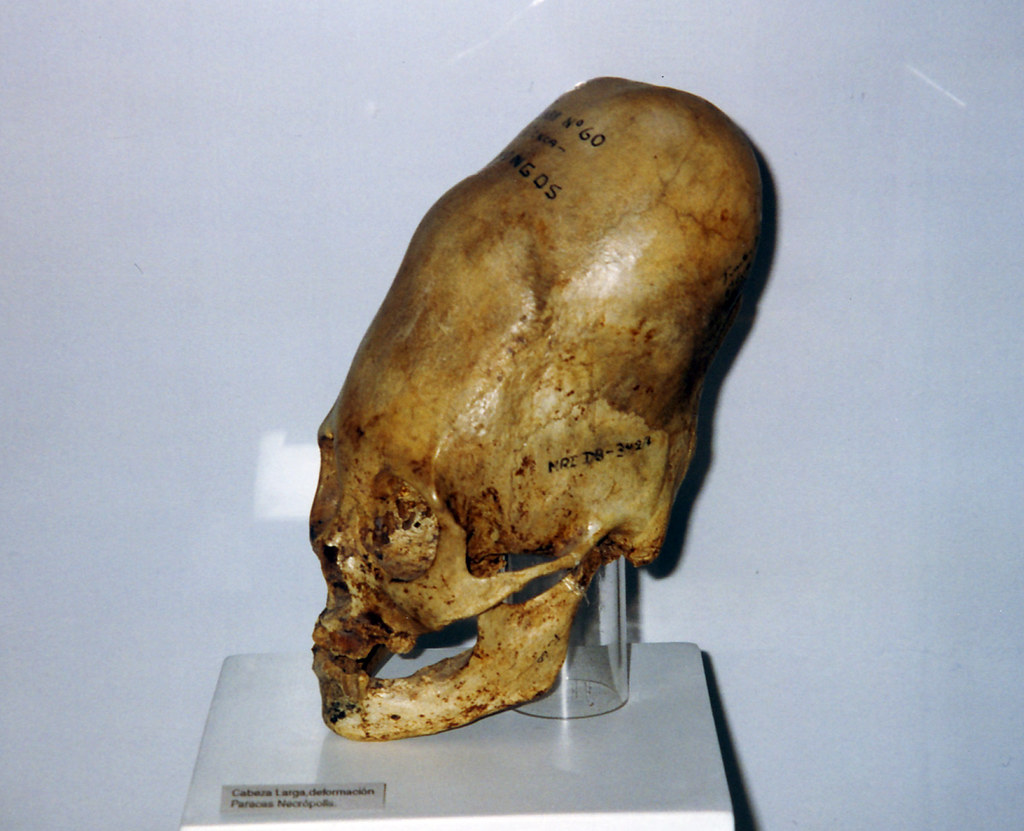 Also on a medical note for the docs out there… now that we’ve been travelling in altitude, we’ve noticed that if you prescribe acetazolamide/diamox for altitude problems, a universal side effect appears to be paraesthesia of the extremities which can be profound enough to reach the elbows… totally weird and reversible but if you want a good laugh at your patient’s expense… tell them the cure is to pat their head and rub their stomach at the same time as a paraesthesia attack… it’s very funny to watch!

Well that’s my contribution to medical education…. now can I claim this whole holiday on tax????

Well, we then finally arrived in Lima the capital of Peru and it’s definitely the shithole everyone told us it would be. The centre of town is depressing, dirty and dangerous and the smog is the worst we’ve seen this side of Bangkok.

We opted to stay in Miraflores, the expensive part of town after hearing all the horror stories of muggings etc, but it was so expensive that we just saw a few museums and left. If anyone’s interested we stayed at Hostal Atahualpa (in handbook) and its US$10pp, but it’s got a great kitchen.

After a brief stop over in Huaraz the trekking mecca of Peru, which was some of the most spectacular Andean mountains that we’ve seen, we are now in Trujillo a city in the north of Peru. 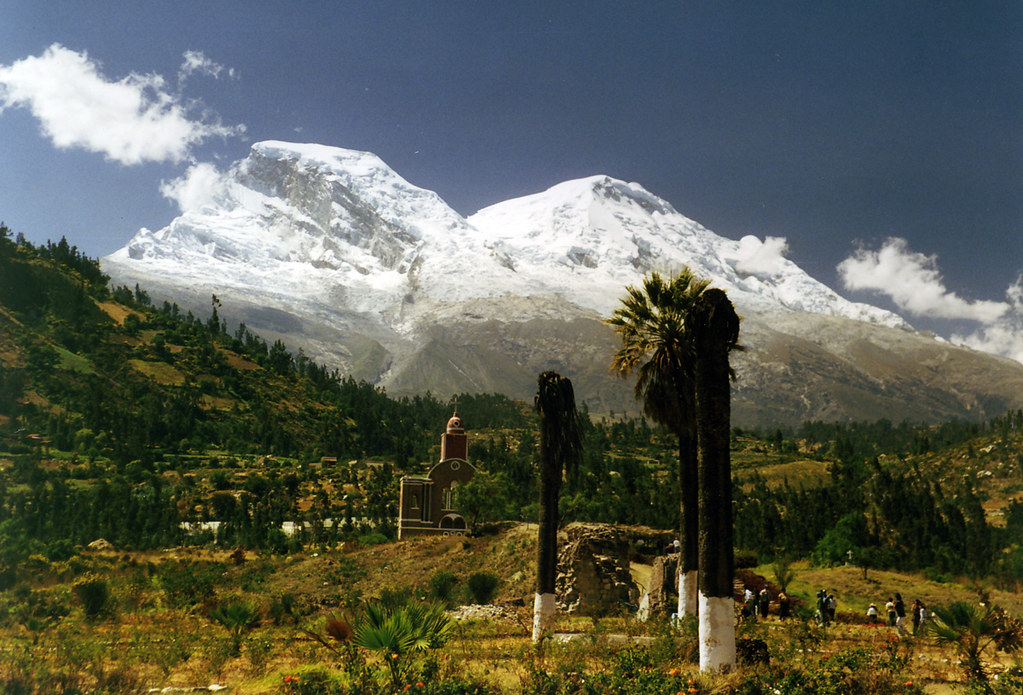 We’ll be spending about a week travelling through and seeing some of the spectacular pyramids and ruins that literally are everywhere up here.

We were lucky enough to meet an archaeology guide who pointed us in the direction of some mysterious ruins off the beaten track, so we’re planning on trying to get there.

Hopefully, we should be in Ecuador by the end of the month and then we are shooting thru to Central America.

…Oh and by the way, we’ve decided we are sick of telling the locals what our occupations are, so we’re copying friends Peter Erskine and Liz and changing our occupations… henceforth we shall no longer be known as the knights who say nee, but instead….

Pete Erskine and Liz… wow… Albania sounds amazing you guys are definitely having fun… hope Africa treats you as well.

Ruth…. Laos sounds most excellent. We’ll be in London by mid October to see Parin and Umeer and the boys… love to catch up with you… should try and get to a rave for a boogie… will let you know closer to the date

Tamsin… That’s a truly awful story about that young girl… i guess you could have used the rfmra… A farmstay in Norway in winter???? The mind boggles…

Umeer…. you dumb shit… you can’t get married cause you’re still a sleaze… will be in London by 17 nov… save us some free food!!!

Arun the Gimpemeister… hopefully visit you sometime in first two weeks of sept.. let us know where you’ll be

Patricio… went to your hotel on the day you left… ran into bob in Huaraz who fell down a cliff and who said you’d probably go back to Cusco to chase some girl… if you do, don’t lean on the door to room 101 at hostal Union otherwise you’ll be leaning on Avril’s poo

Thanks to daniel and pedra, nigel and jacqui, luci, and all the others for the tips on Peru… have been using them heaps… of course we’ll hold it against you if they’re crap