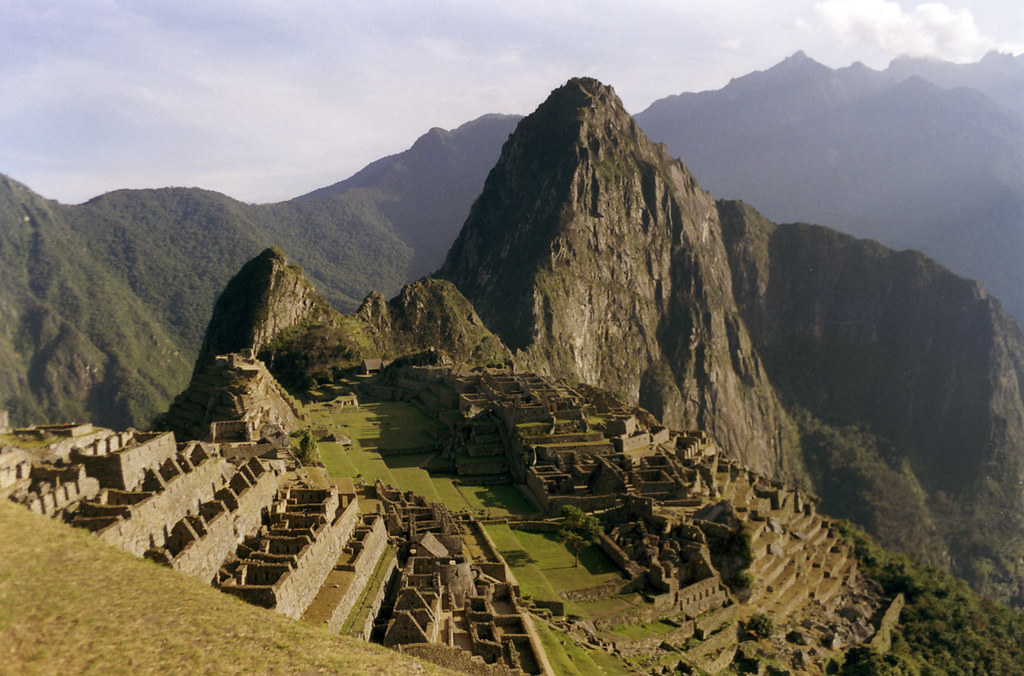 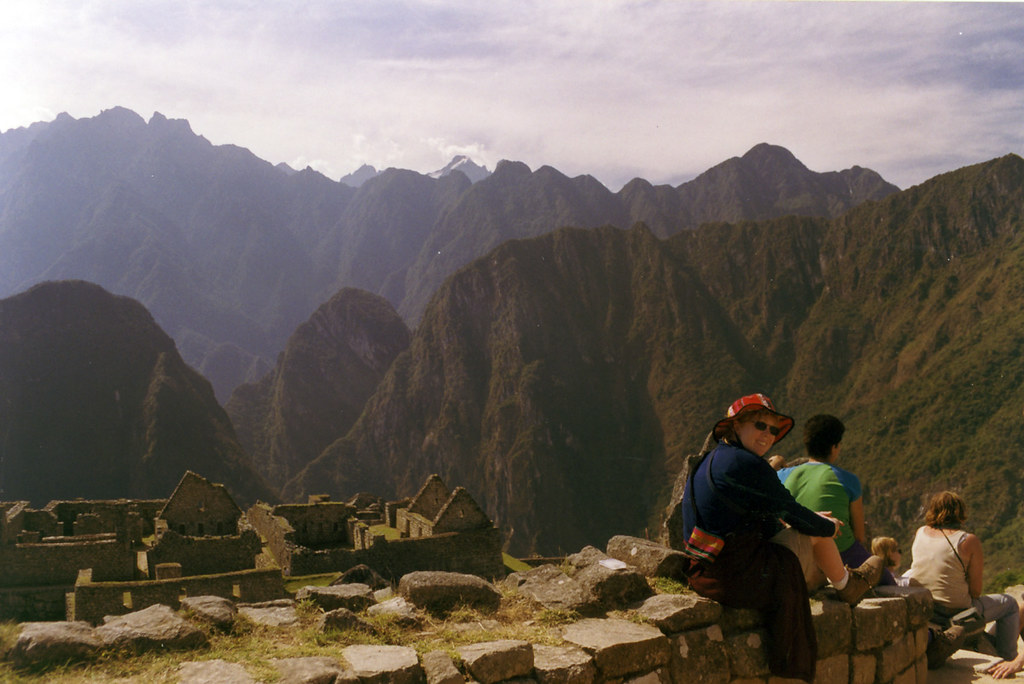 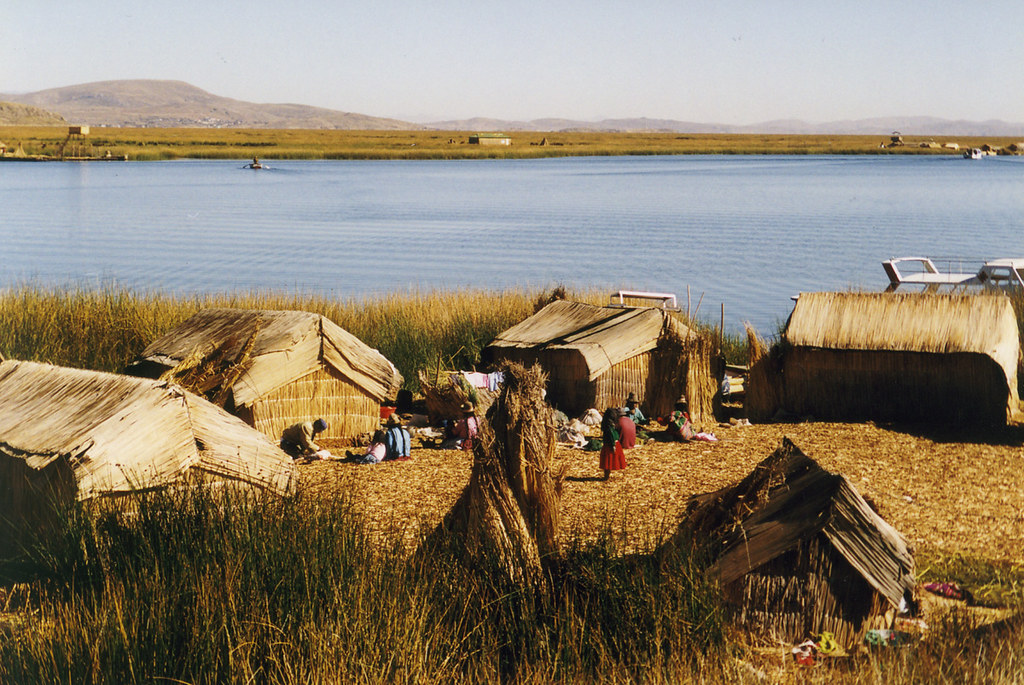 Peru is an amazing place and much more civilised and organised than Bolivia and the streets are generally cleaner and everything is nice and happy…. so far anyway!

The only drawback so far is that even though they are a much richer country than Bolivia, and even though they obviously spent heaps of money on nice bathrooms… for some stupid reason they don’t believe in toilet seats and there is nothing worse than plonking your bum on a cold altitude chilled toilet rim!! We’re actually considering buying a toilet seat and strapping it to the outside of our backpack… with the wok of course!

Ok now that that is out of my system here’s what we’ve been up to….

We crossed into Peru via Copacobana (where music and fashion were always the passion) …which is a small resort village on Lake Titicaca.

The lake itself is huge about 350km across and all at about 3600m in altitude. It’s surrounded by fantastic Inca terraced hills and is dwarfed by snow-capped mountains and the waters are the most amazing blue colour…. all very tranquil… 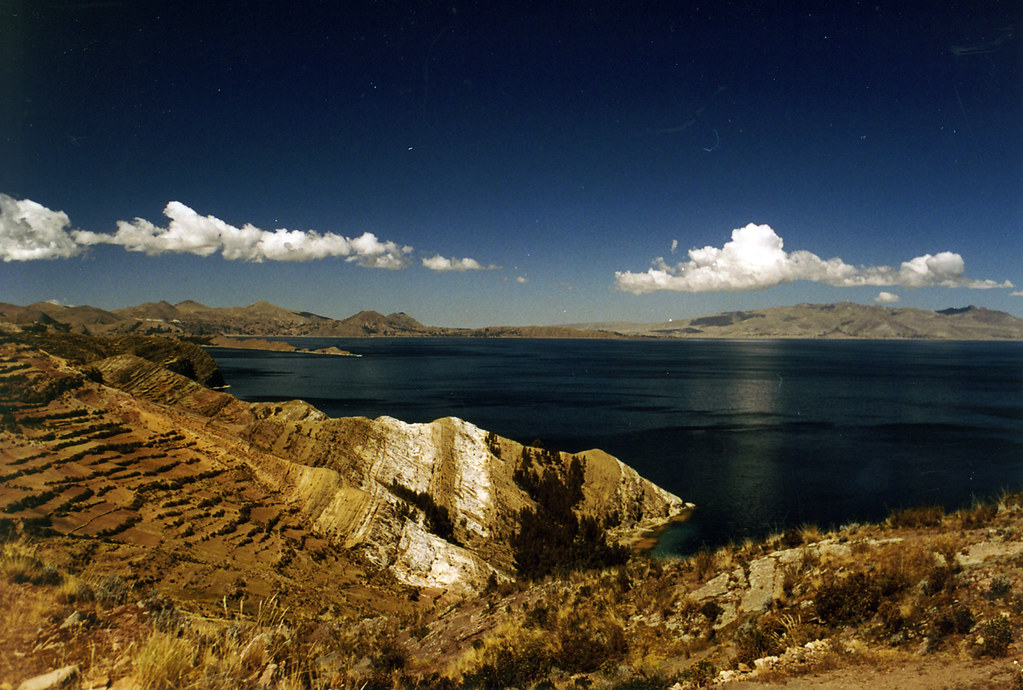 From Copacobana (where music and fashion were always the passion), we went to Isla del Sol, which is also known as the Island of the Sun, and the birthplace of many of the Inca legends…

We trekked across it for a couple of days and found it an absolutely beautiful place. There are a lot of farming communities on the island and the kids who tend the sheep and stuff often will walk with you… 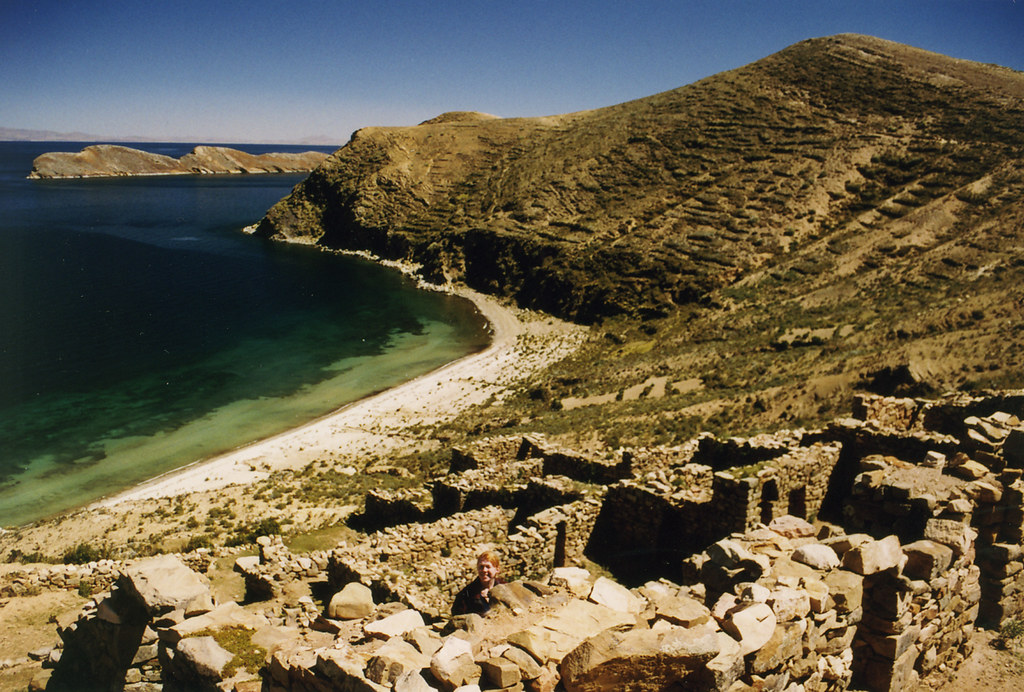 They’re cute until they start begging for money and chocolates though. At first we were all polite and shit but they soon became very pushy so I learnt to say “Si! Yo tengo mucho dinero y chocolates, pero nada para ti!!!”… Which basically means “Yes I have heaps of money and chocolate, but none for you!!!” You should see the expressions on their little grubby faces…:) Avril’s a little less discrete and just says “piss off you little shits!!!”… I knew there was a reason I liked her!

Anyway, on Isla del Sol we were travelling with another Australian DUDE who had a boom box and some cool retro music so we did the obnoxious Australian tourist thing and blasted “I’ll Tumble 4 You” by Boy George over the tranquil blue waters of Lake Titicaca… oh well we’ve been good for so long!

After that we left Bolivia forever and went to Puno in Peru which is also on Lake Titicaca… and did a great trip to the floating reed islands of the Uros people… I remember them from those old history classes in primary school. They literally live on islands made from cut reeds in the lake and some of the islands are absolutely huge with up to forty families on them… really cool. 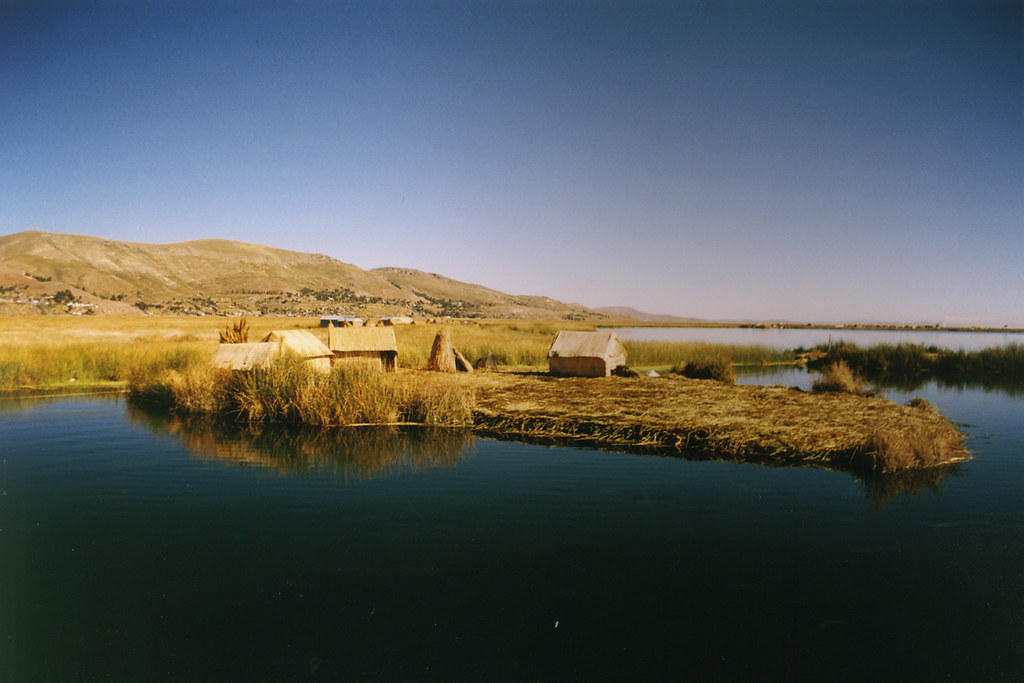 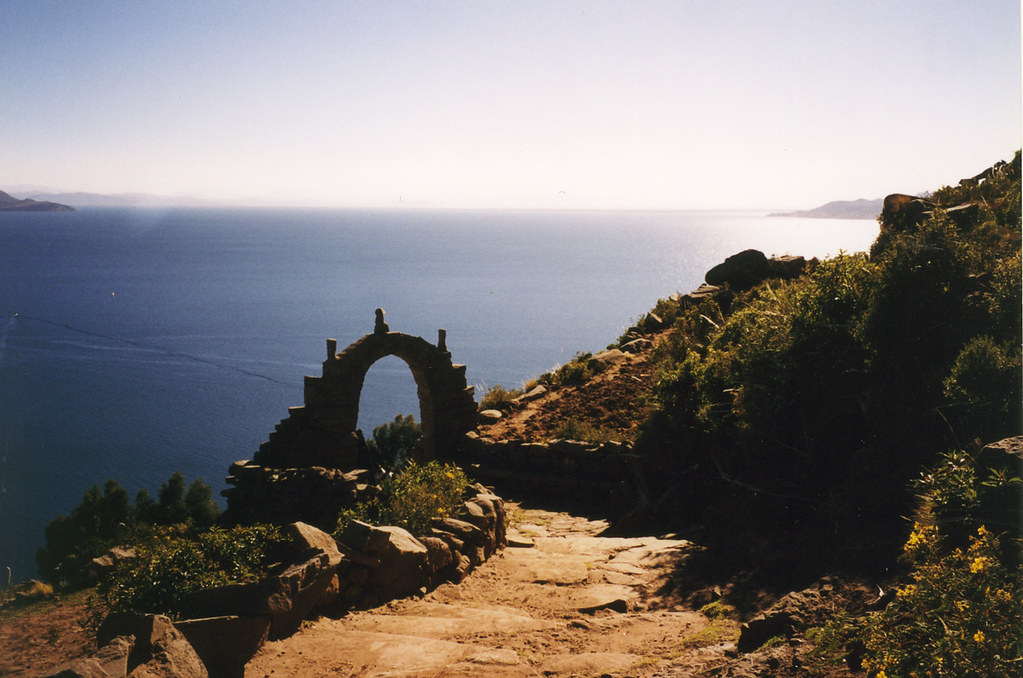 If they want to move they just tow their island somewhere else! Went with Fieser tours, which we would recommend.

We then took a decrepid train ride from Puno to Cusco which was so bumpy we were afraid of derailing… still better than the bus, and to those following, buy your ticket in advance at the train station, not at travel agents… Diana Tours really screwed us around!

Cusco is the most well known tourist town in Peru and before coming here our heads were filled with 5 months of horror stories from other travellers of muggings, and bag slashers and fake police who try and plant drugs on you if you are naive!

We were so intent on looking mean that we were considering getting tattoos on our foreheads of furry animals being gutted just to make us look scarey! Fortunately, so far we have felt very safe and Cusco is great.

The town is built on Inca ruins and you can sit in restaurants that have half their walls as old original Inca stones and half as expensive mirrored glass… a great blend. 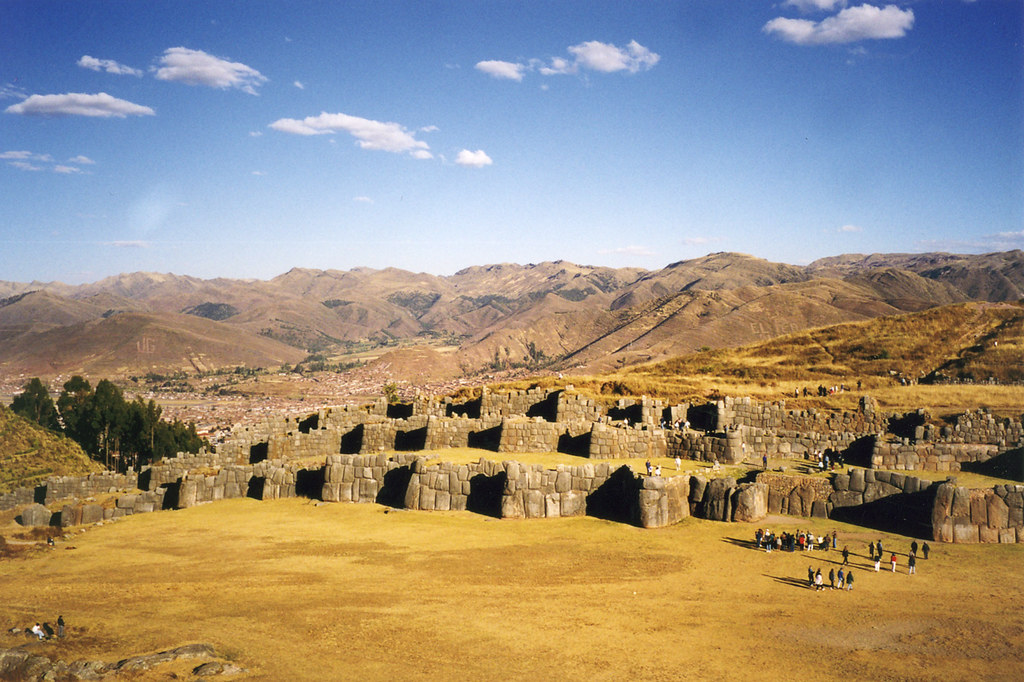 The town is surrounded by a wealth of ruins in reasonable condition and there is a great feeling of antiquity. So far we’ve walked the Inca trail, drank Inca cola, played on the Inca slippery slide, walked Inca tunnels and sat on the Inca thrones… In fact soon we’ll have Incas coming out of our butt!” We hope that soon someone discovers the Inca toilet seat!

The Inca trail was great fun too! It was 4 days of reasonable hard trekking, but we had great weather and a really good group of only 9 people (United Mice $US72 pretty good).

The second day was as hard as everyone warned us… you climb from 3200m to 4200m and then all the way down again before having to go up to another pass of the almost the same height. However it was worth it as some of the ruins along the way were just as spectacular as Machu Picchu. 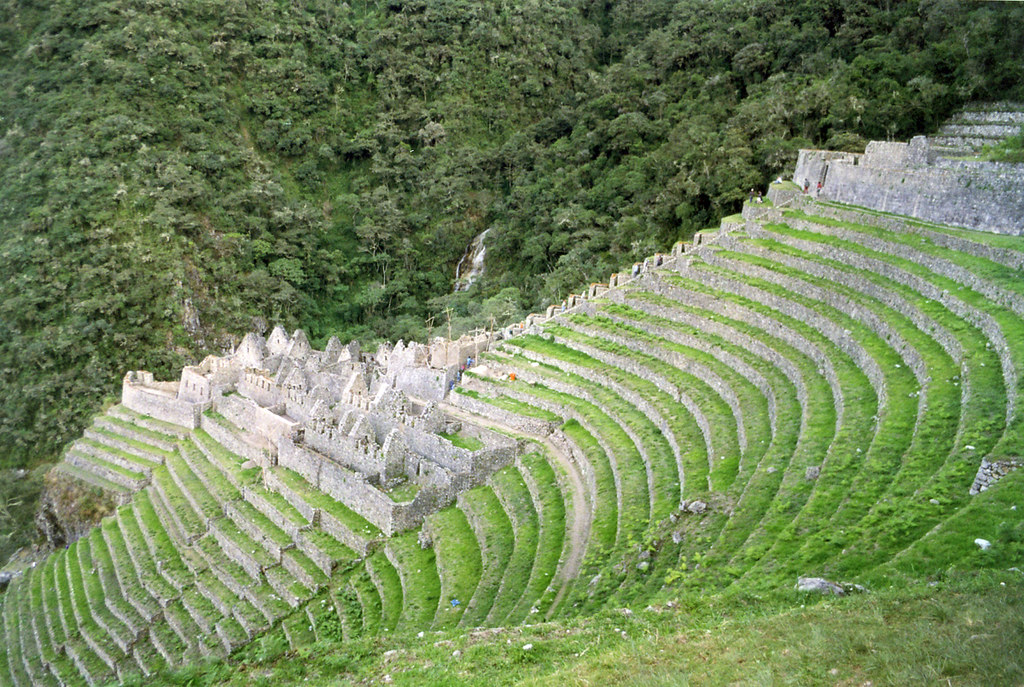 The Machu Picchu ruins were absolutely amazing and huge and the most amazing thing is that the surrounding hillsides probably still hide even more Inca cities. 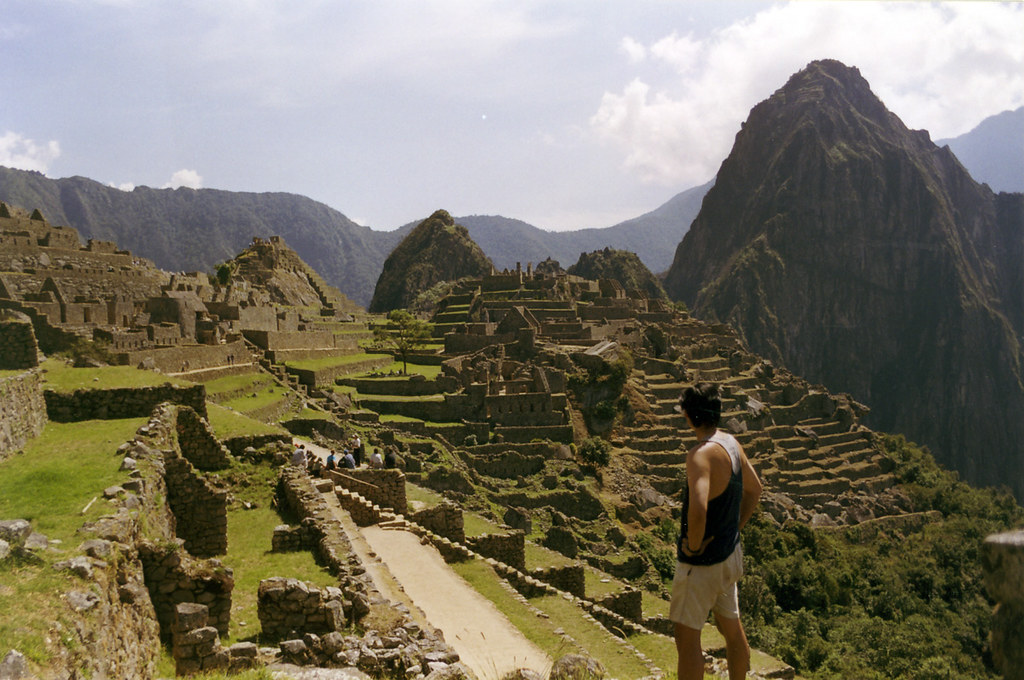 Machu Picchu is of course the most visited Inca city in Peru and there were more fat american tourists than you could point a very large fat stick at… almost a spectacle in itself!

Anyway we’re off to try the local delicacy tonight… deep fried whole guinea pig.. We’ve been avoiding it because Avril used to have them as pets and we heard they are dropped in boiling water to get the fur off and you can see their look of horror on their little faces when they’re served to you! Kind of reminds me of that old joke that goes…. why do you put babies into blenders feet first….. so you can see the expressions on their faces! …doh!!

We are off to Arequipa and Nasca next… any tips for places to stay in Lima anyone?

PS Click here for Peru Pics and the Inca Trail

ok here are some individual replies…

Nicola Thom….Holy Shit! You saw a ghost in Macchu Picchu!!!!!… That is so very trippy. Spoke to several guides who tell us that many of the Inca sites are haunted and we’ve collected some great stories… came by to see you but missed you by about 5 days… let us know where you are and we might meet up and trade stories!

Tamsin…. Wow! The Himalayas sound fantastic!!! You’re lucky you didn’t get altitude problems… keep all your facts and figures because I reckon Tibet and China will be our next big holiday… keep in touch

Sophie… Tahiti sounds great… nice to see you’ll be staying put when we get to Quebec… was it expensive though??

Kendall… are you still alive… we just heard now is a dangerous time to be in Colombia because of the elections…. I’m sure the geo bear would like to be there with you!

If there are any replies we’ve forgotten well do it next time… ciao!