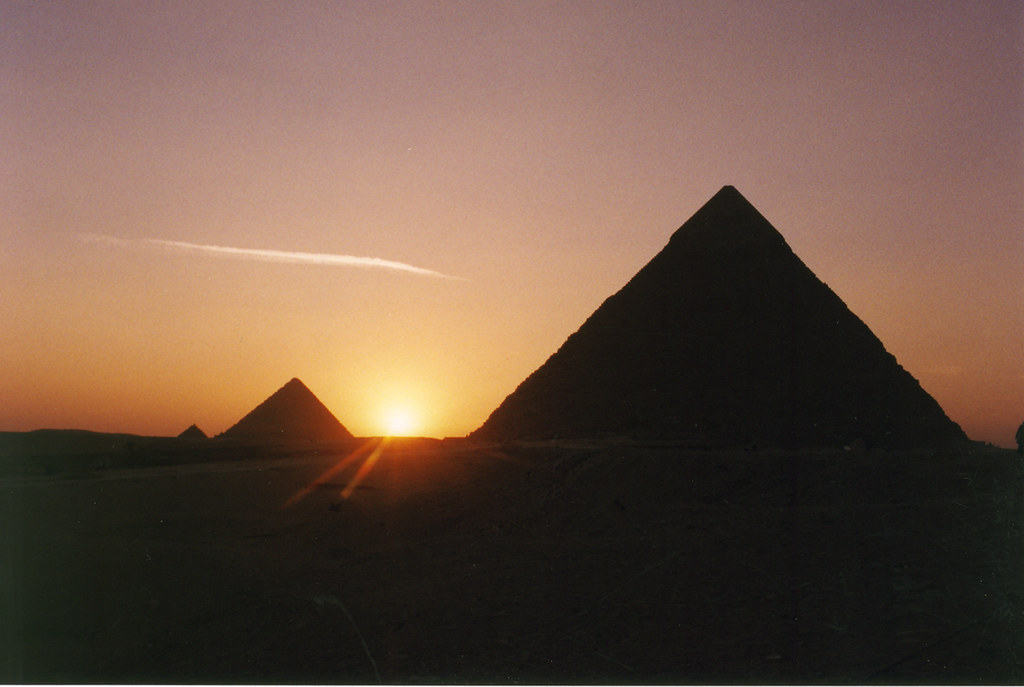 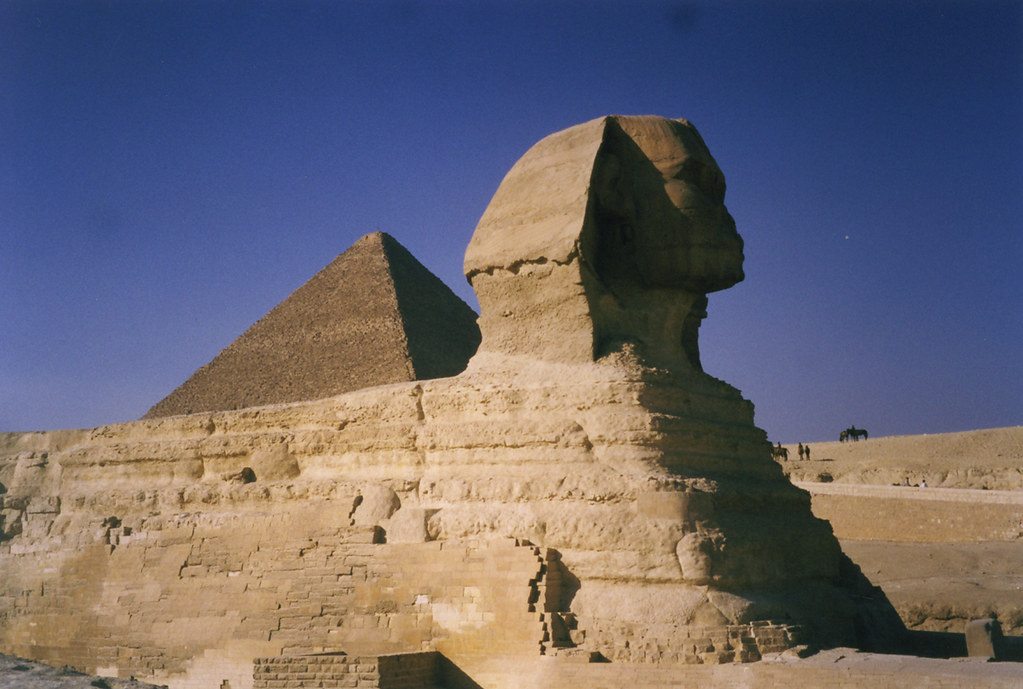 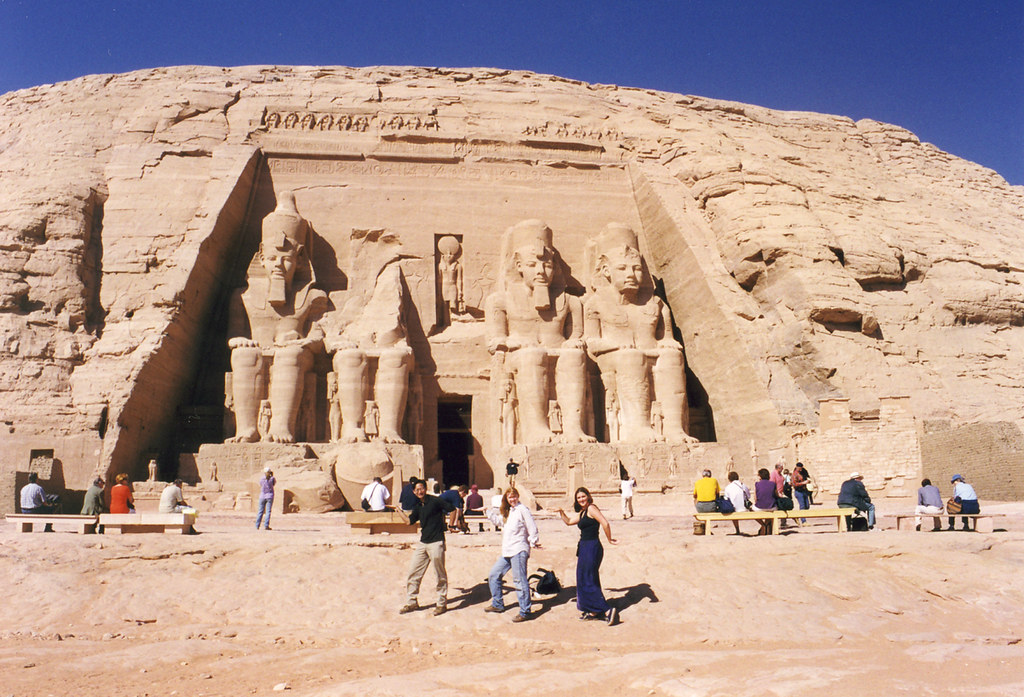 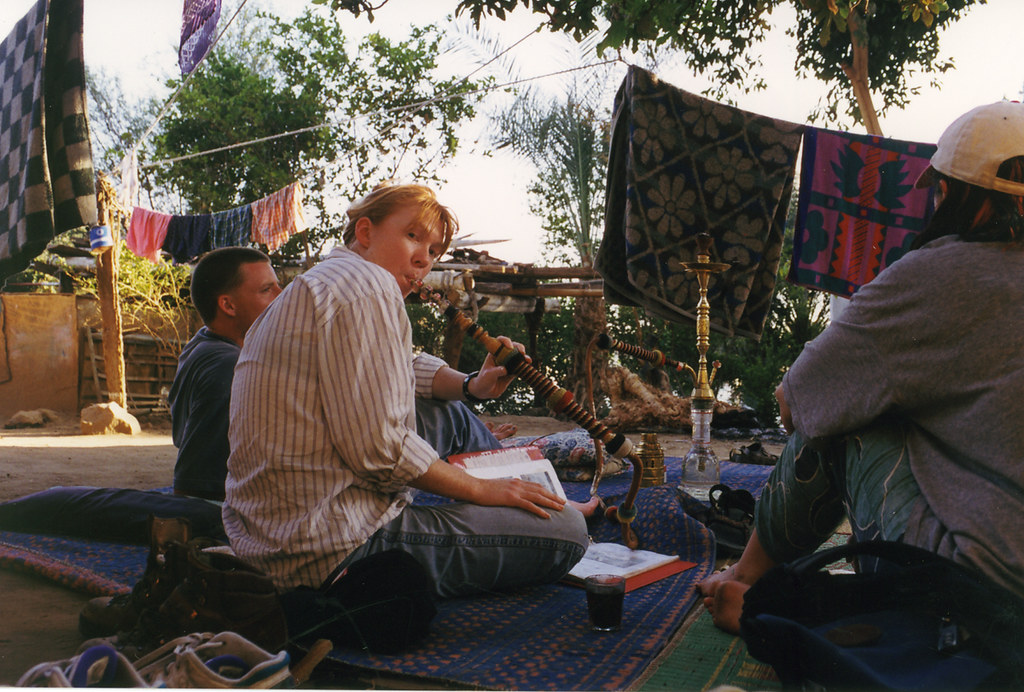 Well, dudes and dudettes, we’ve been travelling in Egypt the last few weeks, and what can say, except Egypt is totally amazing!!!!

Now that we’ve seen rest of the world’s archaeology, we can safely say that being in Egypt is just way too cool for school, dude!!!! We’re in the cradle of civilisation here… but it actually smells like the nappy of civilisation!!!

Anyway, we flew into Cairo and met up with Kendall, a lovely lass who we travelled with in Bolivia and instantly found out that she was worth 100 000 camels, whilst Avril was only worth 50 000…. looks like I’ll be holding onto her until I get a better deal…

Well, we thought that while we were here, we might as well mosey like geezers down to Giza to see the pyramids and honestly, despite all the photo’s we’ve seen, words cannot describe how awesome it is to actually be standing in front of the sphinx with the 2 massive pyramids looming in the background!!!!

A totally amazing experience except for being hassled the shit out of by camel drivers and groping Arabs… We soon learnt that although there are nice Egyptians, all the obnoxiously rude arseholes live at Giza!!!!

We did the standard camel ride around the pyramids despite being told that the camel drivers are rort beasts…. and sure enough, we had a huge fight when the tosser wouldn’t let us off the camel until we paid him heaps of money… Fortunately, the police intervened before we went some serious biffo!!!!! 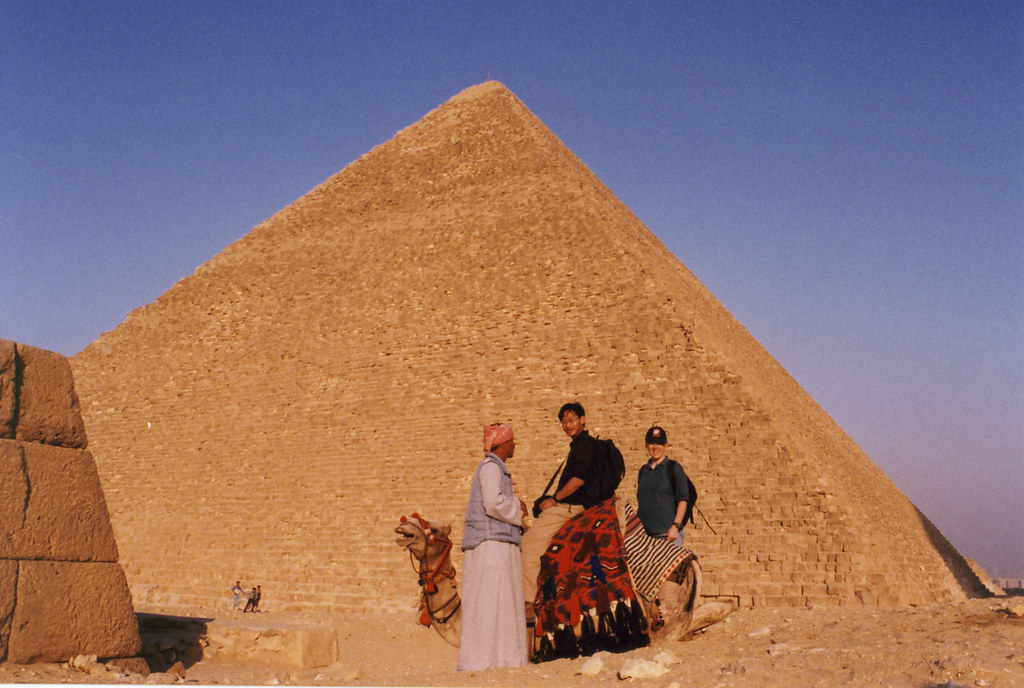 It was here that Avril discovered that the real reason why Muslims perform female circumcision is that camel riding and external genitalia just don’t mix!!!!!

From Cairo we jumped on a train down to Aswan in Southern Egypt, and then realised that we would be travelling through middle Egypt on the day after the anniversary of the Luxor massacre last year… not a real good idea!!!!!

For those of you don’t know, the Islamic fundamentalists here want to hurt the government by destroying the tourist trade, so shooting tourists is such a lovely way to prove a point, and middle Egypt just happens to be the fundamentalists stronghold… However, we weren’t too concerned, until we realised that everyone on the train was packing a hand gun except us!!!!!

Aswan was cool, but even cooler was Abu Simbel, a temple in the middle of the Sudan desert that we flew to… It has 4 massive statues of the Pharaoh Ramses II built into a cliff side guarding a doorway into a temple with amazing hieroglyphics… each statue was over 30m tall so it was very very impressive!!!!! We would even say that it was probably more spectacular than the pyramids!!!!! 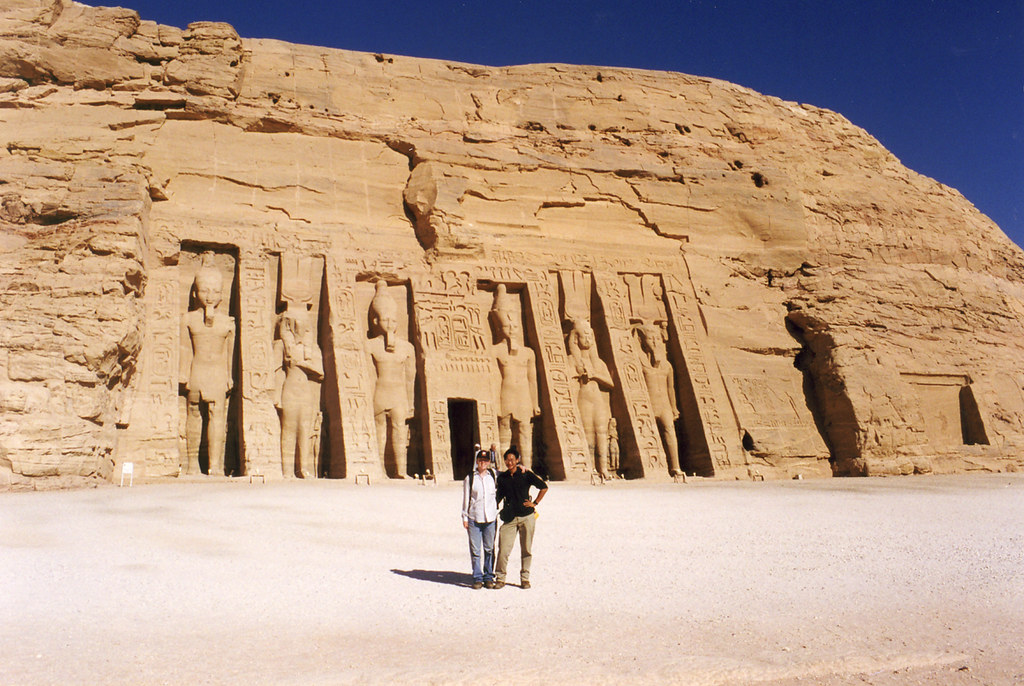 From Aswan, we did a 2 day felucca (sailing boat) trip down the Nile to Luxor which was excellent!! We met some cool Aussies and Kiwis who we are still bumming around with. We floated for a couple of days doing absolutely nothing whilst watching rugged deserts rise from the palm trees lining the bank… totally relaxing!!!!!! 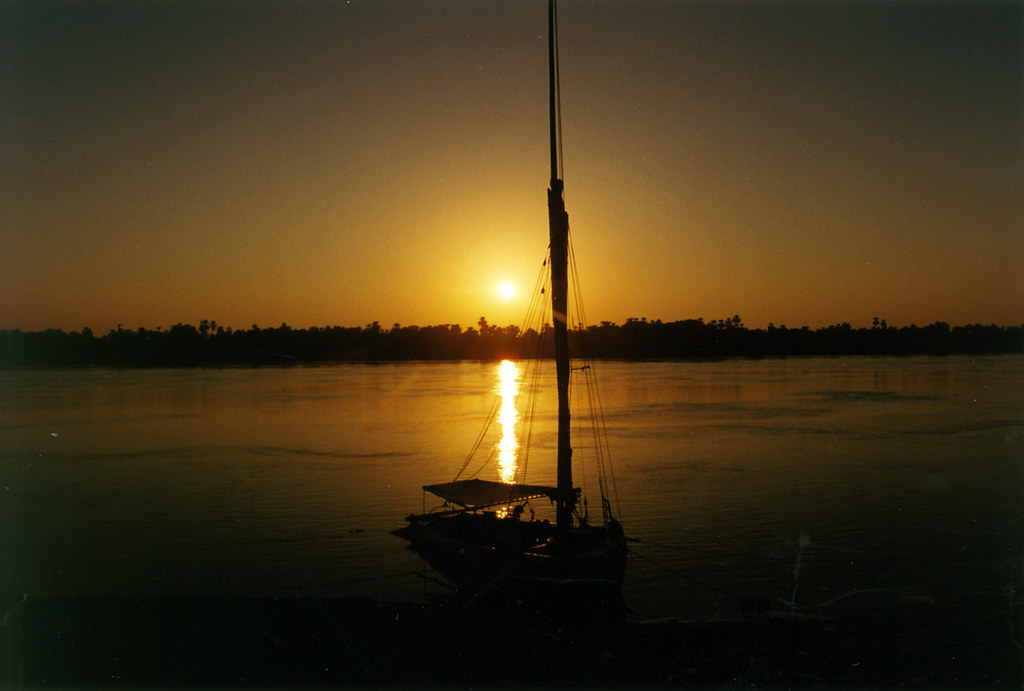 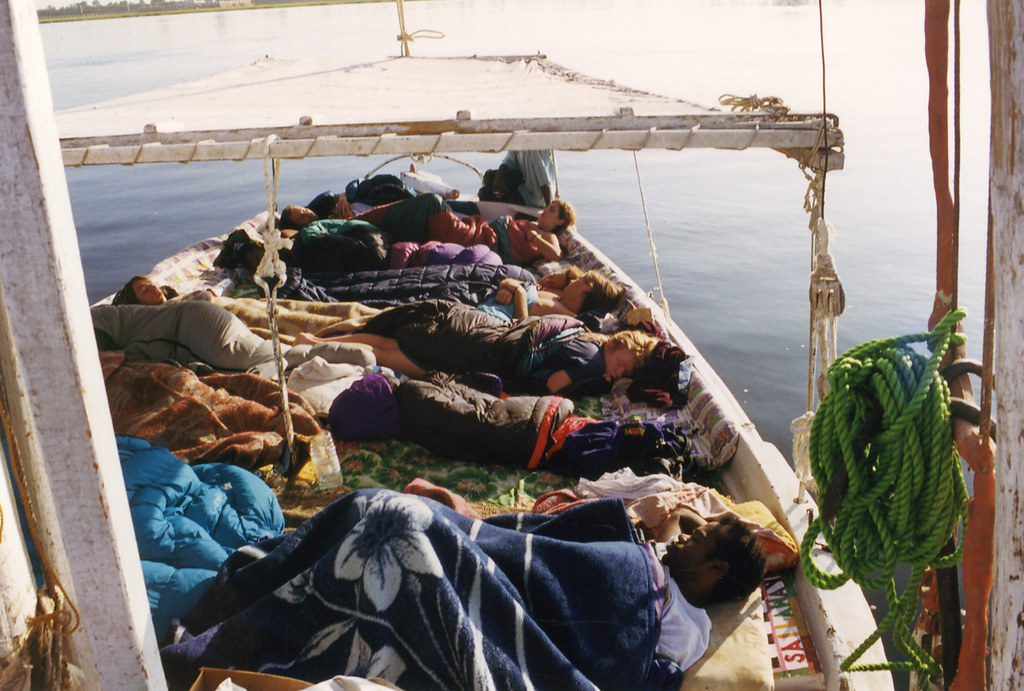 We scored a truck for the final leg of our trip to Luxor, which was really scary… Not only are Egyptians drivers dangerous, but we also had to be put into an armed convoy since no tourist is allowed to travel alone thru middle Egypt…

Hence, we were in a row of buses and trucks with military police escorting us… it was kind of like putting a big sign on our heads saying…yes we are tourists… please shoot!!! It not very reassuring!!!

Anyway, we got to Luxor where the massive necropolises of the Valley of the Kings and Queens are, and spent a few excellent days crawling thru beautifully painted tombs full of hieroglyphics hidden under the rugged desert landscapes…. 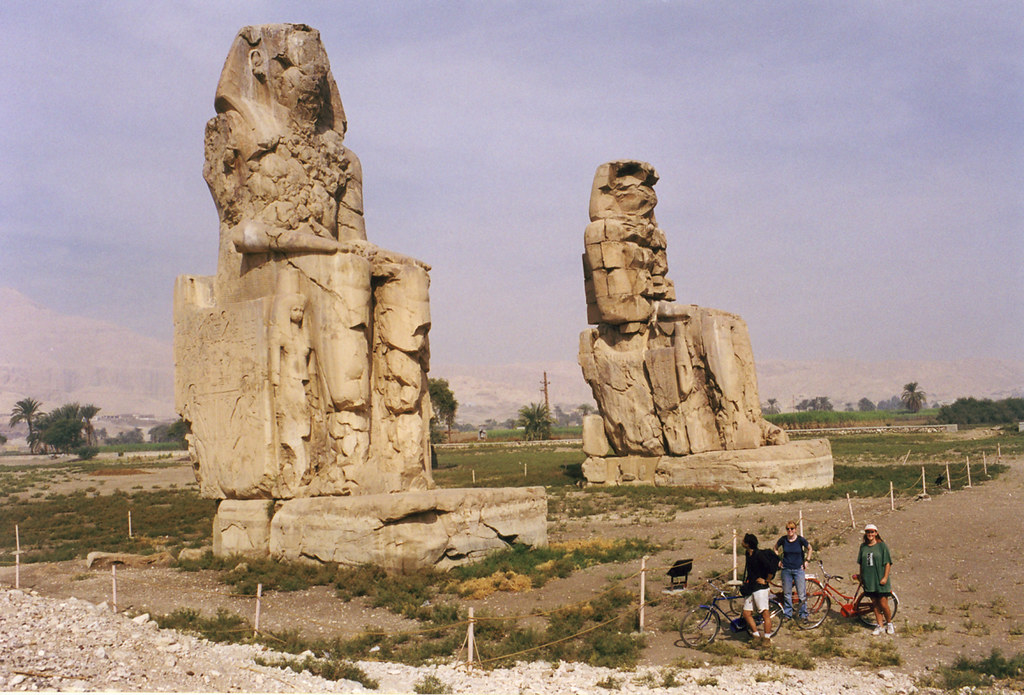 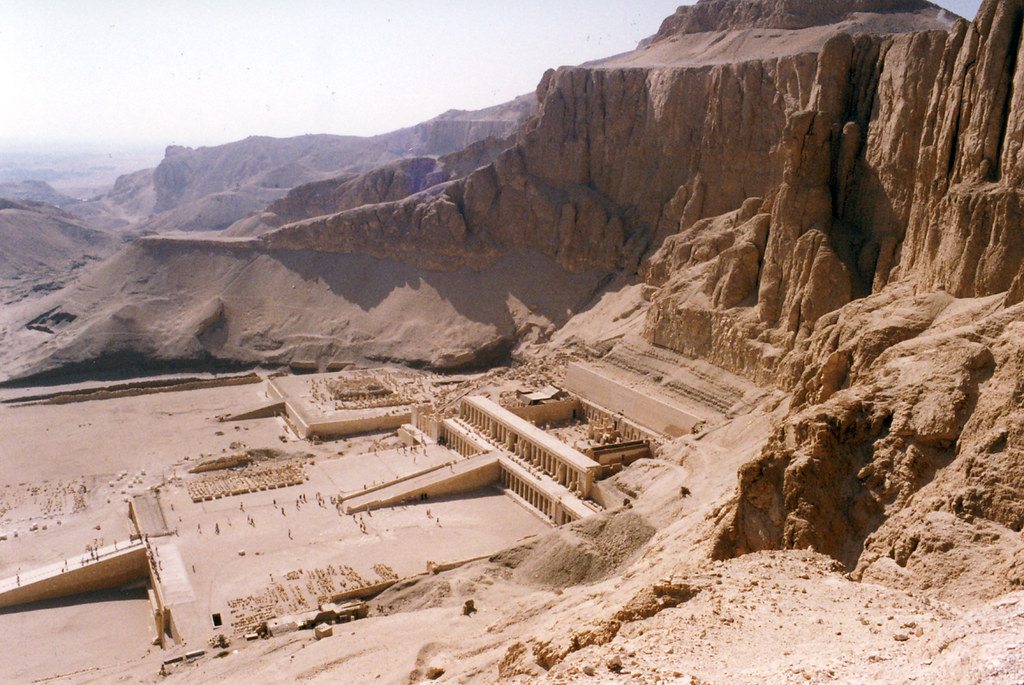 Apparently the 6 gunmen who were only teenagers opened fire and then walked thru the dying people stabbing all those who were still alive… now the we’ve seen the site, we can appreciate how very few people escaped…. really quite horrific!!!!

Luxor was an absolute wealth of archaeology, and since their tourism died after the massacre, people were so nice to us… Well that was until we got on the wrong side of MR IBRAHAM the local mafia fatman who ran our hotel!!!! 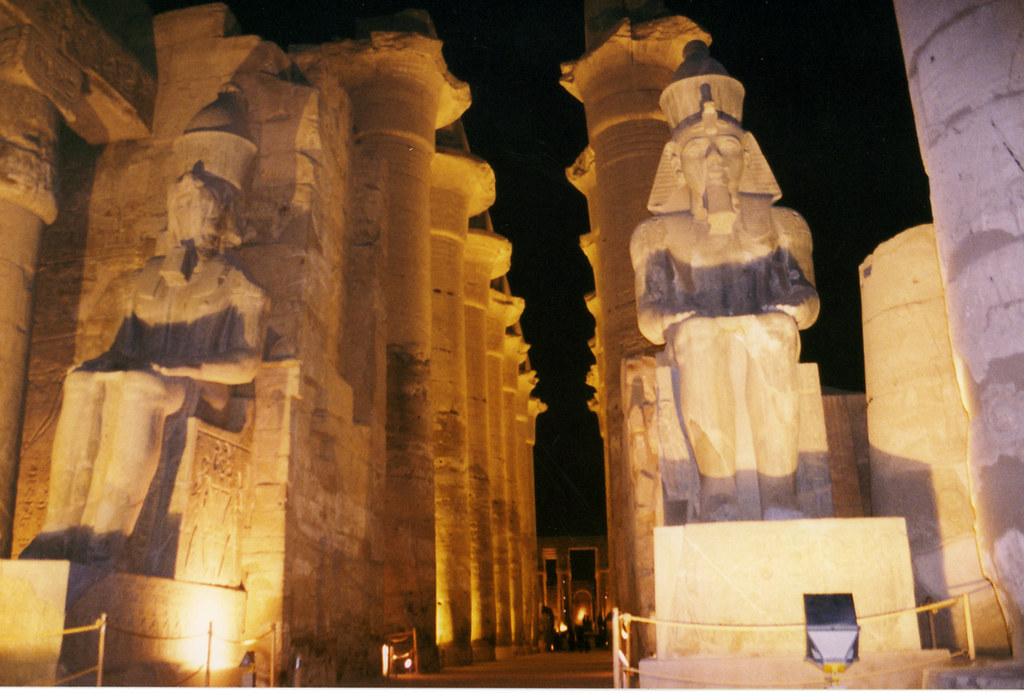 Somehow Avril managed to piss him off by refusing to buy water off him until he had correct change… All innocent enough until he went off about us not trusting him…. He was totally raving like a mad man, so it didn’t help when Kendall threatened him by waving the Lonely Planet at him and saying that with one letter we could destroy him!!!!

…And I guess me taking a photo of him and calling him a very bad man didn’t help either… Anyway, soon he was by far angrier than a very angry Arab with a large scarab up his sphinx-ter!!!!

So next thing we knew, we got kicked out and had to spend the entire day in McDonalds until we could catch a bus out… So make sure if you come to Egypt, don’t stay at the HAPPY LAND HOTEL!!!

Anyway, because it seems to be a crime against Allah to drive with your lights on at night, overnight bus trips are far more dangerous than saying Celine Dion is shit in front of a group of Arabs… but somehow, we made it safely to Dahab where we are now…

Dahab is a way cool backpacker resort on the coast of the Red Sea well within camel spitting distance of Saudi Arabia and people often come here for a week and stay for a month, and we’re finding it hard to leave too!

Our days are spent lying on cushions on the shoreline and drinking milk shakes and eating pancakes whilst watching Bedouin Arabs on their camels dodging scuba divers and stoned backpackers on the beaches… totally stylin’ man!!! (new hip saying kids!!!) 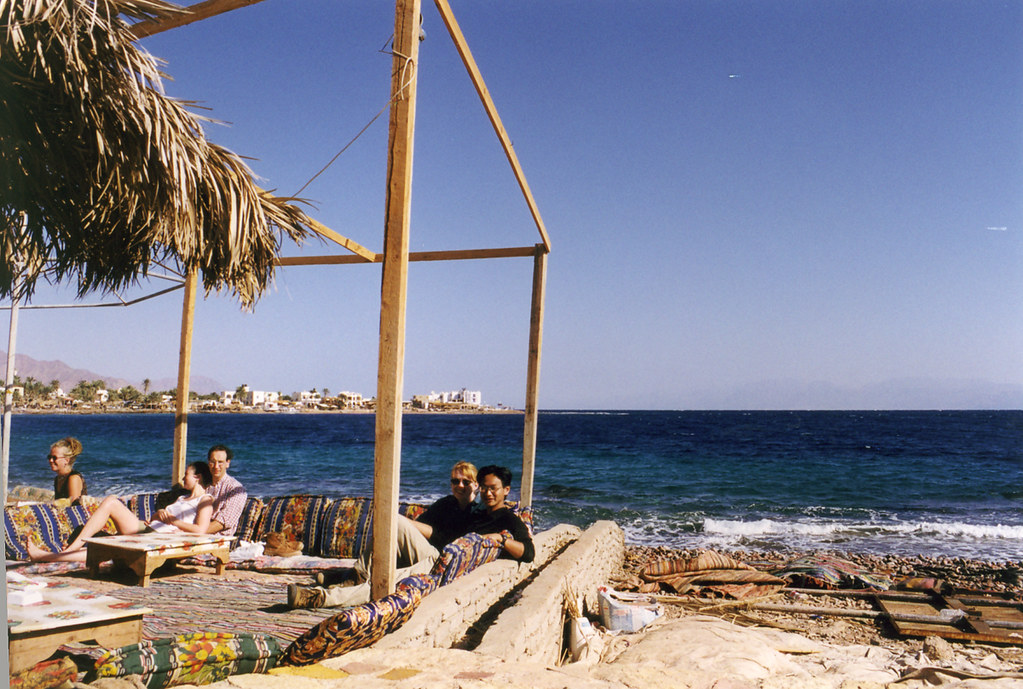 We’ve really only interrupted our busy schedule to snorkel the amazing reefs and climb Mt Sinai, the mountain where Moses received the 10 commandments… 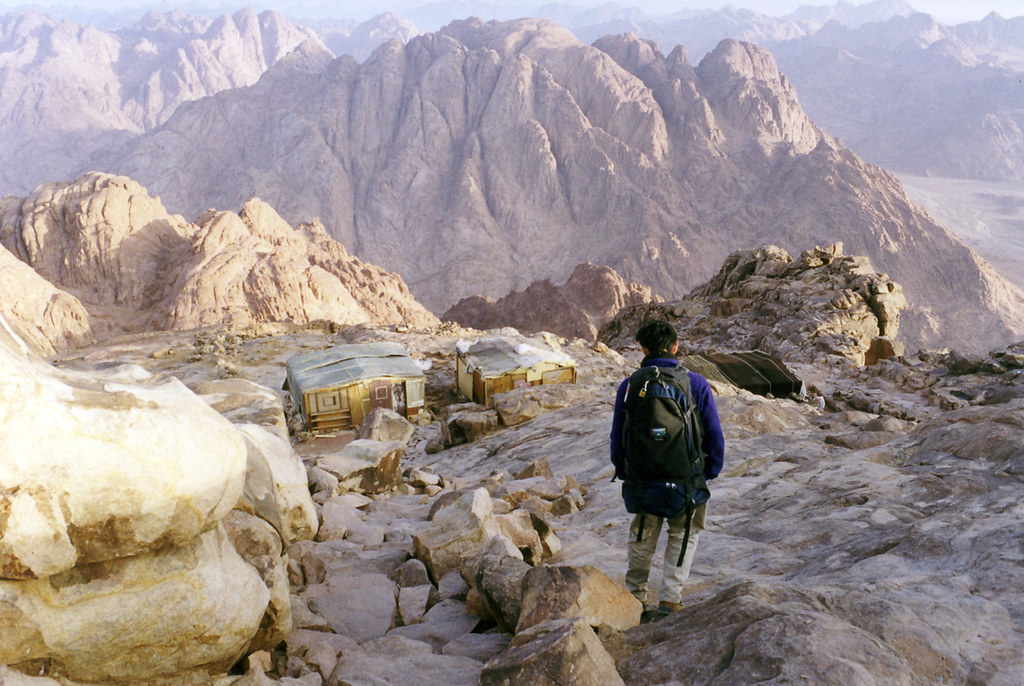 However, the only burning bush we’ve seen was when Avril dropped ash onto her crotch!!!! It was pretty amazing though, since the thing to do was to start climbing at 2am in the morning just to see the sunrise… Excellent scenery, but we totally underestimated the coldness of the desert, and spent the night huddled under a rock for warmth!!!! 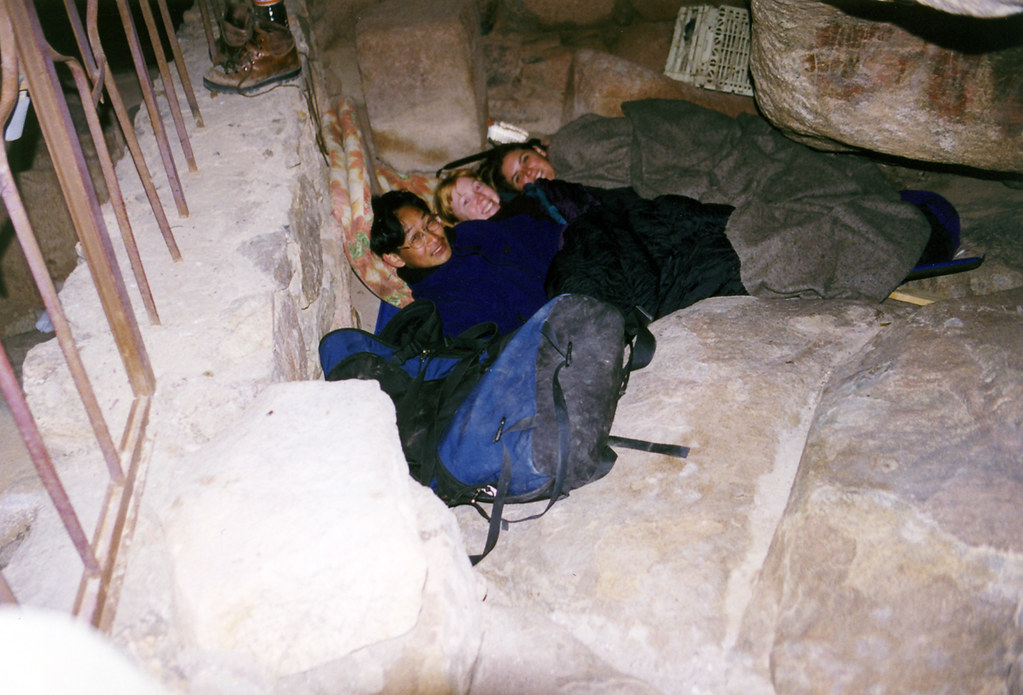 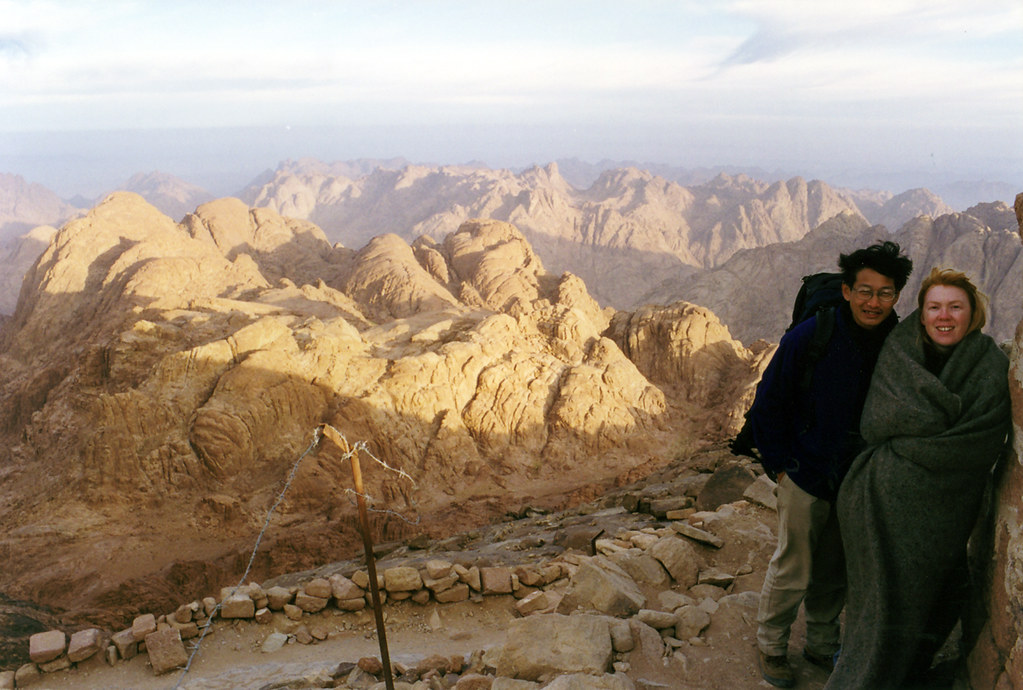 We’ve really enjoyed Egypt and even all the shit that goes with being here, and we’ve met so many Aussies here with excellent stories of travelling in the Middle East, that we are fired up to keep travelling… However, we fly out of Cairo on Wednesday to Hong Kong and after soooo many felafels, we are really looking forward to a good stiff Peking Duck…

We’ll be catching up with relatives in Hong Kong and then we will be home on Mon 21 December at 0850 on Ansett flight AN1888 if anyone wants to pick us up…. I don’t think we remember where home is anymore….

Anyway, lots of love and camel spit to all of you… hopefully our next email will be from home… Yay!!!!!

Peter and Liz….. wow…CONGRATULATIONS on the wedding in Africa which is so cool!!! We love getting your emails… you guys are having such an exciting time… would love to meet up with you guys at home and hear your stories and see photos…. drop us a line when you are back

Greg Constantine….. hope Jordan was fun let…. let us know how your trip went when you go home

amanda nash….. hey..sorry we missed you when we left… have heaps of fun in morocco and stay out of trouble!!!!!!