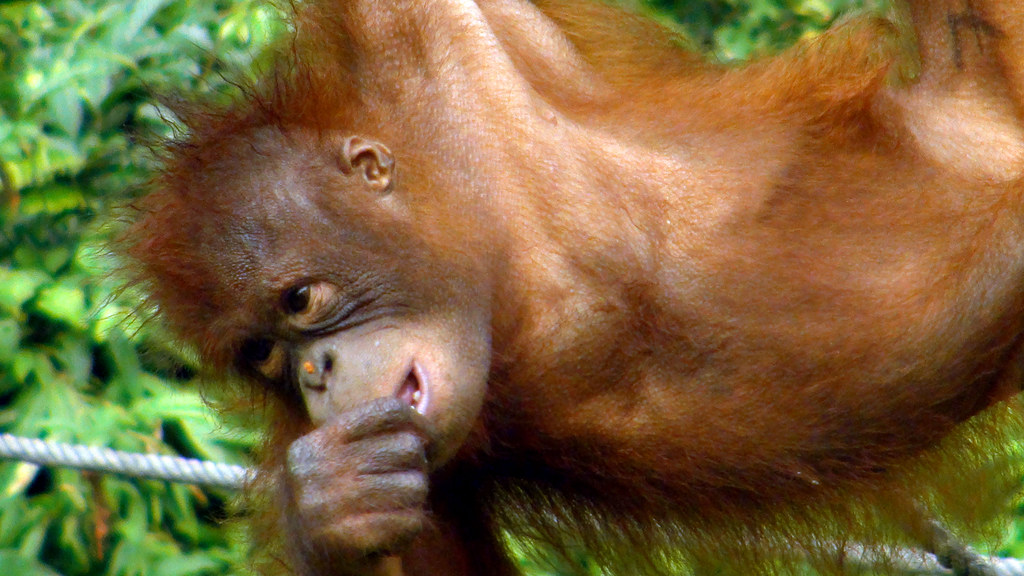 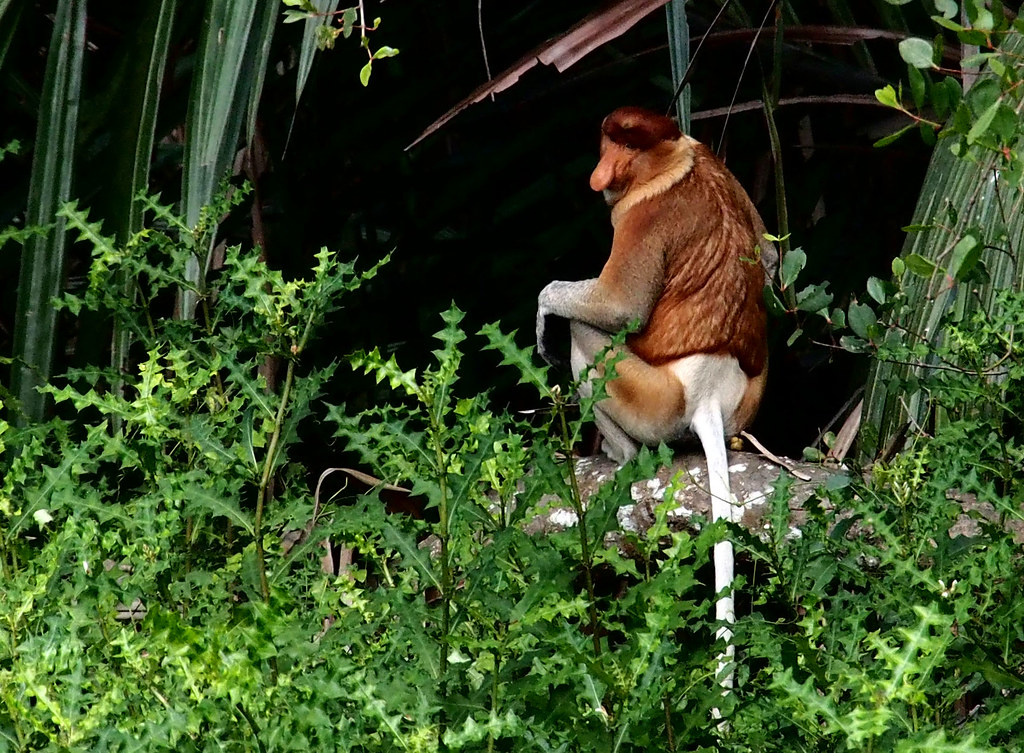 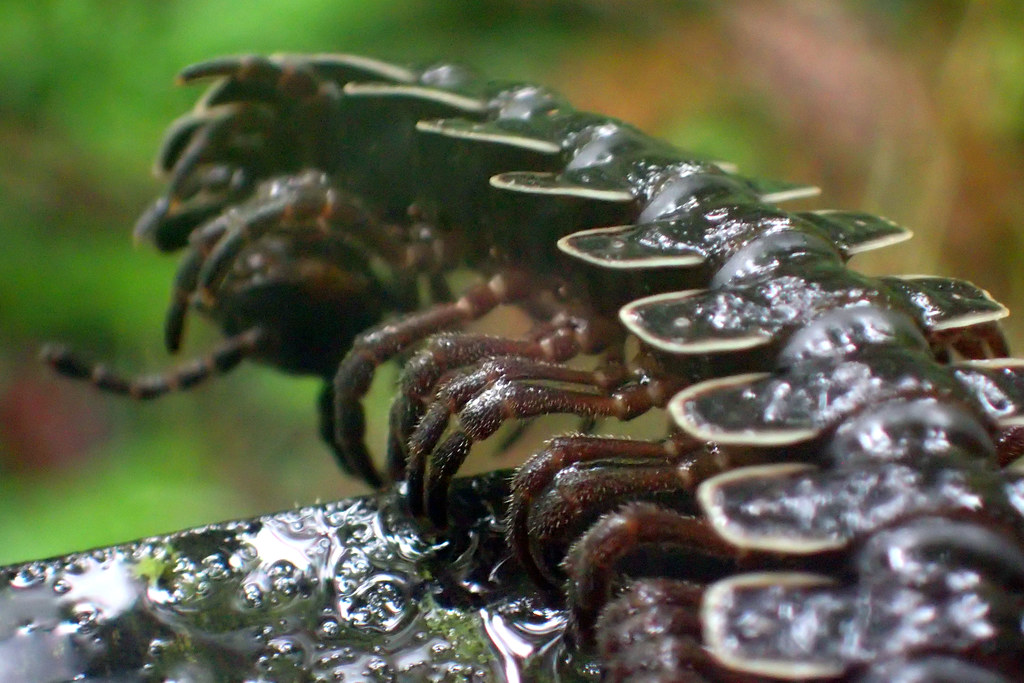 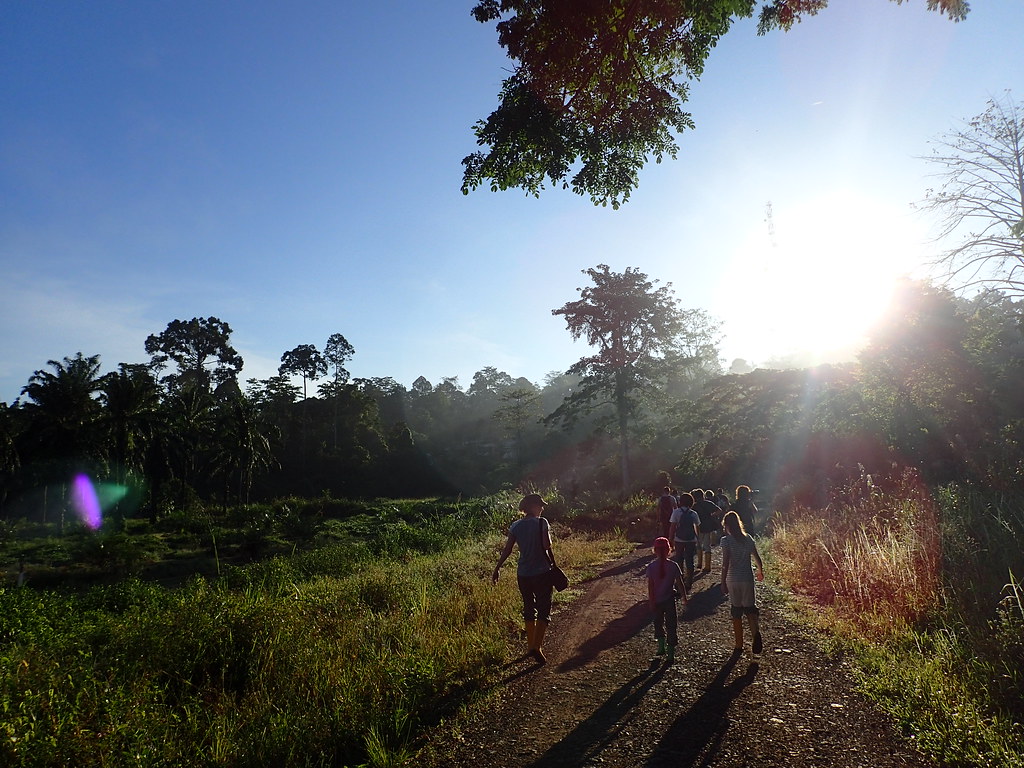 Selamat datang to all you funky monkeys and groovy gibbons

So we are sitting here in our hotel room in Bandar Seri Begawan in Brunei Darussalam which true to its reputation is so far a boring-arsed city. It’s obviously wealthy from oil money, and everyone here is really lovely, and the place is beautiful and manicured and surprisingly clean for an Asian city. But it really is a dull-arsed place.

And since they have Sharia law here, everything is shut down for 2 hours for Friday prayers so there’s really just hanging out in the hotel which is the perfect time I guess, to type up another travel blog.

So dudes and dudettes… we only got out of the Borneo jungle 2 days ago and once again we have been reminded of how FREAKY monkeys are, when we experienced a David Attenborough certified…

…RUMBLE IN THE JUNGLE!!! Borneo style!!!

Now for those of you long time readers of our blog, you’ve have probably realised how Ced is generally fearless, never afraid of confrontation and is extremely confident in his ninja busting kung fu skills…

…but if there is any one thing that TOTALLY freaks him out… it’s friggin MONKEYS!!!

Not only has many years of playing Donkey Kong and watching Monkey Magic on TV in Ced’s youth always taught us that monkeys will always win a fight… in any situation… but also in our travels we’ve been shat on by monkeys in Guatemala, charged by Gorillas in Rwanda, and held hostage in our room by Baboons in Ghana, so we have a very healthy respect for their badarseness.

So we’d been staying at the Sukau Rainforest Lodge which is a National Geographic certified ecolodge where David Attenborough stayed. It’s based 2 hours by speed boat up the Kinabatangan River in Eastern Sabah Borneo and the thing to do here is to go river cruising looking for wildlife. 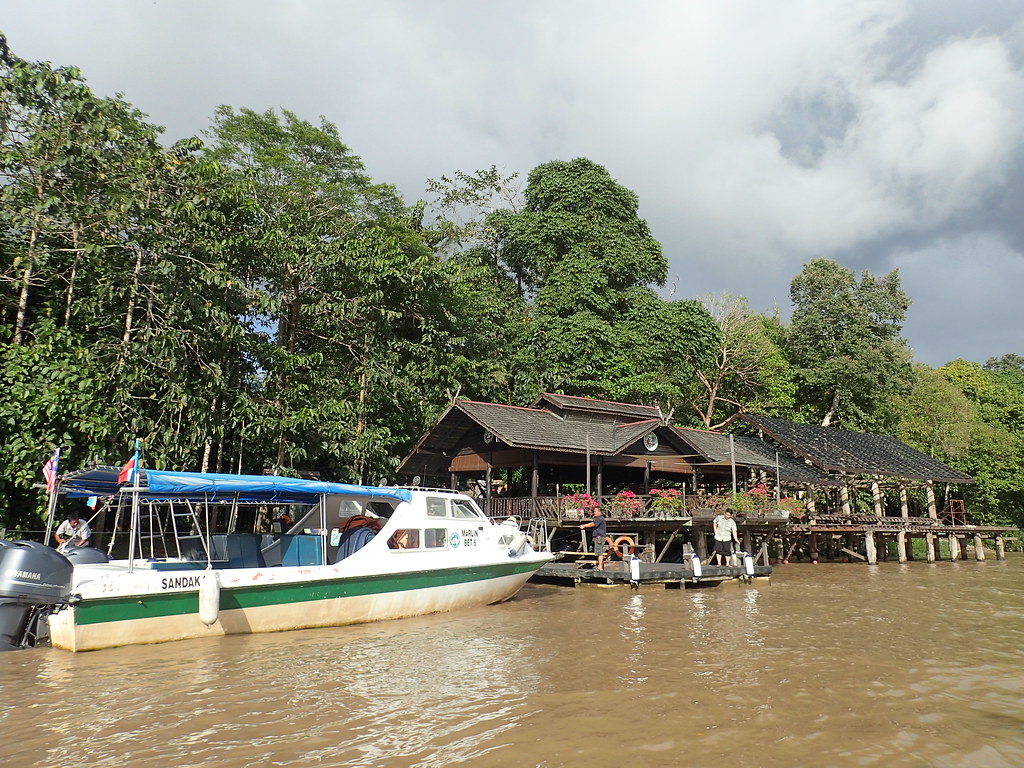 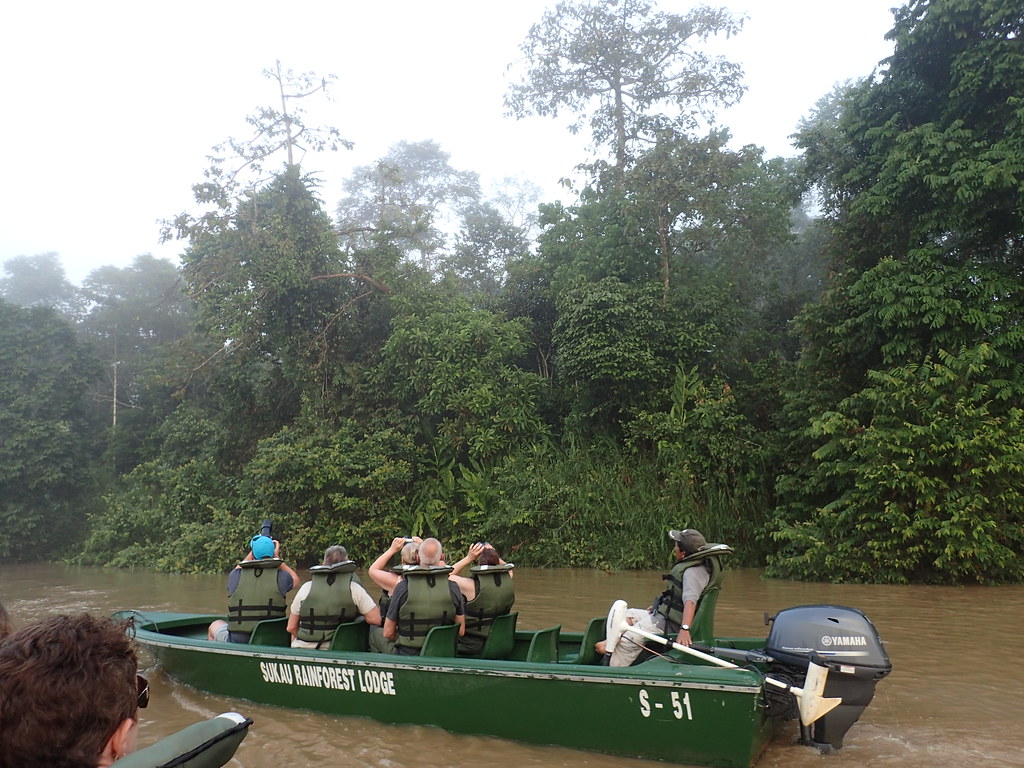 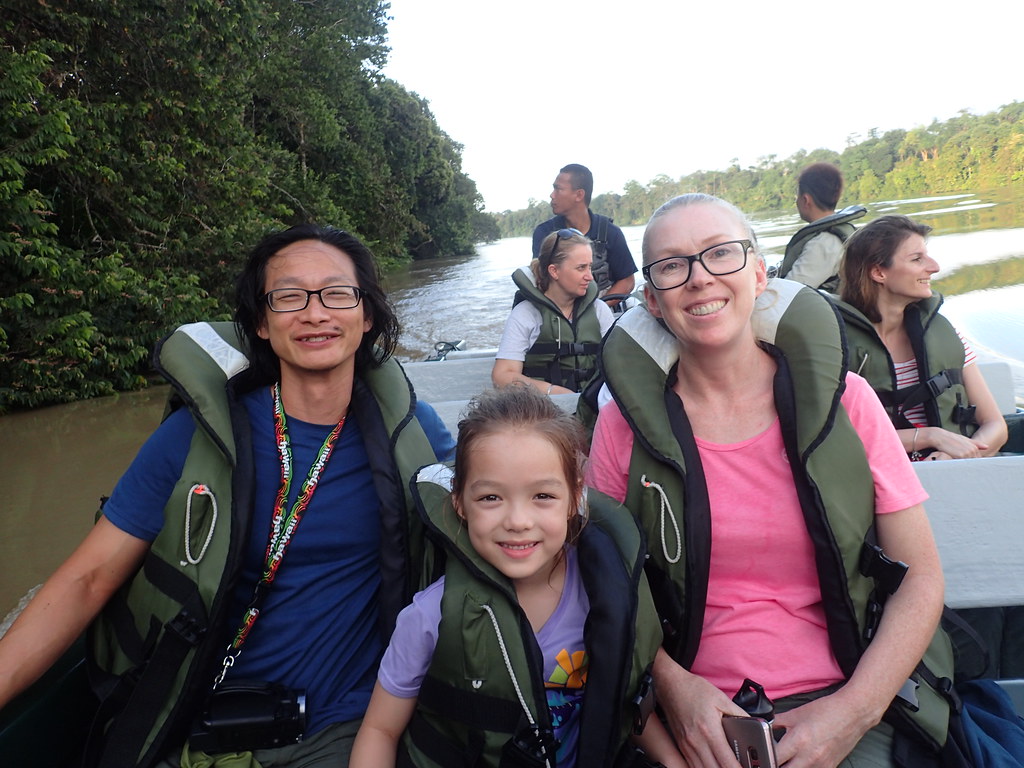 WTF??? What the heck did those orangutans do before humans helped them out???

Anyway… I digress…
So we then see this large family of Pigtailed Macaque monkeys crossing from one side to the other. It had been a slow wildlife sighting day so we were happy to just sit there and watch for a while as monkey after freaking monkey crossed over from one side to the other… which is kind of mesmerising like in imagining sheep jumping over a fence kind of way… 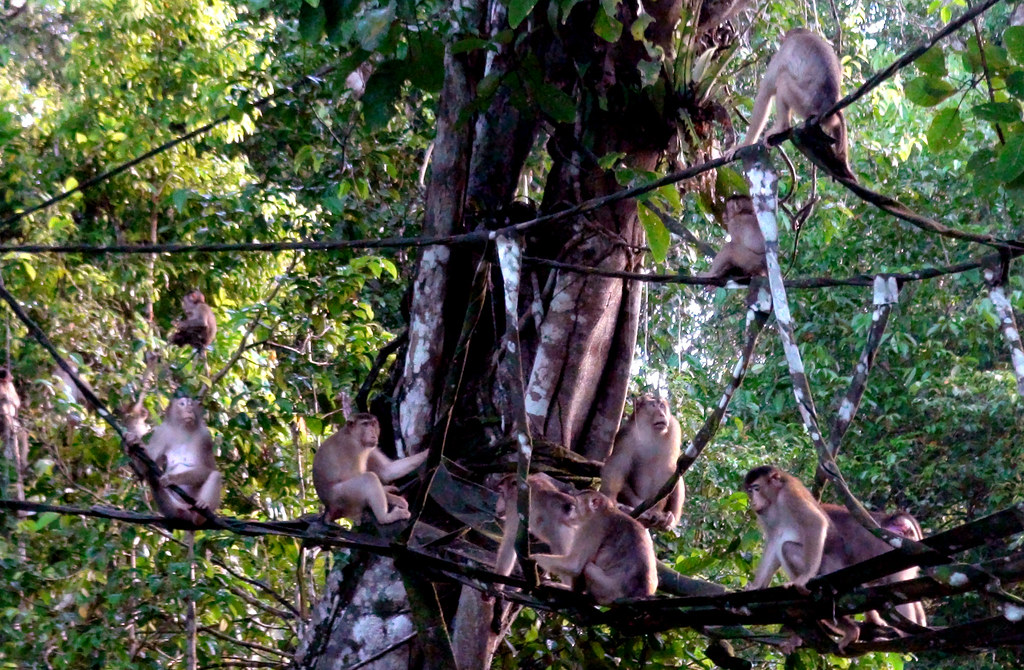 Anyhows, I’m slowly being hypnotised by monkeys and closing my eyelids for some monkey induced sleep when all of a sudden the scary-arsed monkeys started baring their teeth, jumping up and down  and screeching at the top of their monkey voices!!! HOLY COW… we suddenly realised some serious monkey shit was about to be flung!!!

Now if you’ve seen that Basement Jaxx video for “Where’s your head at?” then you’ll have an idea of how freaky  monkeys look when they go badarsed!

Well we suddenly realised that there were 2 families of monkeys and the second family had obviously intruded into the first family’s personal monkey space, and at that stage all out war broke out!!! 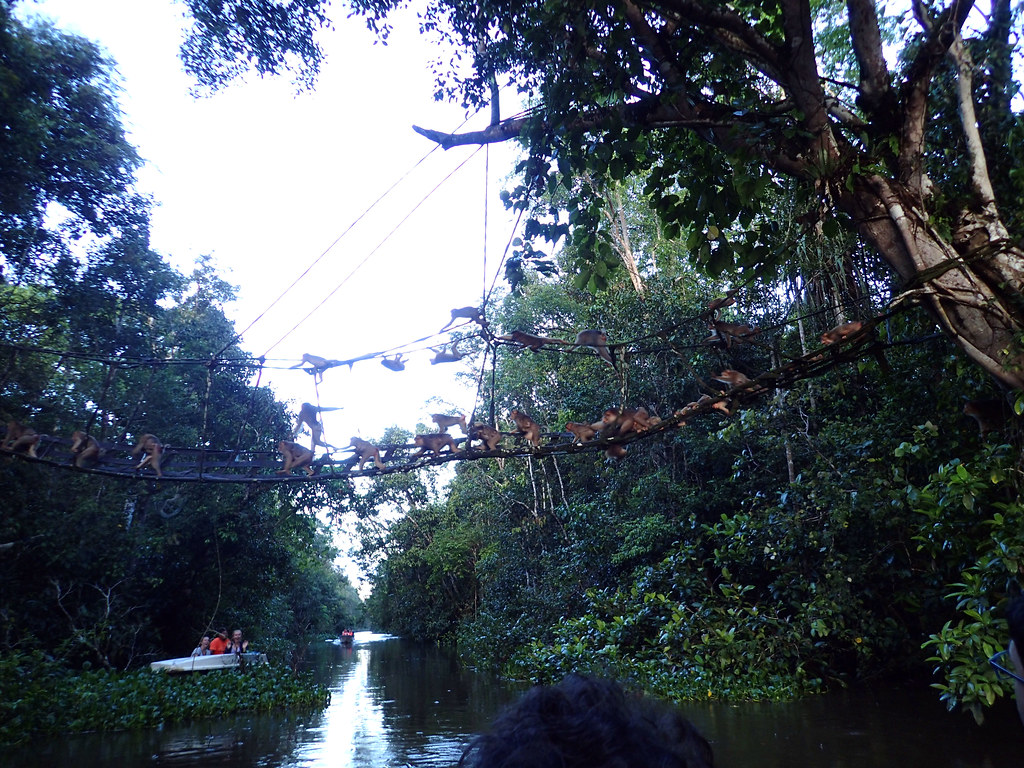 Now I’ve uploaded the video of this to youTube at this link, which you can watch below if you are bored. But all you need to know is a mass of monkeys running for their life and stumbling over each other in panic, as well as jumping for their lives off the bridge into the jungle below… is FUCKING FUNNY!

So’s anyways other than monkeys, we did manage to see an orangutan in the wild… 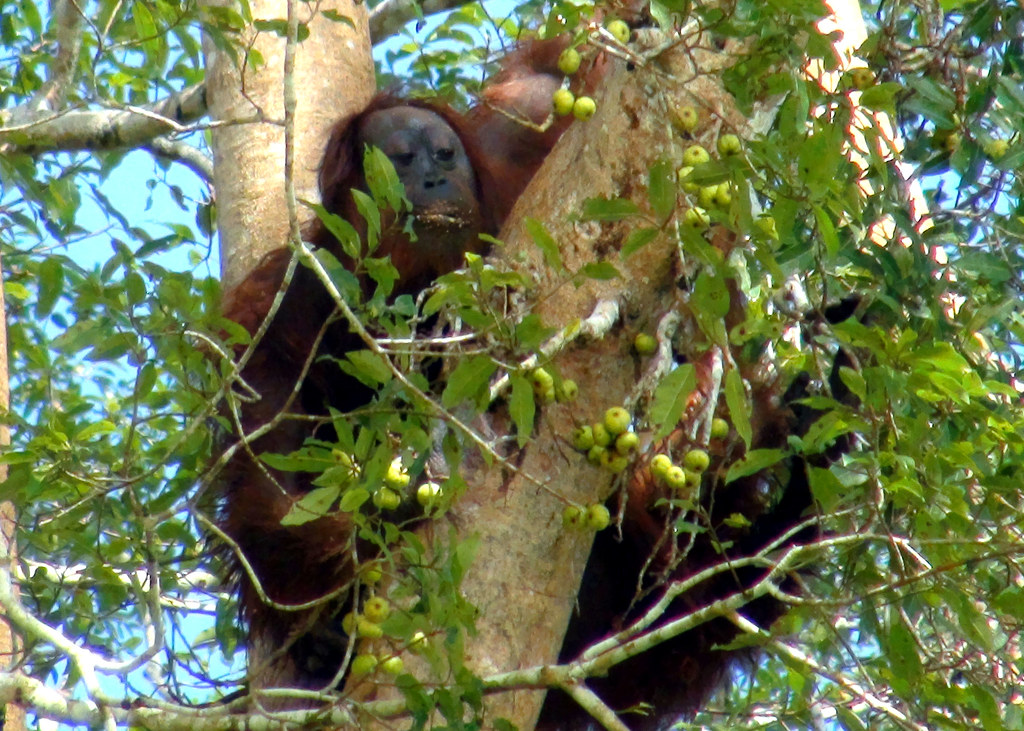 …on top of seeing them at the over touristed Sepilok Orangutan Sanctuary. 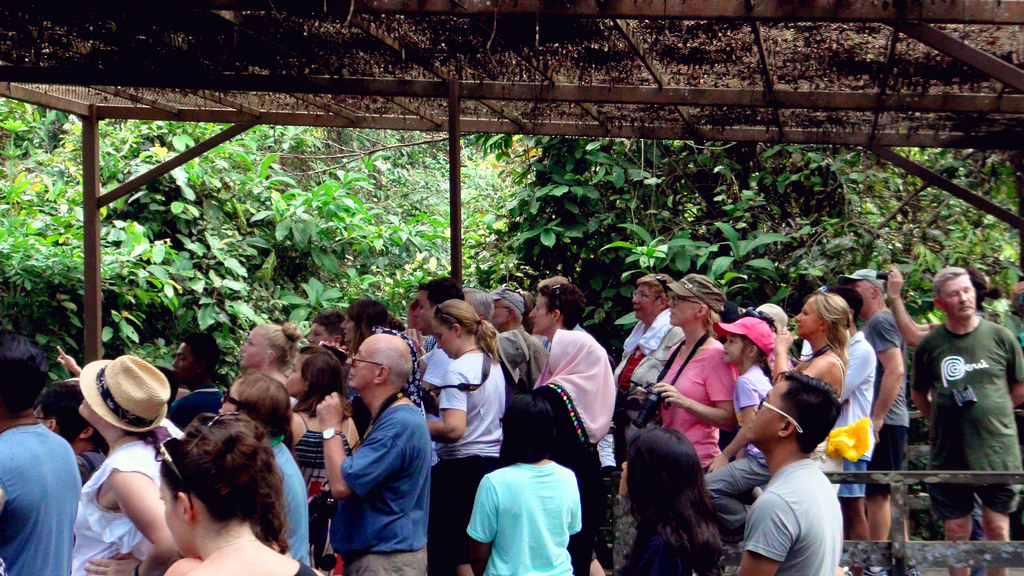 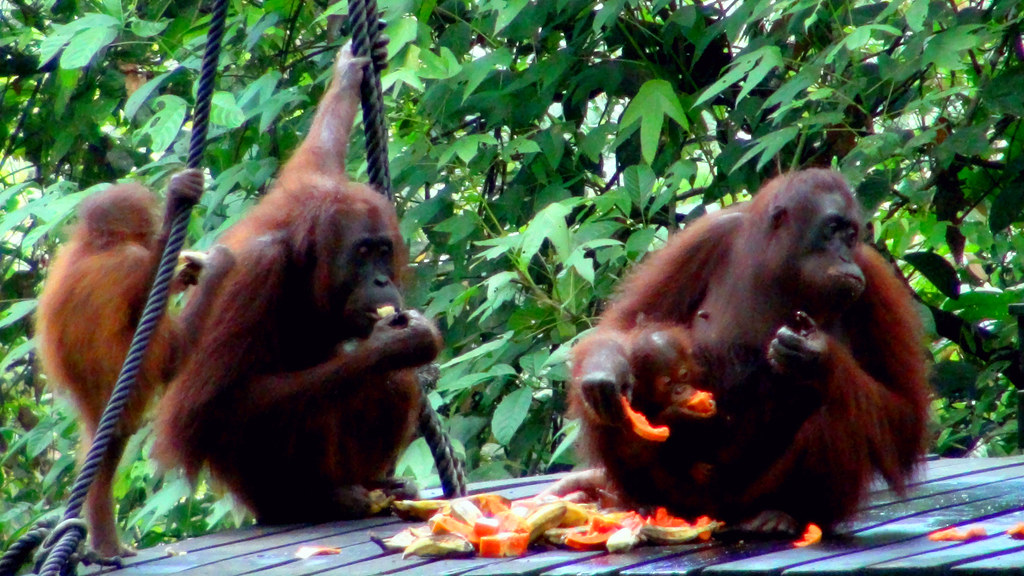 Unfortunately after hearing about so many people having an intimate experience with orangutans coming close to them we were a bit disappointed in not really seeing any up close.

We did make do though with seeing plenty of probocis monkeys which with their fat bellies and big noses all look like fat Gerard Depardiou’s. 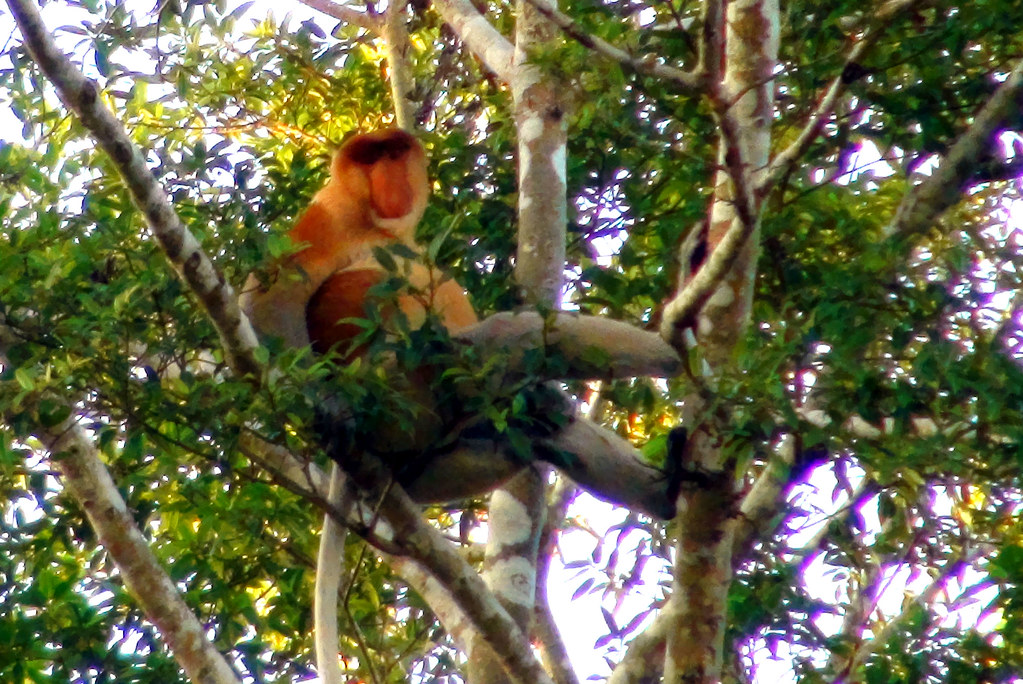 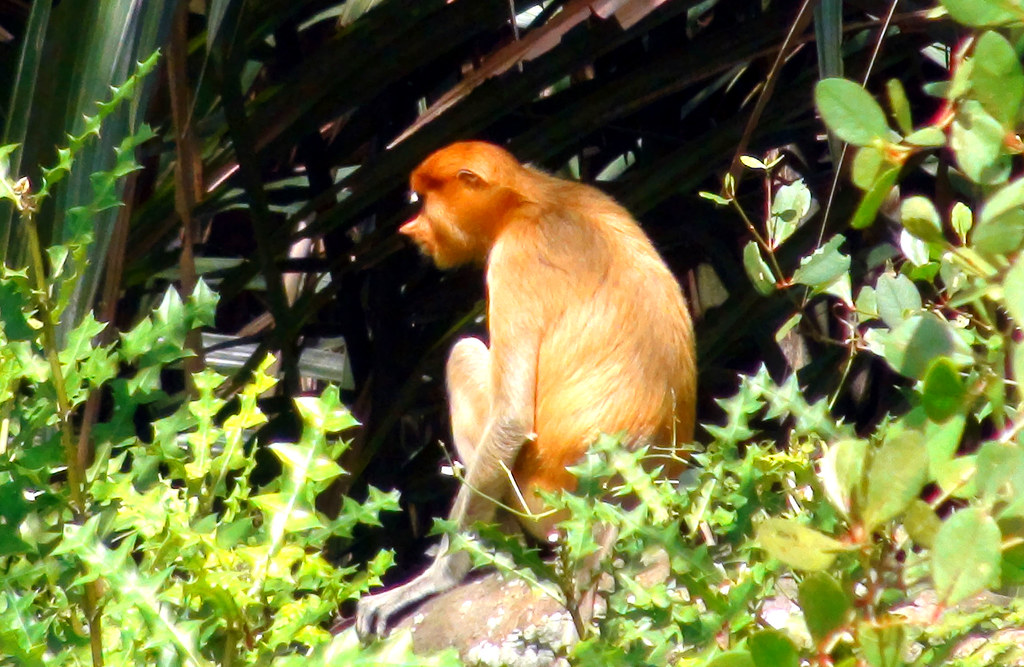 And we did however see heaps of bugs and reptiles including a tarantula the size of my palm just hanging out on a tree behind our lodge. 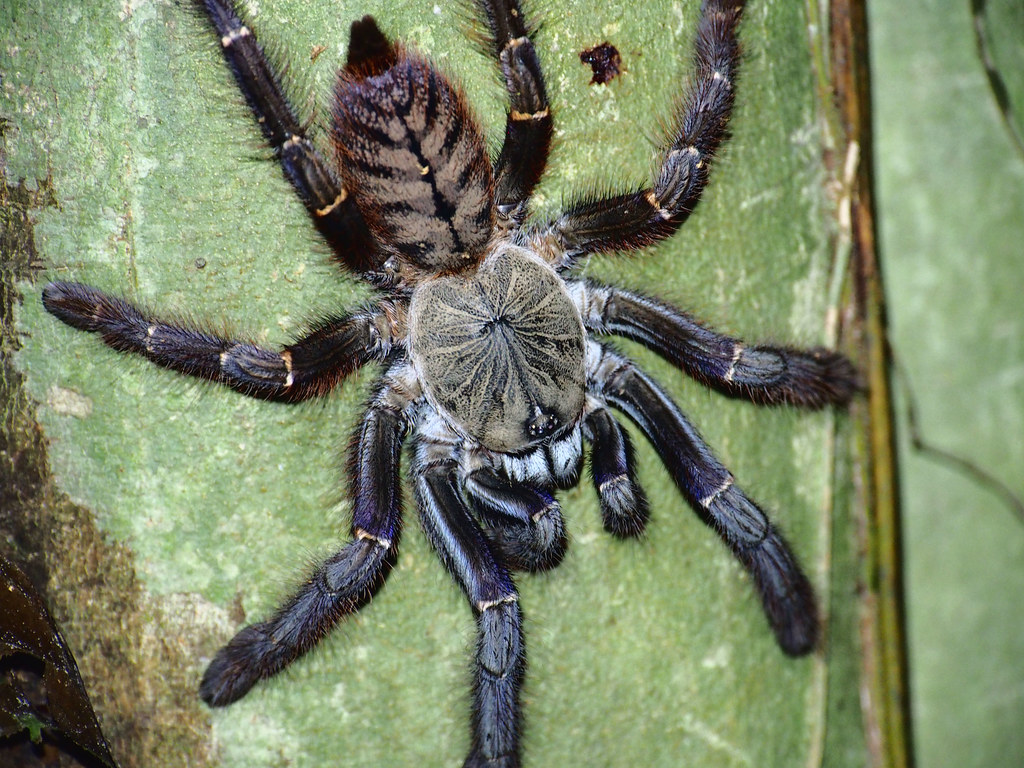 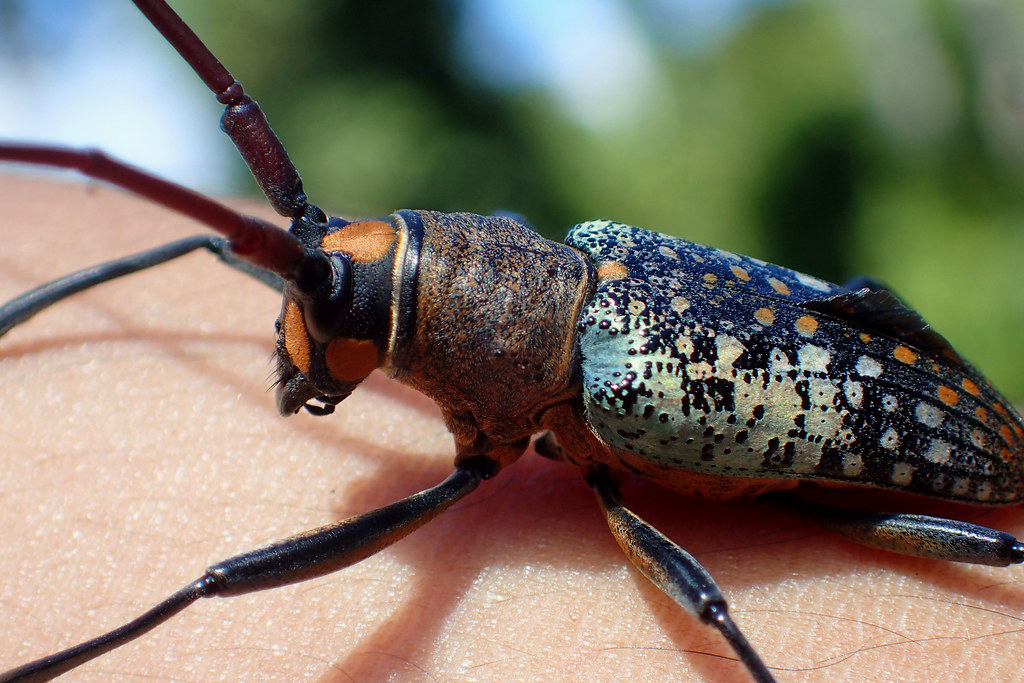 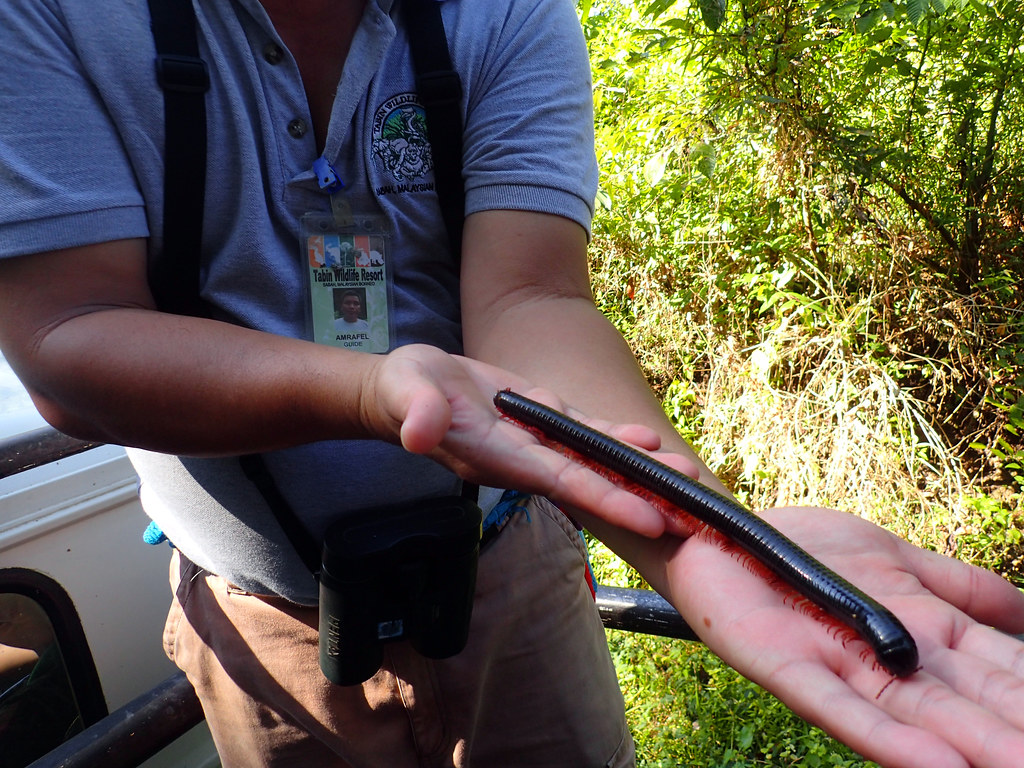 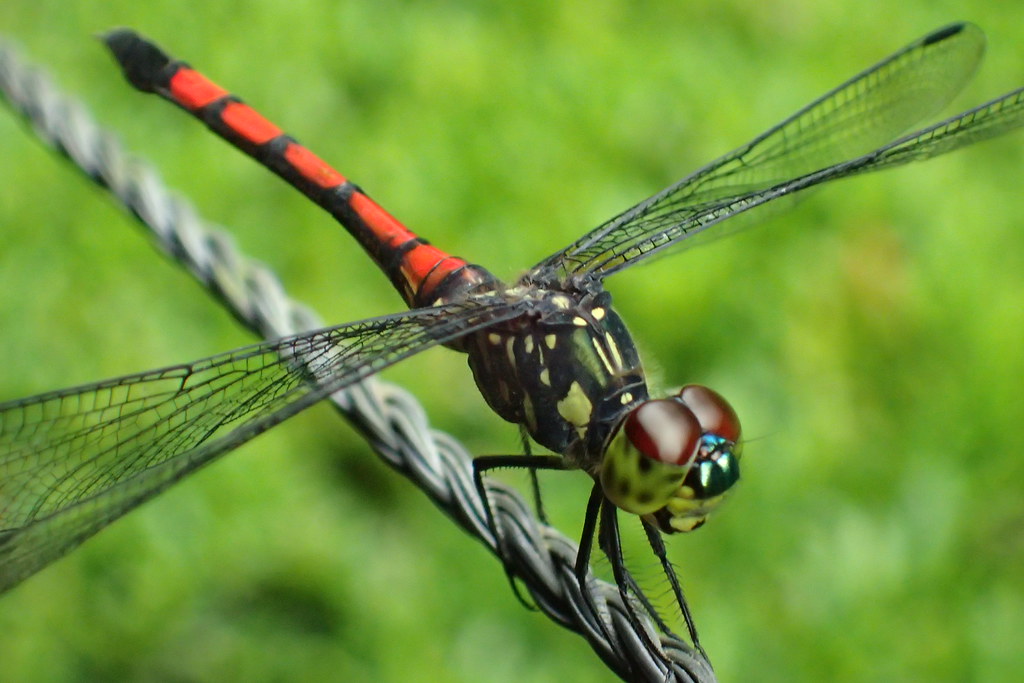 And of course there was also a heap of different birds. Now most of you know that I really don’t get bird watching… It bores the crap out of me… so instead I get my enjoyment out of paying the crap out of people who are bird watchers… of which Borneo has plenty. 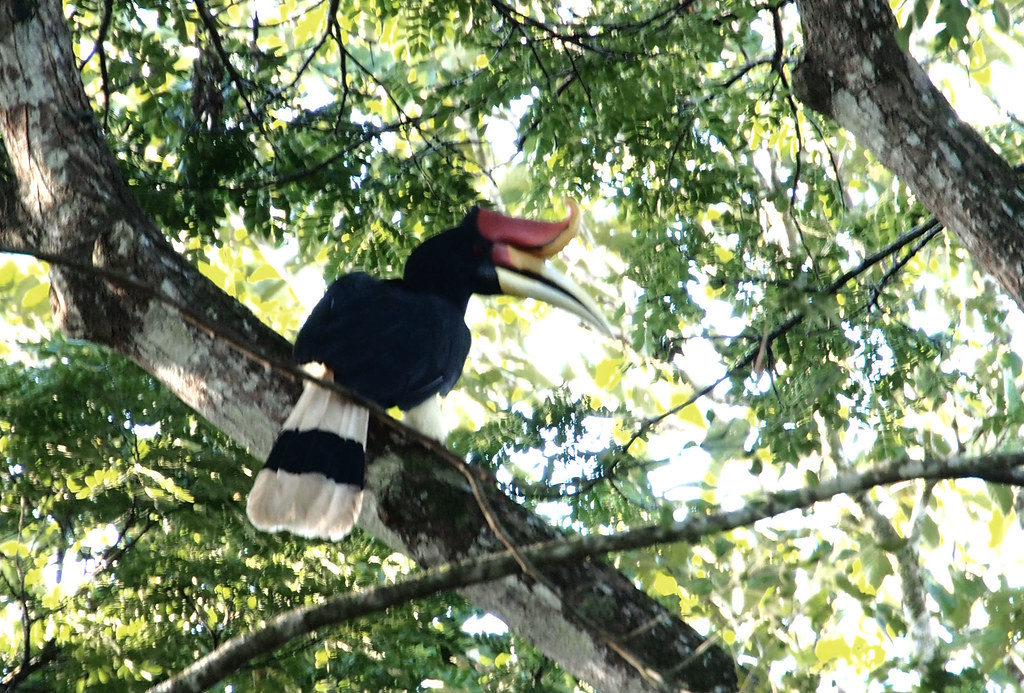 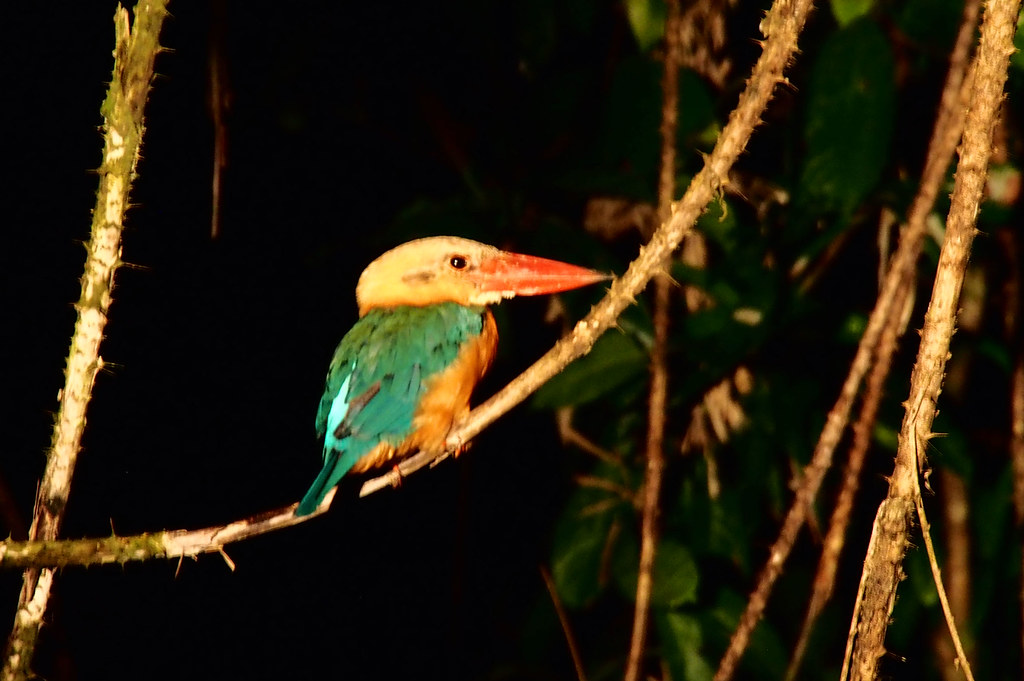 We also cruised to another wildlife sanctuary called Tabin Wildlife Resort which was surrounded by the much maligned palm oil plantations, but again it was a bit lame from a wildlife point of view. 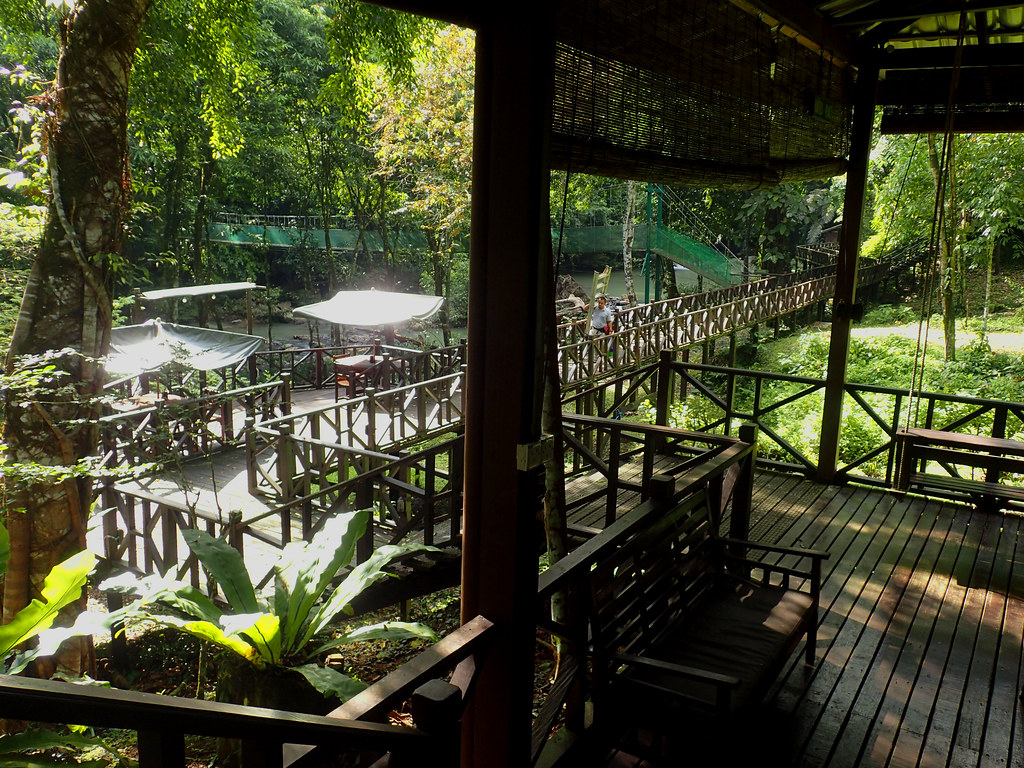 So anyways we have enjoyed Borneo but we seemed to have heard too many stories about people having much better wildlife experiences than us, so when we come back one day… which we will… we’ll do it ourselves rather than relying on tour companies.

We have managed to cure our jungle fever with pigging out and shopping in Kota Kinabalu for a couple of days now, so we are going to see if we can get some buzz going in Brunei enough to write a blog about. 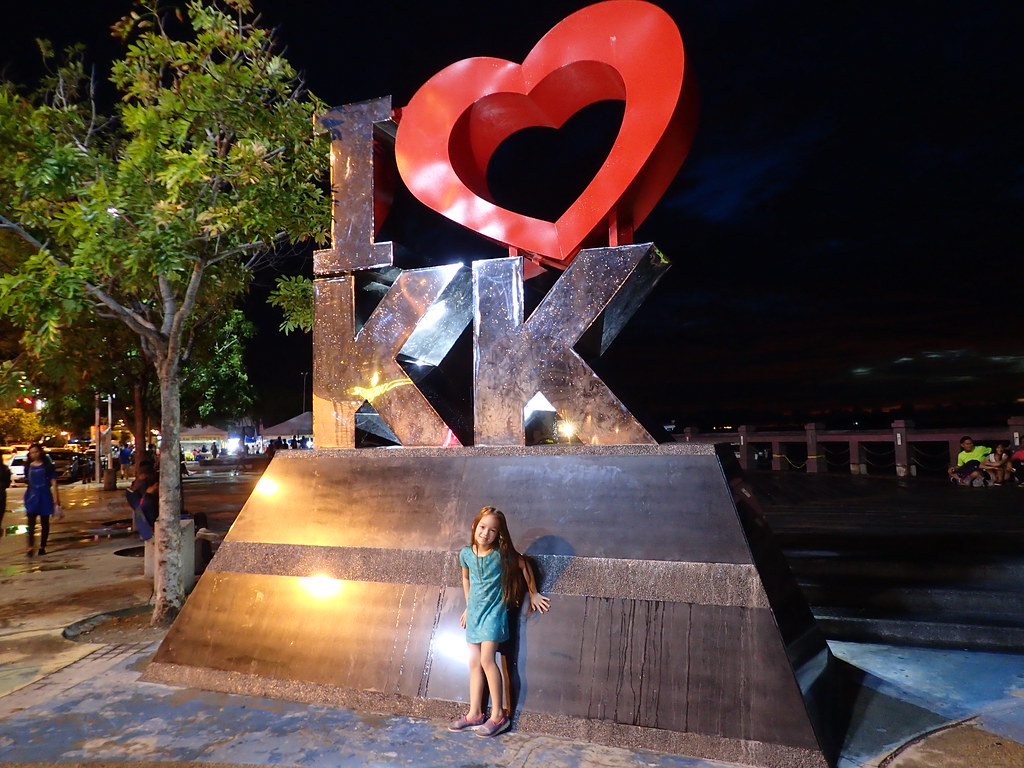 Photos of all our Borneo creepy crawlies are at this link. And the youTube clip is at this link.
Love and monkey germs