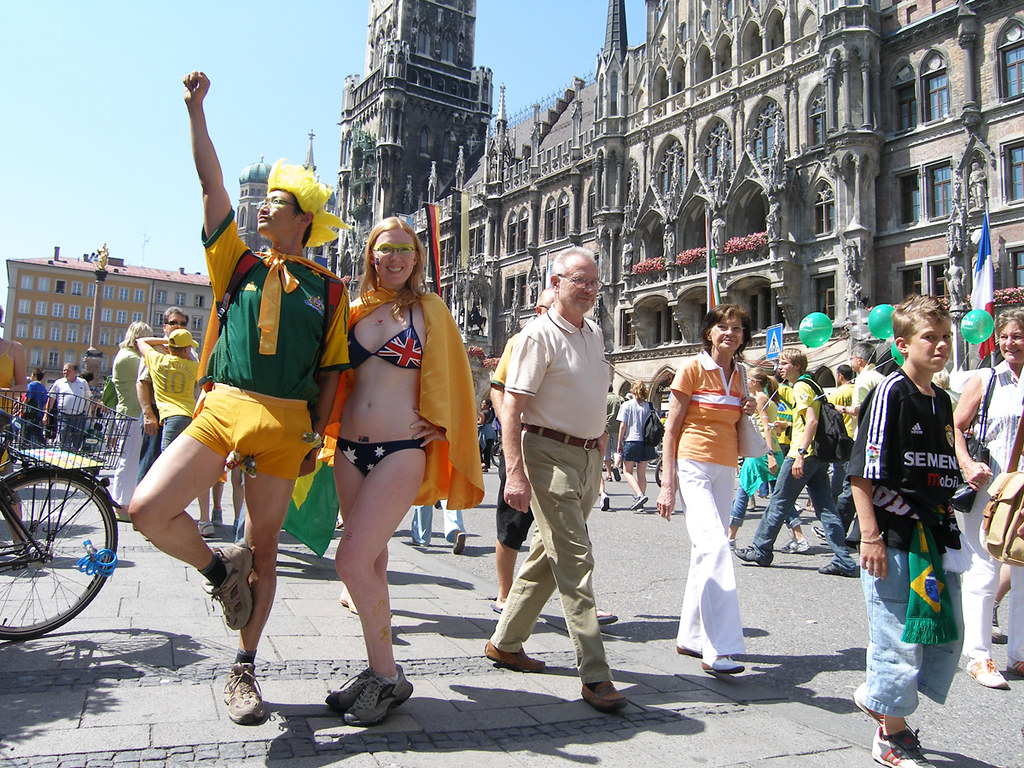 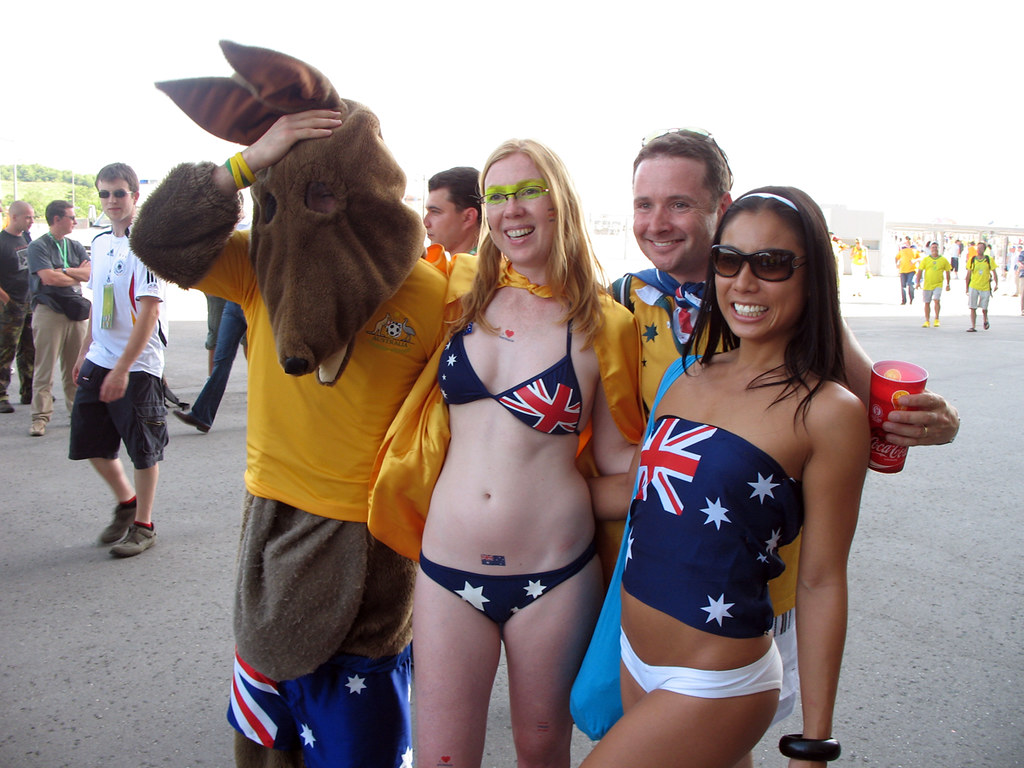 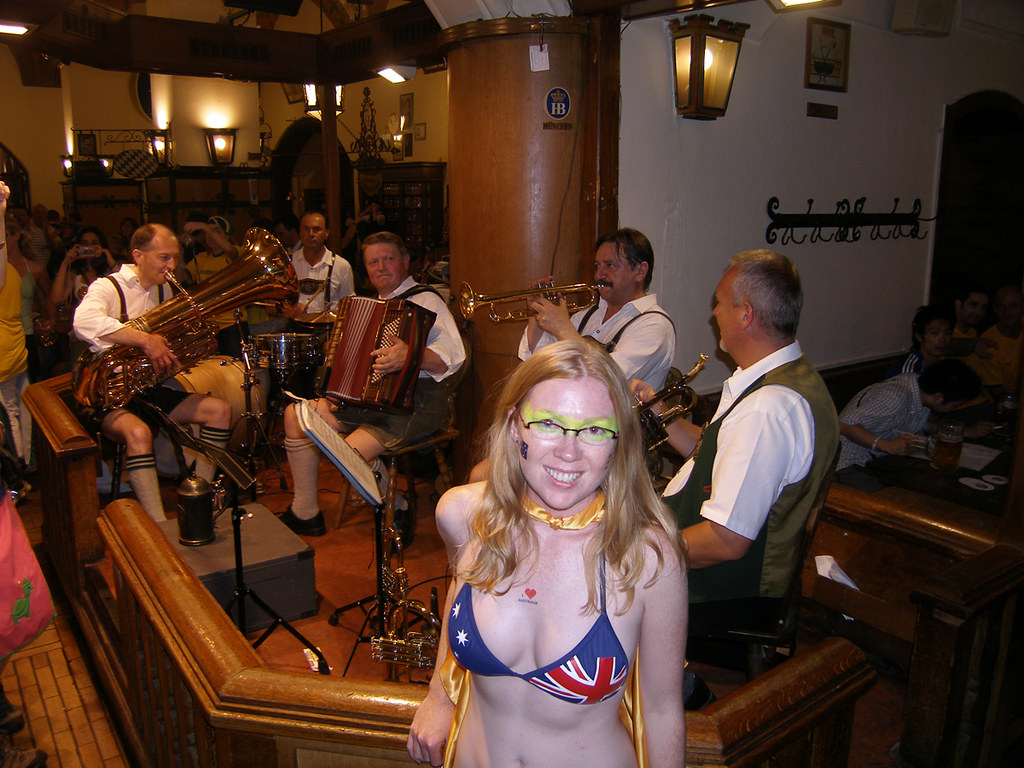 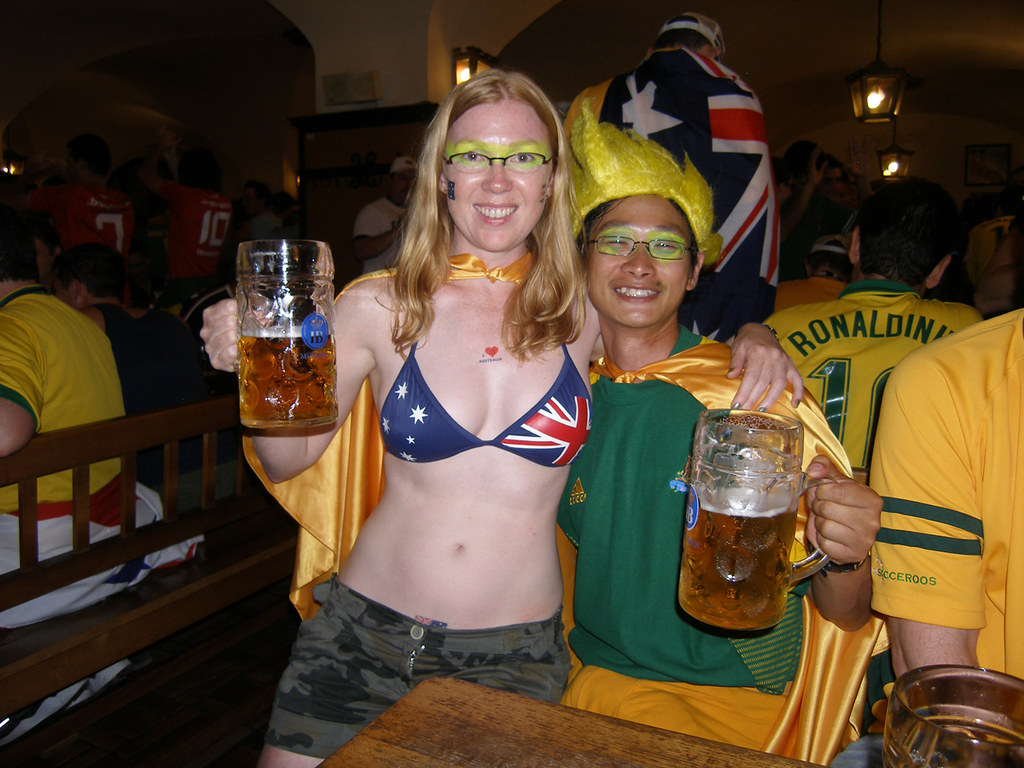 Guten Tag and GO YOU GOOD AUSSIE!!! to all Soccer Yobbos and Football Schmooligans out there…

Well, we are currently on a train from Frankfurt to Amsterdam and HOLY CRAP we have had SO much fun in Germany with the World Cup over this last week, that I almost wasn’t going to write a blog and just send you to the photos since words can not describe how much of a PISS FUNNY time we’ve had!!!

Now, normally at home we aren’t big sports fans at all, but Australia hasn’t been in the World Cup for 32 years, so when our friend Kendall offered to get us tickets we were DEFINITELY keen.

In fact, we figured that the World Cup is such a spectacle that we would have just been happy watching Togo Vs Uzbekistan… So we TOTALLY almost blew our load when she emailed us to say that we had scored tickets to the AUSTRALIA VS BRAZIL match in Munich!!!!

…OK, that analogy had nothing to do with football or travel, but just goes to show how low I will go for a giggle…

Now, Kendall is a girl who we met in South America and traveled to Egypt with 8 years ago, and although she has been to 50 countries, she has also gone the BIFFO in more countries than anyone we know!!!

She totally makes our adventures look like Sesame Street since her AWESOME stories include stealing a taxi in Bangkok, punching up a taxi guy in a China police station, beating up a hostel owner in Vietnam and having the Burmese army looking for her in rebel territories…

So although we were wondering what sort of shit she would get us into this time, we NEVER expected her to suggest that we go as superheroes!!! 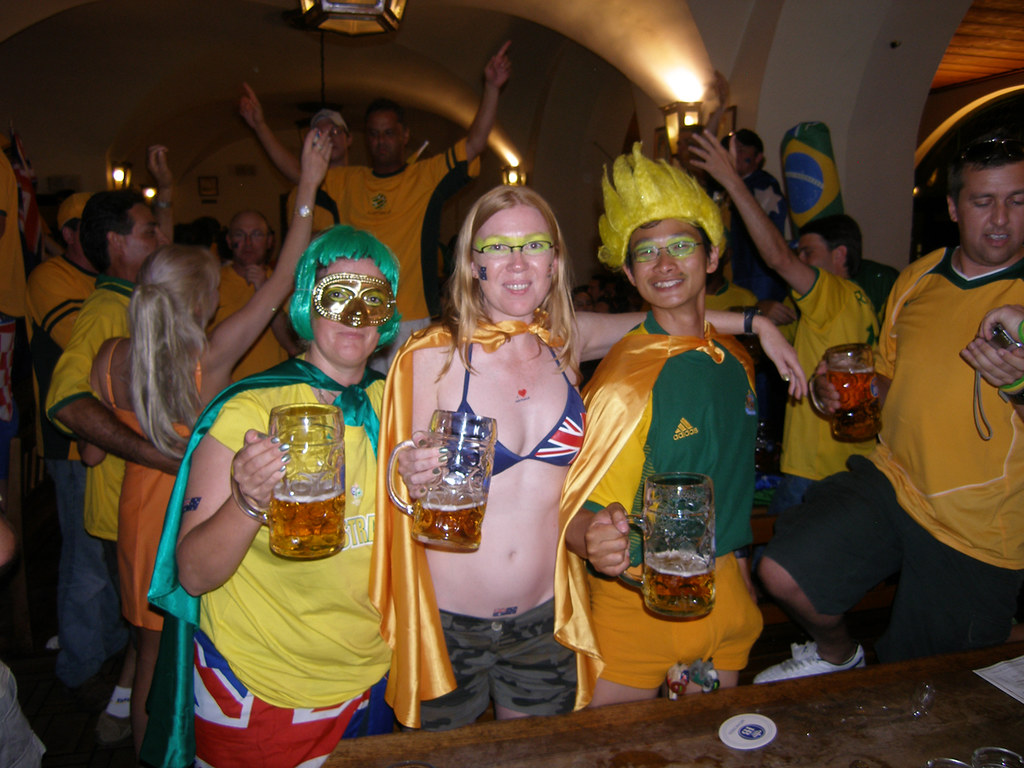 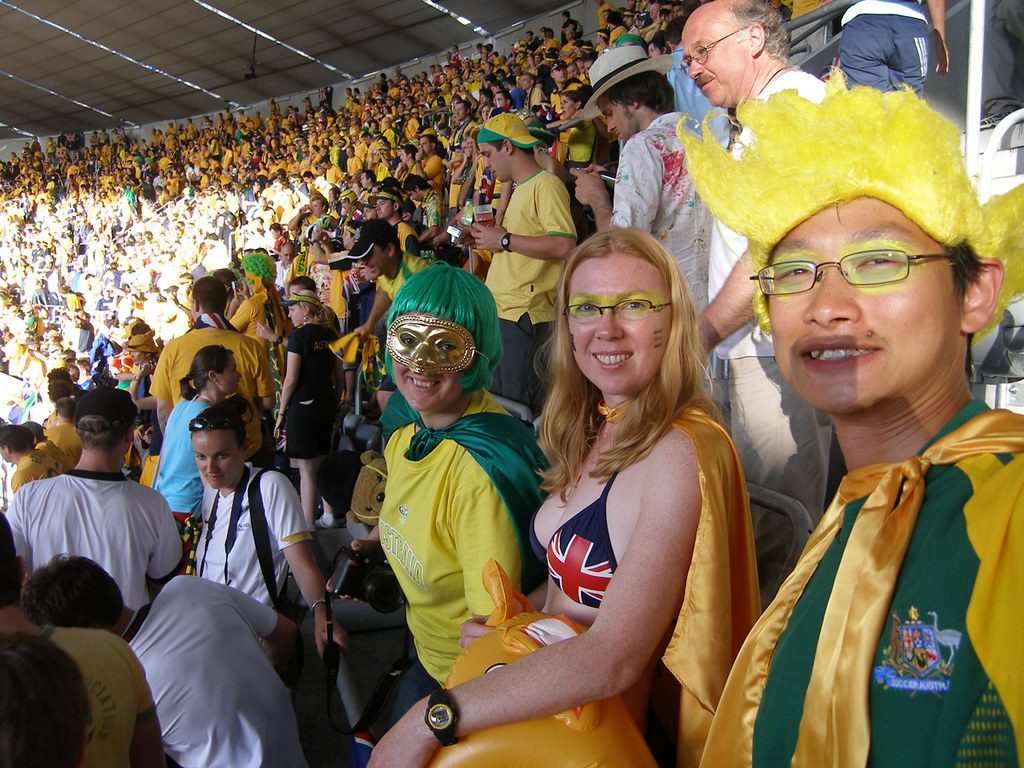 Now, Avril and Kendall were fine with their costumes, especially since Avril had her Aussie bikini. But so far on this world trip, I have had so many superhero identities that I was worried about becoming TOTALLY schizophrenic, so I wasn’t sure whether I’d be up to it…

However, luckily we were staying with my friend Mick the Hermie Germie and after warming us up with 2 hilarious days of beer, sausages and silly soccer games he produced a magical pair of yellow SUPER PANTS!!!! 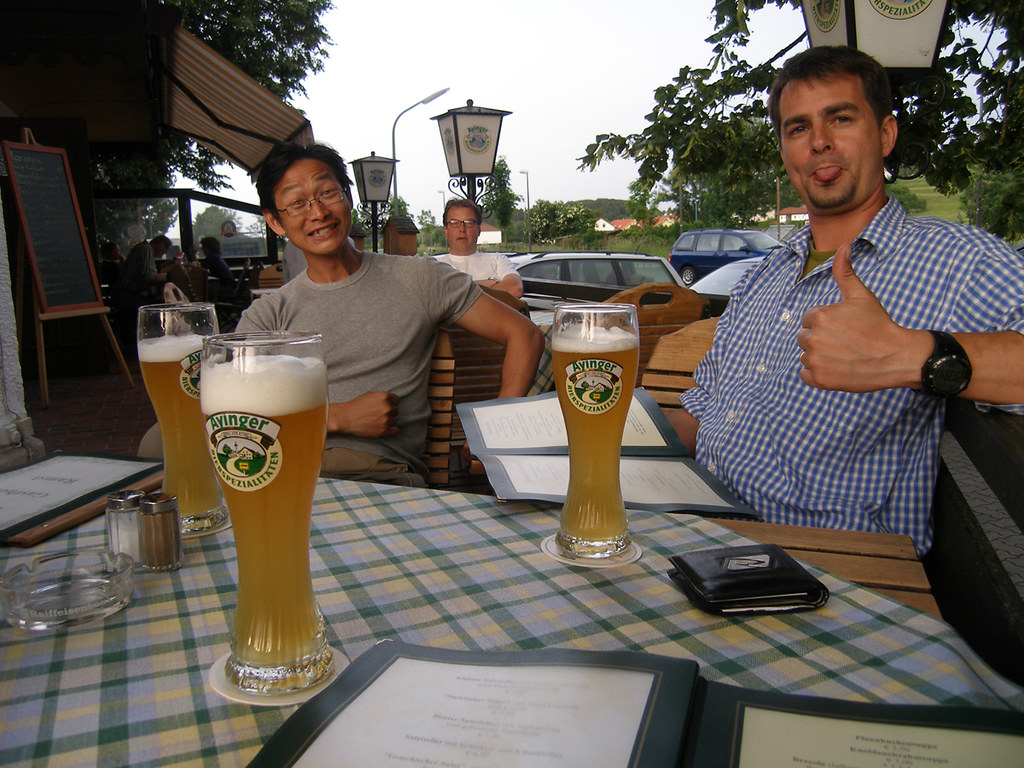 Man… these pants were TOTALLY SUPER but because I had to become even more powerful to rip those Brazilians a new Brazilian, I ended up rolling some clothes into a large schlong and then stuffing it down my crotch and THEN I hung koalas all over it!!! 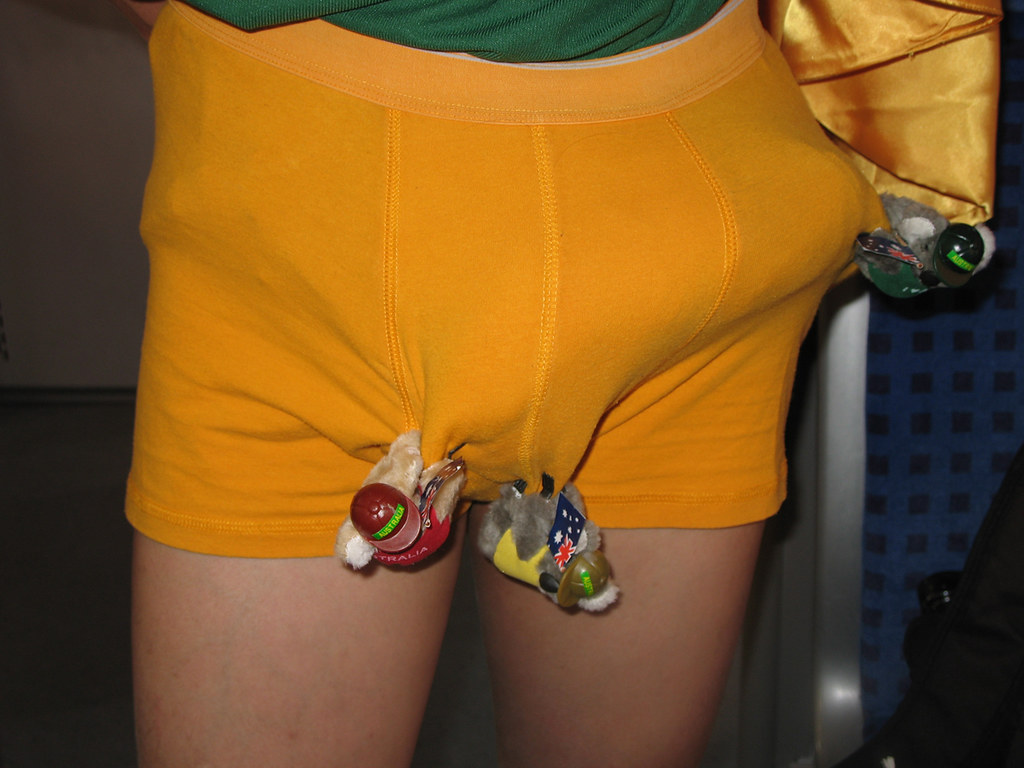 HOLY COW dudes… the large schlong and yellow pants were SO powerful that I definitely developed powers far beyond those of mortal men and all of a sudden I was faster than a speeding mullet and able to leap cracks in the sidewalk in a single bound!!! 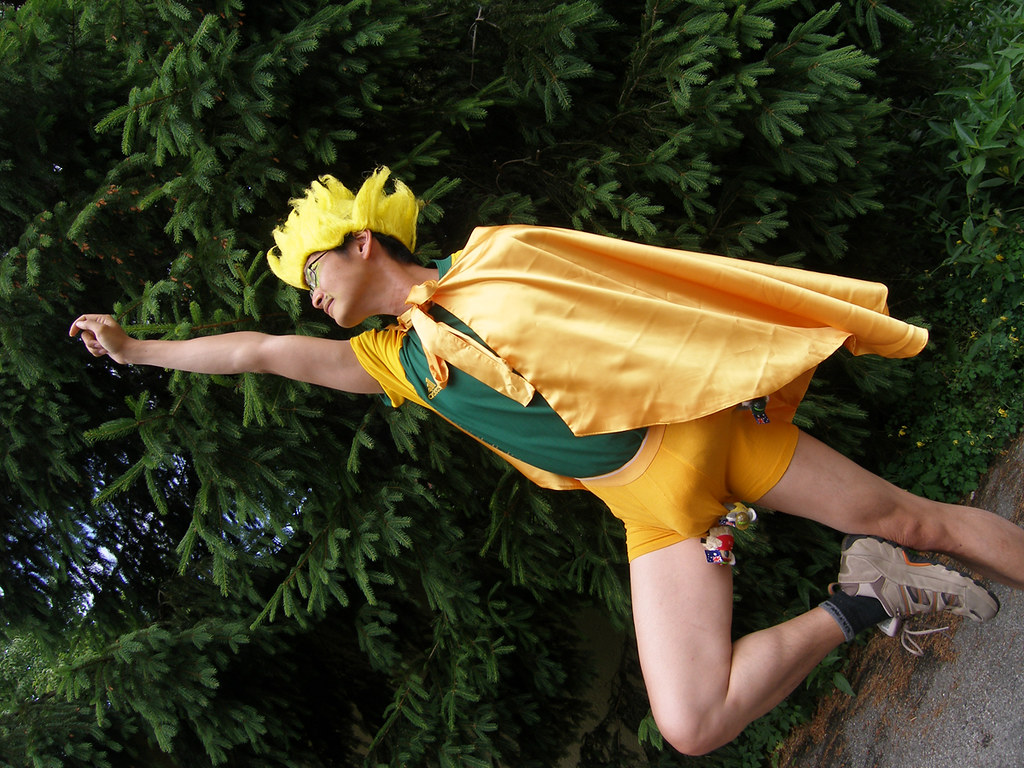 However, as powerful as I was, Avril completely stole the show in her Aussie bikini!!! 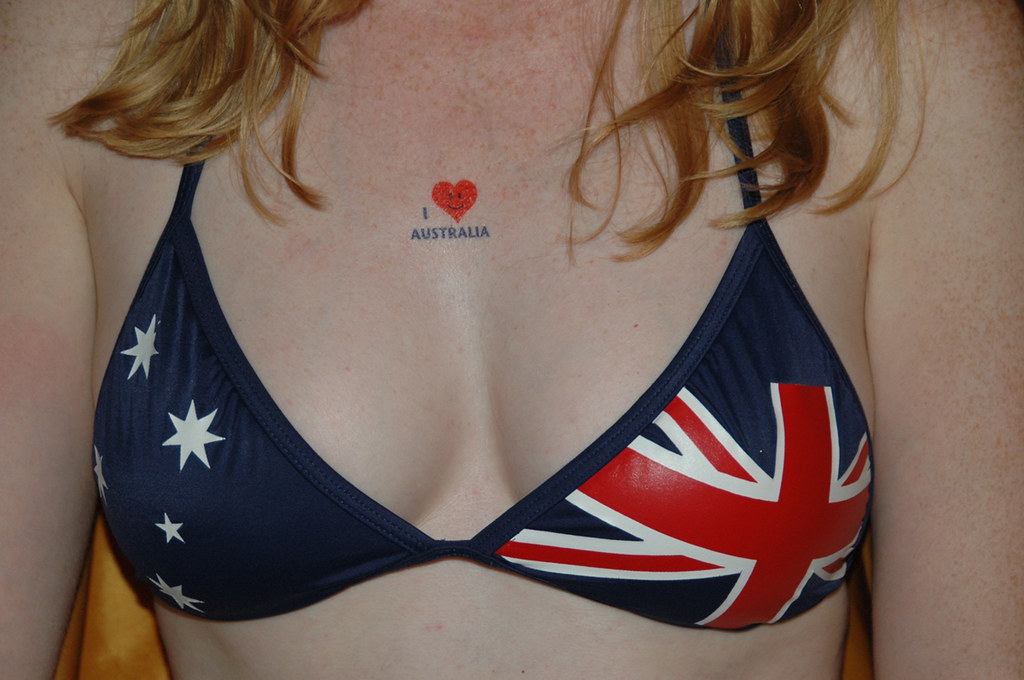 Avril ACTUALLY walked around Marienplatz plaza in the centre of Munich in just a bikini and although the plaza wasn’t huge, it actually took us one and a half hours to get around since everyone kept stopping to take photos of her!!! 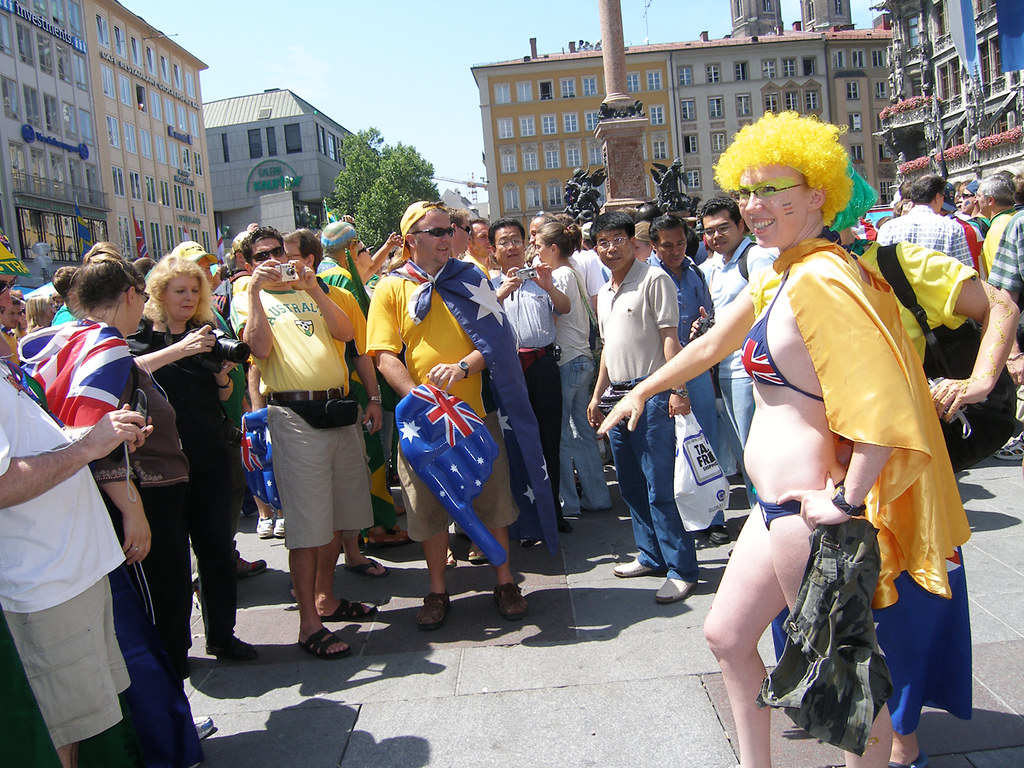 It was quite amazing as the Brazilians girls who are normally well known for their skimpy clothing were all actually dressed very conservatively. And Avril and a few other Aussie girls we came across actually OUT-SKIMPED the Brazilians by a long way!!! 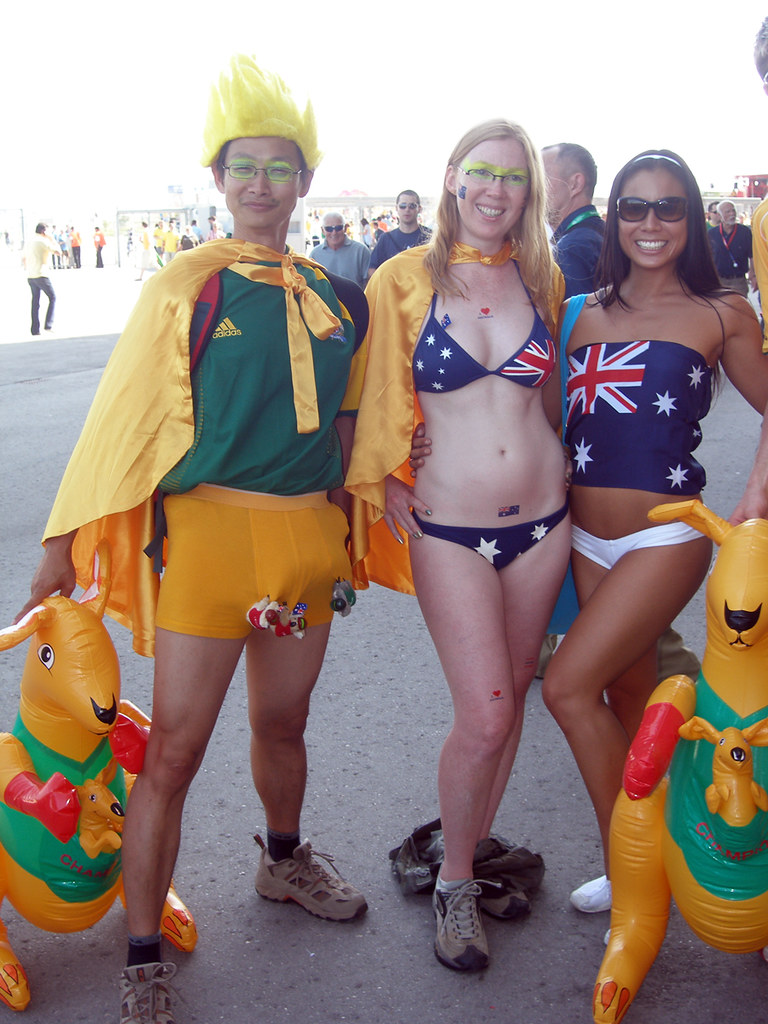 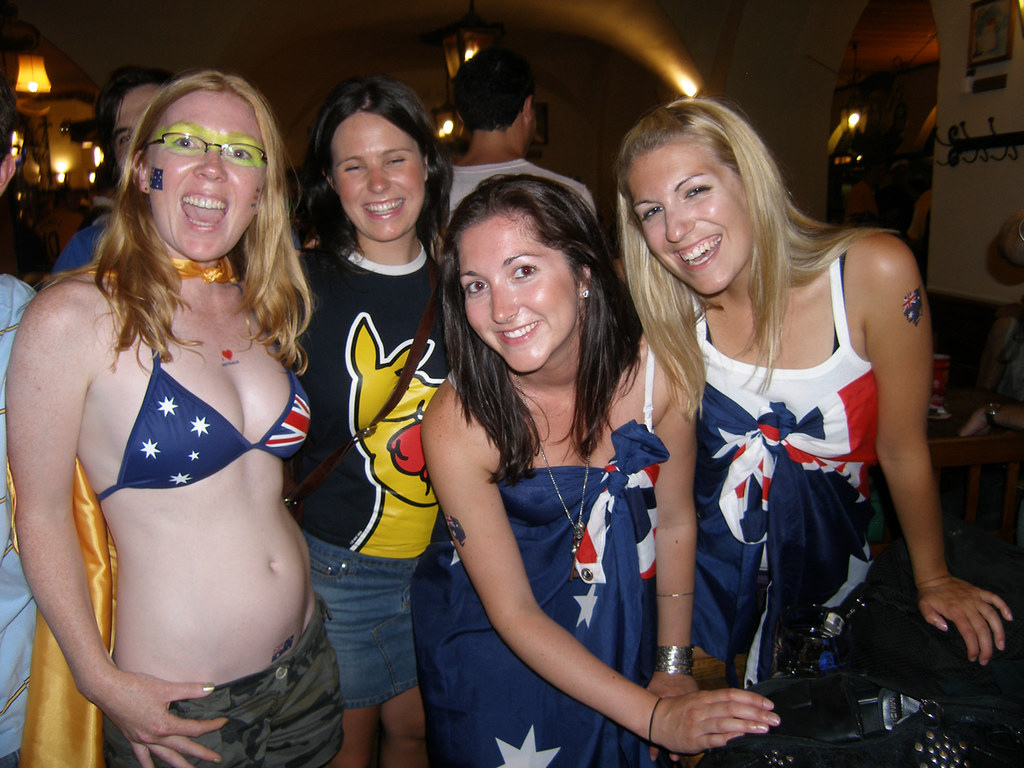 In fact, people also took heaps of pictures of me too, but they seemed to be only fascinated with my koala filled schlong as you’ll see in the photos… Man… It was almost like they had never seen an Asian with a large schlong before… Oh… hang on… neither have I… 🙁 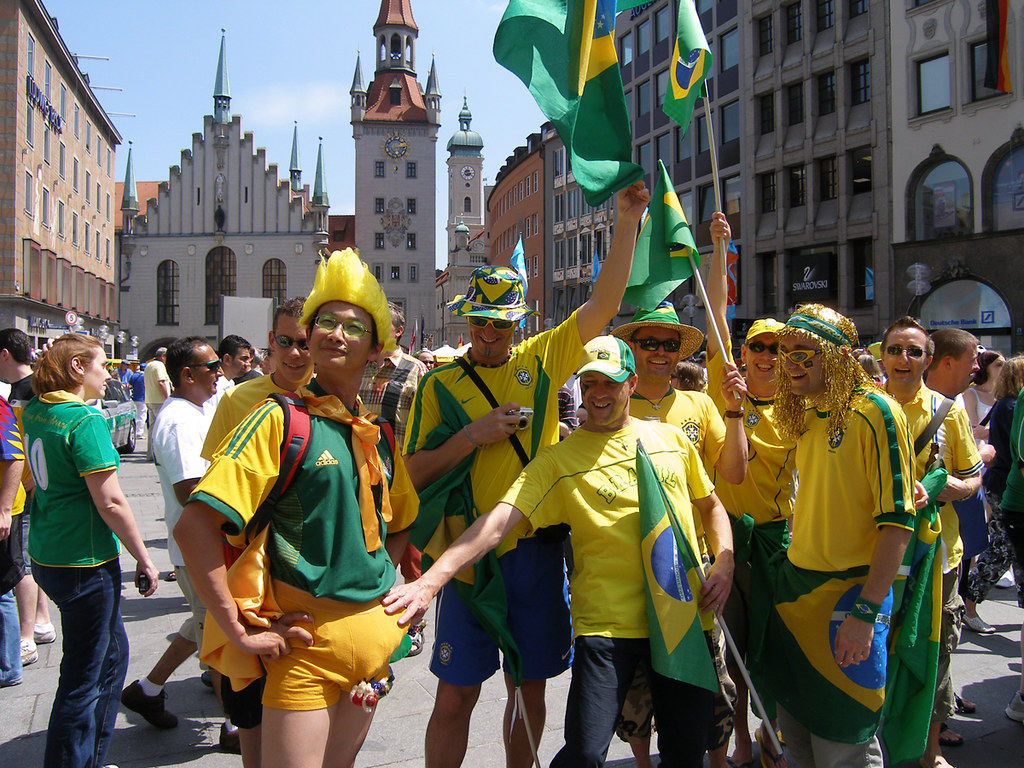 In anycase, the attention continued all the way into the stadium and Avril ended up getting interviewed by China TV and a Chilean TV station, but we just couldn’t find any dumbarse Aussie TV stations to document our superheroics. 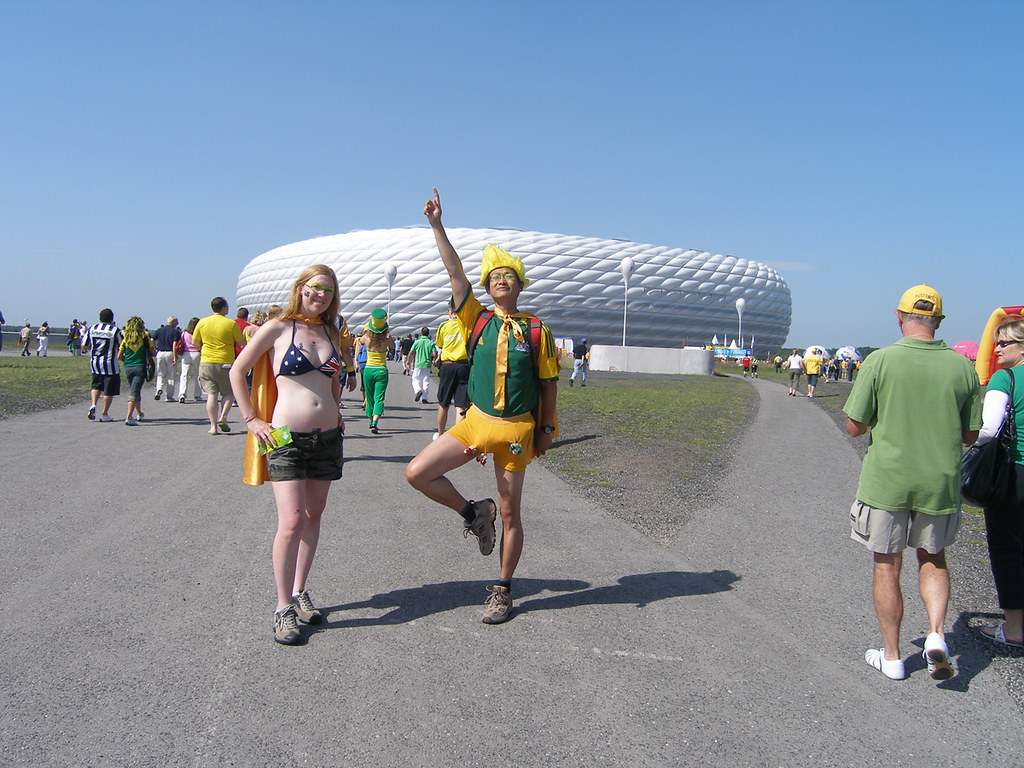 And somewhere in the middle of all of that, Australia played brilliantly against Brazil but unfortunately we still lost 2:0.

The Allianz stadium was AWESOME though and was filled to capacity with 66,000 people and the crowd atmosphere was simply roof shaking… And of course after the game, the Hofbrauhaus beer garden was literally taken over by Aussies singing every bad war chant ever created… 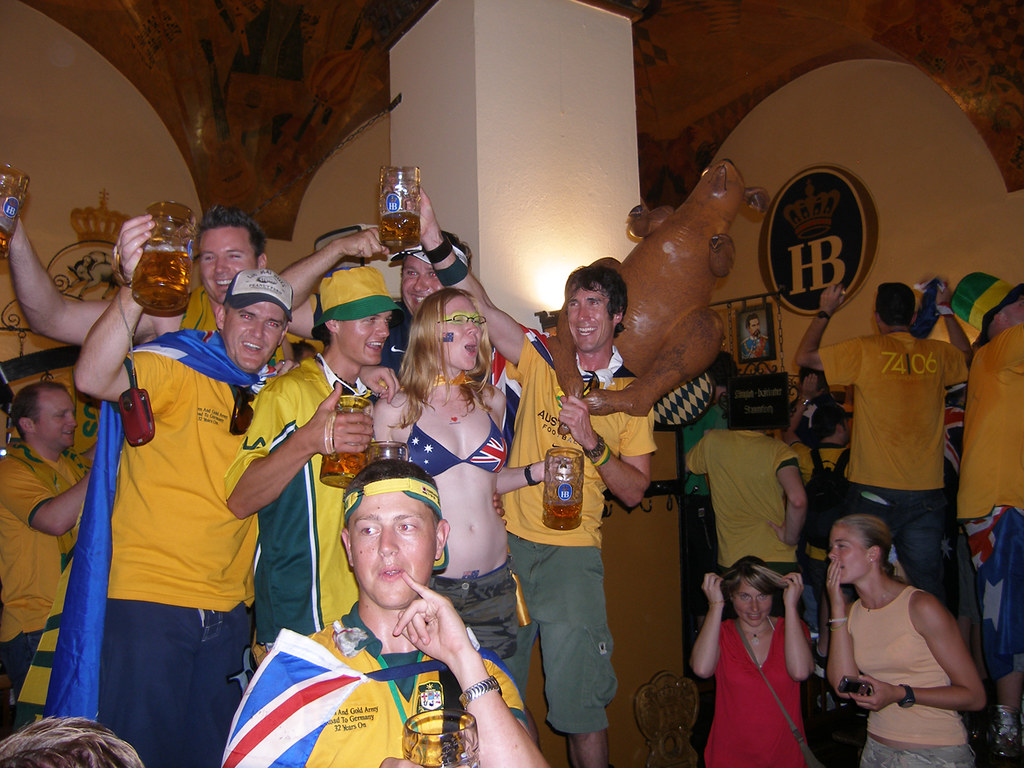 Anyhows, somehow we also managed the time to visit our friend Axel in Traunstein where Pope Benedict grew up when he was Pope Boy Jnr and we also checked out Salzburg in Austria to check out some ice caves although we really didn’t have enough time to ROCK ME AMADAEUS… 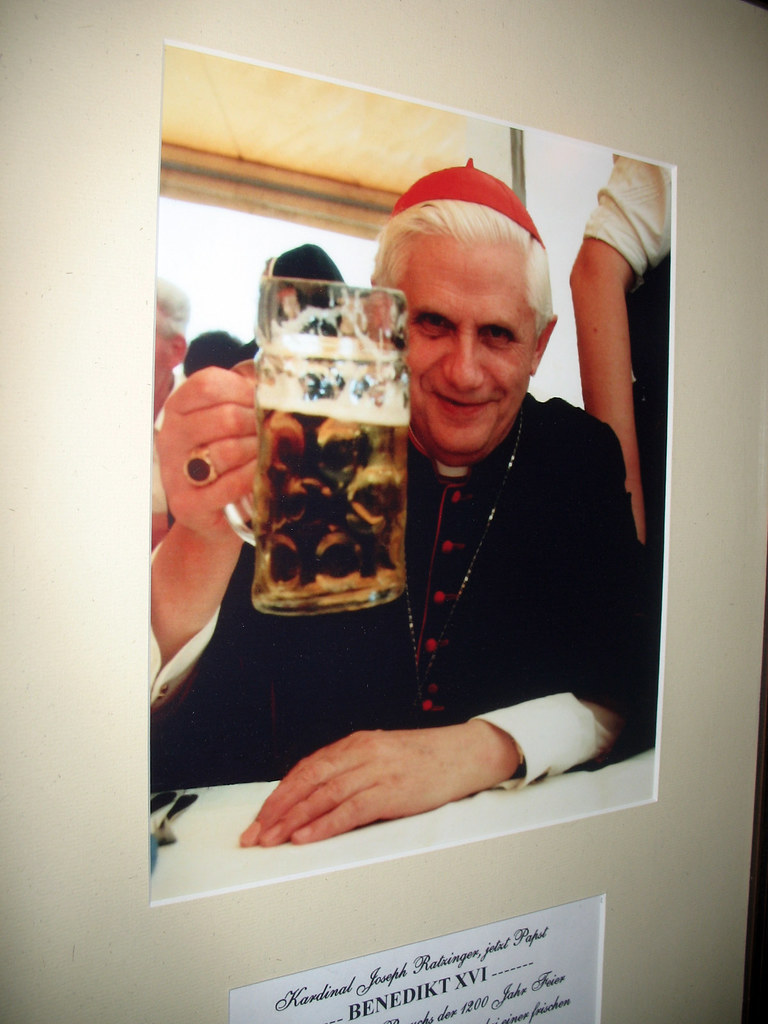 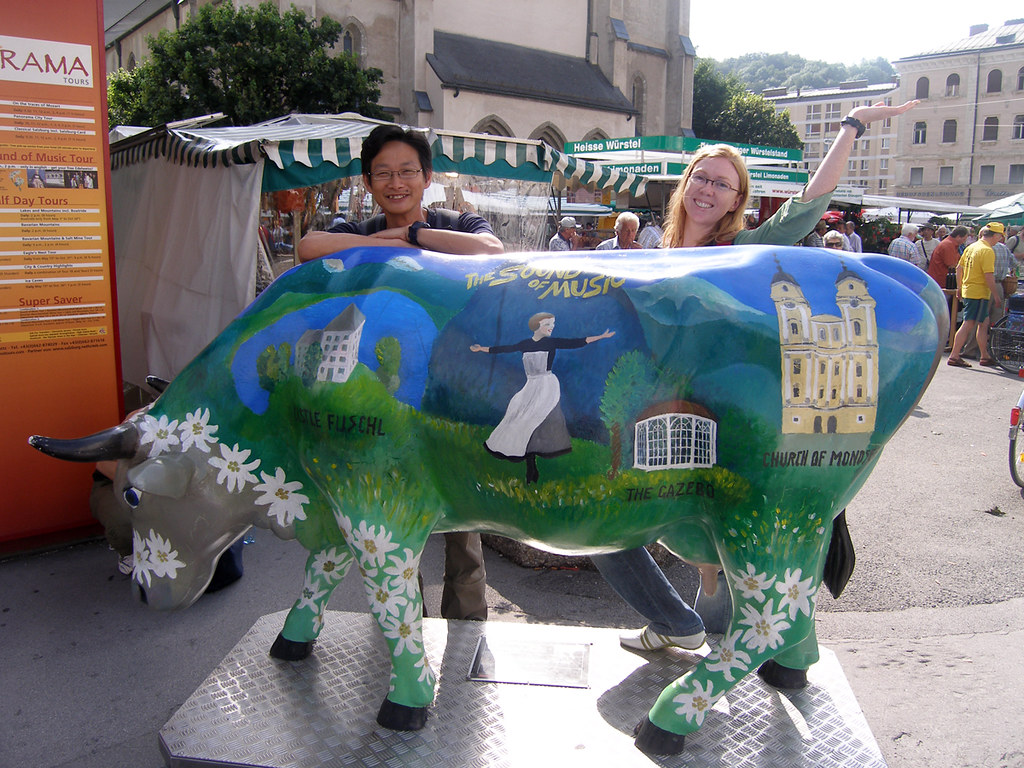 And we also Rhine-stoned cowboyed around the Rhine with our new friends Peggy and Ralph and Avril managed to show off her bikini superpowers again in Frankfurt out of a sunroof in about 5 degrees celsius after we got through against Croatia. 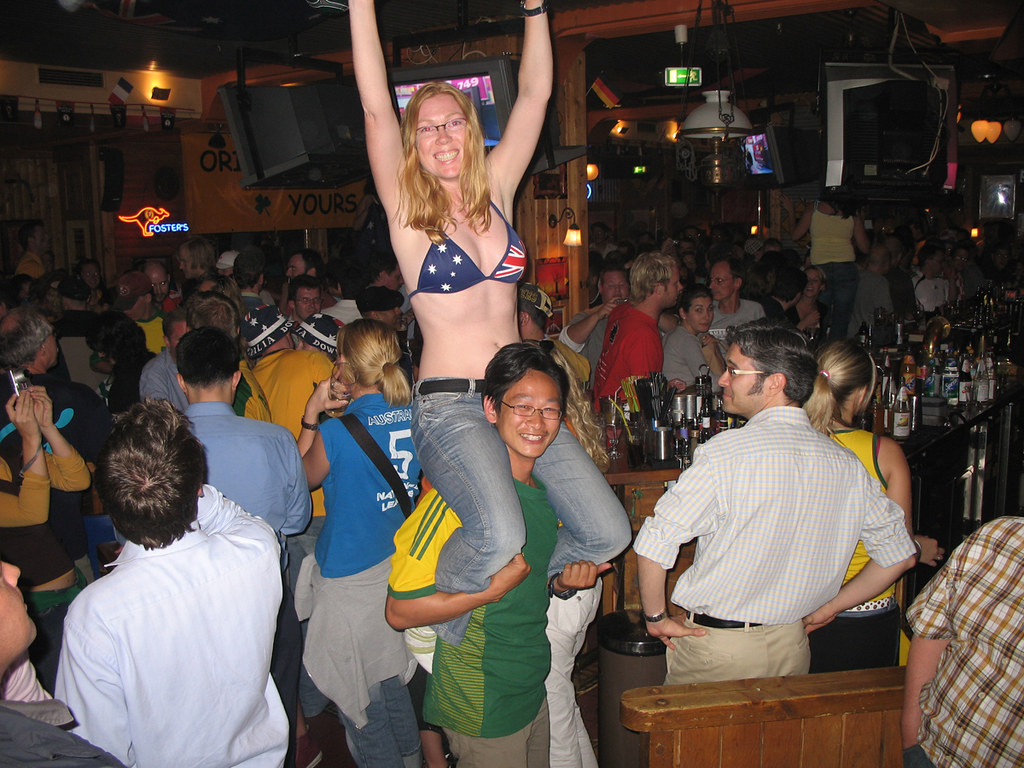 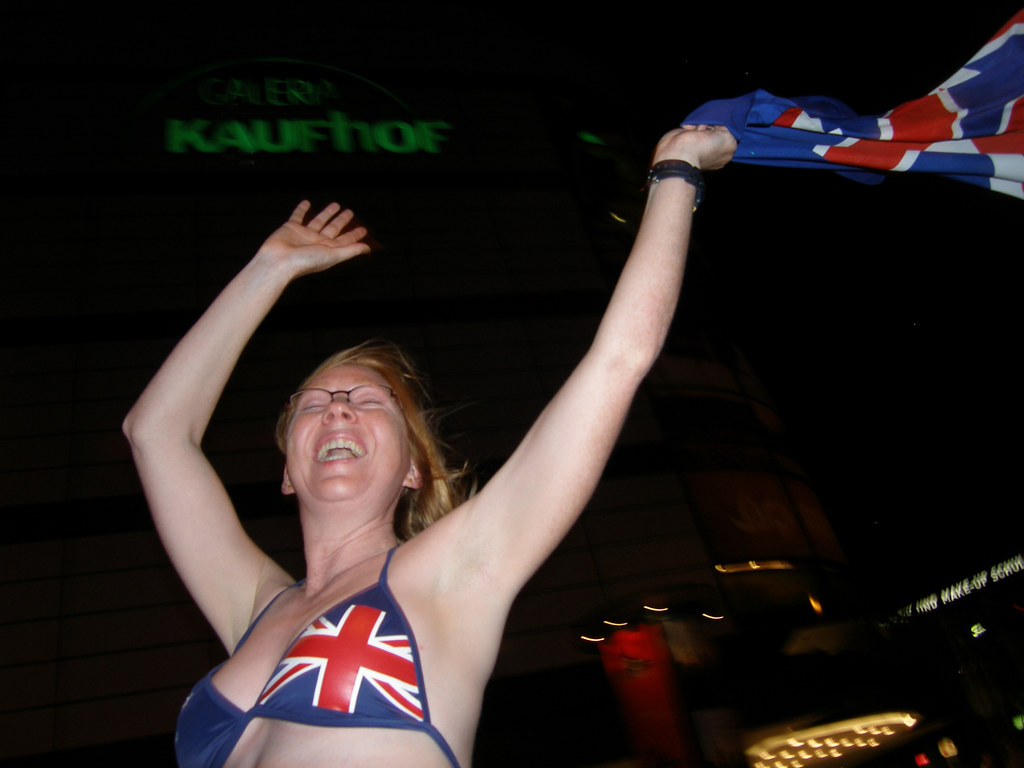 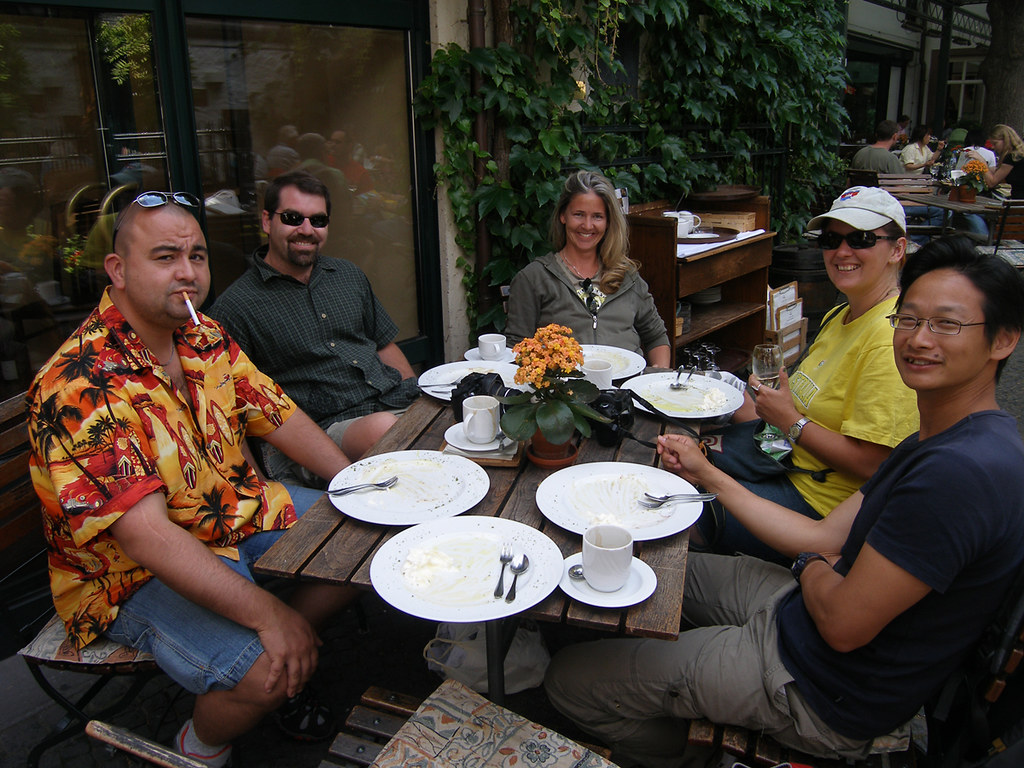 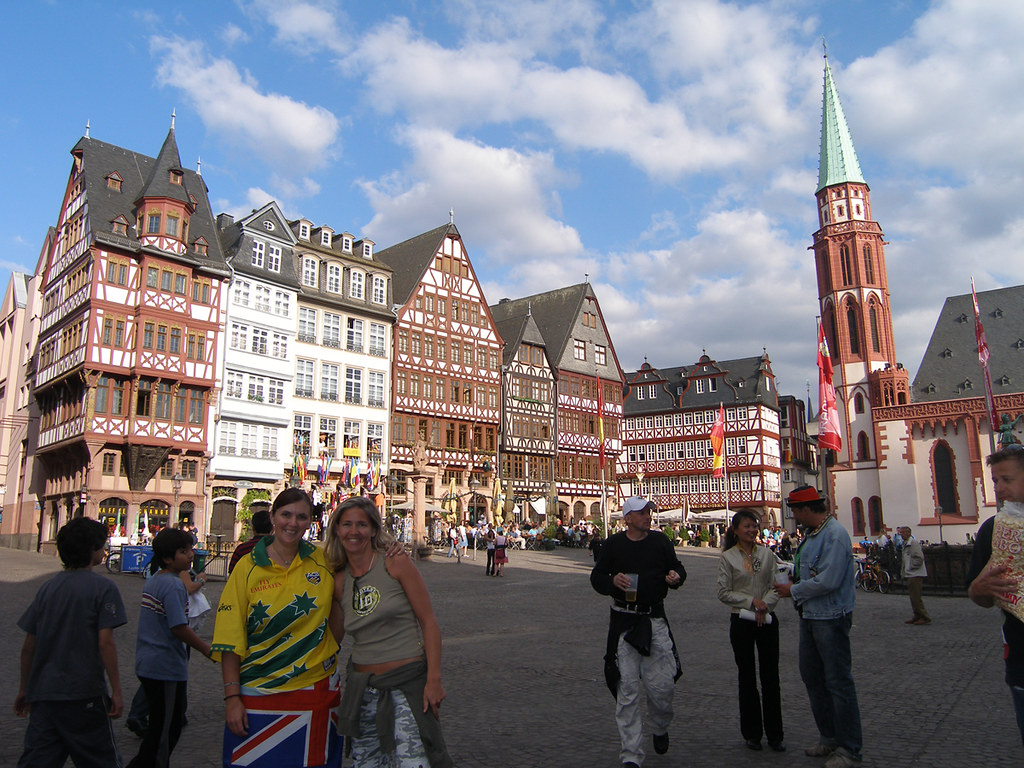 Anyways, we’re now on our way to meet up with Darlene and Allan in Hamsterdam and then we are off to Berlin for a week after that.

Lots of love and schlong happiness

PS OK you know you want to see the photos of the bikini and the schlong so here is the link, and there are also some Austria photos at this link too

PPS Thanks Mick the Hermie Germie and Ela, Ralph, Peggy and Andre and Axel for letting us crash at your houses and for driving us around, and thanks for the SUPER PANTS Mick!!!

PPPS And thanks Strewth Ruth Kendall for organising the tickets. We had a HUGE time!!! You ROCK!!!