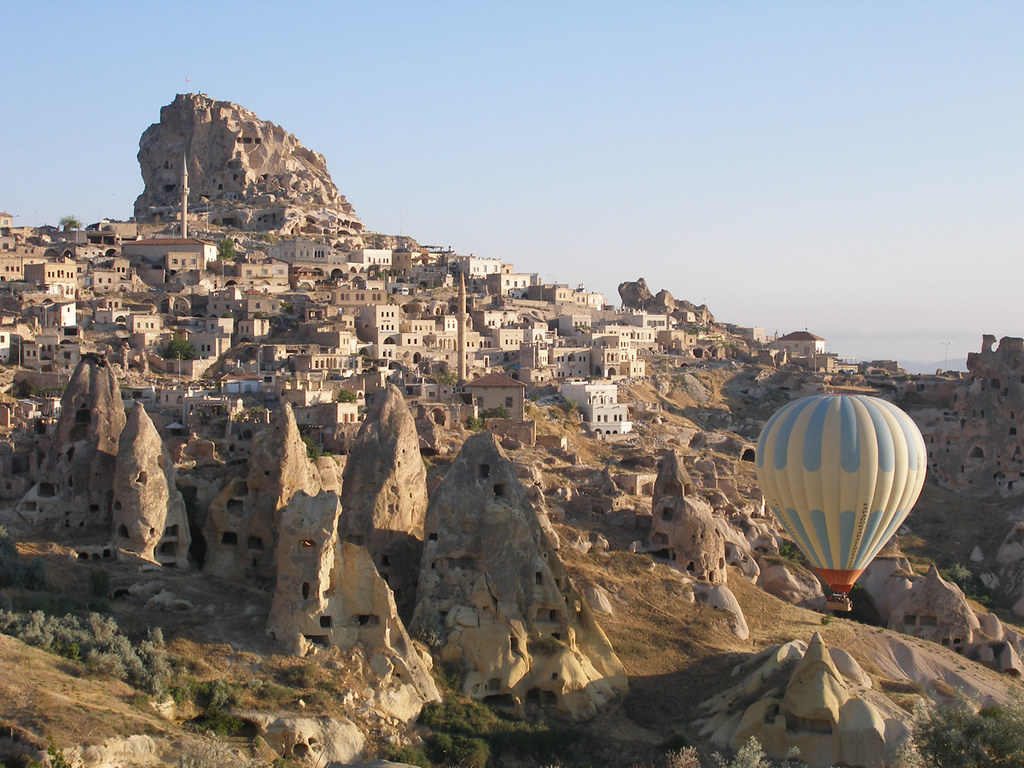 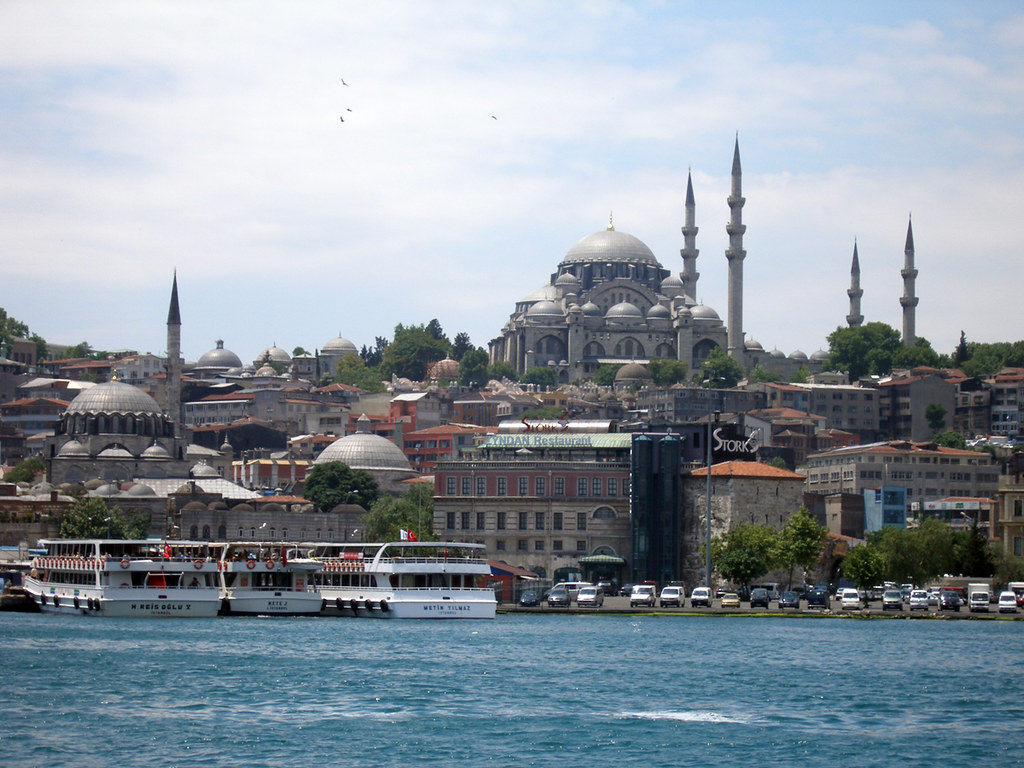 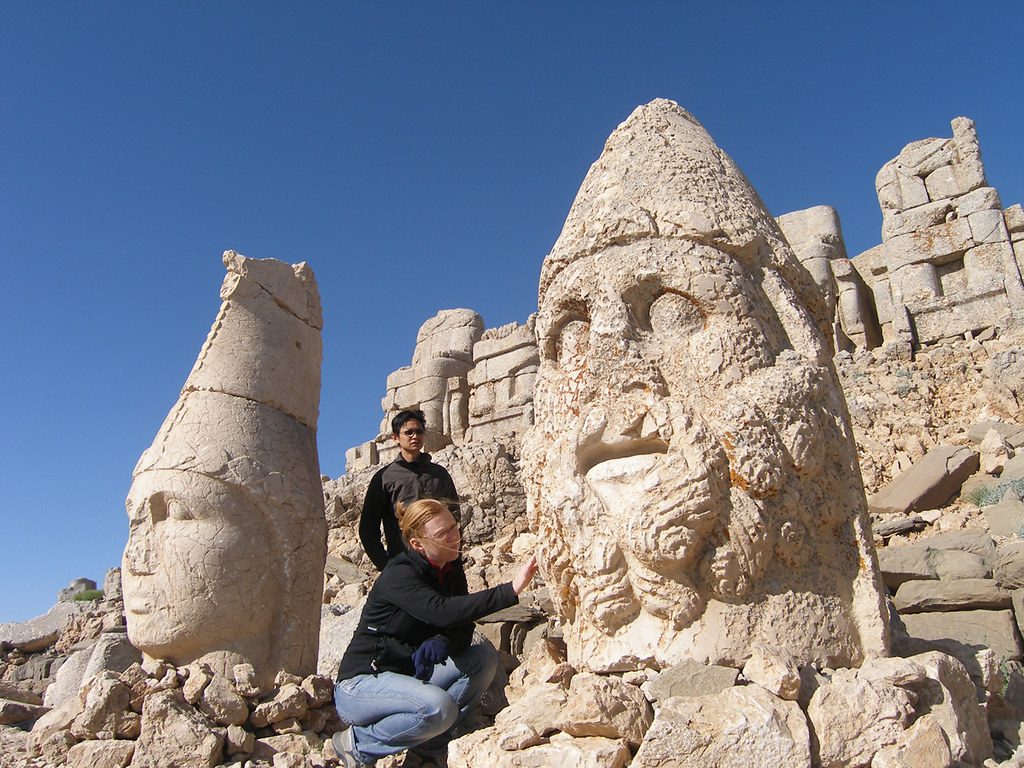 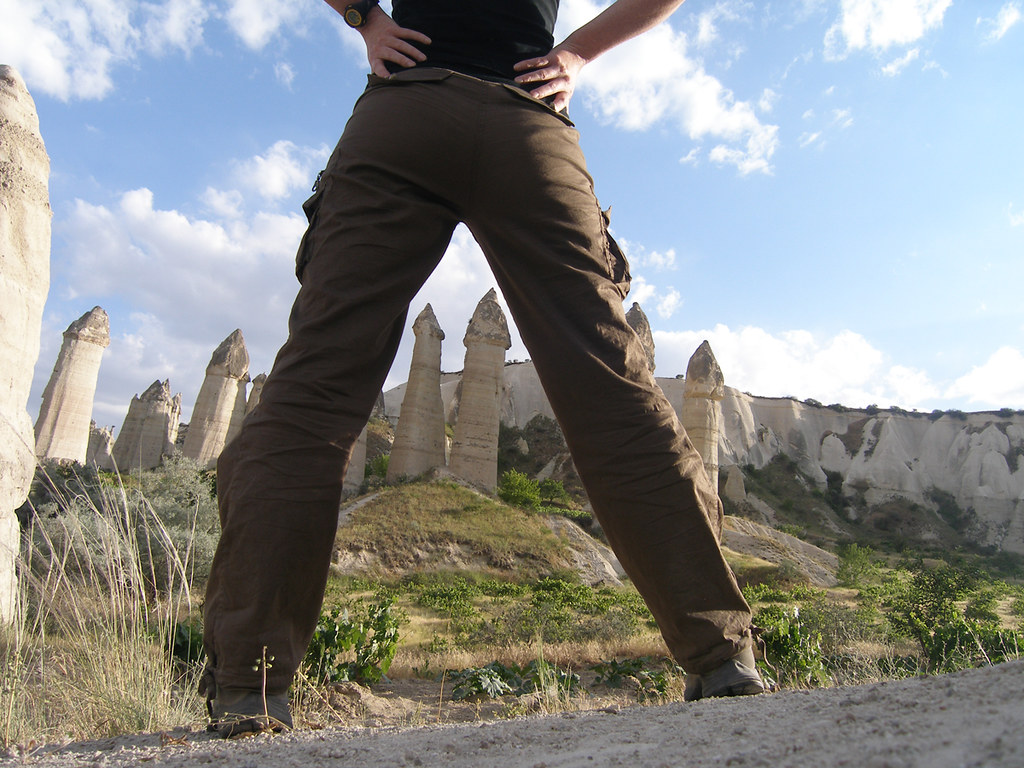 Merhaba to all you Turks, Turkettes and other furry Turkeys

Well, we are currently sitting in our hotel on Taksim Square in Istanbul after 2 weeks bumming around Turkey and today I discovered that a great EVIL lurks amongst us.

This morning after finishing our fantastic Turkish cooking class, we decided to go for a Hamam (traditional Turkish bath) in a local 400 year old Hamami. 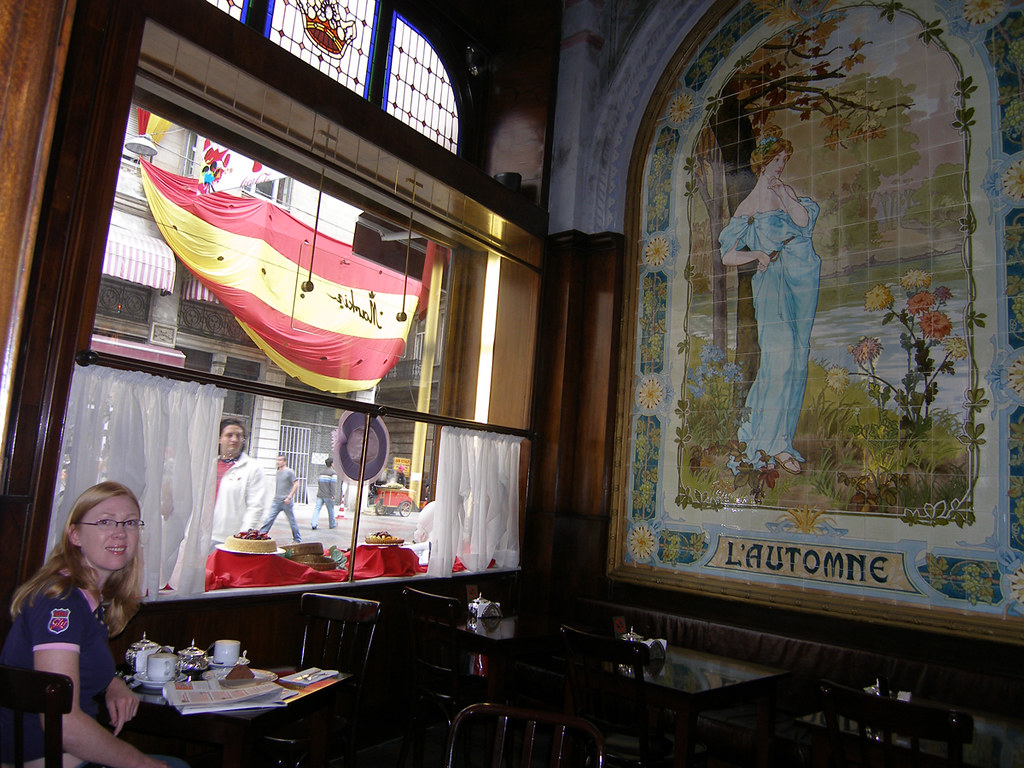 Now for those of you who haven’t had a Hamam, the basic idea is that you sit in a massive steam room on a marble slab whilst a heavy handed Turkish man or woman soaps you down and then scrubs the shit out of your skin with a wire hard loofa and then tries to crack all the bones in your body.

Well, we had met an American girl at our class who said that she thought the whole experience was a bit scary and humiliating as they kept stopping to tell her how filthy she was. And originally I seriously thought she was a bit of a pussy… But man… I soon found out how WRONG I was!!!

Avril and I got split up into separate baths and so I walked into this stifling 45 degree room with a massive domed roof and lay down in just a towel with about 10 other half naked men on the massive marble circular slab.

Initially I tried to remain cool, calm and relaxed, but I found it pretty hard since there were 3 Indian guys getting their scrubbing behind me and actually whimpering in pain.

I did try to ignore them at first, by concentrating on the fantastic 400 year old Ottoman architecture on the roof… But all of a sudden, a loud slapping filled the room followed by painful groaning and I looked up to see a fat Italian dude next to me getting LITERALLY slapped and pummeled by this skinny Turkish dude wearing only a red and white tea towel! 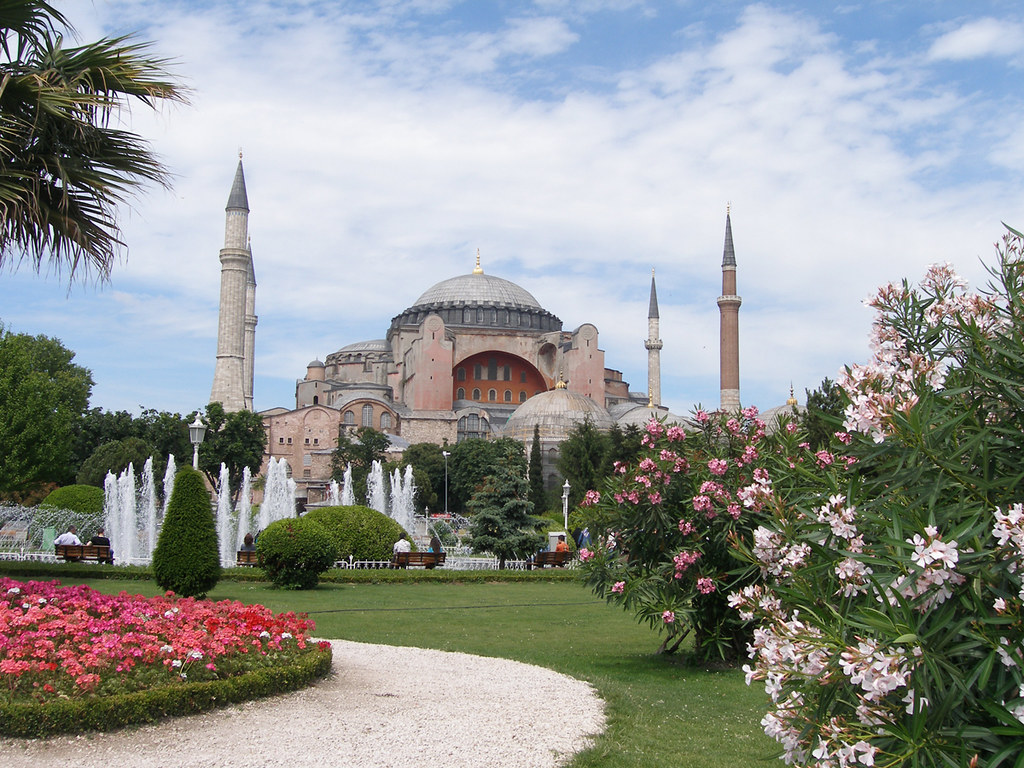 Man, this fat Italian dude was red all over from having his skin scrubbed off, and he was breathing really heavily and groaning so much that he actually sounded like he was having a heart attack during his massage. And the Turkish dude who obviously thought he was a whimp just looked at me and rolled his eyes as if to say “what a wimp”, and then decided to slap him and pummel him even harder!

Initially I was worried that I had accidentally strolled into an S&M club, but I did realise that Italians can be very histrionic, so I closed my eyes and tried to ignore him.

But then after a few minutes, I heard one of the most painful cries of PAIN that I have EVER heard and I looked down to see the fat Italian guy lying face down on the floor with the Turkish dude standing with his full weight balanced on one leg, RIGHT on the back of the Italian guy’s thigh.

Not only that, but with his other leg the Turkish guy was trying to crack the fat Italian’s back by repeatedly slamming his heel down on the Italian dude’s spine like he was crushing cockroaches with his heel!!!

HOLY CRAP!!!! That was IT!!! I was officially SCARED!!! I had NEVER seen such a PAINFUL sight in all my years, and the Turkish dude had such a look of PURE EVIL in his eye that I suddenly realised that this dude must be THE ANTICHRIST!!!

MAN… I couldn’t believe it!!! …the FRIGGIN ANTICHRIST had obviously returned to Earth as a Turkish masseuse wearing a teatowel and he was in the same FRIGGIN room as me!!!

I was TOTALLY FREAKING OUT by now, but I prayed and I PRAYED that I wasn’t going to get the antichrist masseuse and fortunately I was SPARED, and I thankfully got a masseuse who was a lot gentler with me…

But anyways, despite surviving an encounter with the ANTICHRIST, the Hamam experience was absolutely fantastic, and our skin is now so soft and smooth that I am sure evil would just slide right off us now!

In fact, Turkey in general has been a FANTASTIC experience and so far we have also done heaps of cool things like checking out the famous ruins of Ephesus and cruising over the sunken underwater Lycian city of Kekova on the Aegean coast. 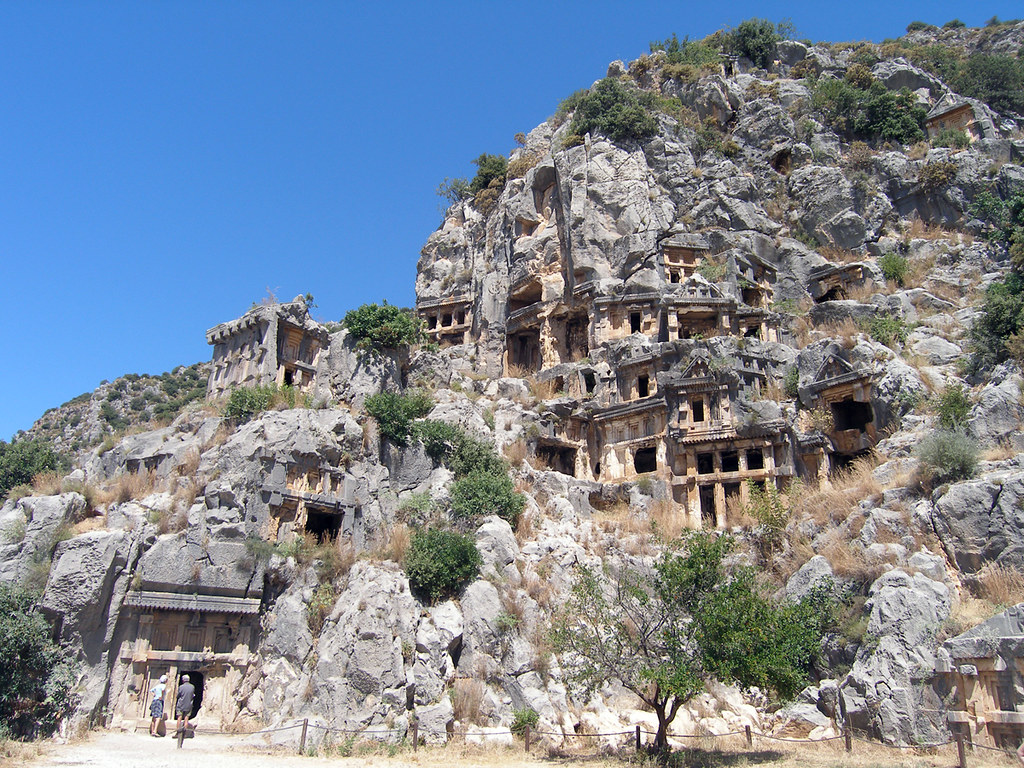 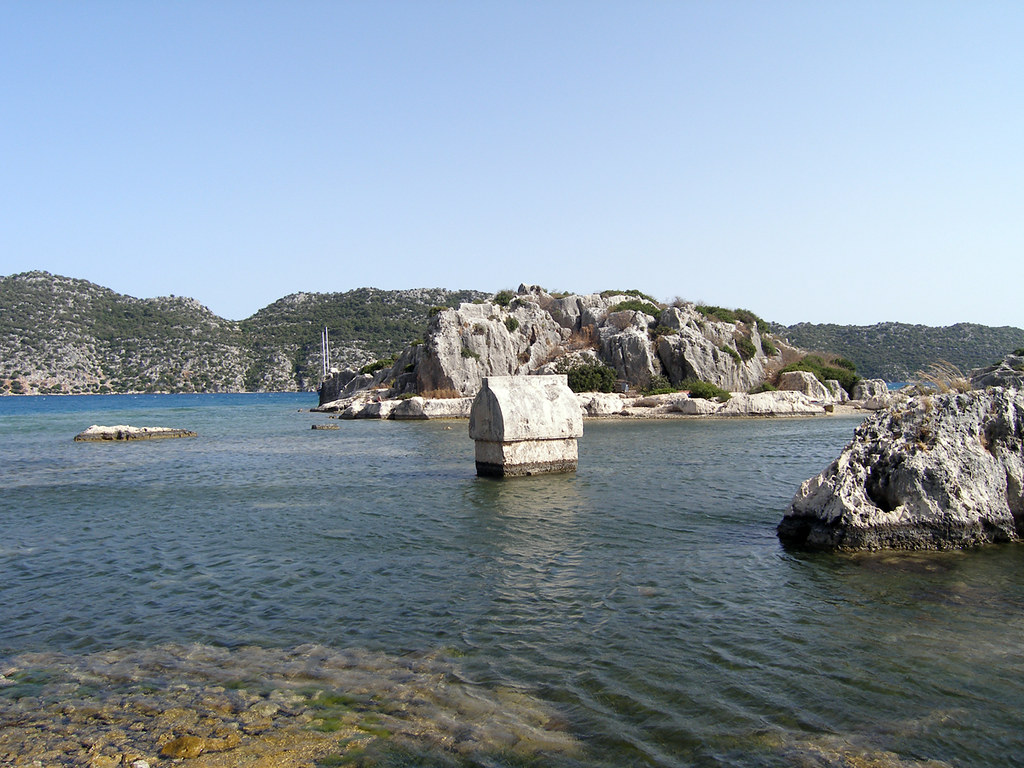 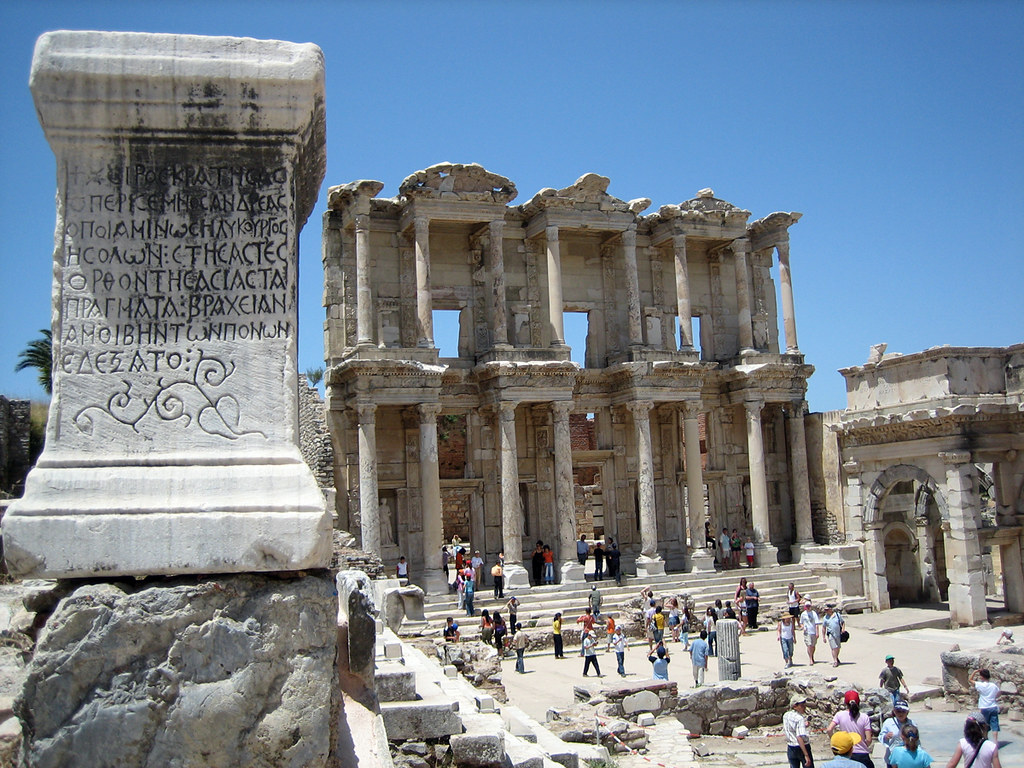 The FUNKIEST thing we did though was to go hot air ballooning over the Cappadocia area which is a fantastic area in Central Turkey with amazing valleys filled with bizarre penis shaped rock formations and fairy chimneys full of cave houses where people used to live in during the Byzantine era. 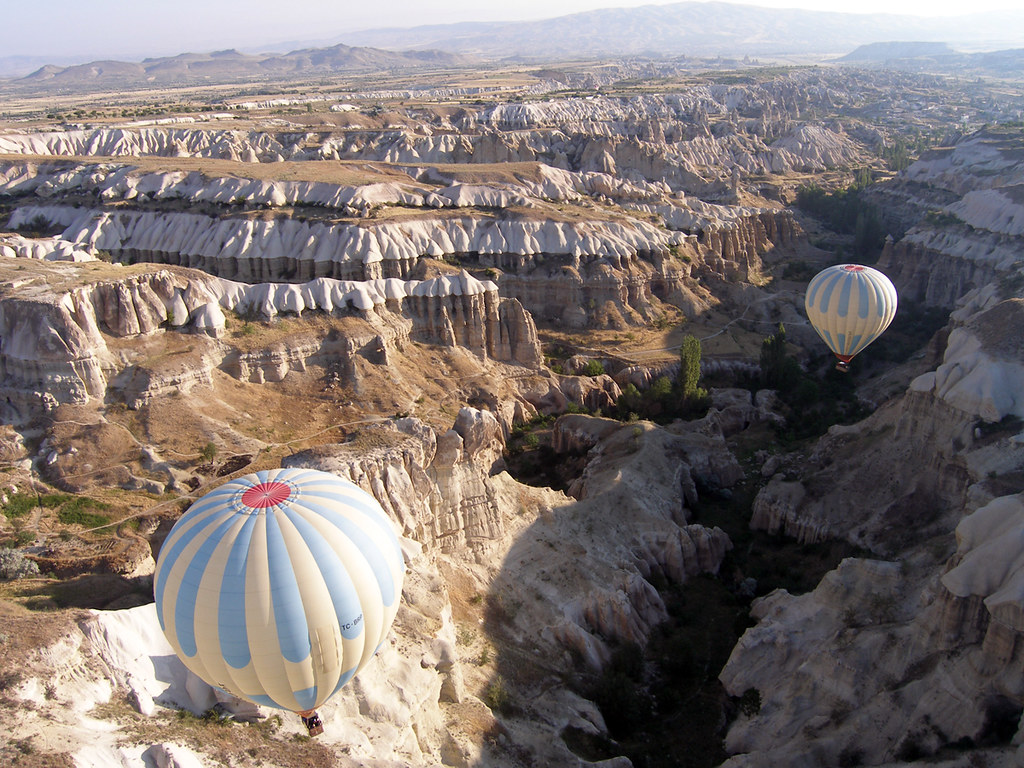 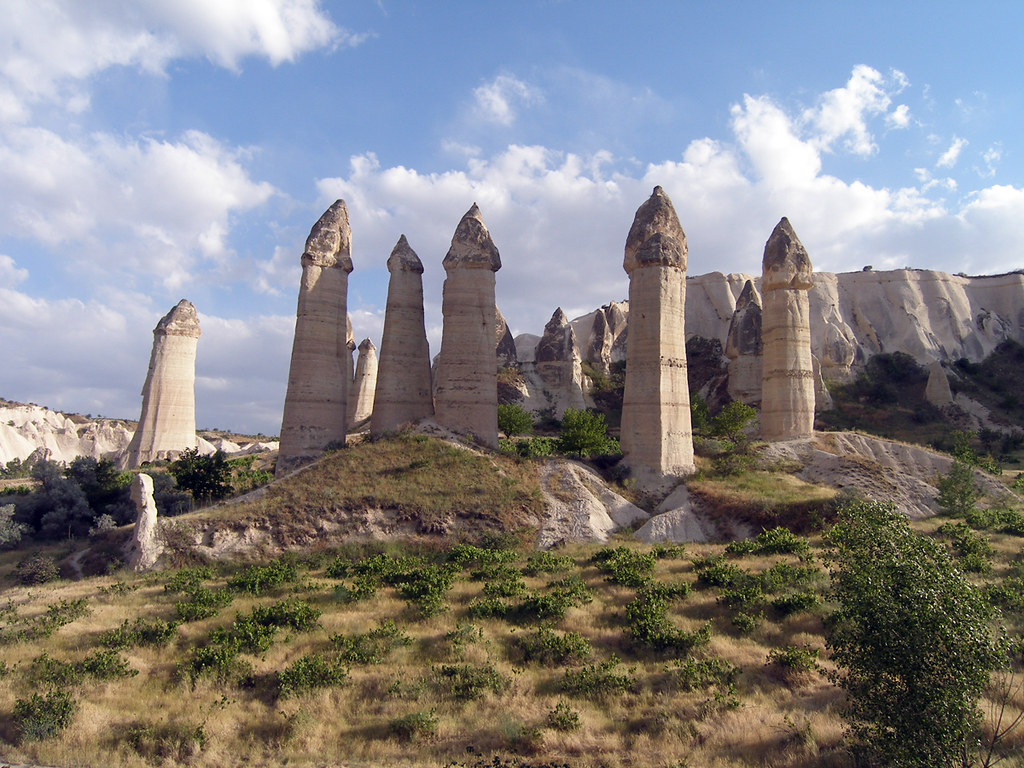 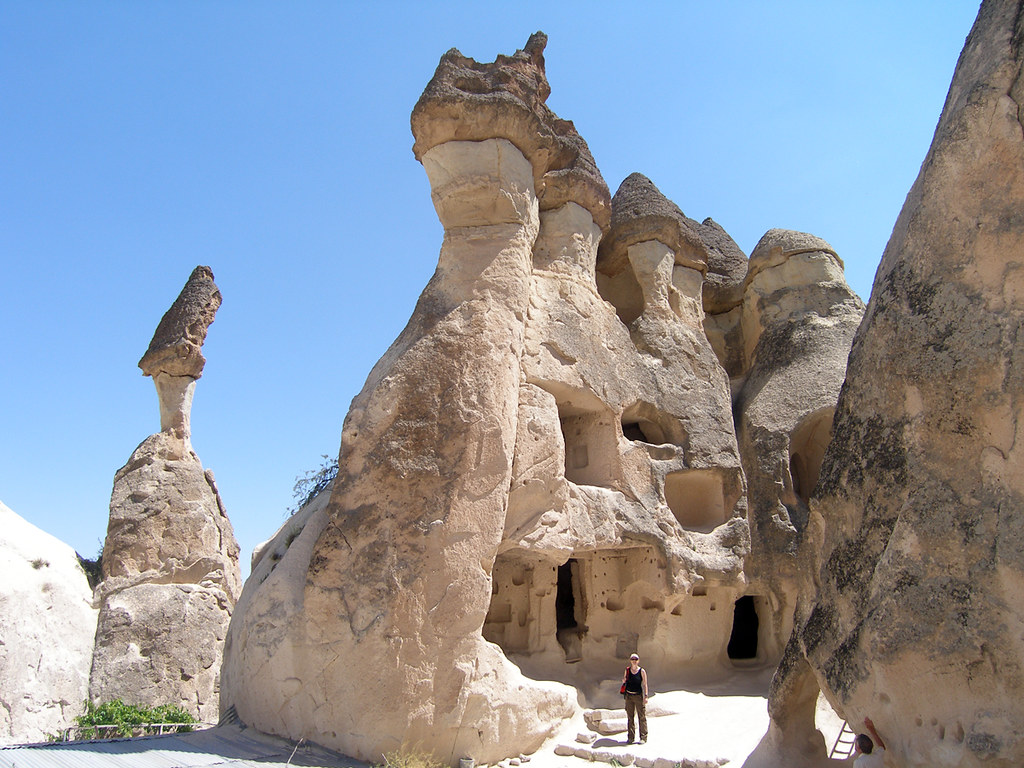 It is listed as one of the 1000 things to do before you die and we would fully agree… We LOVED it! If you are keen, we went with www.kapadokyaballoons.com which we would recommend.

We also managed to grab a car and drive out to Central Eastern Turkey to check out some amazing monolithic heads from the Hittite peoples which were found high up on the summit of Mt Nemrut Dagi. 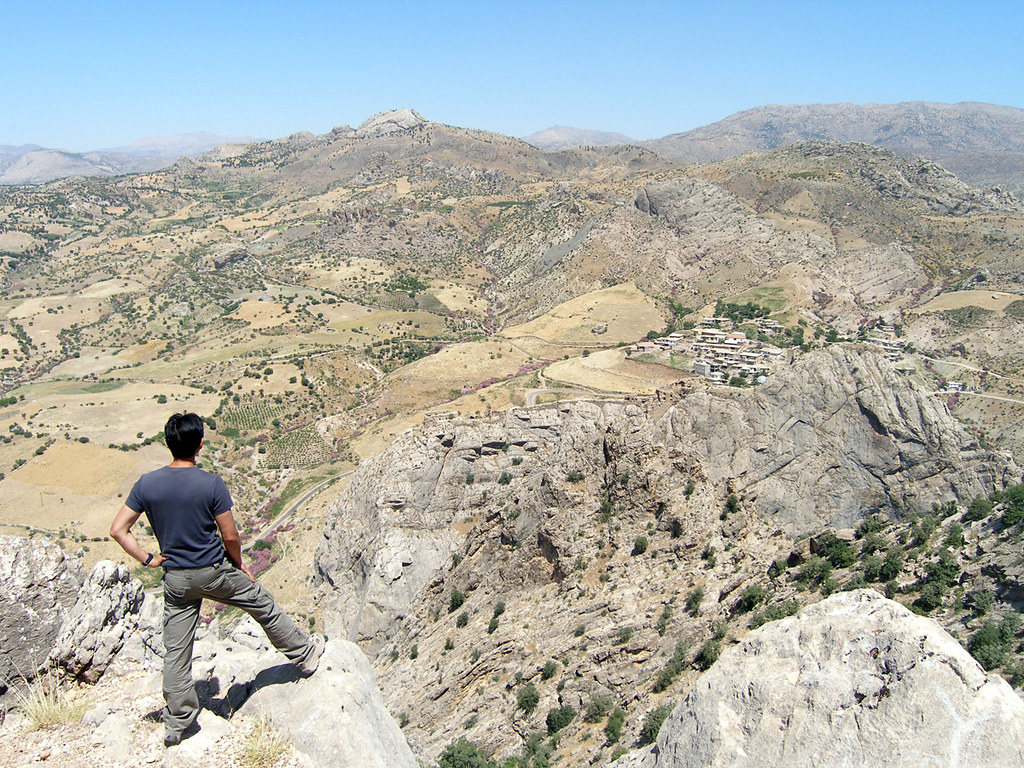 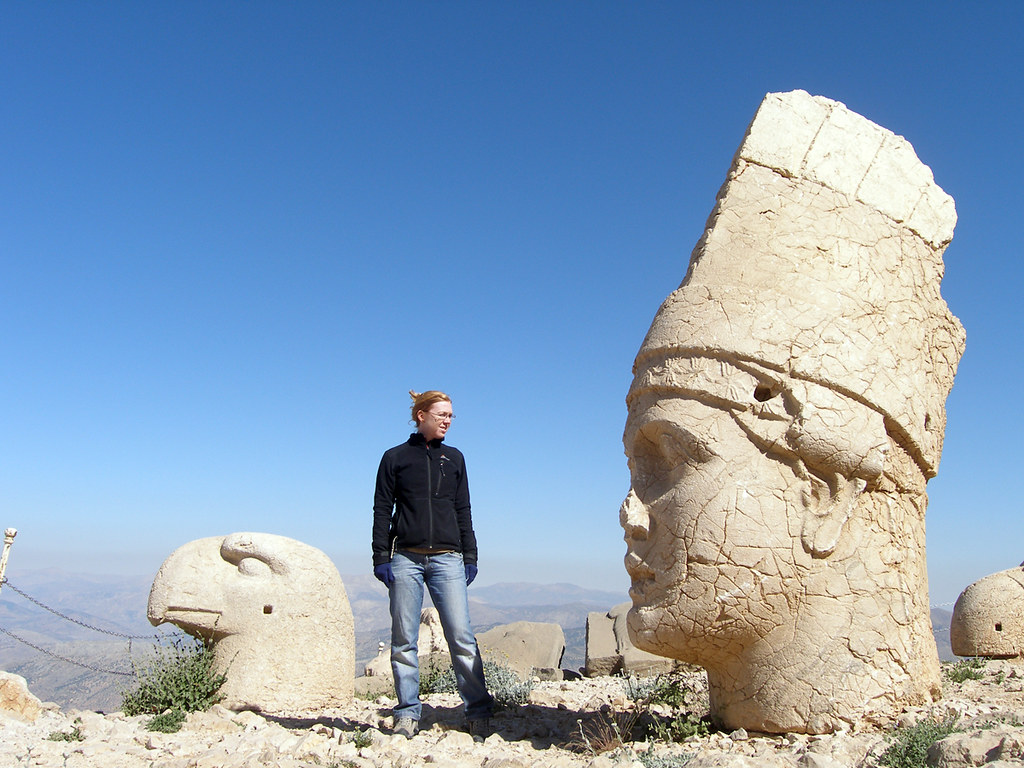 Now, although the heads were some of the most fantastic monoliths that we have seen, the thing that impressed us the most was that we were complete SUPERSTARS since very few tourists get out this far since it is close to the Iraq and Syrian borders. 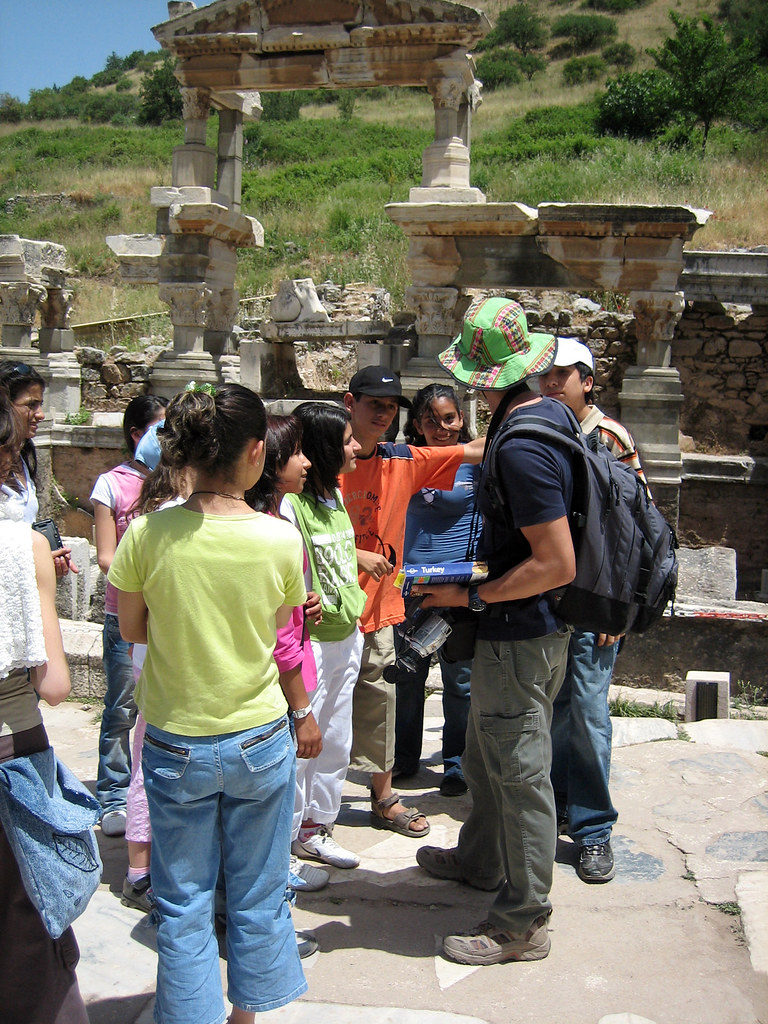 However, after a while it dawned on me that since Middle Eastern men love violent movies, their only exposure to Asians is Jackie Chan, Bruce Lee and Jet Li so I reckon they thought that I could probably Hong Kong Phooey their arse!

One day I’ll have to thank those guys for making the movies that allow me to walk through the Middle East with respect!!!

Anyhows, in 2 days we are off to Munich for Australia Vs Brazil in the World Cup so we are off to buy some funky Istanbul electronica and stuff our faces with Baklava.

Lots of love and Turkish delights

PPS. You probably noticed that we send our blogs a couple of weeks after we write them so we have time to upload our photos… So we are actually currently in Berlin and all we can say is AUSTRALIA WAS FRIGGIN ROBBED!!! But we have had SO MUCH FUN at the World Cup in NEW SUPERHERO IDENTITIES, so photos and blogs to follow soon!!!