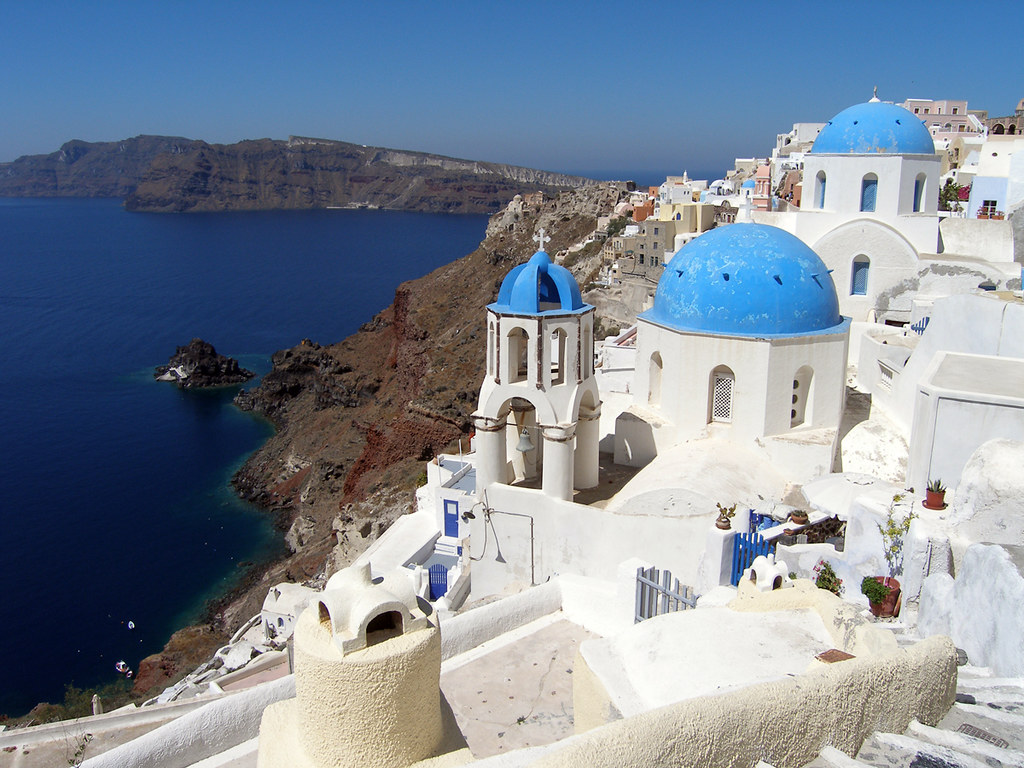 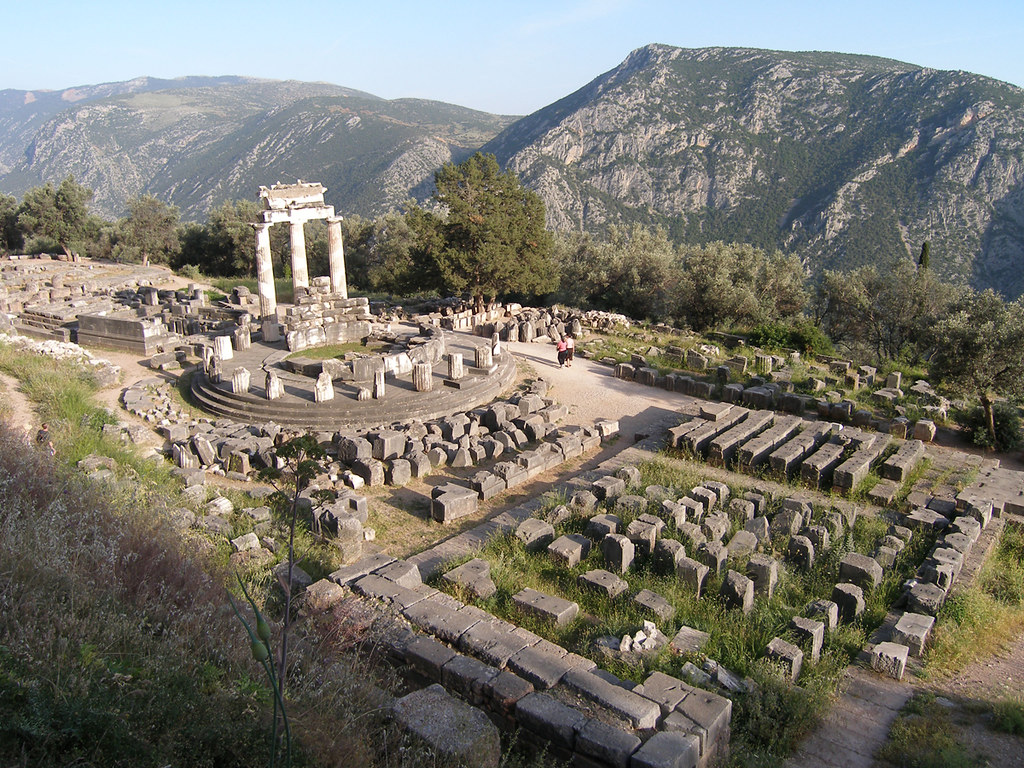 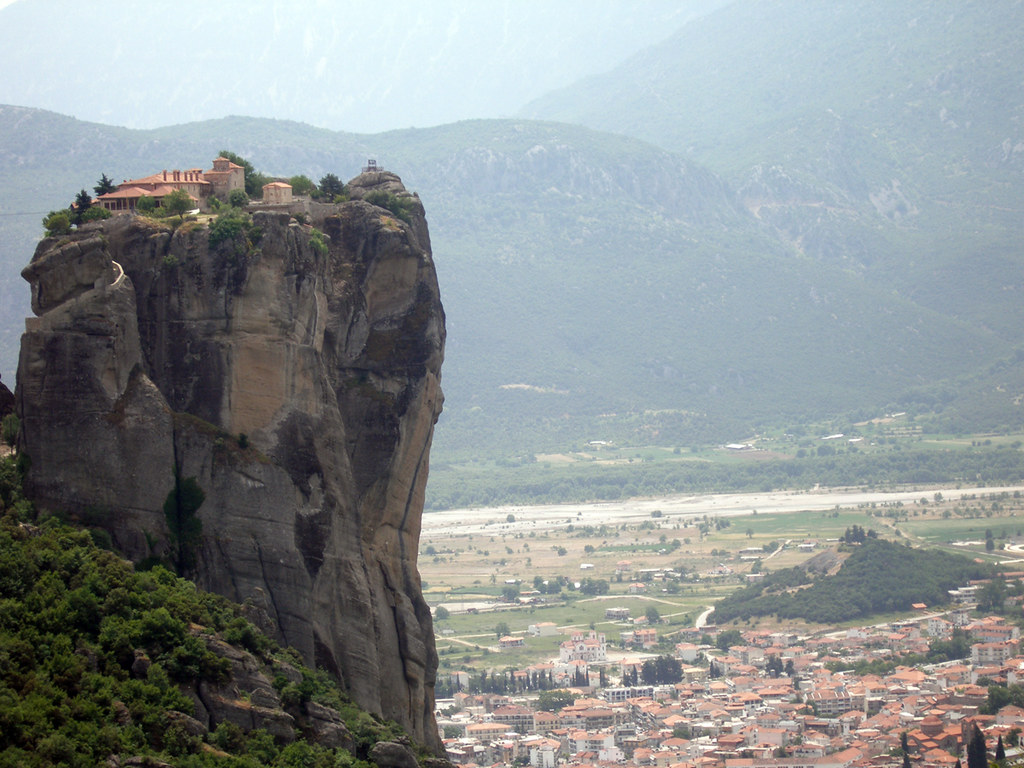 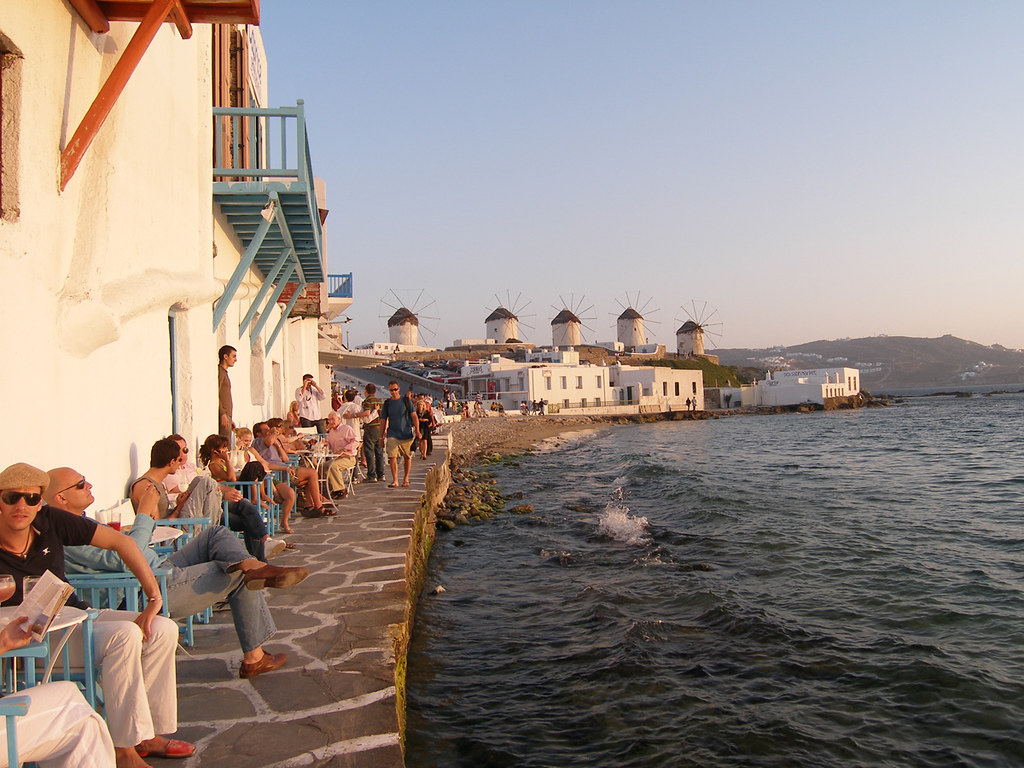 Well, we are currently on the Greek island of Samos just 3kms off the coast of Turkey and since this is our last day in Greece after island hopping for the last couple of weeks, we thought we’d take the time to update our travel blog and fill you in on yet another of Ced & Avril’s quests for COOLNESS…

Firstly, we rocked into Athens 2 weeks ago and compared to Iceland we found it hot, dirty, smelly and chaotic… and we TOTALLY LOVED it!!!

Man… the Greeks are probably THE MOST friendly and hospitable people that we have come across in all our travels, and even though Greece can be a little bit grotty, it’s been a real pleasure to travel here since they really are SO vibrant and welcoming.

And somehow, even with the huge tourist numbers that come here, they have still managed to maintain their relaxed chillout lifestyle and humor without becoming arrogant like the Italians and French, which was something that really shat us off in those countries…

Not to mention, that it was really COOL to be bumming around some of the famous sites from Greek mythology since I have an almost encyclopedic knowledge of Greek myths and legends from reading Hercules comic books and watching “Clash Of The Titans” a zillion times!!! 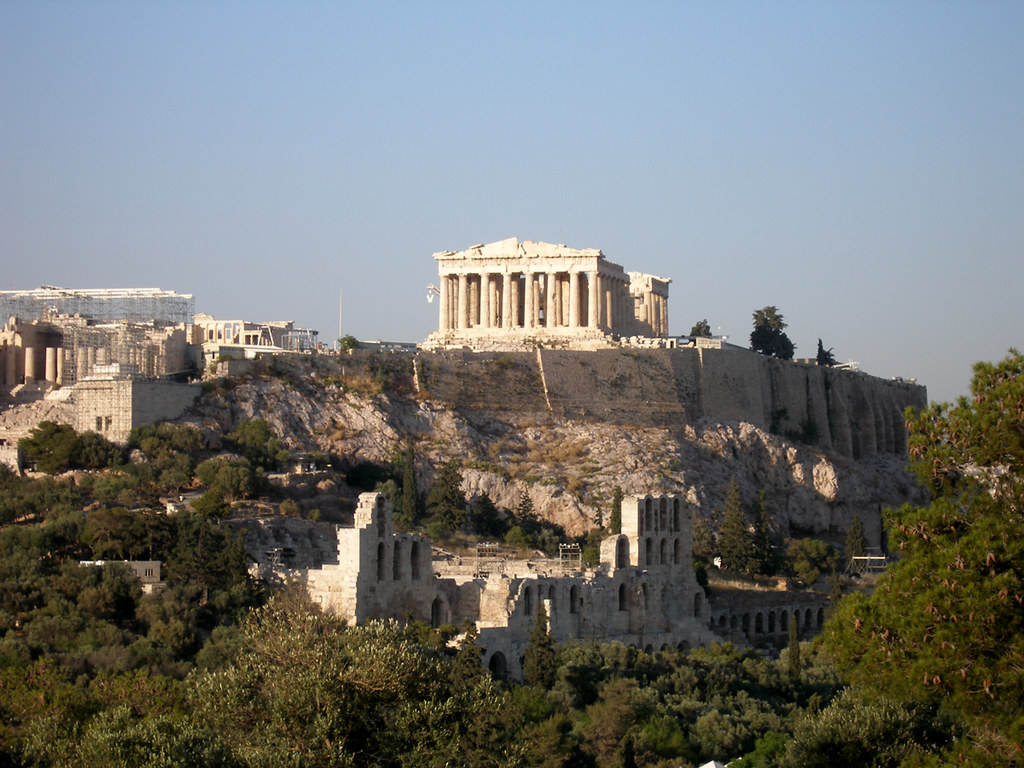 And of course, the Greek food has been simply AWESOME and the perve factor has been SURPRISINGLY good despite our Aussie Greek chick stereotypes of an unattractive, short, gum chewing, hairy armpitted, tough talking woman with big hair, overdone make up and baggy lycra black pants called Effie.

Avril on the other hand didn’t think much of the Greek guys, although she thought that the statues of the Greek Gods with their tight bums and muscley legs were DEFINITELY a good perve!

However, even though we have been together for 12 years this year, there comes a time in ALL relationships when all couples need to finally answer the burning question of who is the cooler partner…???

So just like Brad Pitt Vs Angelina Jolie in Mr and Mrs Smith, Greece became the battlefield for Ced VS Avril: The COOL Challenge!!!

So the first challenge came to light in the Central Greece town of Meteora. 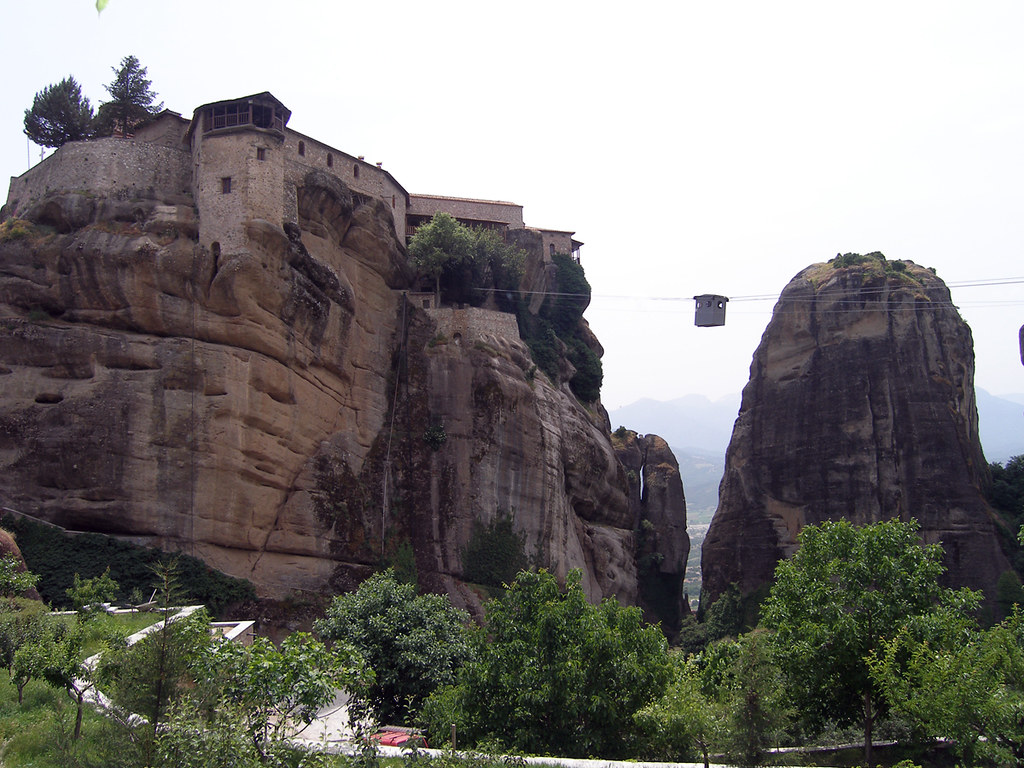 Now, although there is some amazing Byzantine history here, I have totally wanted to come here ever since I saw Roger Moore dangling from a cliff trying to climb up to one of the monasteries in the 1983 James Bond movie “For Your Eyes Only” …which by the way is second only to “The Cannonball Run” as one of the most influential movies of my childhood! 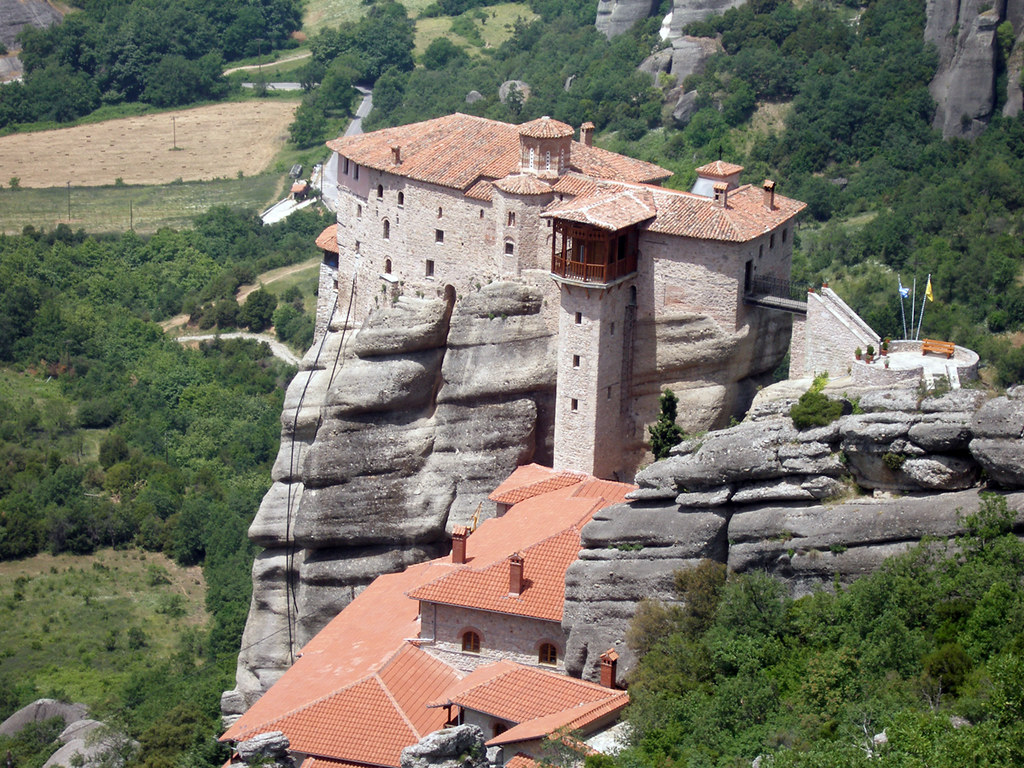 Avril on the other hand, couldn’t remember if she had seen the movie at all, and at that point I was HORRIFIED to find out that she wasn’t even a James Bond fan and probably hadn’t seen every Bond film either!!!!

Man… I was shocked!!! I SERIOUSLY don’t know how our relationship survived this long with her NOT being a James Bond fan… And I shudder to think how people can grow up normal without Mr Bond in their life…

After that we headed off to Santorini, which is the postcard perfect, romantic island of brilliant blue domes and white washed adobe buildings that sprawl along the crest of an ancient volcanic caldera high above the blue green waters of the Mediterranean. 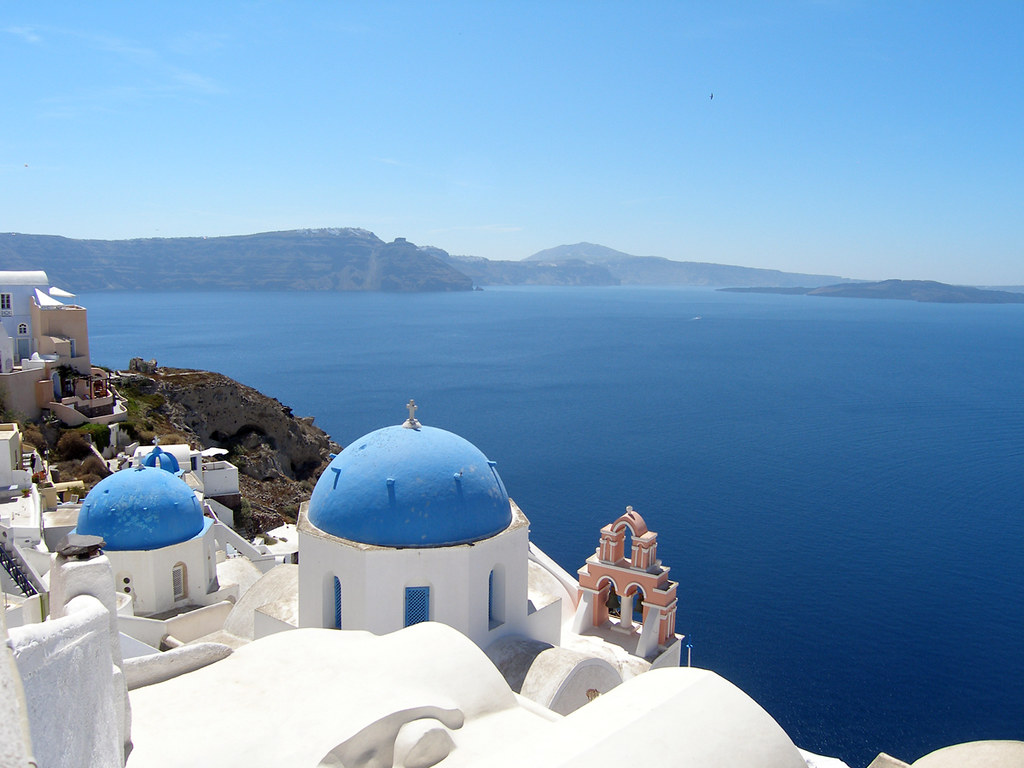 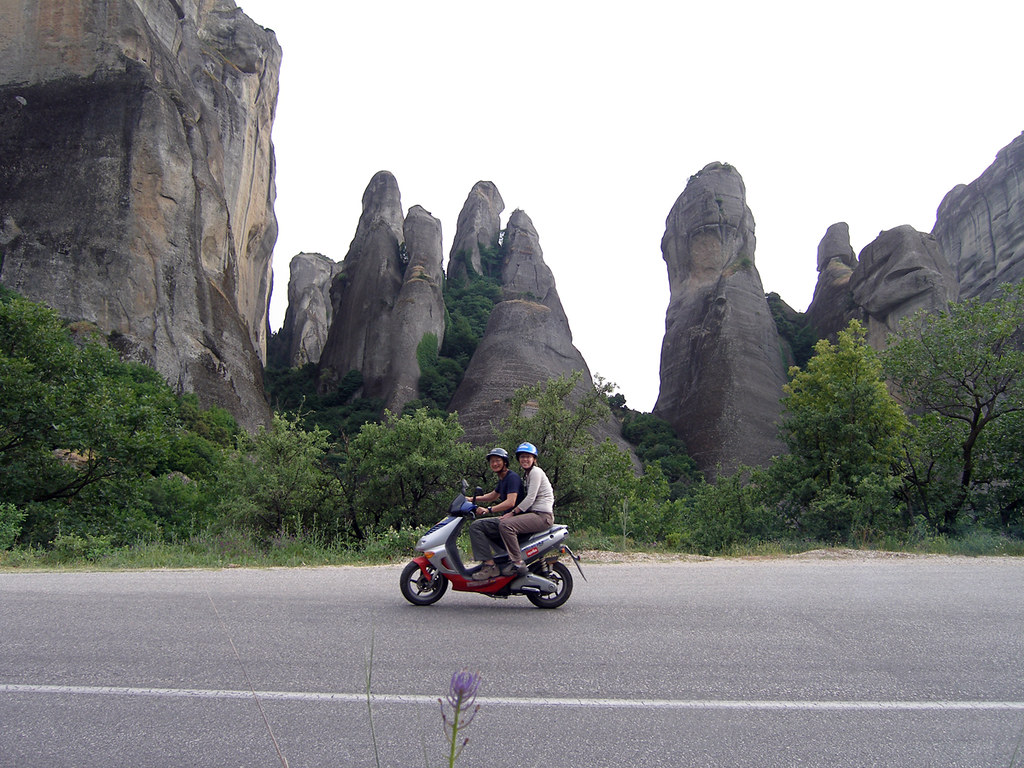 Well, although normally I thank the Lord for European women’s penchant for nakedness… (Amen) …I still consider all topless chicks to be a health hazard to male motorists.

But somehow, amazingly I managed to survive for 4 days zooming around the Santorini beaches FILLED with topless women without killing myself!!!!

Avril obviously being very UNCOOL by this stage managed to make up some ground on the party island of Mykonos, which is where all the beautiful people normally hang out on beaches like Paradise Beach and Super Paradise Beach which pump along with dance music and table dancers ALL day long. 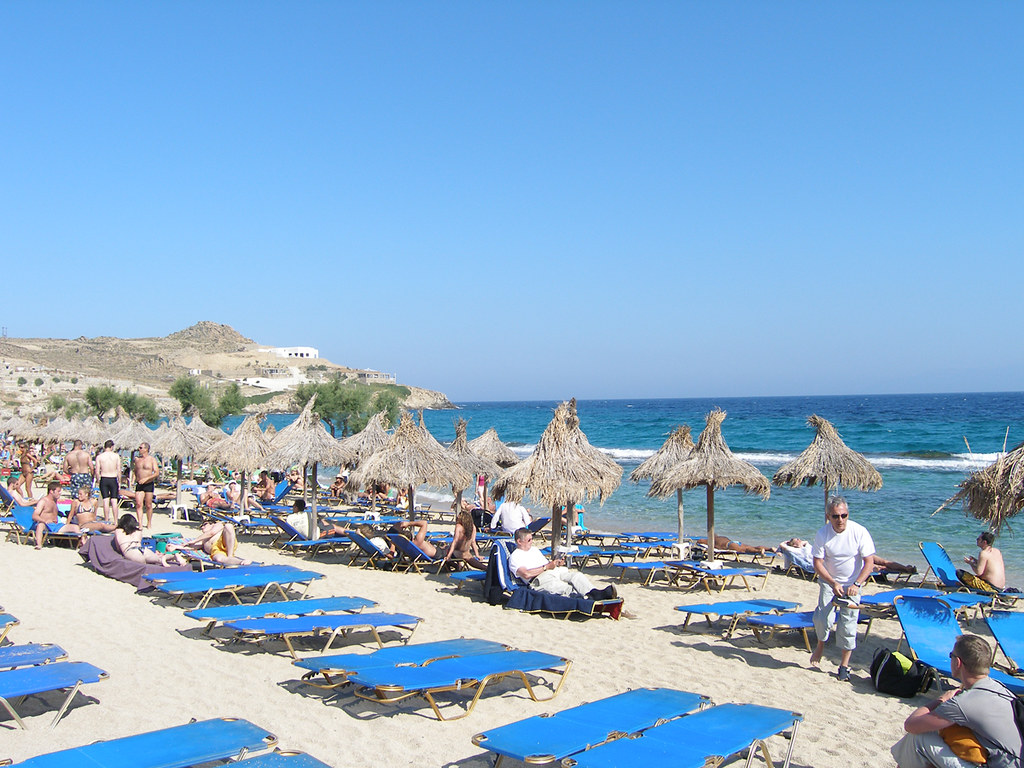 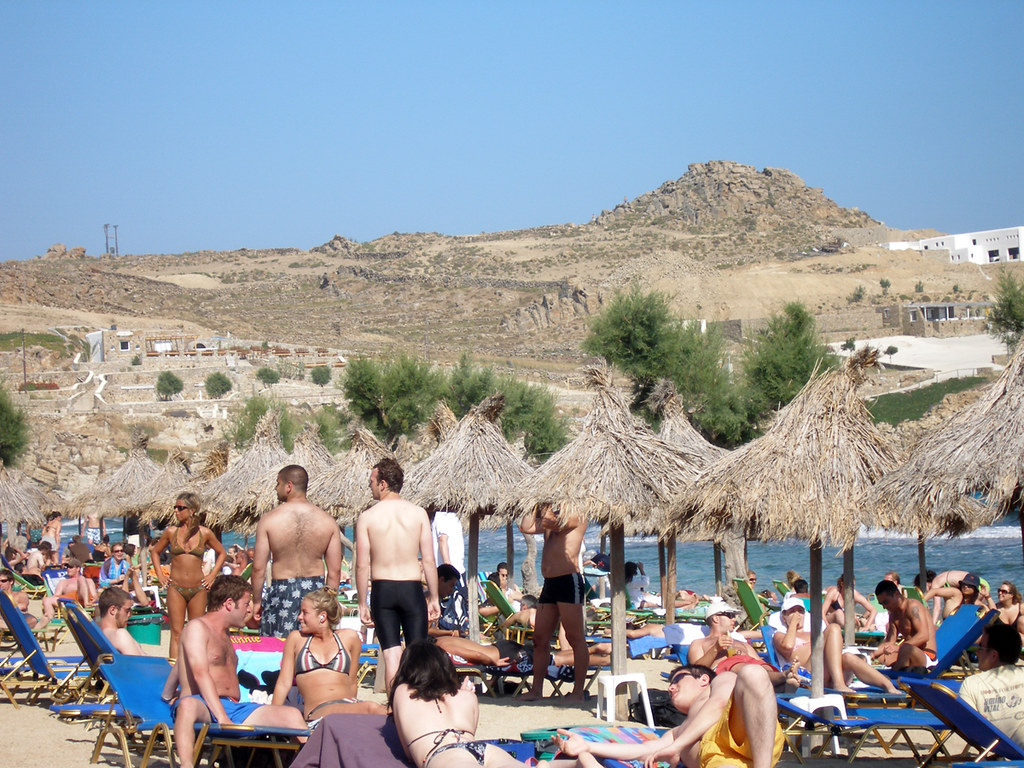 Mykonos is also considered a premier gay resort island so when we challenged each other to who could get the most attention from the boys, I thought I’d have a pretty good chance in my new tight European gayboy swim pants that I bought after leaving my togs in Iceland… 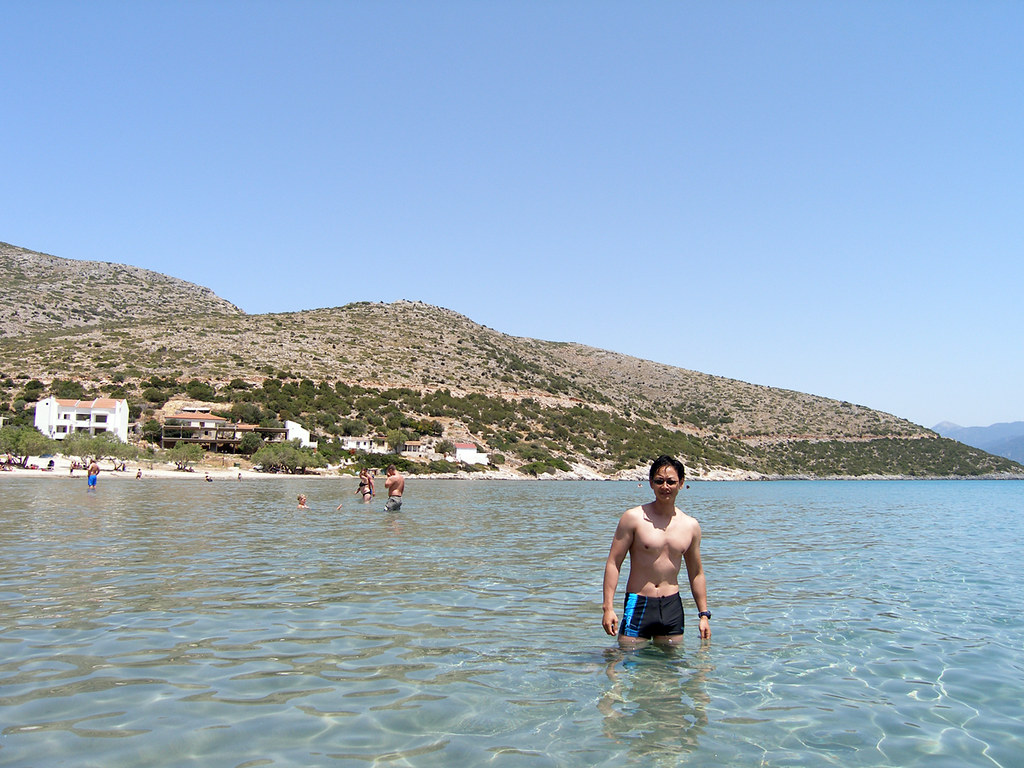 Avril however, won hands down by wearing a very tight white singlet with no bra on a chilly night, which she is now trying to market as a INFALLIBLE gaydar since she was able to pick the gay boys from the straight boys within 2 seconds flat!!!

…However, an unfortunate side effect was whiplash in all the straight boys… And yes, she let me put the photos up on the website, so you can see why… 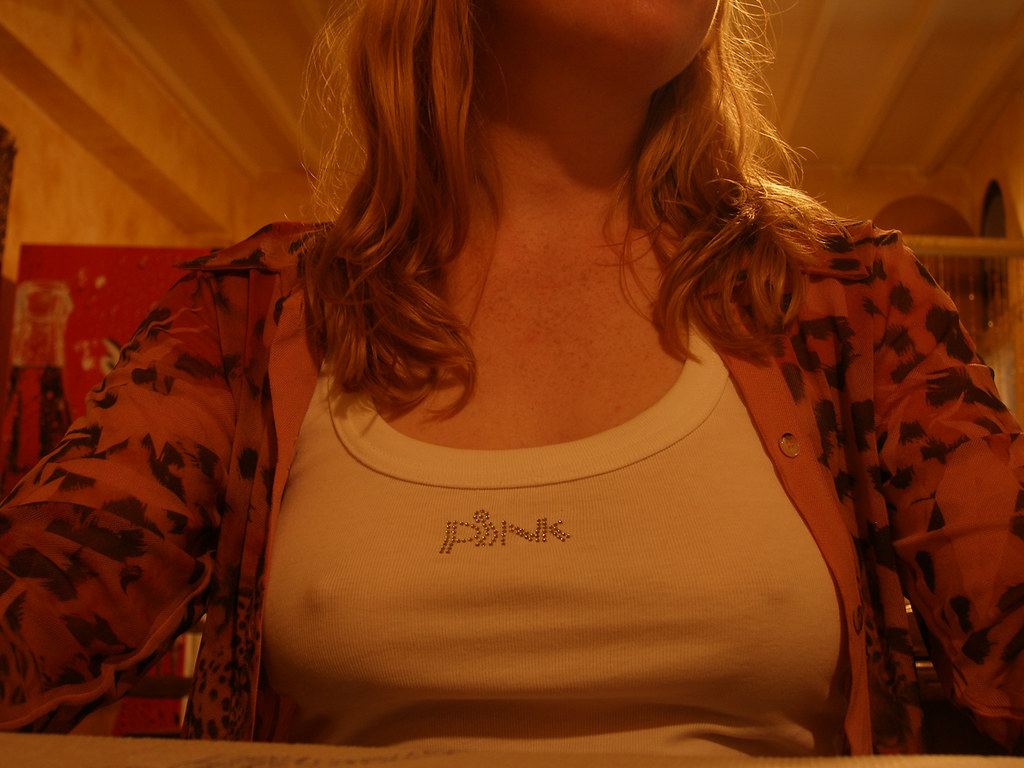 And now we are currently on the island of Samos, where this morning as we were riding to Pythagoria Harbour, the birthplace of the triangle dude Pythagorus… somehow we managed to ride at about 80km/hr through a patch of flowers filled with BIGARSED BEES!!!! 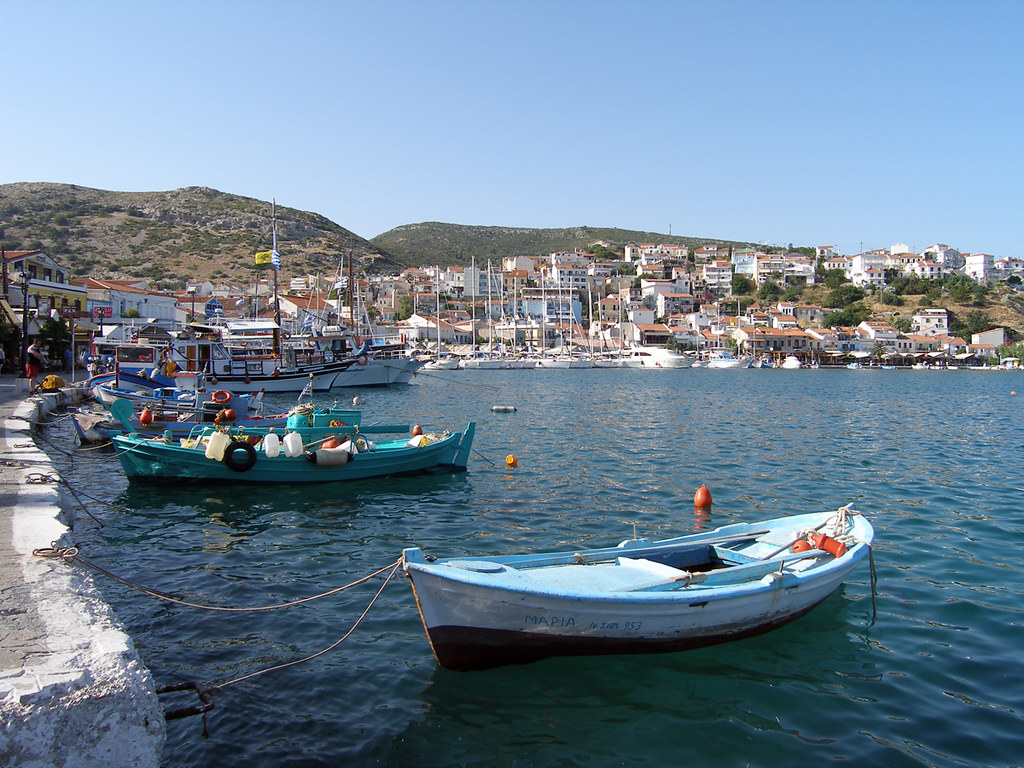 Well, Avril skillfully managed to deflect them off her face and helmet, but I ended up getting one stuck IN MY HELMET which THEN stung me on the face right next to my FRIGGIN LEFT EYE!!!!

HOLY CRAP!!! Don’t do this at home kids because it FUCKING hurts!!!! And so now, I’m sitting here typing this blog with a swollen face and sulking… but I guess at least, balance has now been restored to our COOL FACTOR challenge which is good because I’m really needing some sympathy right now…

And there you have it. An excellent way to crap on about a country in a blog and tell you all how cool we are!!!

So, anyhows tomorrow we are off to Turkey so we’ll probably write again but it’ll be from Istanbul not Constantinople…

Lots of love and COOLNESS

PS Our Greece photos are at this link