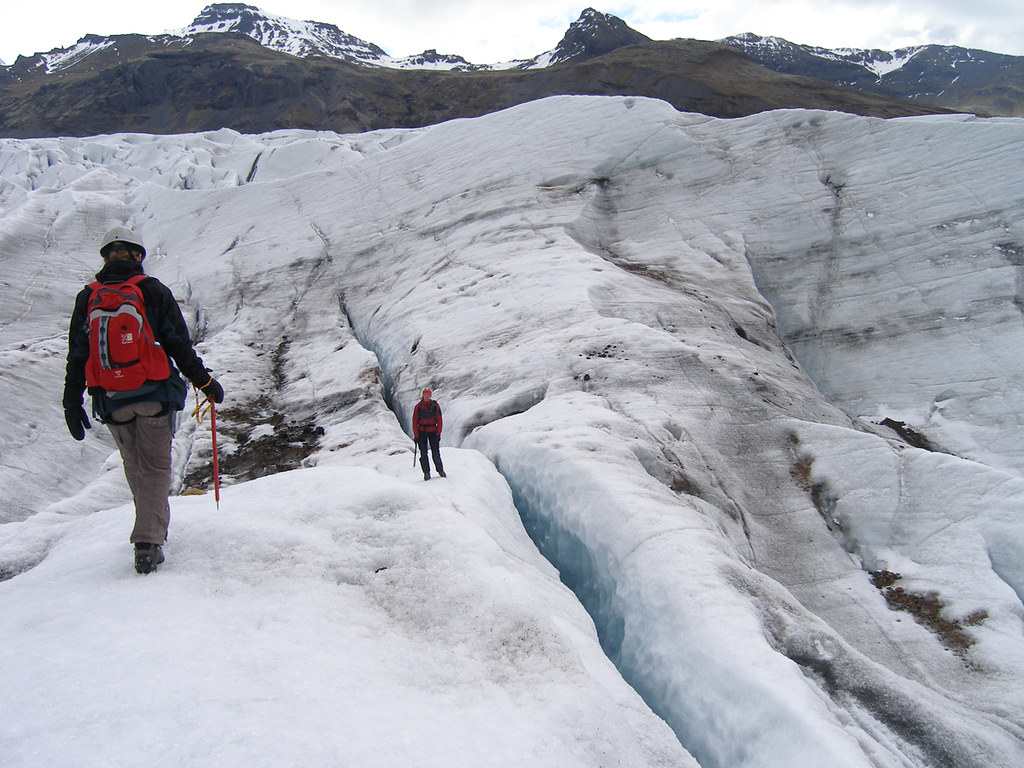 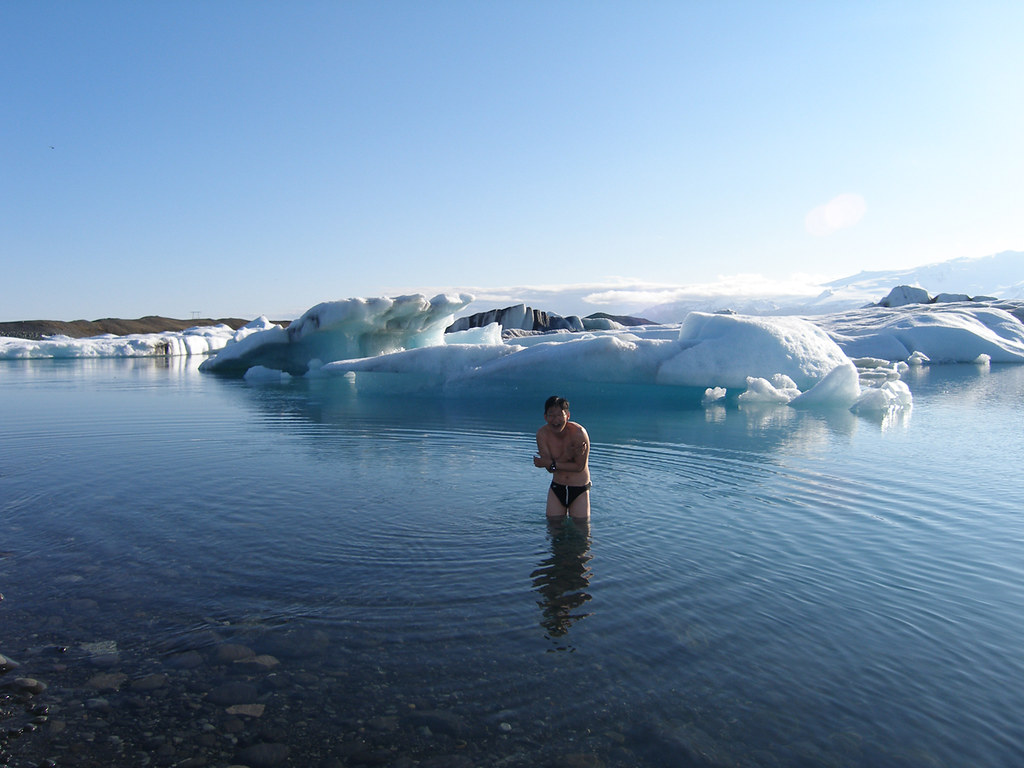 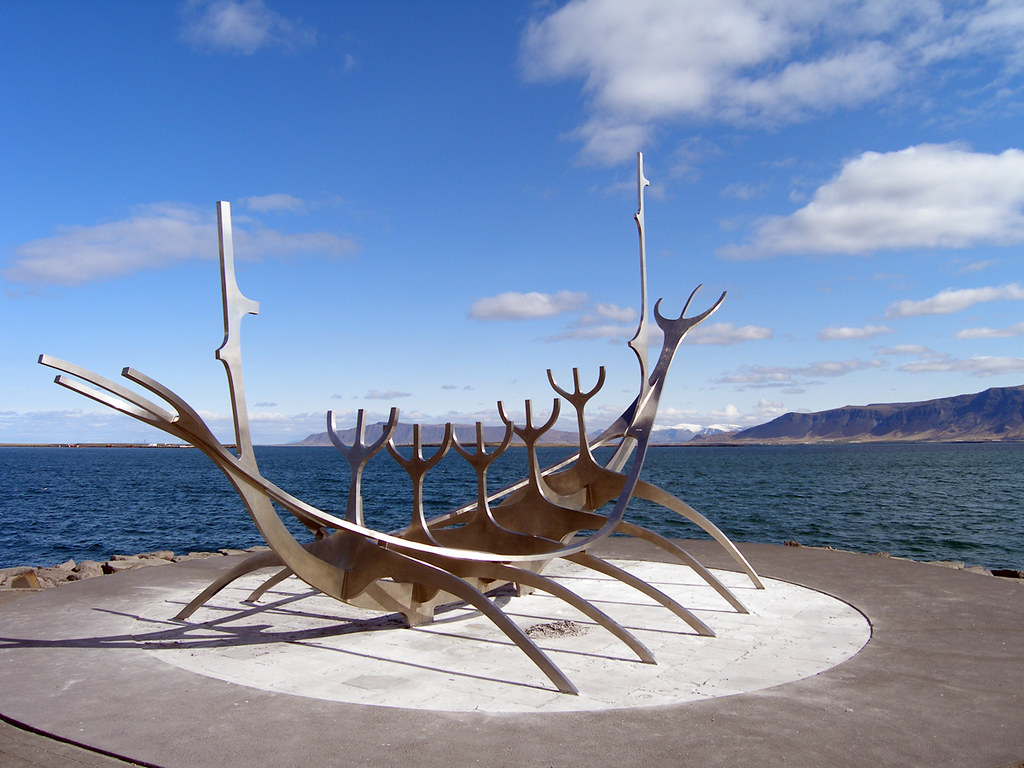 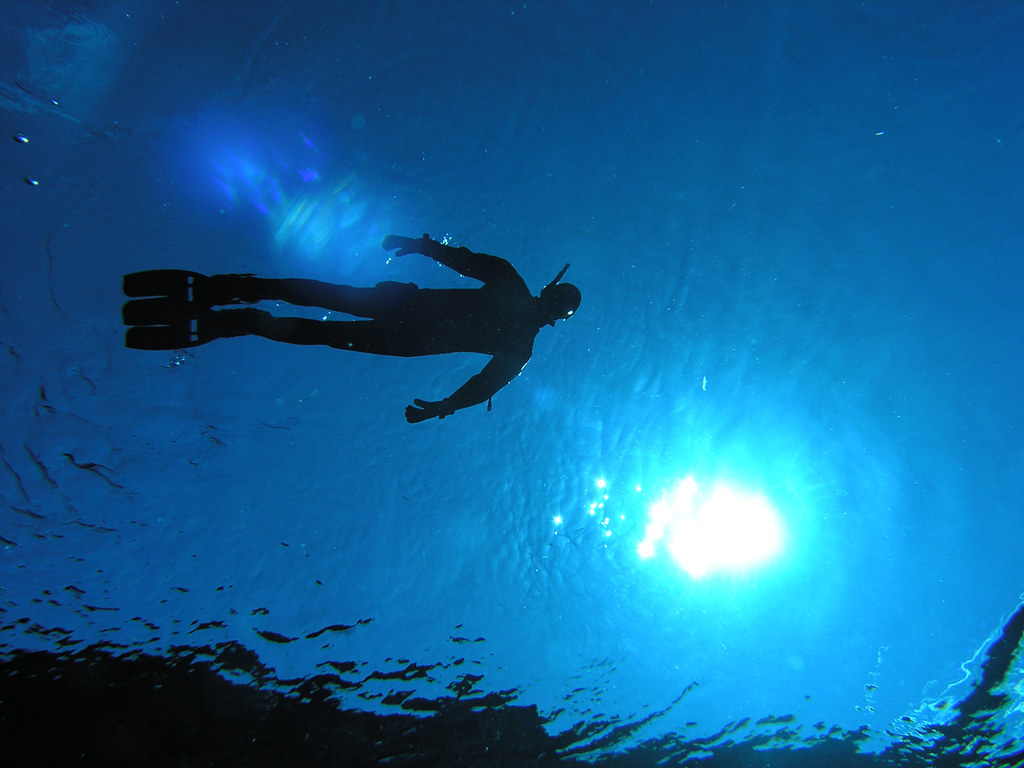 Well, we are currently chilling in the youth hostel in Reykjavik, Iceland and just like Corey Hart says… “I Wear My Sunglasses At Night, so I can… so I can… check out the sunset that’s right before my eyes…”

…even though it is actually 11pm at NIGHT!!! Man… the Earth definitely turns slower up here!!! 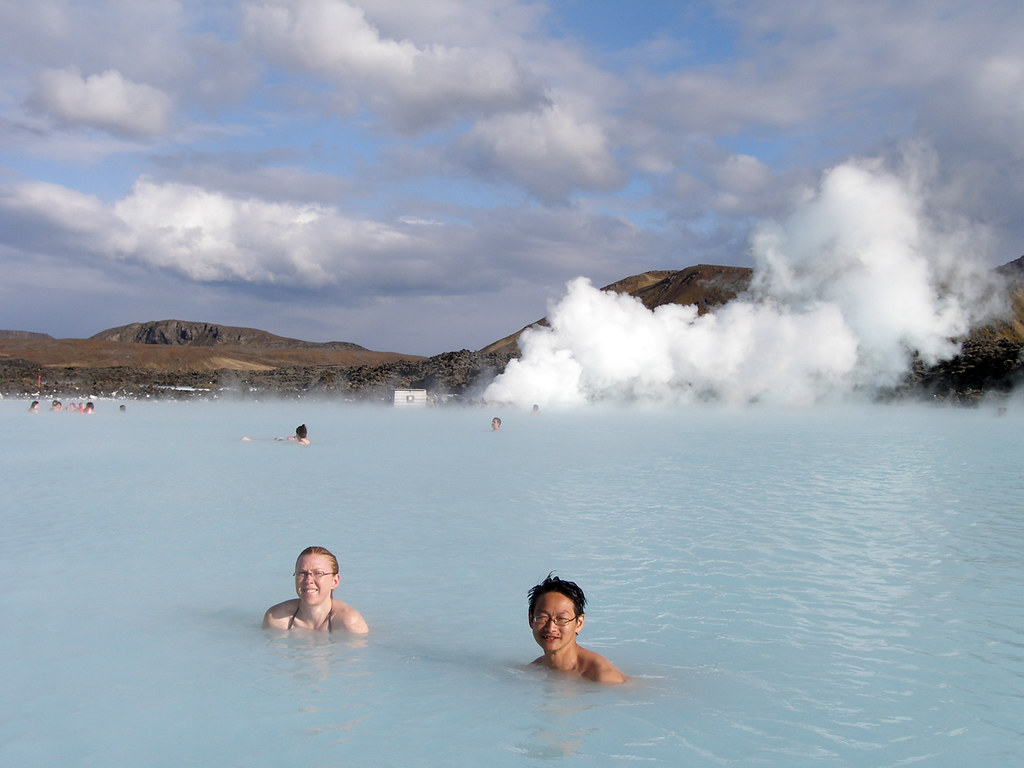 Man… yesterday we were at the Skögar museum in southern Iceland, and the curator who is considered a national hero for amassing a wealth of archaeological material actually groped me up!!!

At first I thought it was cute having this dottery old man lead me around while stroking my hand and giving me a personal tour, but when he started rubbing my arse and running away every time Avril showed up, the penny finally dropped…

Well, I suppose I could have just closed my eyes and imagined that I was being fondled by a dirty young woman instead of a dirty old man, but the fact that he smelt like STALE URINE just completely killed the mood!!!

Now, I’m not one to normally deny an old man his jollies, but I really wasn’t comfortable with the whole thing, and not being sure whether it was polite to slap a national hero, we ended up waiting until his back was turned and then just running away…

But despite being molested, Iceland is TOTALLY WICKED and we LOVED it!!!!! And we would have to say that it is now our most favourite place EVER excepting Antarctica of course!

Man…. Iceland is so AMAZINGLY unique, that it really is very hard to describe in words just how ruggedly beautiful and serene the whole place is.

Iceland is known as the land of fire and ice, since there are a huge amount of active volcanoes here, and most of the landscape is desolate black lava fields coated in soft squishy white and yellow Icelandic moss as far as the eye can see. 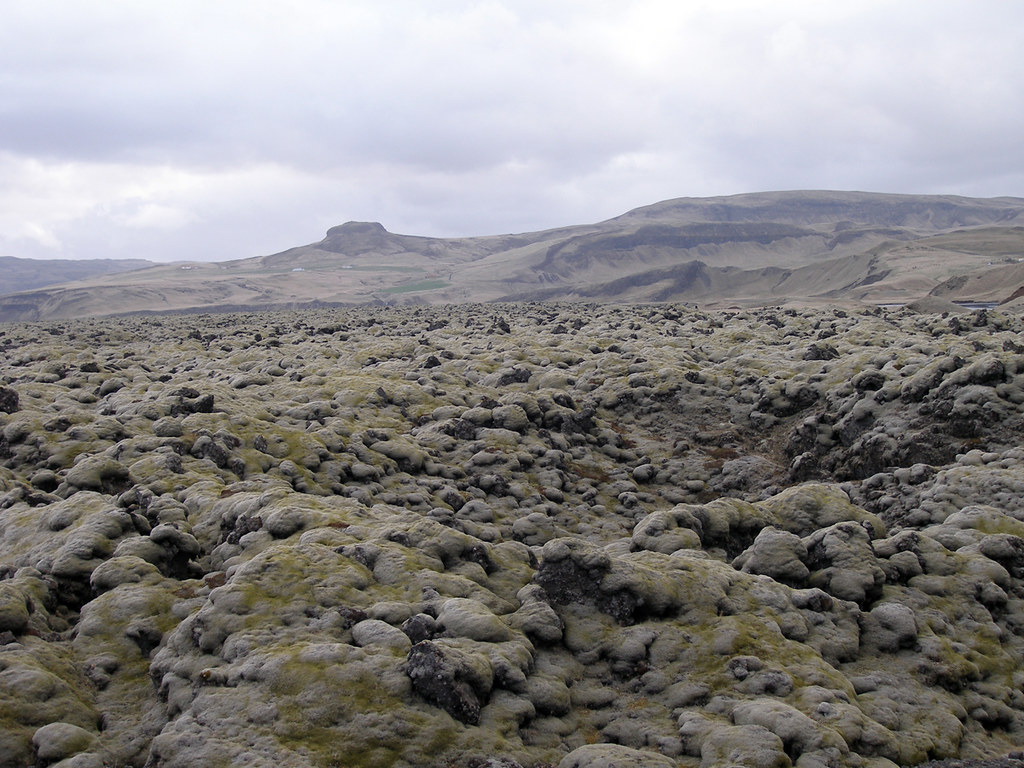 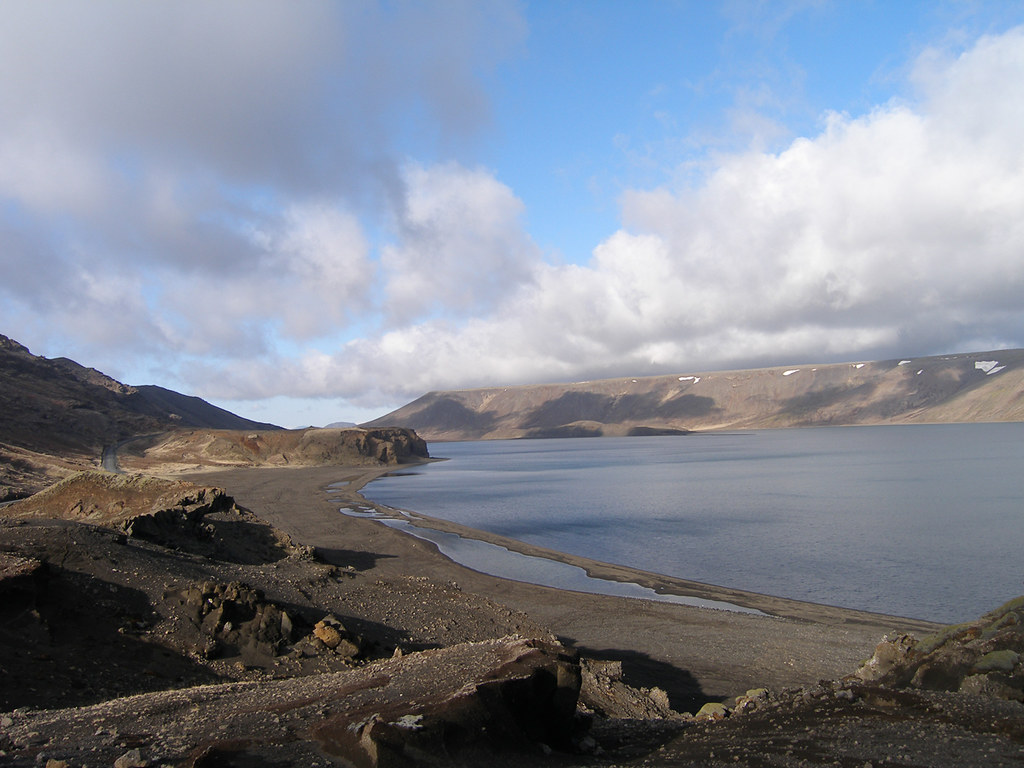 Not only that, but the hills are all volcanic, or angry striated pinnacles and plateaus that just have huge steam holes, geysers and fumaroles shooting steam into the air all over the place!!! 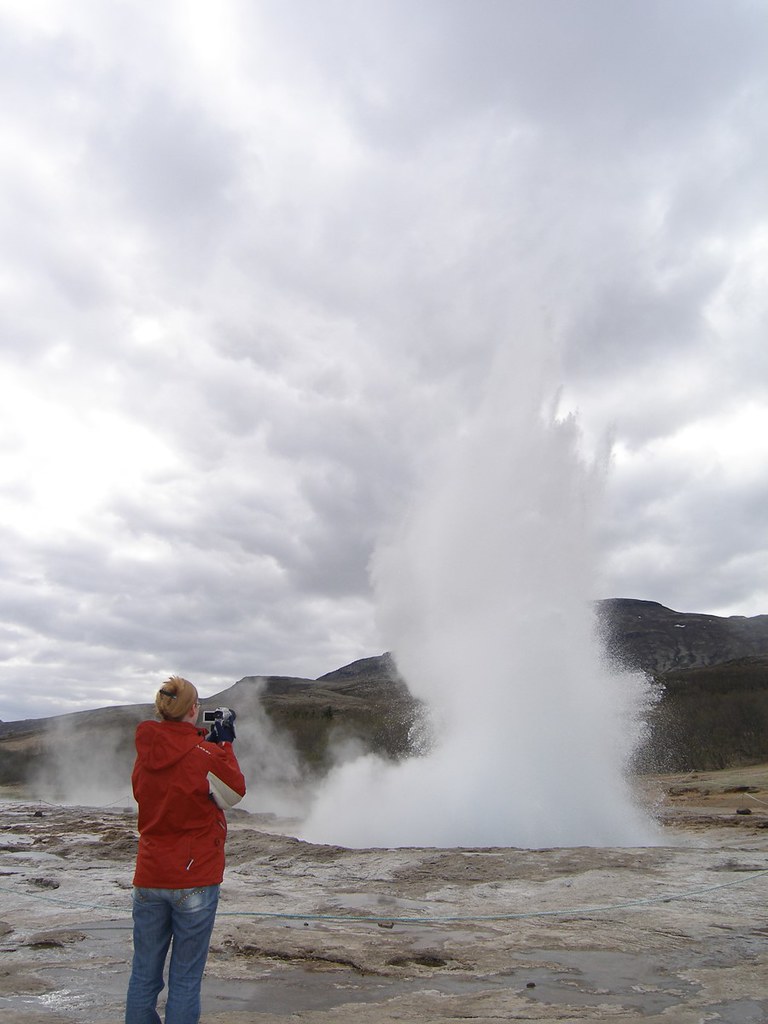 In fact the whole place is just SMOKING!!!… So it’s no wonder that in Norse mythology, the Vikings all thought that Iceland was the gateway to Hell, and Jules Verne also used Iceland as his setting for Journey To The Centre Of The Earth. 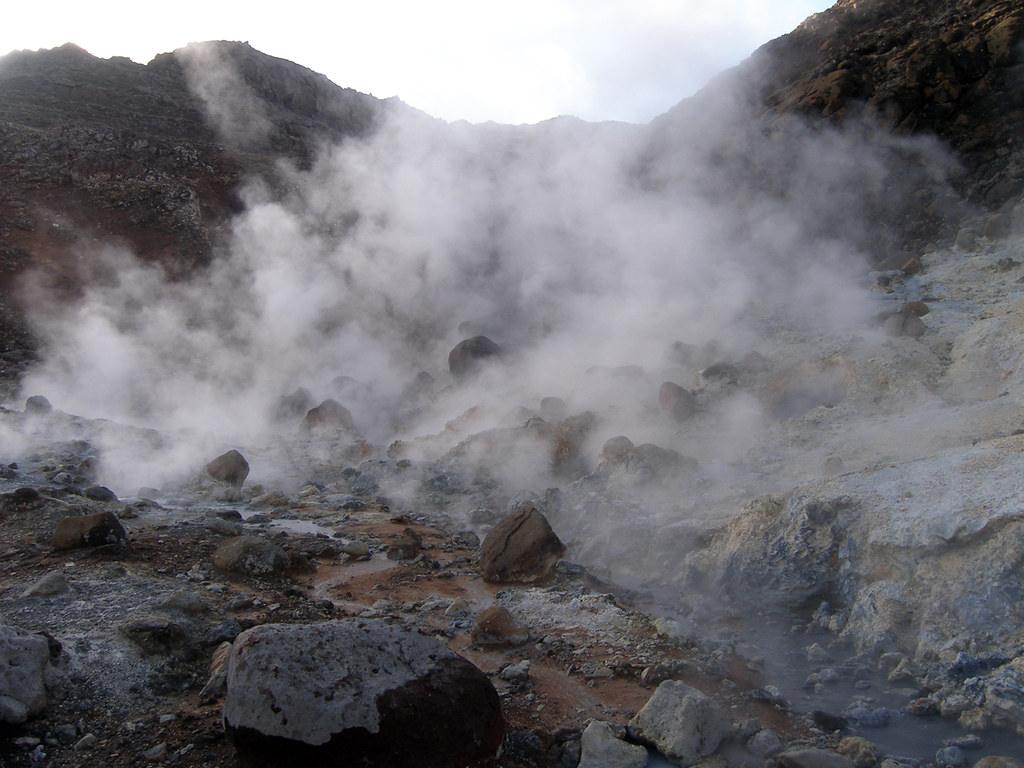 And yet, there are also huge ice caps here with at least 9 HUGE glacier tongues that snake down from the mountains and actually come right up to the highway!!! In fact, we found it absolutely amazing that we could just park our car and scramble onto a glacier… which we did of course, just to get pictures of me getting my tongue stuck on a glacier after licking it… (don’t try this at home kids…glaciers are EXTREMELY DANGEROUS and only professionals should lick them…) 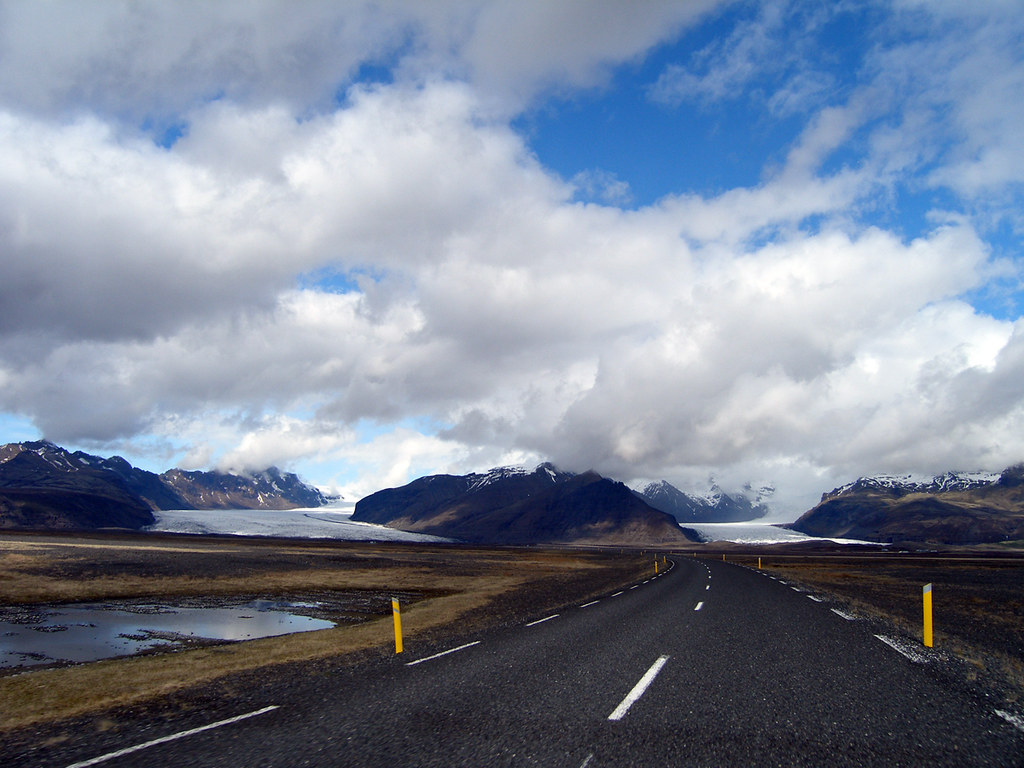 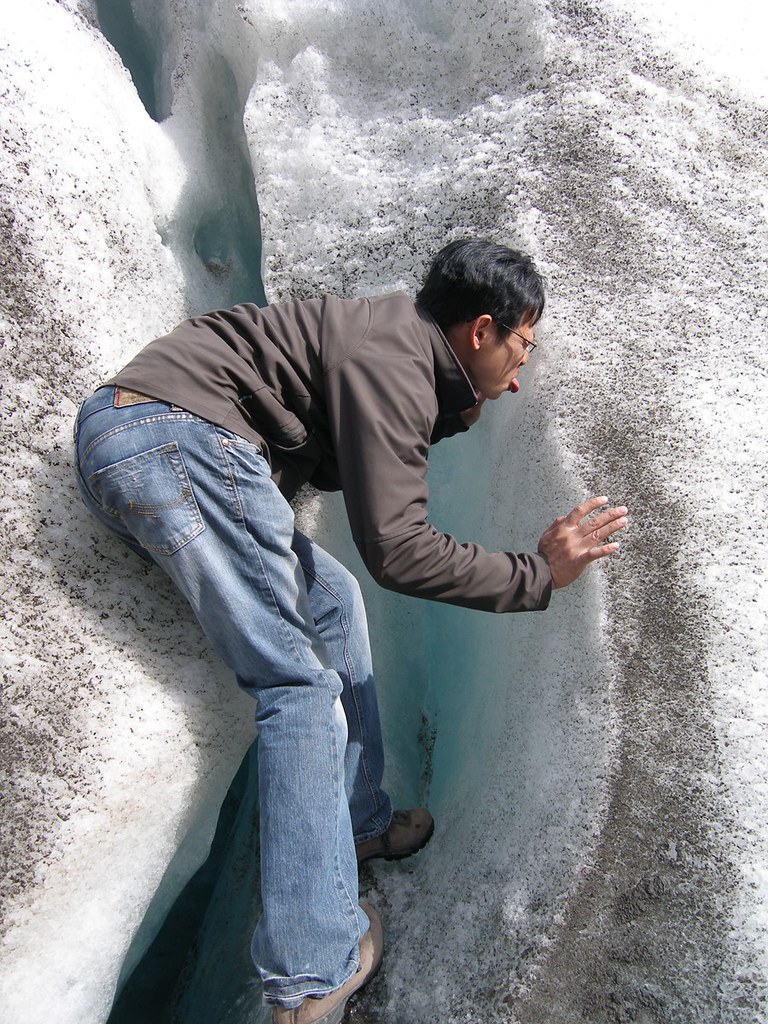 …And there is even a huge lake called Jökulsárlón with ancient blue icebergs that just float right past the main highway, which we thought was WAY COOL because they filmed James Bond “Die Another Day” and Tombraider there also. 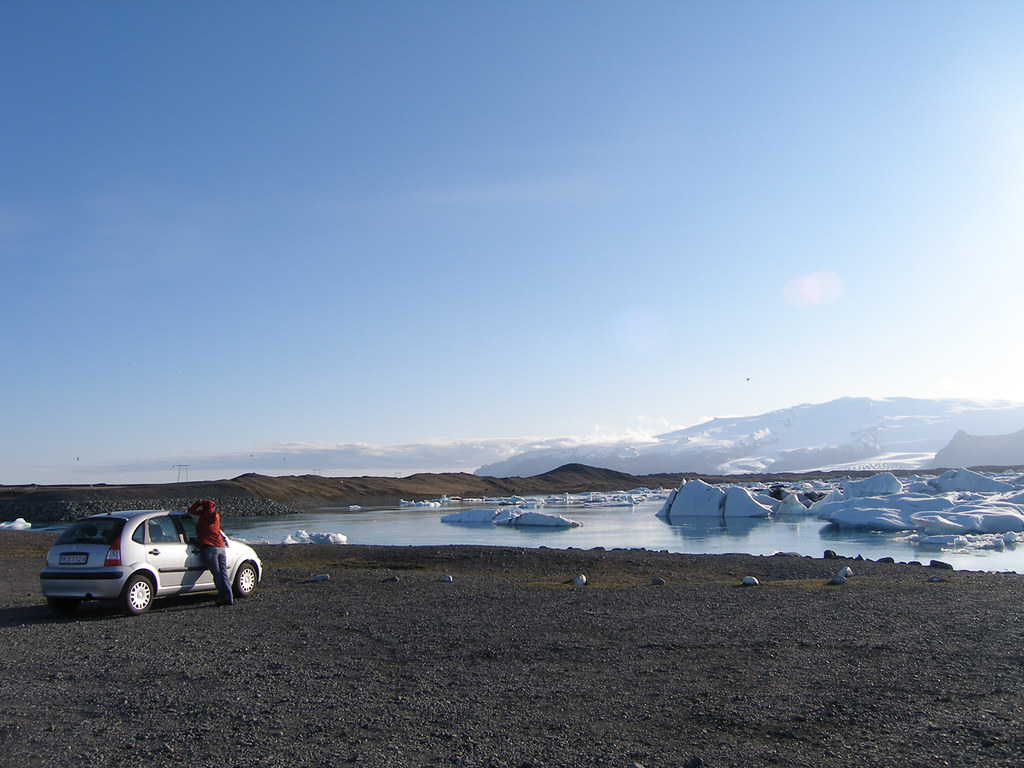 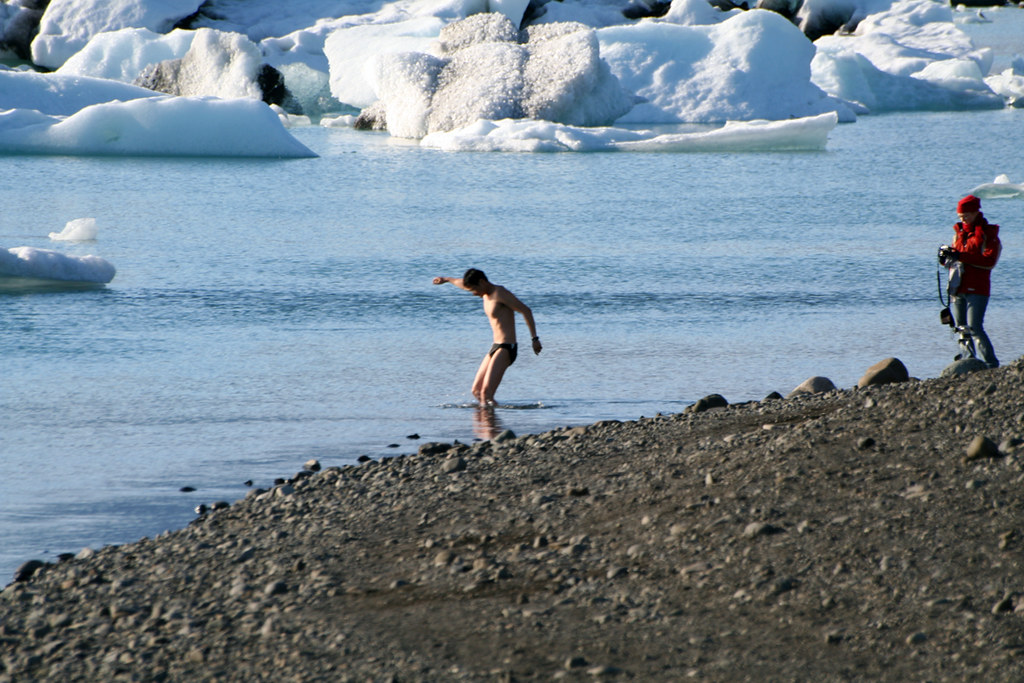 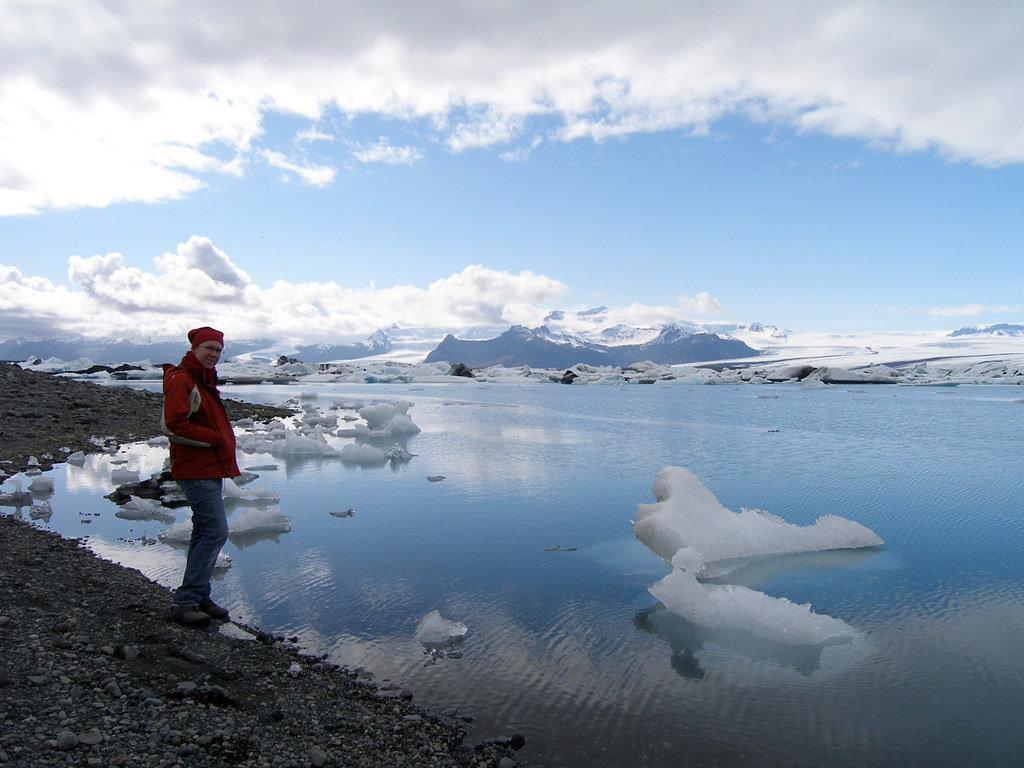 Needless to say we LOVED IT and decided that we were going to follow in the footsteps of the Scandinavians settlers and Pengu the penguin from that old 80s video game… and go ICE ICE BABY all the way!!!

Man… First we took a SUPERJEEP which is a huge jeep modified for snow up to Vatnajökull the 3rd biggest glacier in the world outside of Greenland and Antarctica, where we went snowmobiling… 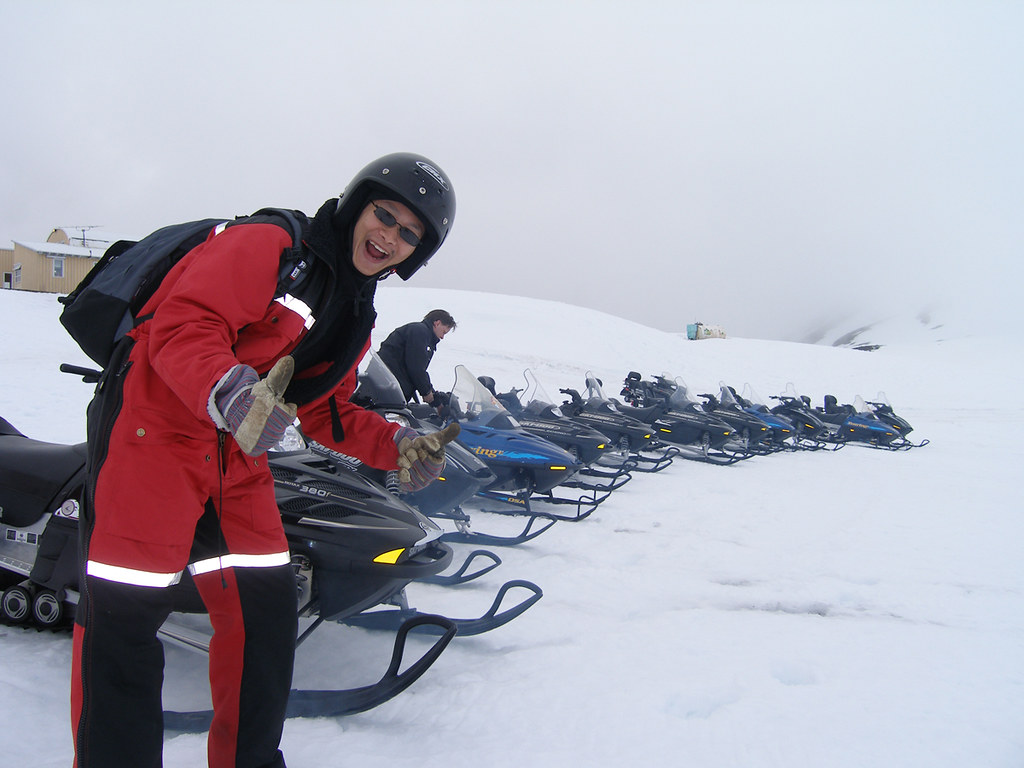 …which by the way, was SO COOL that we are definitely going to buy a snowmobile when we get back home… um… as soon as we work out how many ice cubes and slush puppies it’ll take to fill our back yard…

THEN, we went ice climbing and hiking on the Svínafellsjökull Glacier where they filmed the Nepal scenes of Batman Begins, which again was a great experience, especially since now that we know how to swing an ice axe, ice build-up in our fridge will never be a problem again… 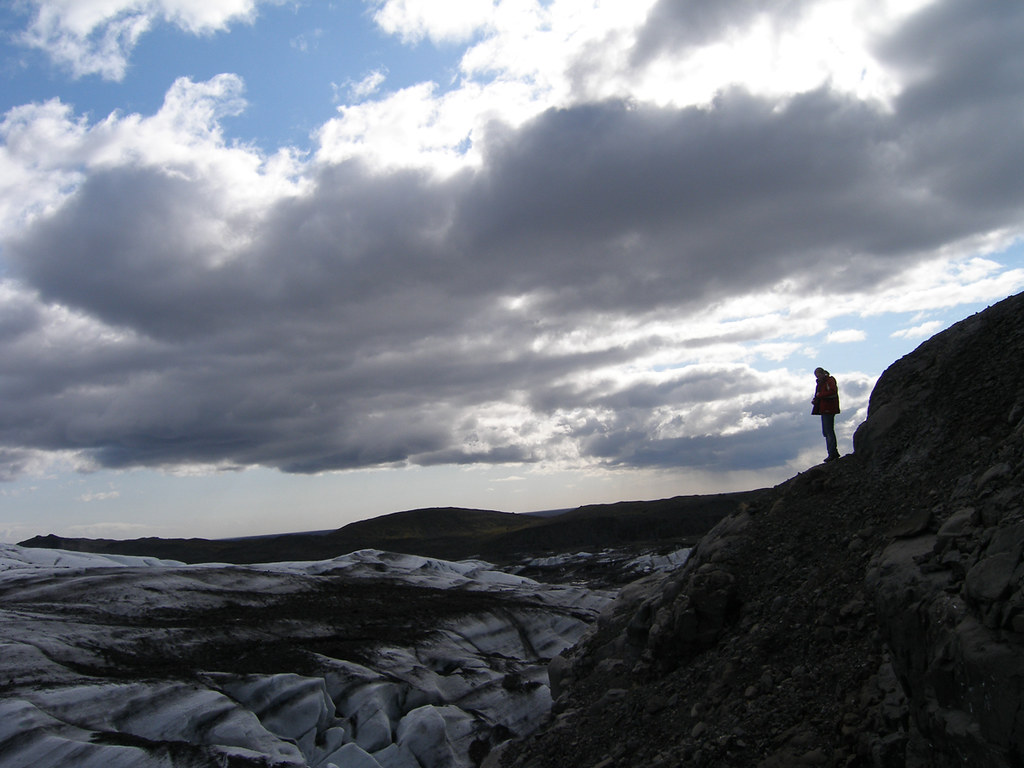 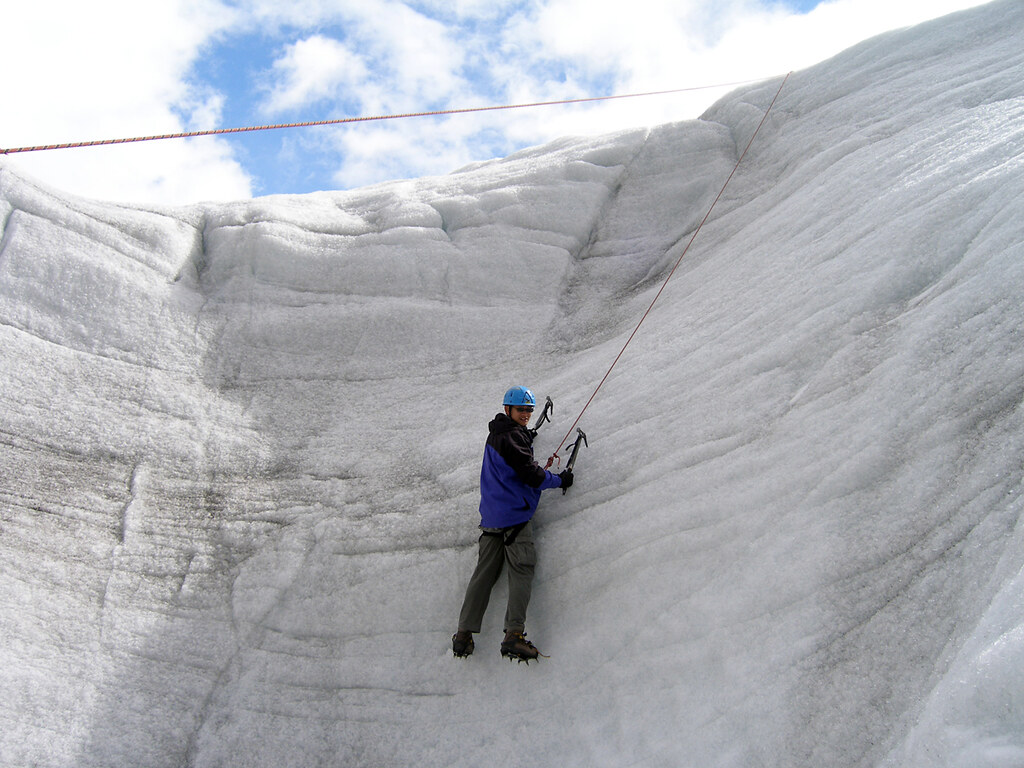 And lastly we went Puffin spotting on cliff overlooking a vast 30km black sand desert created by a glacier that pulverised all the lava rock into sand as it retreated. 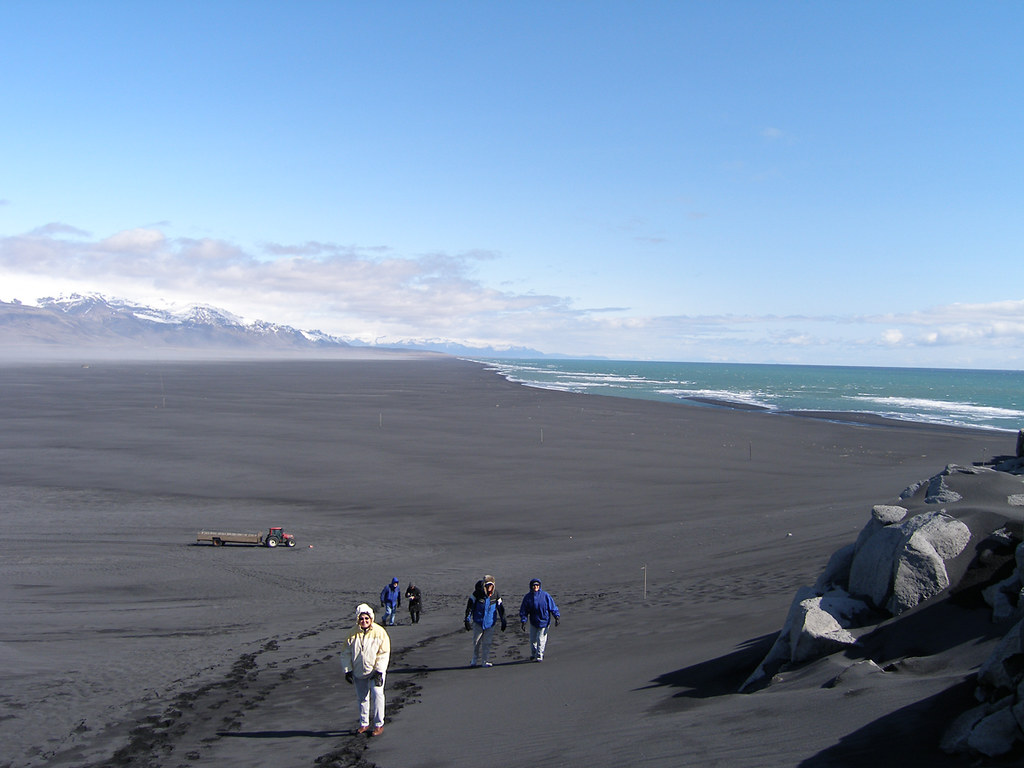 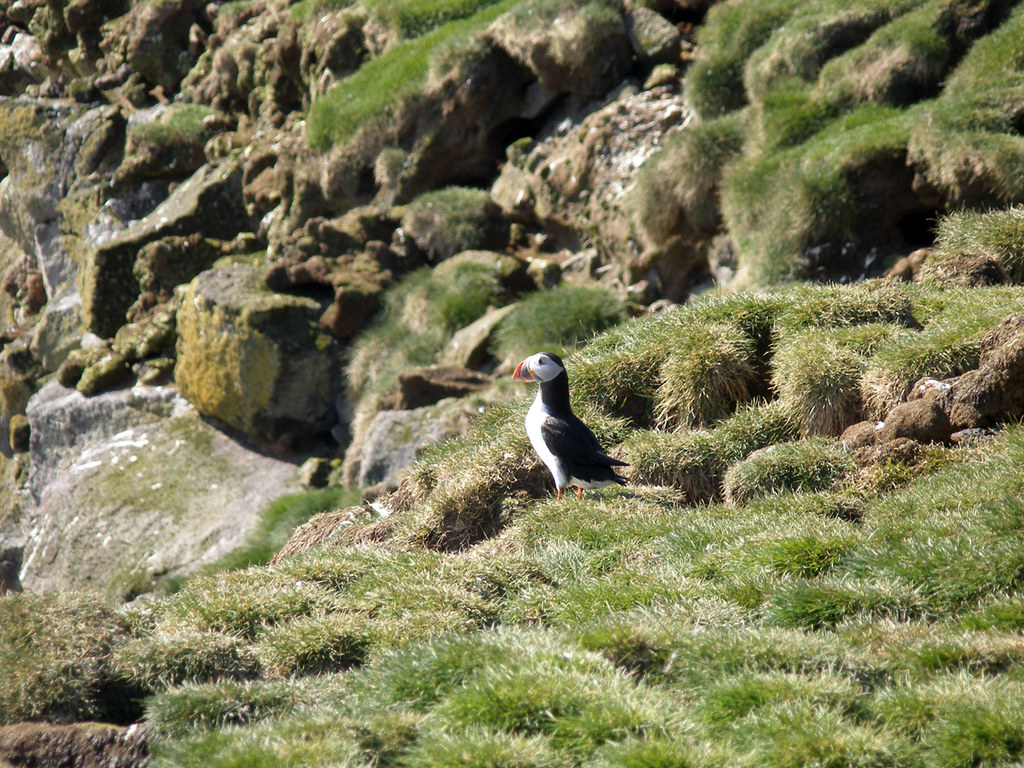 But the most MENTAL thing we did was to go snorkelling in a slowly expanding fissure in between the European continental plate and the American continental plate, which totally BLEW OUR MINDS since we figured that if the tectonic plates shifted, then we would probably get sucked back down to Australia!!!!

MAN… if anyone had said that we’d be snorkelling in our favourite jeans in a dry suit in-between 2 very active tectonic plates in 0 degrees water with 150m visibility all around, we would have said “…You’re Björking MAD!!!” 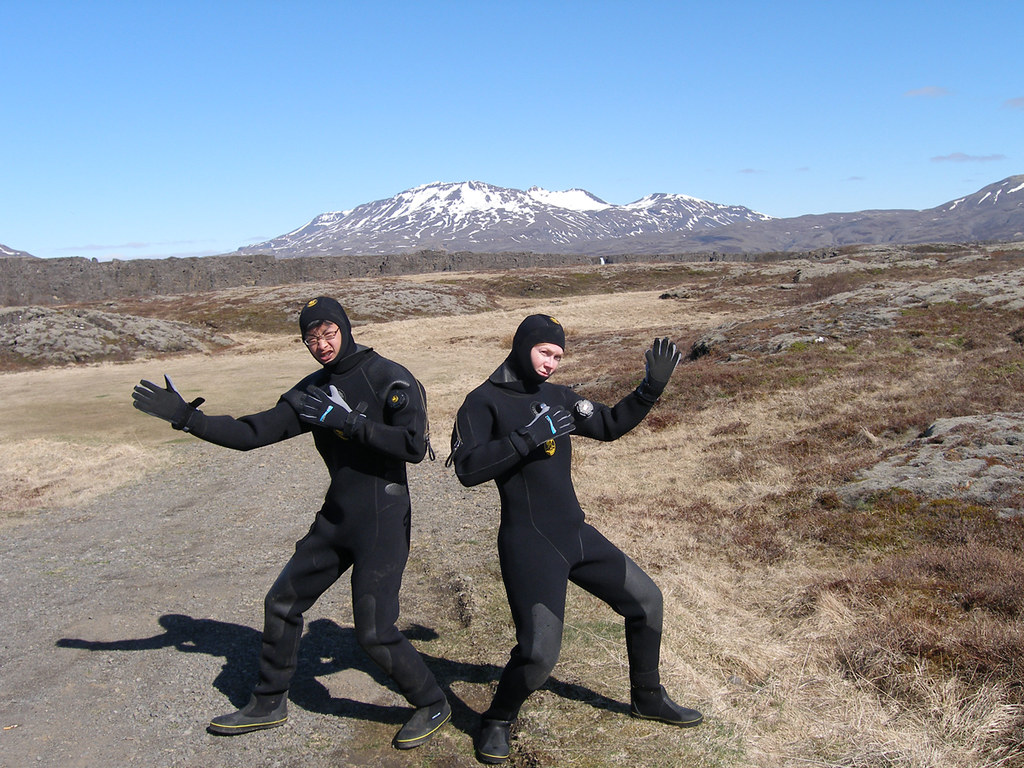 But that’s EXACTLY what we did and we weren’t björking mad… we were BJÖRKING COLD!!!!

HÖLÝ CRAP… If you are a skinny Australian, then NEVER EVER believe a chubby Icelandic person who tells you that you don’t need to wear warm clothes in a dry suit because a dry suit should keep you warm…

It’s a complete LIE and it is definitely FRIGGING COLD!!!!!!!!!!!!!!!!!!!!!! Not to mention that I also had a Micheal Hutchence rubberband around my neck to stop water getting in since I am so skinny, so I was choking the whole time!!!!

Avril actually lost the function of her fingers for over 10 minutes after getting out of the water and couldn’t get out of her snorkelling gear, and I actually don’t know where my testicles actually disappeared to for several hours… 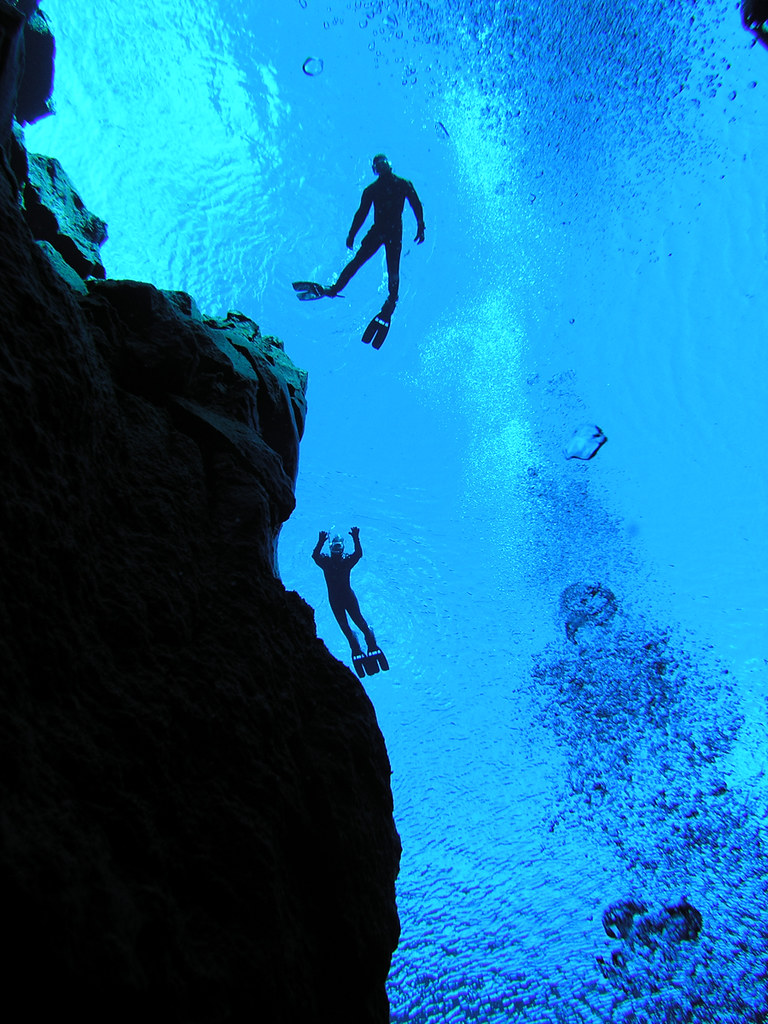 So anyways, we LOVED Iceland and we’ll definitely be back one day with full camping equipment so we can going hiking and see the Aurora Borealis.

This is the link to our Iceland pics if you are bored or want to check out how fast I can jump out of an iceberg lake once the water hit my scrotum.

PS For all of you who have been wondering when we are coming home, I have just finalised my last day working in Ireland as the 10 November and we’ll probably head home over a couple of months so it’ll be some time in the first couple of months of 2007.

PPS. Here are some tips and links to Iceland companies that we used for you guys who said that you are planning a trip there.

Firstly rent a car (€45 per day for a small 4 door)… it’s very affordable and you really need it to fully explore the place. You really don’t need to rent a 4wd as all the 4wd areas eg Landmannalaugar and Þórsmörk, actually involve fjording across flowing rivers and unless you are very experienced it is best to do tours there. Mid May was perfect to go as summer is so crowded that accom is difficult and before mid May, a lot of accom and tourist facilities close down. Bring swimming gear as there are geothermal pools everywhere. Consider camping equipment if you want complete freedom. Most hostels have cooking facilities which is important because eating out is not easy in the rural areas and also expensive. The HI hostels have a very good network in Southern Iceland and were more reliable than farmstays. The best glacier to just park your car and climb on is Svínafellsjökull which is the first left turn past the Skaftafell turnoff when you are going east. It is signposted but the road is a dirt road so not many people find it.
Snowmobiling: www.glacierjeeps.is
Snorkelling: www.kafarinn.is
Glacier Hikes and Ice Climbing: www.mountainguide.is