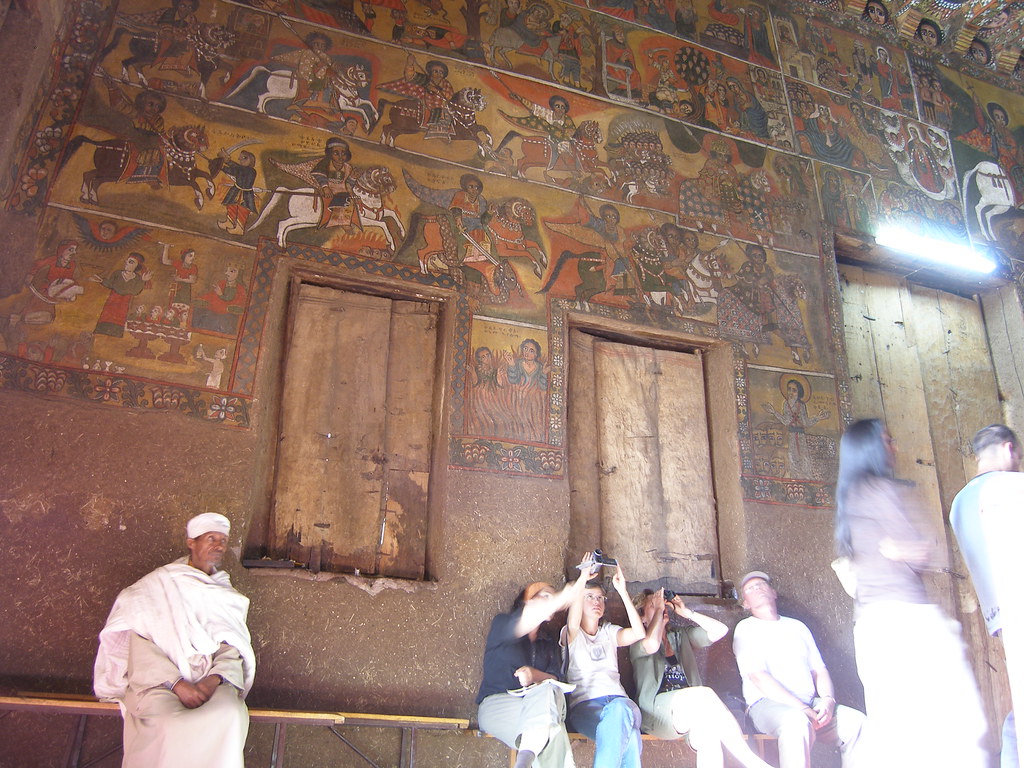 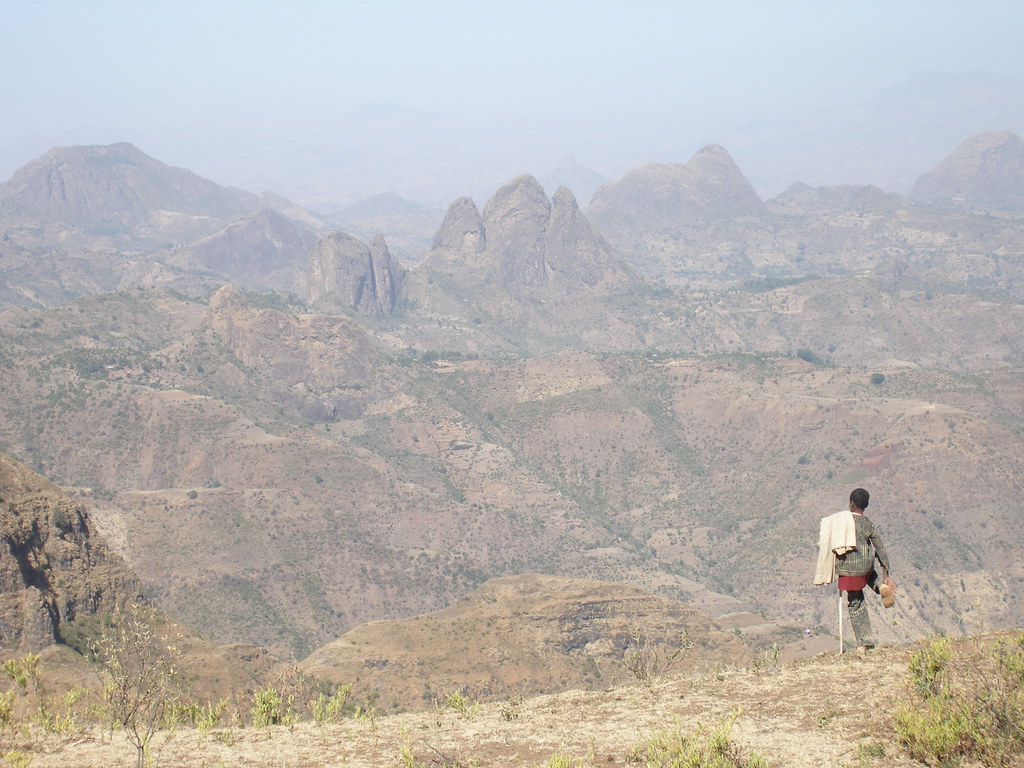 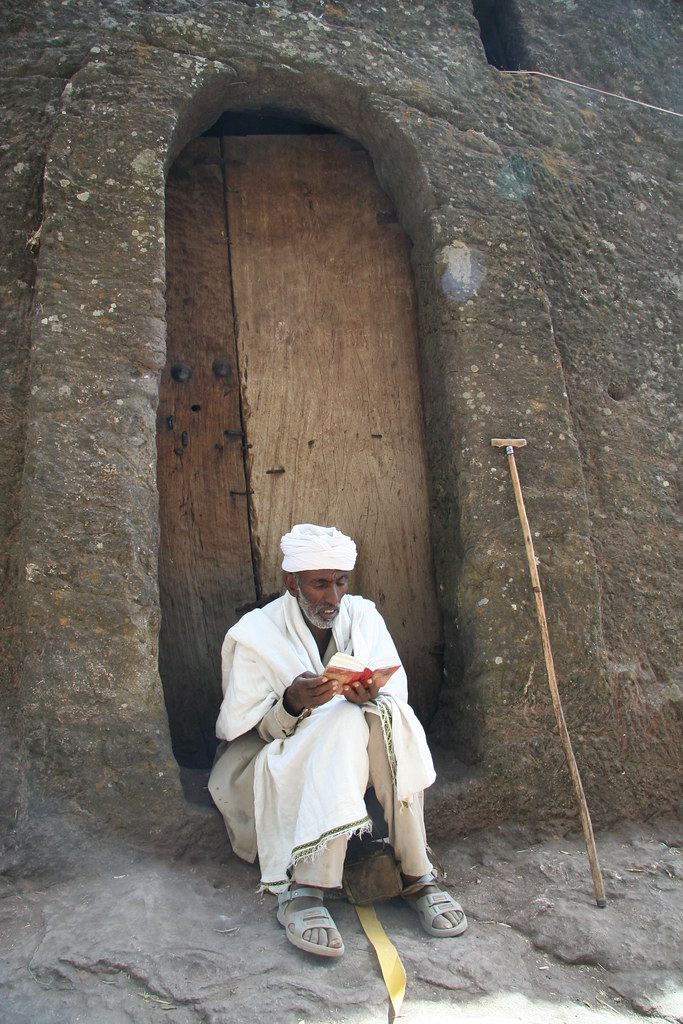 Salaam to all you funky chickens

Well, we are currently back in Addis Ababa after bumming around Northern Ethiopia and I’ve got to say… it’s really nice to be back in a big city, since travelling around the north of Ethiopia was actually quite tiring due to the amount of hassles we encountered.

Like we mentioned in our last blog, Northern Ethiopia is famous for its Historical Circuit which is very much based on a lot of biblical history… but compared to the amazing south, the reality of the tourist sights isn’t anywhere near as interesting as the history would suggest.

In fact we decided to skip the town of Axum where the Ark Of The Covenant is meant to be held, since it is apparently a dusty old town with not a lot to see there, and they don’t let you near the church where the Ark is meant to be anyway… which is probably good since we didn’t want our faces melted off like those Nazis in Raiders Of The Lost Ark.

So instead, as we mentioned in our last blog we started our trip in Lalibela, which was the town where there are amazing rock churches carved 10 stories down into the ground…

And thanks to everyone who wrote back saying that they pissed themselves laughing that I had shat on someone’s grave… It’s all funny until someone loses a sphincter! However, as you know, I write “Holy Shit” a lot in these blogs, but now I feel I can write it with credibility!

Anyhows, after Lalibela, we then headed out to Gonder which other than being suspected to be the location of the mythical lands of Prestor John from the Middle Ages, it is also a town known for some impressive 17th century European castles which look totally out of place in Sub Saharan Africa.

And it’s also the starting point for trekking in the famous Simien Mountains… although we felt that trekking there was a bit overrated compared to trekking in Nepal and South America.

…And of course it is likely that Gonder served as the inspiration for Tolkein’s realm of Gondor in the Lord Of The Rings as well, which is WAY cool as well.

From there, our last stop was the city of Bahir Dar on Lake Tana which is the source of the Blue Nile that joins with the White Nile in Sudan to eventually form the Nile river in Egypt. Apparently the area was famous in Biblical times as it was thought that mystical city of Ghion was situated here, and today it is famous for heaps of monasteries that are built on islands around the lake.

However, we were in such a foul mood by the time we arrived, that we really didn’t feel like seeing any tourist sights… so this is where I have a whinge!!!

Now as you probably realise, we have been VERY impressed with Ethiopia since the country is probably THE most interesting place that we have ever been to with respect to its amazing history and sheer diversity of attractions… and we would thoroughly recommend a trip here to anyone, especially to the south.

But on the ugly side of things, we totally found that in Ethiopia we were hassled the MOST out of any country that we have been to.

Before we came here, we had read stories about kids just yelling out “Fuck You” to foreigners in the streets and also lots of stories about kids throwing rocks at tourists… And although we only had “Fuck you” yelled at us once from a 5 year old kid and we only had one rock thrown at us, it was still very indicative of how this new generation of Ethiopians see foreigners with contempt.

In fact we met several cyclists who were doing the Cairo to Cape Town cycle, who had massive bruises on them from kids who threw big rocks at them as they were cycling by.

Now seriously, in my book, that is just FUCKED!!! Ethiopia is certainly a poor country, but compared to West Africa, they have it pretty good, so I don’t think poverty is an excuse here for such violent behaviour from kids. It’s more about the lack of respect they have for foreigners.

And to be honest, looking at the generation of kids who are causing all the troubles, most of them are young kids up to the 20 age group and my personal opinion is that I reckon that this is a direct NEGATIVE  result of aid being improperly dumped on them since the famine in the 80’s.

They seem to now have an entire generation of kids that are dependent on handouts and who only see foreigners as being a source of money to beg or scam from.

Now, most African travellers will tell you about how it sucks being treated like a cash cow, but I would say Ethiopia is the worst African country that we have been to so far for this, which is surprising since the West Africans are a lot poorer, but are nowhere near as bad as the Ethiopians in behaviour.

In fact, the kids and teenagers basically have no shame in walking up to you on the street expecting money, and when you say “no” they actually sulk and carry on. And it really gets tiring walking along the street and every 5 minutes someone is yelling out “You, you, you… money.”

And although this may be a very non-politically correct thing to say, I personally think the sponsorship thing like you see advertised in World Vision ads etc, has added to the problem.  Many kids we met would proudly say that they had a sponsor in Australia, and then request that we give them money too. It has really put me off sponsoring a child now.

Anyways, the reason why I am having a whinge is because as experienced as we are at travel, we got scammed by a teenaged kid working at our guesthouse who I paid to organise transport for us. But when we arrived at our destination, the driver told us that he hadn’t been paid, so the kid obviously had kept the money for himself.

Well, this ended up in a bit of a street fight with me and the driver yelling at each other, and eventually, this got a bit physical. Well, inevitably we ended up at a police station trying to get the police to mediate, but they told us that they were too busy, so we should get a local to ring the hostel where the boy worked and pretend to be a police officer to scare the kid into paying up.

FRIGGIN’ HELL… how weird is that for a police guy to tell you to impersonate a police officer!!!!

Anyway, it worked but I was so pumped from the physical confrontation that I have been stewing for days, which is a really sucky way to finish what was otherwise a really fantastic trip!

But anyhows, enough whinging, we are now in Addis which is perched high up in the Ethiopian highlands and is the 3rd highest capital city in the world at 2800m, so it is actually quite a pleasant city since it’s not too hot… And surprisingly, it is really clean and modern for an African city that we have always imagined to be really poor.

Not only that, but as an interesting bit of trivia, Addis owes it’s survival to Australia since back in the 1800’s the King of Ethiopia was going to move the capital to another location since they had used all trees for fuel. Apparently some Greek or Italian businessmen then brought some Eucalyptus gum trees to Ethiopia and these were so fast growing that the King decided to plant these all over the place for fuel which then saved Addis from being moved… Man… How cool is that??!!!

Still, it was a bit weird hanging around Addis and getting the smell of gum trees everywhere, but not seeing any koala bears or drop bears…

Anyways, tomorrow we are on a flight to Arusha in Tanzania to start a 7 day safari, so we may be out of touch for a while.

PS. We have now loaded up our northern pics with the cool rock hewn churches at Lalibela, trekking in Simien mountains, Gonder and Bahir Dar so you can click here if you are bored.

PPS. Hey… I just thought about this… Addis Abba would be a REALLY cool name for an Ethiopian Abba cover band… hmm… I obviously have a lot of time to think of silly wordplay while on long bus rides!!!