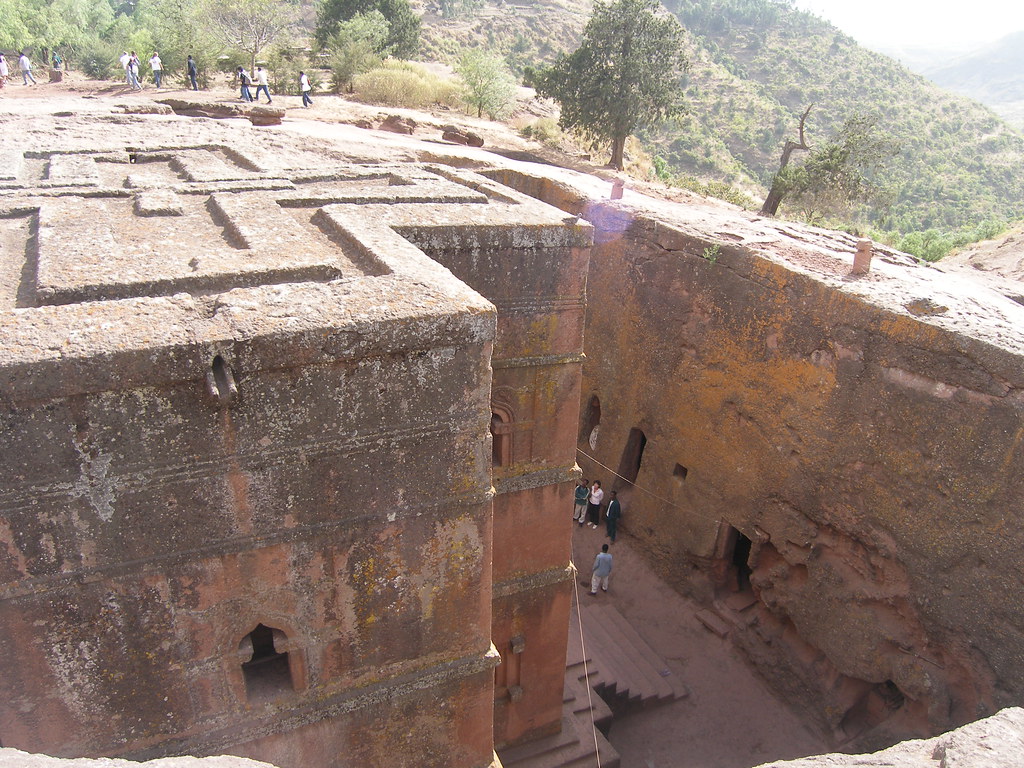 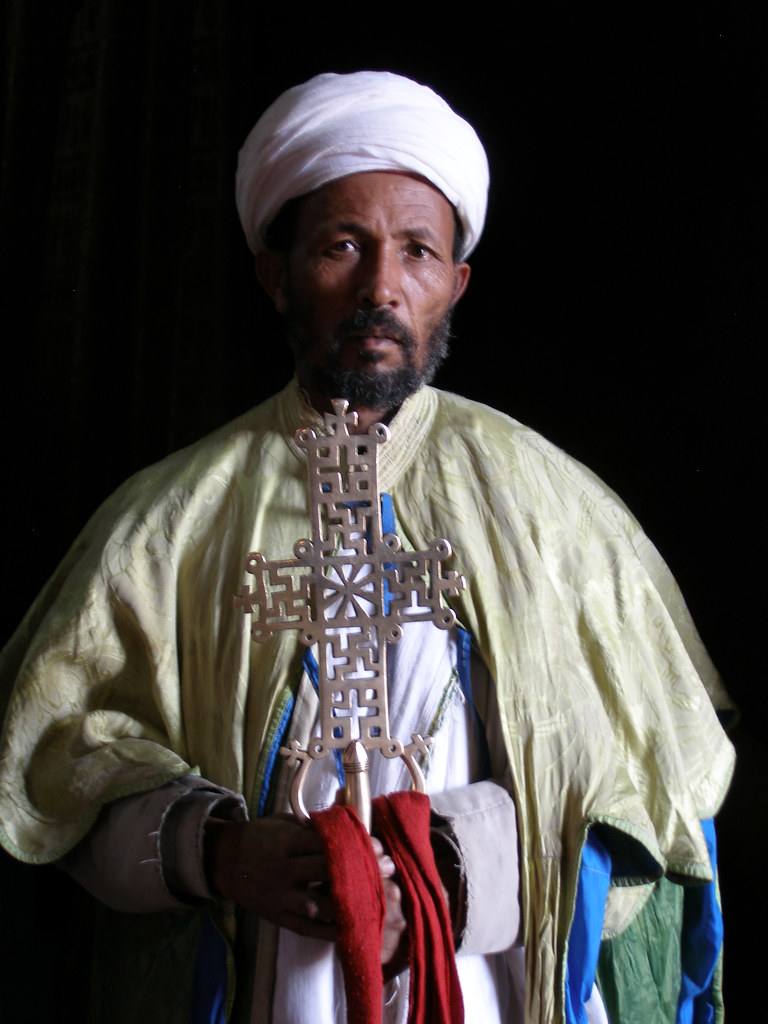 Well, we are currently sitting sipping macchiatos surrounded by Jacarandas and Olive trees in the Seven Olives Hotel in the famous village of Lalibela on the Historial Circuit in Northern Ethiopia… And Man… today I did one of the most sacreligious things EVER!!!

Now firstly, I’ll have to paint a picture of how religious it is up here since the northern part of Ethiopia is COMPLETELY different to the tribal south and there is a well defined pilgrimage trail based around the wealth of cultural and religious treasures that trace the area’s history through the ages spanning back to biblical times. 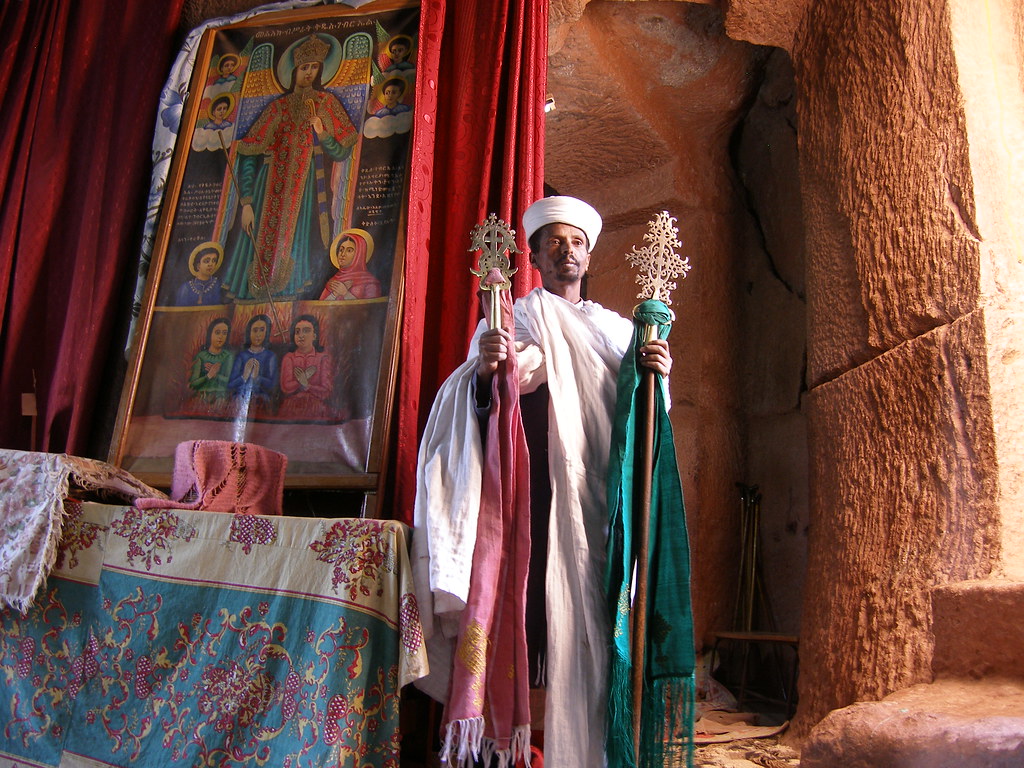 In fact, Ethiopia is probably the only country in Africa with such an abundance of religious history as it lies at the crossroads of the Coptic Church, Christianity, Judaism and Islam.

In researching our trip here, we were absolutely stunned to find how much popular history actually originates from this area, especially since before we came, the only things that we knew about Ethiopia were the famine and that they have great long distance runners.

Firstly, Lucy, our oldest known ancestor at 3.5 millions years of age was discovered just north of here in the Danakil area, so that in itself is really cool.

But even cooler is that this area is known throughout biblical times as being the home of the Abyssinians and Axumite peoples.

In fact, the Ark Of The Covenant which contains the 10 Commandments is meant to be stored in a small church in Axum a town just north of here, after it was moved here from Jerusalem in about 700BC.

Apparently the Ethiopian Queen Sheba who is a direct descendent of Noah had an heir with King Solomon of Jerusalem, and their son became the first king of Ethiopia and his lineage has ruled Ethiopia for 3000 years ending only with King Ras Tefari in 1975 who is now the figure head for the Rastafarian church!!!

Holy SMOKES… How FRIGGIN COOL a history is that for a country to have!!! Man… I totally am going to have to get myself an Indiana Jones hat to wear up here!!!

Anyhows, like we mentioned, we are currently in Lalibela which is the second most Holy place in Ethiopia and famous for its rock hewn churches that have been called the 8th wonder of the ancient world, and are often likened to Petra in Jordan. 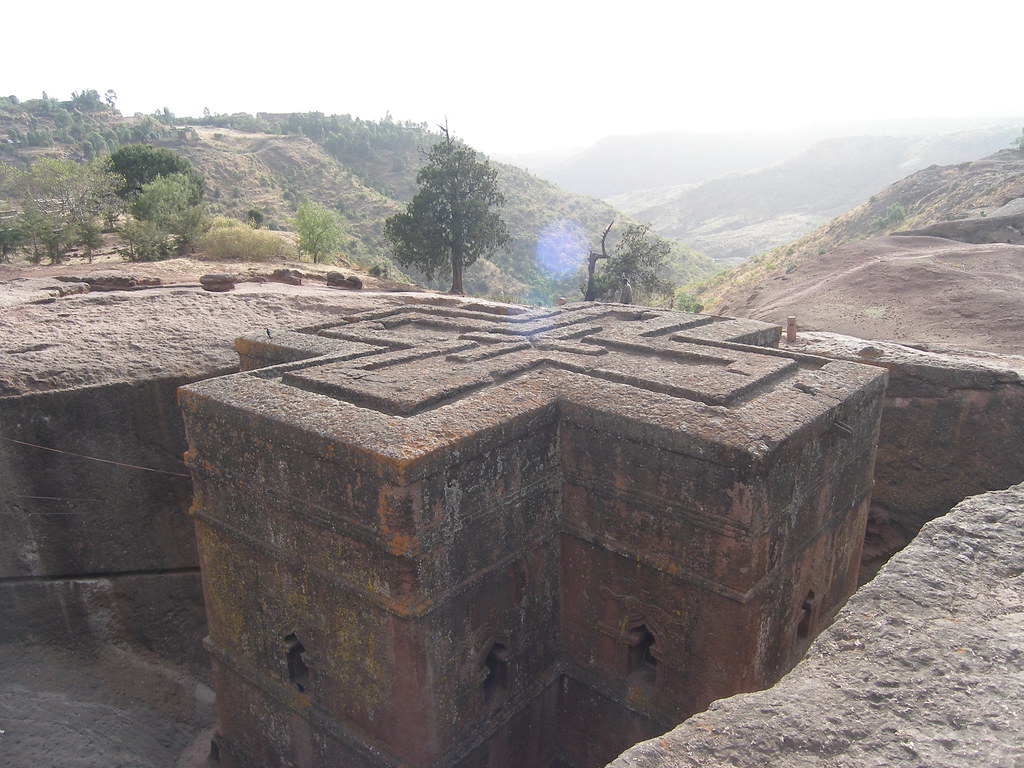 Now although we doubt that they would on par with Petra, these churches are still pretty DAMN impressive!!! Man…. These churches are amazing and are literally carved out from the the rock ground as free standing monoliths, and some are up to 10 stories deep into the earth!!! 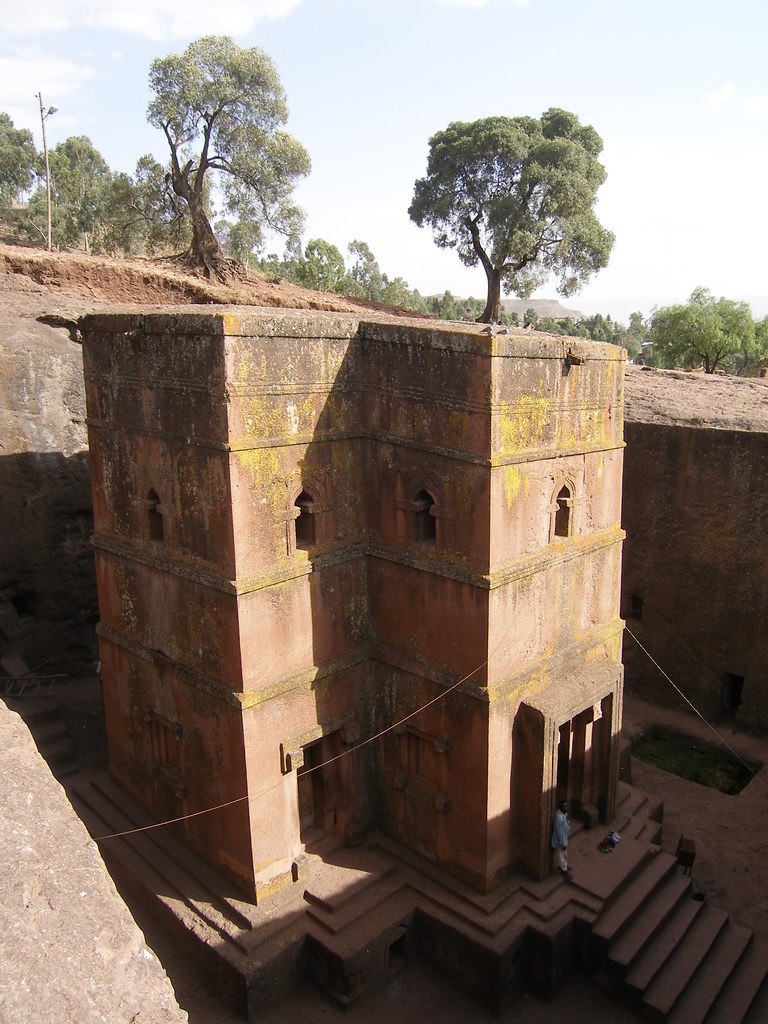 All up, there are a couple of clusters of up to 10 churches all dating back about 800 years, and they are filled with religious artifacts and tendered by priests and pilgrims who still actively worship in the churches even today.

Well, we had spent the last 2 days exploring all the churches and this morning just as we were about to enter the second last church, I developed some major diarrhea feeling bowel cramps.

Now since we were at least a 15 minute walk from our hotel which would have been even more uncomfortable since we are at 2600m altitude, there was no way I was going to make the walk back!

Well of course I tried to hold on, especially when the only toilets are holes in the ground literally on the footpath where heaps of people just walk past you, but I soon  got that terrible crampy feeling that you get when you know that you can’t even fart without achieving mud!!!

Needless to say, our guide picked up on my discomfort and directed our shoe guy (dude who watches your shoes when you are in the church) to take me to a secluded area in the field so I could relieve myself. 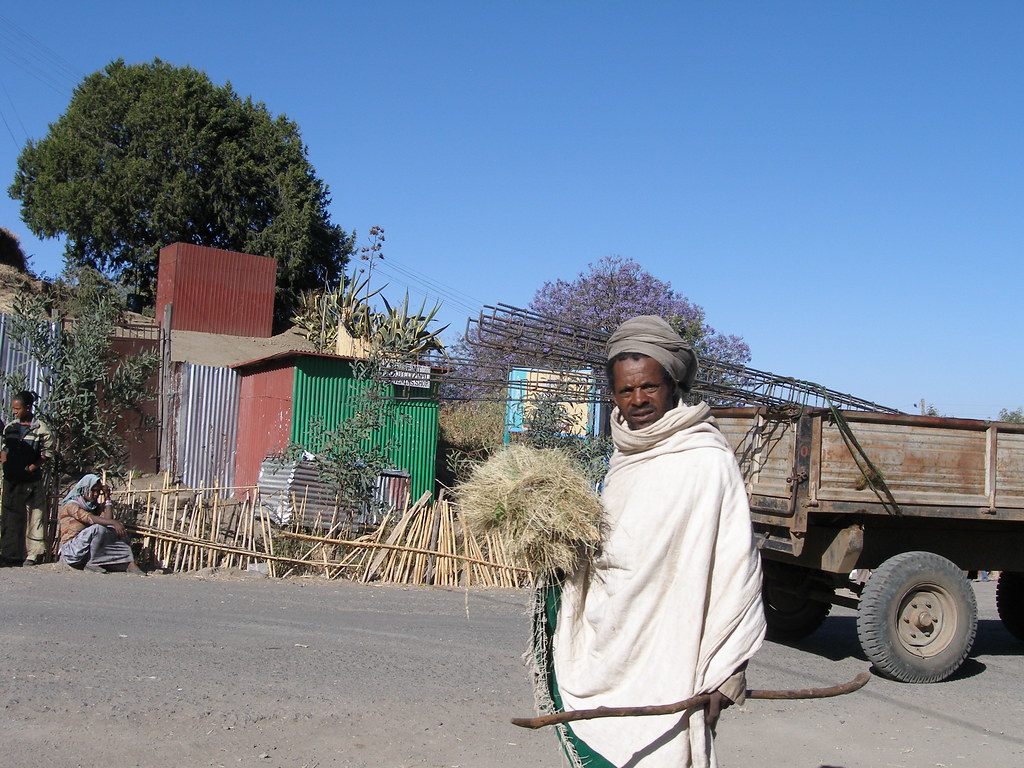 Well, I followed the guy and I could see he was trying to work out where the most private place to take me would be, when eventually, we climbed over a ridge next to the churches and he pointed to a grave yard on the outskirt of the complex.

HOLY COW!!! Now I did actually ask him was he sure that was OK to take a dump in a cemetary, but he nodded that it was fine and by then, I was in no mood to argue.

Well, walking over the crest, I found a barren patch of dirt inbetween graves and protected by a little barrier of tall cactuses, and HOLY SMOKES, I think I dumped about 2kgs in about 5 seconds… Oh YEEAAHHH… AAAAHHHHHHH!!!! Don’t giggle… You all know what it’s like!!!!

Anyways, very pleased with myself, we hiked it back to the church where Avril told me that they had been waiting to find the priest to let us into the locked church because apparently he was off preparing for a funeral.

Now it really didn’t click at the time, but it wasn’t until we were walking to the last church right past the graveyard, that I realised what I had done…!!!!

SMOLEY HOKES… as we were walking up the ridge towards the last church, I looked over to the graveyard and was HORRIFIED to see the gravediggers digging up that little barren patch of land that I had crapped on, for the NEW GRAVE of the NEWLY DECEASED PERSON!!!!

FRIGGIN HELL… I had TOTALLY taken a dump in that poor person’s newly dug grave… NOOOOOOOOOOOOOOO!!!!!! Man… How FREAKED OUT sacreligious is that!!!!!

HOLY CRAP… I was so embarrassed, that all I could do was let out a snorty gag, and then I just had to stop and tell Avril the story because I felt so bad…

…Actually, I only wrote that I felt bad just to sound mature… In actual fact, I’ve been giggling my arse off for days…

Anyways, if I don’t make it out of Ethiopia alive, it’ll probably be because some Zombie Ethiopian has tracked me down and eaten my brains just for dumping a nard on his grave…

Well off to Gonder tomorrow, so we’ll blog again soon.

PS. We haven’t had time to upload our Northern pics yet, but here is a link to the remainder of our southern Ethiopia pics including the Hamer people, The Arbore tribe and the Dasanech tribe who live in the most inhospitable area of the Omo Valley that we have been to.