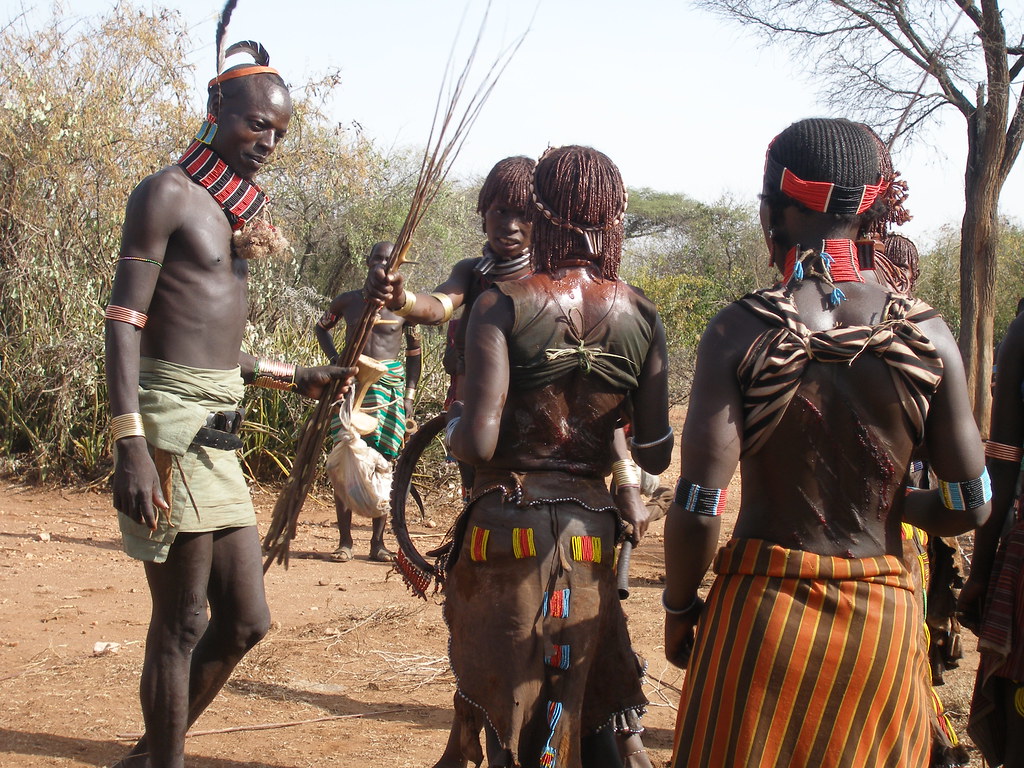 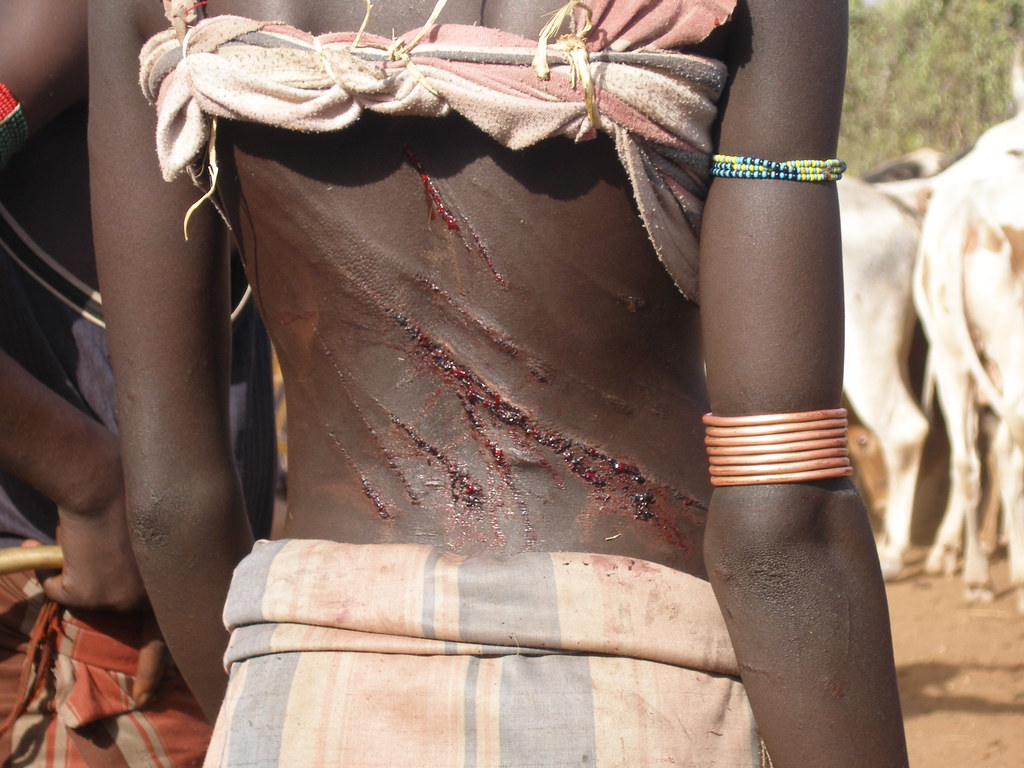 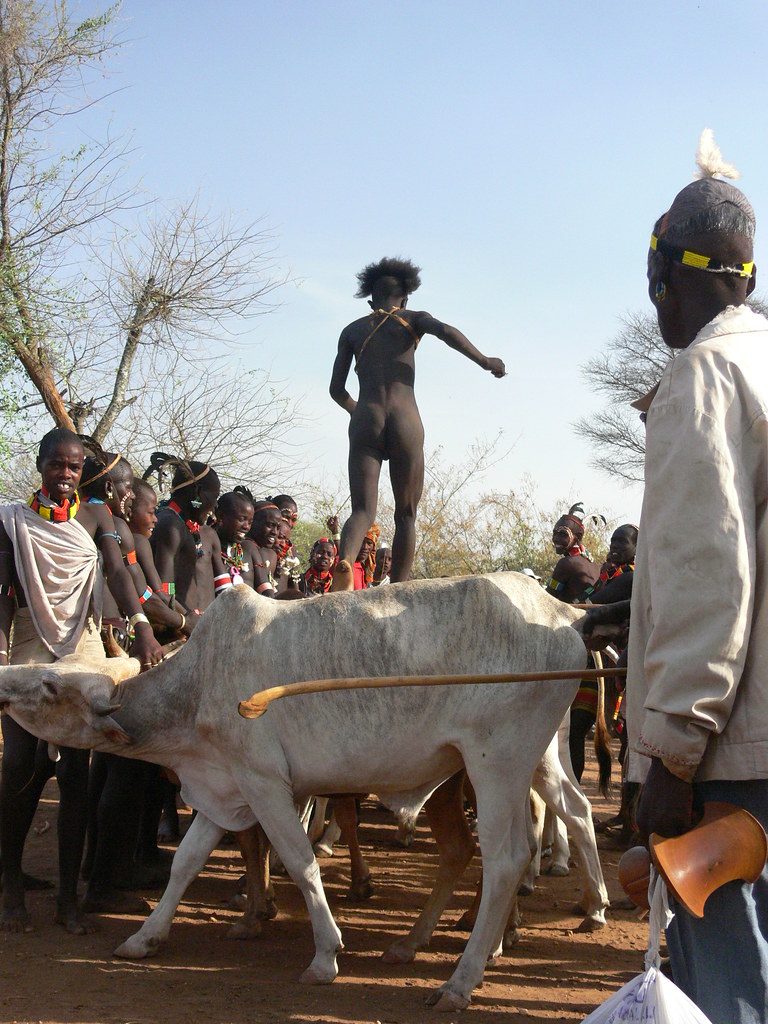 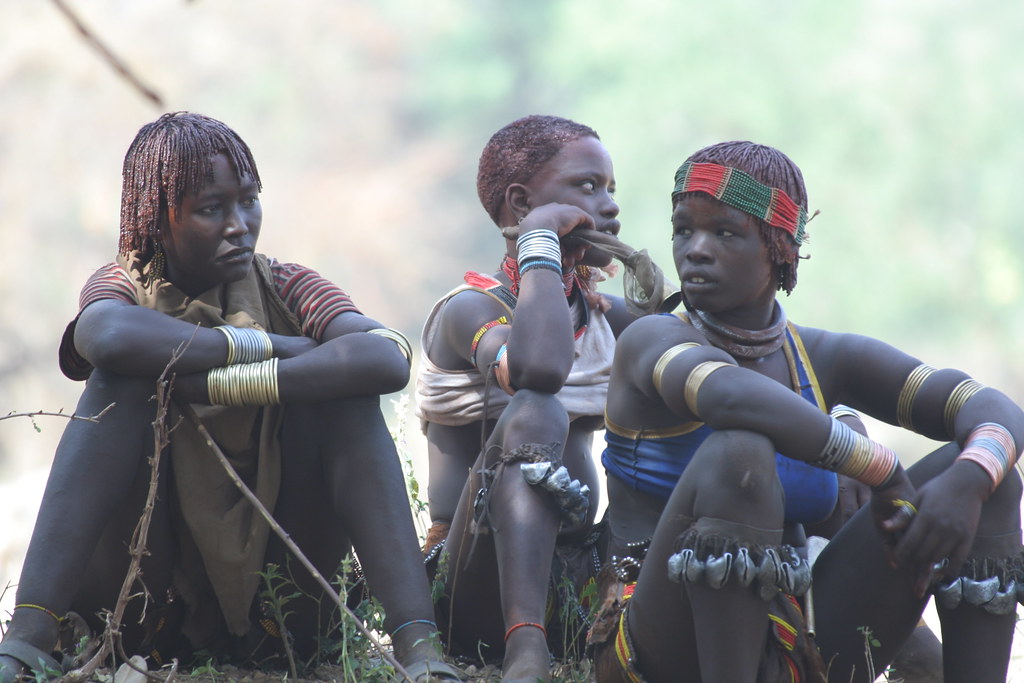 Ashamaa to all you crazy cats and jumpy bulls

Well, we are now back in Addis Ababa after our FANTASTIC journey through the South Omo Valley, and all we can say is that this trip has been one of the most AMAZINGLY cultural experiences that we have ever had… on par with even the Festival Au Desert in Timbuktu that we did last year.

We ended up travelling for 8 days through dust storms and the desolate parched country side dodging cows, goats and kids… But it was worth it since we managed to see 9 different tribes, and completely by luck, we actually got to see the famous BULL JUMPING CEREMONY Of The Hamer Tribe!!!

Man… we were attending the local market of the Hamer tribe in a small village called Dimeke when our driver Mickey heard that there would be a Bull Jumping Ceremony that afternoon.

Well we were completely over the moon as it is one of the most exotic, vibrant and BRUTAL ceremonies that you can attend, and most tourists hope and pray that they will come across one whilst down here. In fact it is only held at certain times per year and only on weekends at that, so we were pretty damn lucky to have come across one.

Basically the Bull Jumping Ceremony is the initiation rite of a teenage boy of the Hamer tribe, and it has been the subject of many documentaries as part of the ceremony involves the brutal whipping of the female relatives of the boy with the aim to get as many scars on the women’s back as possible!!! 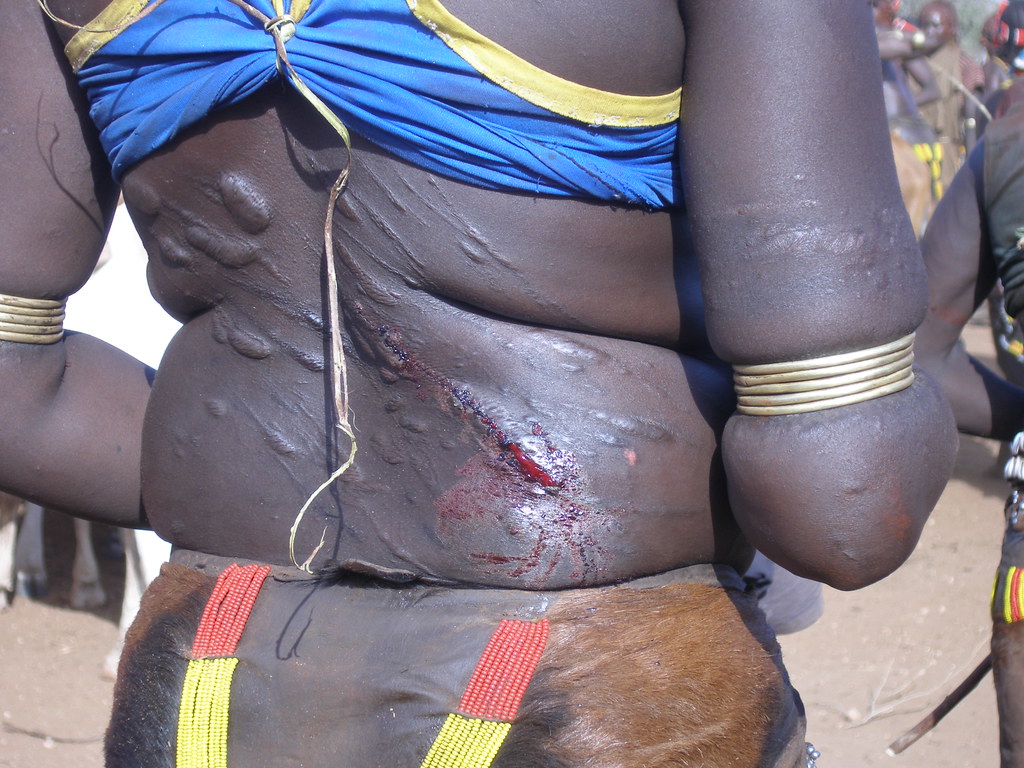 Now apparently the ceremony is the culmination of 3 days of festivities, so we only got to see the last 4 hours. We were lead down to a dry creek bed, where the Hamer women of all different age groups were jumping up and down and chanting to the blowing of horns and the clanging of metal rattles. 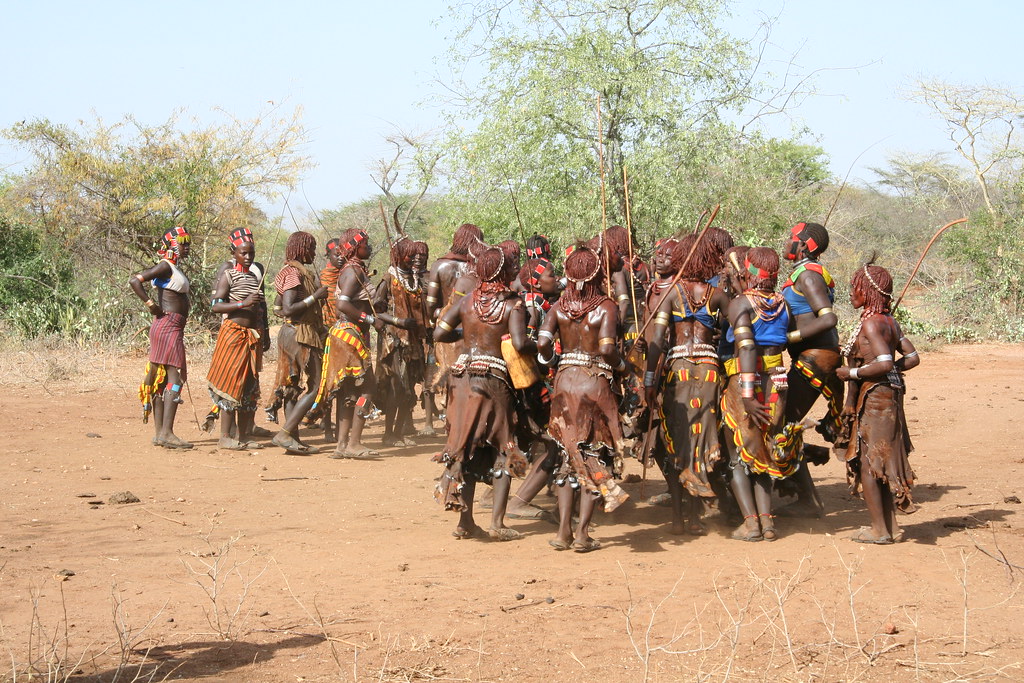 This went on for over an hour as the men huddled under a tree and painted each other whilst other women went out looking for long branches to act as whips. 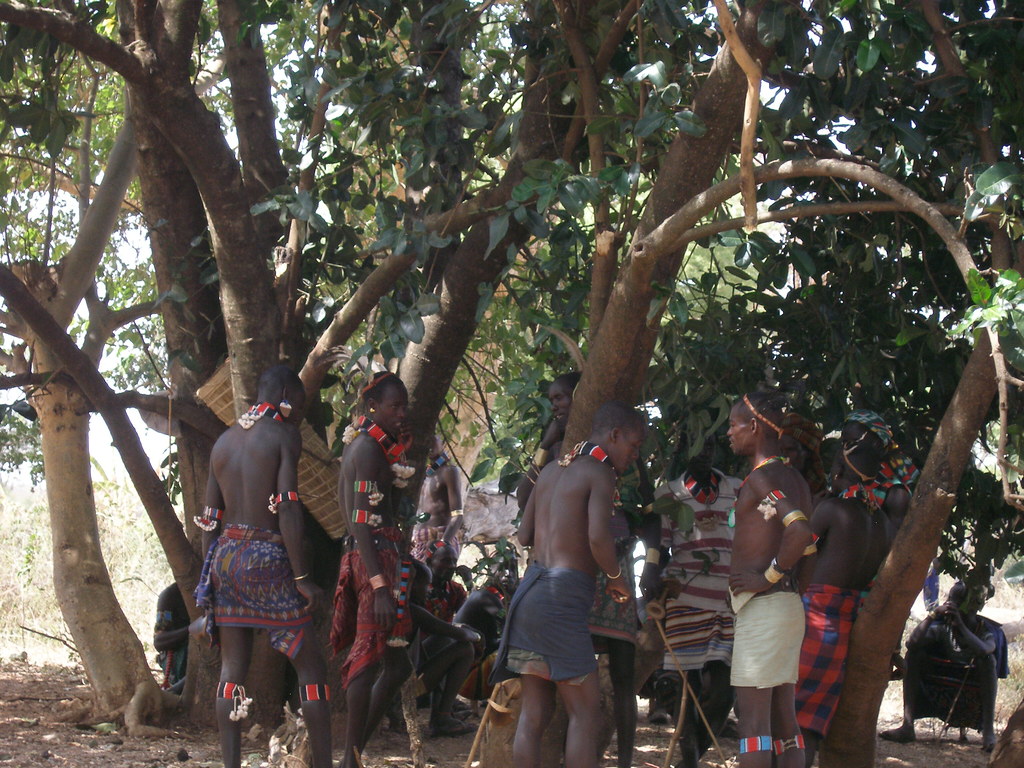 Once the whips were chosen, each man was given a bundle of them and the women then danced around him begging him to whip them!!!

HOLY COW… it was completely BIZARRE and possibly one of the most confronting things that we have ever seen!

Apparently the guys with the whips are actually the brothers of the women who are getting whipped, and the more scars that a woman has, the more it raises her social status in the tribe as it shows how devoted she is to her family!

Well, basically the guys with the whips end up getting danced around by the women begging to be whipped, and of course when they pull away as they don’t want to whip their sisters, the women then go running after him to force him to whip them!!! 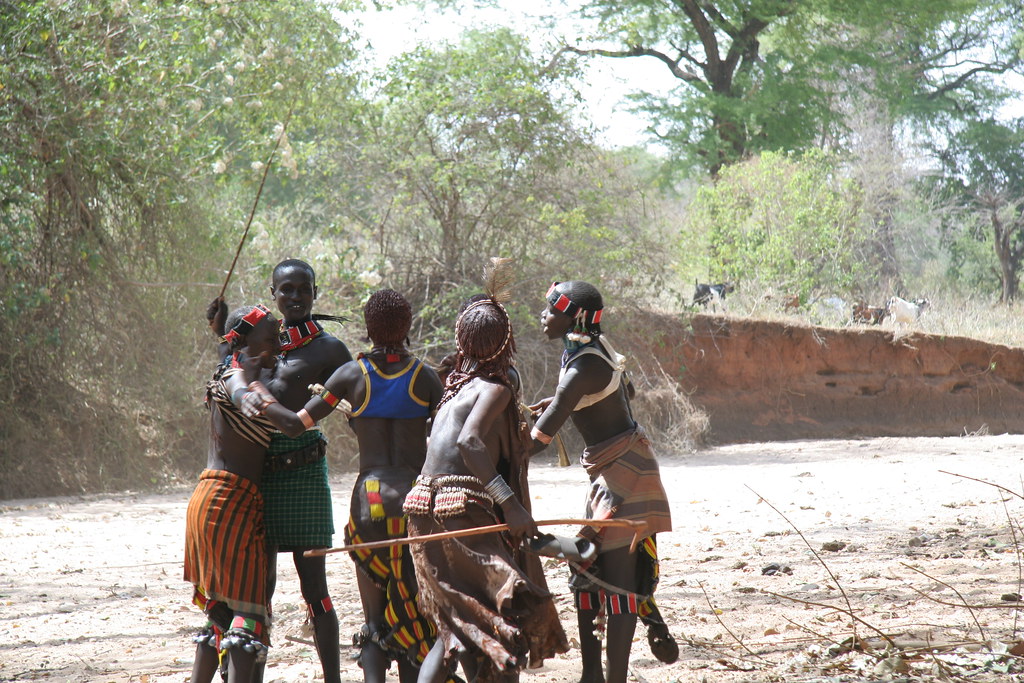 In fact most of the times, the guys look really reluctant to go whipping their sisters and they just want to sit down with the other guys, but the women literally dance around him in a group and hassle him until he whips them. 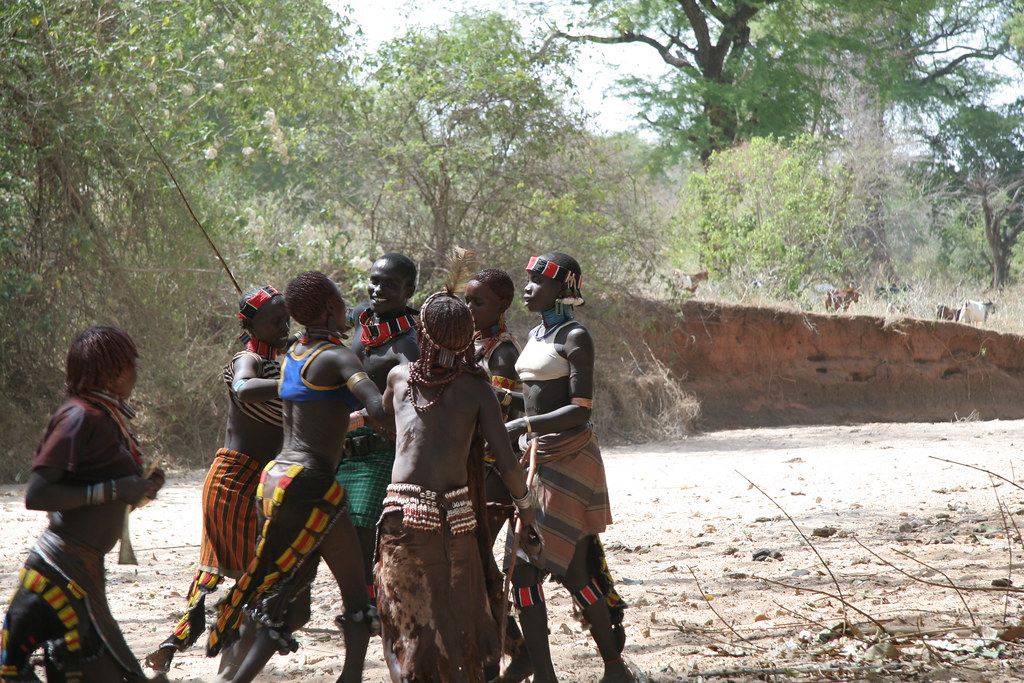 …AND THEN, not just satisfied with one whipping they chase him as he goes running off and hassle him again until he whips them again! 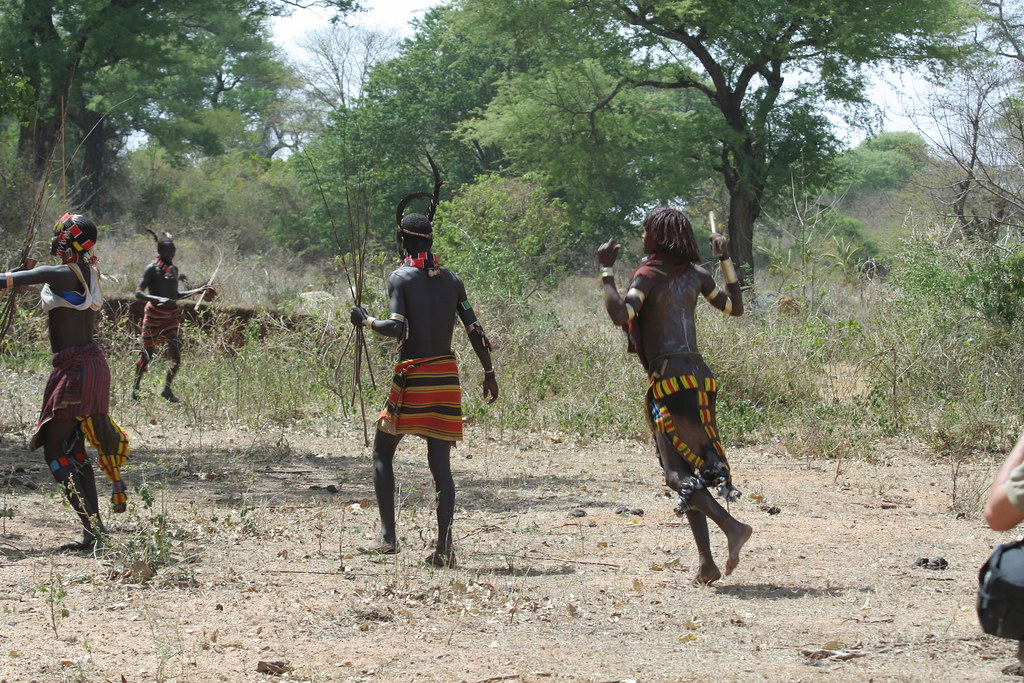 Now, as a tourist, we were lucky enough to be in the middle of all of this, and I can safely say that those Hamer women are FRIGGIN TOUGH!!!!

I was standing right next to a girl who got whipped and the crack of the whip was so loud it completely made me jump… And yet the girl didn’t even flinch… to the point where I thought it may have been faked.

However, it was pretty apparent that it wasn’t faked since after an hour of this, most of the women in the tribe had blood dripping from deep wounds on their backs! OUCH!!! 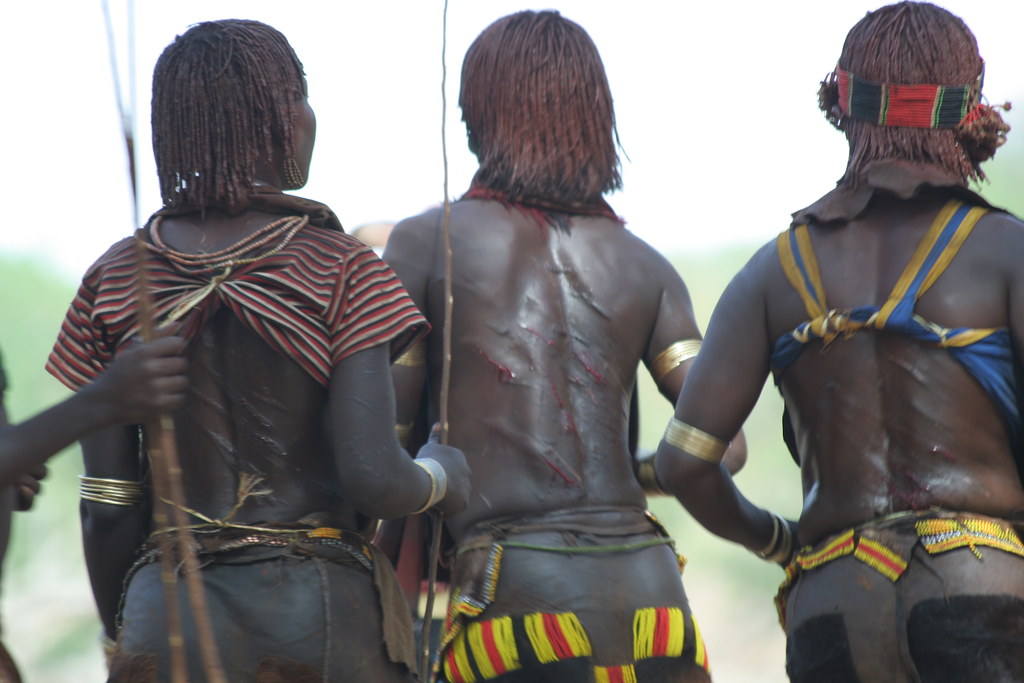 In fact the ceremony was so confronting, that a few of the women tourists were actually quite disturbed by it all.

And even for us, it was one time when we really had to suspend our own western sensibilities and accept that this ritual was not actually a demeaning event for the women, but in actual fact a way of showing how STRONG they are!!!

Like the Mursi women with the big lips in our last blog, the Hamer people are actually well known for also doing body mutilation and most of them practice scarification as a form of beauty. In fact most of the men and women have patterns of scars around their face and backs made with razor blades… AND not only that, but they also rip out their teeth as a form of beauty as well!!! Double YEE-OUCH!!!

So as horrific as it sounds, the women actually really looked like they had a fun time as you’ll see in the photos. In fact as the ceremony progressed, they really seemed like they had really worked into a frenzy and there were a few of the women who were wild eyed and jumping around erractically like they were on a high!!! 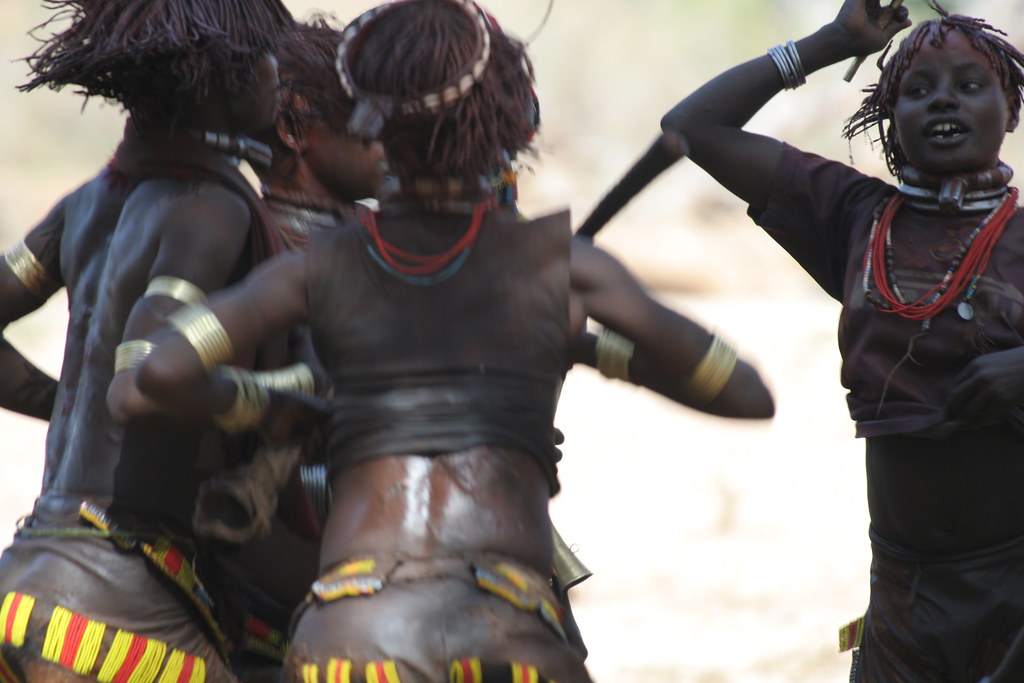 Anyways, the ceremony ended with the men grabbing a heap of bulls together and the initiate boy was then stripped naked and had to jump and run across the backs of the bulls repeatedly without falling off otherwise the women would then get to whip him. 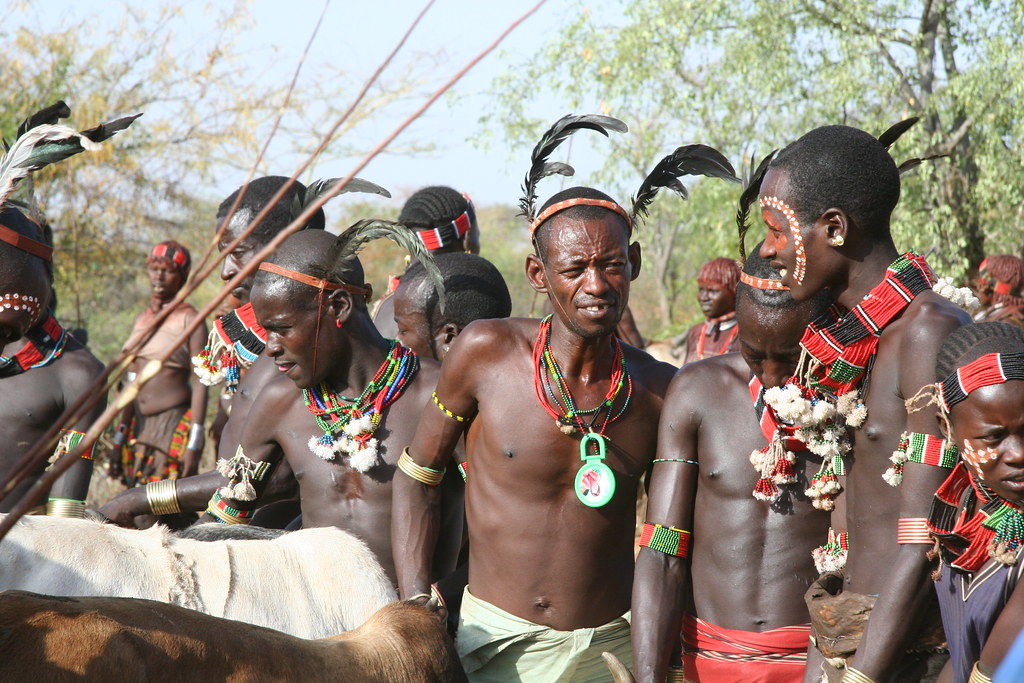 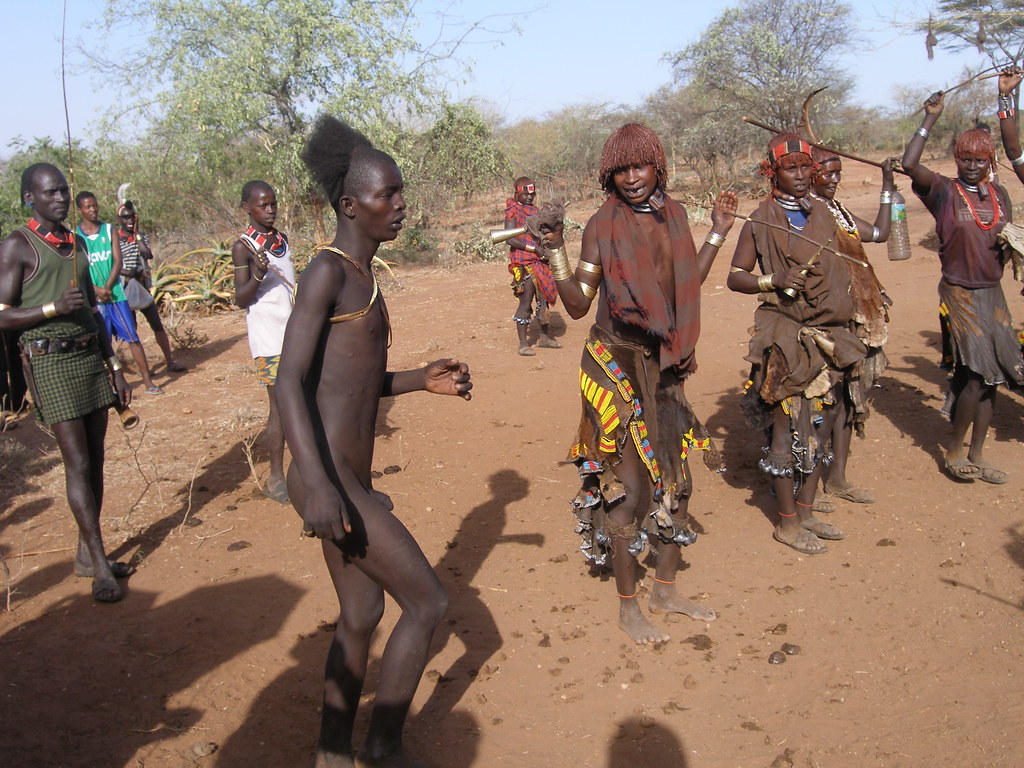 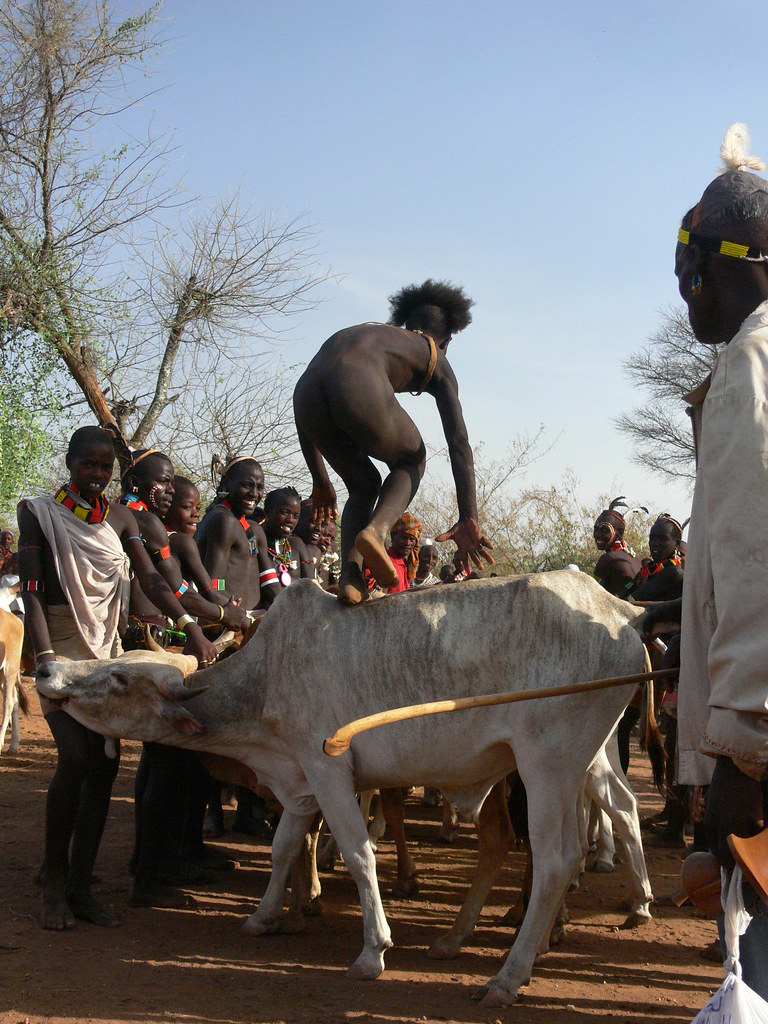 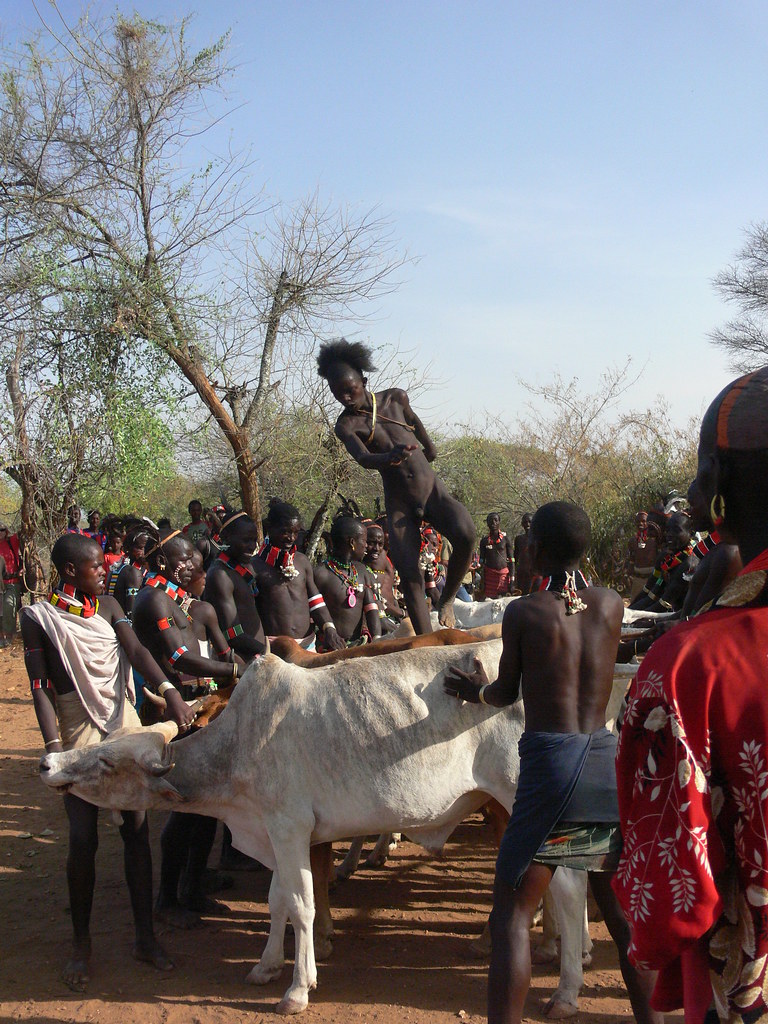 You’ll see in the photos, that he really did look worried about it all, but honestly, I’d jump over bulls any day compared to copping the whipping that the women got. He TOTALLY got off lucky!!!

Anyways, we did see some other tribes also, and we certainly marvelled at how they live in such an inhospitable land… but they were nowhere near as interesting as the Hamer tribe or the Mursi tribe, so we feel really blessed that we got to see both these tribes.

Now we have uploaded our photos of the Bull Jumping Ceremony at this link. But as a warning… seriously… DO NOT look at them if you think you’ll be offended by the violence or the blood as there are some pretty graphic pics there! The photos are arranged chronologically to show the progression of the ceremony and there is a bit more descriptive text there to describe things.

Anyhows, gotta sleep as we have to be up at 4am to catch a plane to the bibical north Ethiopia tomorrow so we’ll blog again soon.

PS. If anyone is interested in going to Ethiopia and needs a driver, guide or tour company, we can thoroughly recommend Sora Tours. www.soratours.com
Osman the manager was fantastic and gave us an amazing amount of advice on the travel planning.