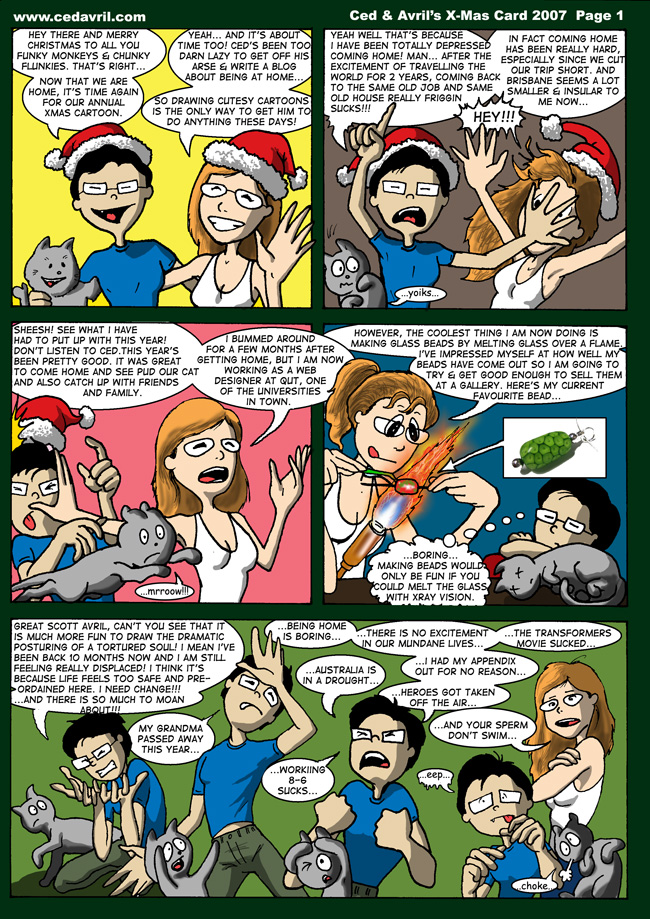 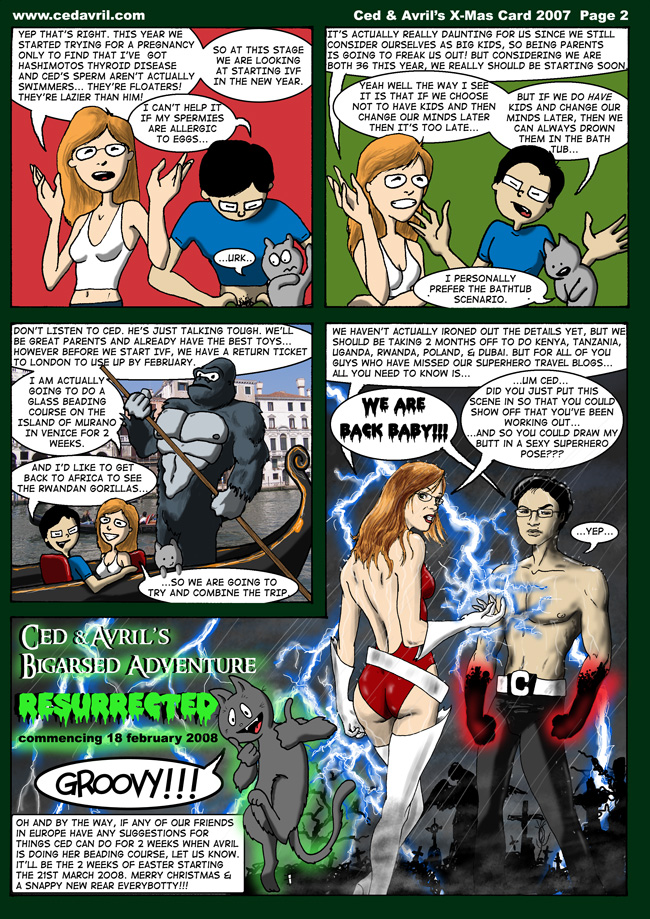 G’Day and a big sloppy Merry Christmas to everyone

Well, this is our normal very late Christmas cartoon and email, but unlike other years when we have normally had no excuse but laziness for being late… This year our excuse is because a few days before Christmas, I ended up in hospital getting my friggin appendix out!!!

AAAAAAAAAAARRRRGH! What a shittty Christmas and a shitty way to finish a shitty year!!!! Especially since the appendix ended up being normal so it didn’t need to come out anyway!!!!! Double AAAAAAAAAAARGH!!!!!!!!!

Well I guess I should be lucky they only removed my appendix and not my “table of contents” …OK that was a really bad joke, so you’ll have to blame my friend Steve for that one… (vomit)

Now for all you overseas folks, normally at Christmas time we head up to Avril’s sister’s place in Mooloolaba on the Sunshine Coast where we look forward to hitting the surf on Christmas eve, and at dawn on Christmas day for a swim…

…And I really look forward to it every year because you can go body surfing in the surf into the night and they normally have carols by candlelight and fireworks on the beach which shoot off over your head, which is a GREAT Aussie Christmas and certainly beats the shit out of a chilly wet and grey European Christmas like the last two Christmases we had!

So I was absolutely SPEWING when I couldn’t hit the beach this year due to the operation and now just as I am getting better, a cyclone has formed off the coast so that kills any chance of winding down at the beach this holiday at all! AAAAAAAAAARRRGH again!!!!!

Anyways, enough of my moaning. Attached is our usual Christmas cartoon which fills you in on our year so far.

Coming home was a bit weird as it was the first time that we have been away long enough to come back and all of a sudden see all the bad things about Australia and Aussie culture. You might have read how much I whinged about Irish culture, but coming back we realized how narrow minded and backwards Australia can be, and how disconnected we feel from the rest of the world living over here.

My year has also been very uninspiring after the excitement of our last couple of years traveling on the road. I remember in 1998 when we took a year off to travel, it took me another whole year to settle back down again, so I guess after being away for 2 years, it’ll probably take 2 more years to settle in again! Doh!

Other than that I am back in the same doctor job in a General Practice Clinic close to home, and unfortunately after being back at work for a couple of weeks, it was like I had never left, since all my old patients came back with all the same old problems to sort out.

From a business point of view it was really nice that I kept my reputation and wasn’t forgotten, but from a satisfaction point of view, it felt like I took a step backwards back into an old life rather than moving forwards like I have always done in the past… Man… need a holiday or a new hobby!!!

On the other hand, Avril’s had a great year getting into making glass beads and she has turned downstairs into a little beading studio with a hot head flame attached to a gas bottle to melt the glass, and a kiln to strengthen up the beads.

It’s really Avril’s first hobby that allows her a creative output, so she is loving it… And she is also loving all the attention from all our friends since the beads she makes are fantastic, so she has sold heaps off to friends already. Here is a link to some pictures of the cool beads that she is currently making.

We have also realized that we have so many pictures of us in exotic places, but very few pictures of us at home. So this time we have posted up some photos of our renovated house and life around beautiful Brisbane and its beaches, just so you guys who we have met overseas can see what life is like for us when we are not traveling.

We’ve also been lucky to have a lot of cute animals visit us this year on our back deck so we made a folder just to show off the wildlife that we see every day at this link. They make us feel furry in the tummy!

And also, even though we have so many pictures from beautiful places around the world, one of the MOST beautiful, and one of my most favourite places on the planet is Fraser Island which is only 2 ½ hours from home. You overseas folks might have heard me rave about it, so here are some photos from a recent camping trip if you are extra bored and want to take a look.

Anyways, gotta go and grab some dinner, so we hope everyone has had a very Merry Christmas and a snappy new rear!

PS And for all you motor heads out there, after Avril came home and bought a shiiit hot Mini Cooper, I just couldn’t let her have a faster car than me so I ended up buying a 5.7L V8 Monaro which is a bigarsed Aussie muscle car. OK it may not be environmentally green, but at least its coloured green and I now cycle so much that it is garaged most of the time, so I’m doing the world a favour by owning it! Oh YEAH!!!