Hi Everyone. So we just got back from travelling around Bhutan (our 64th country) with our 3 and 1/4 year old daughter and had a fantastic time so we thought it deserved some tips and trip notes from us to post on the Lonely Planet Thorntree and also Tripadvisor.

THE COMPANY AND GUIDE

First up a big thanks to the tour company that we used. We used Bhutan Rebirth and can highly recommend them. Keshav, the managing director, was very helpful and efficient in setting up the itinerary and organising flights and visas. And all of this was only 2 months before the trip since we were a bit last minute in deciding to go. He has very good English and was very prompt with email contact. We had preferred a smaller friendly company and we were delighted that Keshav took the time out to meet with us when we were in Bhutan to see how we were going.

Our Guide was Robin Gurung and we would highly recommend him. The guide really will make or break your holiday and Robin was fantastic. He went out of his way to accommodate us and even carried our daughter some of the way up Tiger’s Nest when she was tired. He also organised an impromptu stop at a school in Gangtey for us which was a highlight of the trip.

We would always see Robin trying to actively think about what else to do to make us more comfortable. Robin was also extremely passionate about his Buddhist faith and this was great to convey the culture across to us. He was very highly knowledgeable across a lot of topics too.

Our driver was Sangay Tensin and we were driven around in a Kia van which was very comfortable. Sangay also helped carry and look after our child especially when she was asleep in the car and we wanted to go off to look at a sight. Despite crappy roads we never felt unsafe in the car.

We found out that a lot of guides often will work as contractors to several companies, but Robin is pretty much exclusive to Bhutan Rebirth and that’s something we value in our choice of travel companies since it means that the company treats the guides well enough that they stay with them.

I don’t know if you really get a choice of guide when you book with a company but if you do, we were very happy with Robin. The drivers and cars though seem to be more contracted to different companies than the guides so I’d say you can’t really pick them.

We are very grateful to Robin, Kesahv, Sangay and Bhutan Rebirth for making it one of our more memorable holidays, and since we have been to 65 countries, that is impressive. I’d also make sure you book ahead as best as possible since the flights in and out of Bhutan are limited and the nicer hotels book up as well.

I think if you go to Bhutan you really should catch a festival, especially if you love photography. I do not think the trip would have been as impressive if we did not do the festival and you will see from our photos, it was really exotic. It was really worth bringing a zoom lens for it too.

The trip we did seems to be the gringo trail of Bhutan in that most people we met who had just under 2 weeks seemed to be on the same trip.

You will see a lot of fortresses and temples in Bhutan so prepared to be templed out.

My personal favourite area was Gangtey in the Phobjikha Valley as it was so tranquil, and our favourite Dzong was Trongsa as it is a rabbit warren of fantastic architecture. Although the Punakha Dzong is the most externally beautiful. Bumthang was nice but not as scenic in my book as the Phobjikha Valley.

The walking is mainly through farm land areas and most of our treks were no more than 4km and we walked most days which was great since both of us lost 3kgs each.

We did the Tigers Nest walk on the last day and in retrospect this was an excellent decision by Keshav since by then we had built up our altitude stamina. If we had done it on the first day, we would have struggled considerably.

We managed to see 3 days of this and also the last day when you get up at dawn. I reckon you could get away with just 1 day and then the last morning of it as the dancing is extremely repetitive and long. The dances themselves were a bit boring for us as they have local language significance but the people watching was awesome. You should try and sit in the front on the ground or up on the stadium area. Locals seemed to be very tolerant of tourists doing this. Definitely bring a zoom lens.

I’d also next time bring either cardboard or something to sit on since the seating is very dusty and muddy if it rains.

On the last day I personally don’t think it was worth getting up at 4am for the unfurling of the banner. It was really cold and I reckon it was close to 1 degree celsius and we had full cold gear on with down jackets, thermal leggings, beanie and mitts and we were still cold when sitting still. But then again we are from sub-tropical Australia so we are a bit whimpy with the cold.

All up we did spend a couple hundred US dollars on offerings, tipping, souvenirs, and drinks. You could just turn up with no money and get by but really you will feel the need to souvenir hunt and sometimes you will just crave sugary drinks.

My Mastercard did not work in all the banks’ ATMs but it did work well at the Bank of Bhutan ATMs.

We had read a couple of blogs complaining about the food. We actually really liked the food in Bhutan and lost weight whilst pigging out on all the healthy veges. The cheese sauces and butter just didn’t seem too heavy at all. Chicken seems to be the main meat often eaten but for some reason they really pulverised the bone which is weird so you often end up with bone shards in your mouth.

The only downside about the food is that a lot of restaurants and hotels do buffets which taste like it has been flavoured down for westerners, so some of it was a bit bland. Our kid had no problems eating the food.

At all places we stayed, tea, coffee, hot water were all included in the fee. Any other drinks and soft drinks were not included including juices.

We tried the chillies and they are definitely hot sometimes so be careful. The green chillies (mostly served with a light cheesey sauce) were milder than the red chillies. 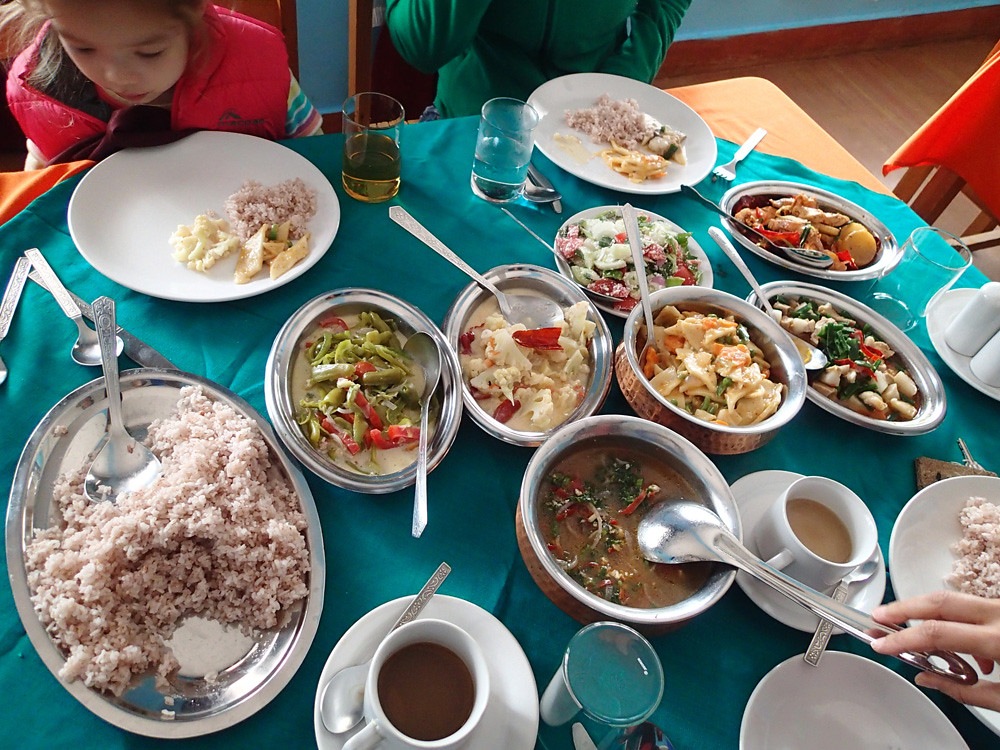 We had wifi at reasonable speeds in almost every place we went except the Gangtey Valley.

WEATHER AND WHAT TO PACK CLOTHING WISE

We went from the 12th April to the 24th April and on some days trekking, we were really hot.

When the sun is out, it is a hot sun, but when the wind is blowing it is a pretty cold wind.

Tigers Nest was a very hot walk and some people who started late and were walking up in the middle of the day actually were going to turn around due to the heat.

The early morning at ParoTeschu was very cold and we have no regrets carrying down jackets, mitts and thermal leggings for it, but it really wasn’t needed anywhere else on the trip. We mostly wore thermal tops, fleece jackets with jeans or trekking pants.

The hotels are very simple when you are out of Thimphu and Paro and really were a bed, heater and sparse furniture. Perfectly comfortable but not very well insulated so we definitely still had warm clothes on in our rooms. The heaters generally worked well to warm the place up and we general ran them overnight.

There was no need for sleeping bags since the blankets were very heavy material and worked well.

Electricity was a bit hit and miss in Gangtey but was fine everywhere else.

Do not underestimate the winding roads if you get car sick. Especially for the long days which can be 6-9 hours out to Bumthang. I would recommend taking motion sickness tablets those days.

They are widening the roads and the road out of Thimphu to Dochula pass only opens some of the day so it was a mad scramble to make to opening and sadly there were traffic jams here. On the plus side, we did get to see and wave to one of the past Queens and the entourage while sitting in one of these jams.

We saw mainly western toilets with plenty of toilet paper, but there were a few places without so it’s worth carrying your own paper.

We only did low level hiking to some temples and the walking was very easy.

It was mainly dusty trails but I could see it getting muddy in the wet. Most trails had a lot of cow shit on them and we were happy that we brought our gortex boots instead of non waterproof walking shoes.

Tigers Nest is definitely a decent climb but our 3 year old walked most of it so it is very doable.

Bhutan was easy with a kid but we were lucky that our kid is an excellent traveller. If you are walking Tigers Nest, you really want your kid to be old enough to walk or young enough to carry. The 1-3 year age group would be tough without a baby carrier. Dress the kid in layers to make it easy to strip down or layer up on the go.

There are a lot of stray dogs in Bhutan that roam around as packs. They all seemed to have a healthy fear o f humans but we were glad that we had our rabies shots and would recommend them especially for kids who would have a higher chance of being bitten. There is some issue with them barking at night, so we recommend ear plugs for Paro and possible Thimpu.

We use the digital version of The Lonely Planet Guide to Bhutan and it was quite good. However, we found it was best not to read too much about a place so we were nicely surprised when we got there.

Souvenirs in Paro are a lot more expensive than outside Paro. For example a CD cost 350N in Bumthang and 600N in Paro and they were reluctant to bargain down.

For things like books, trinkets and music and DVDs, I’d buy them out of Paro in the smaller towns and often in general stores.

Interestingly we bought some painted masks at a stall at the market associated with the Paro Tsechu and the quality was much better than what we saw in official shops around the place.

We flew in on Bhutan Airlines from Bangkok and there is a short stopover in Calcutta where you stay on the plane.

Our photos of Paro Tsechu are at this link

Our other photos of Bhutan are at this link

Our blog about Paro Teschu is here

Our blog about Bhutan is here