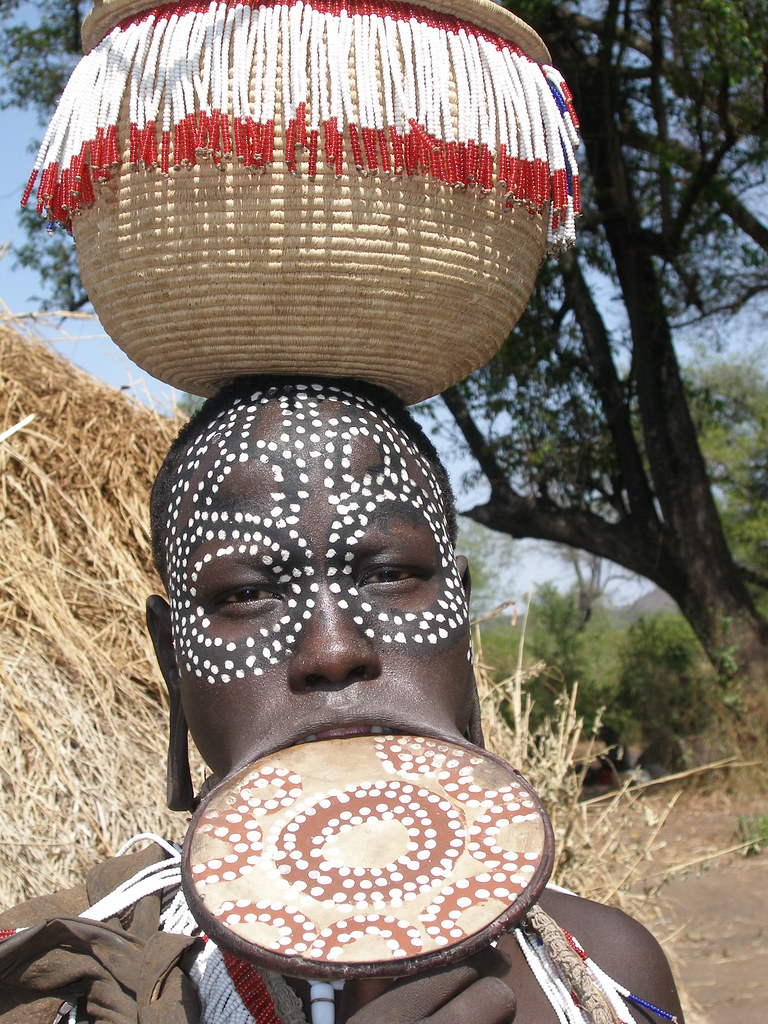 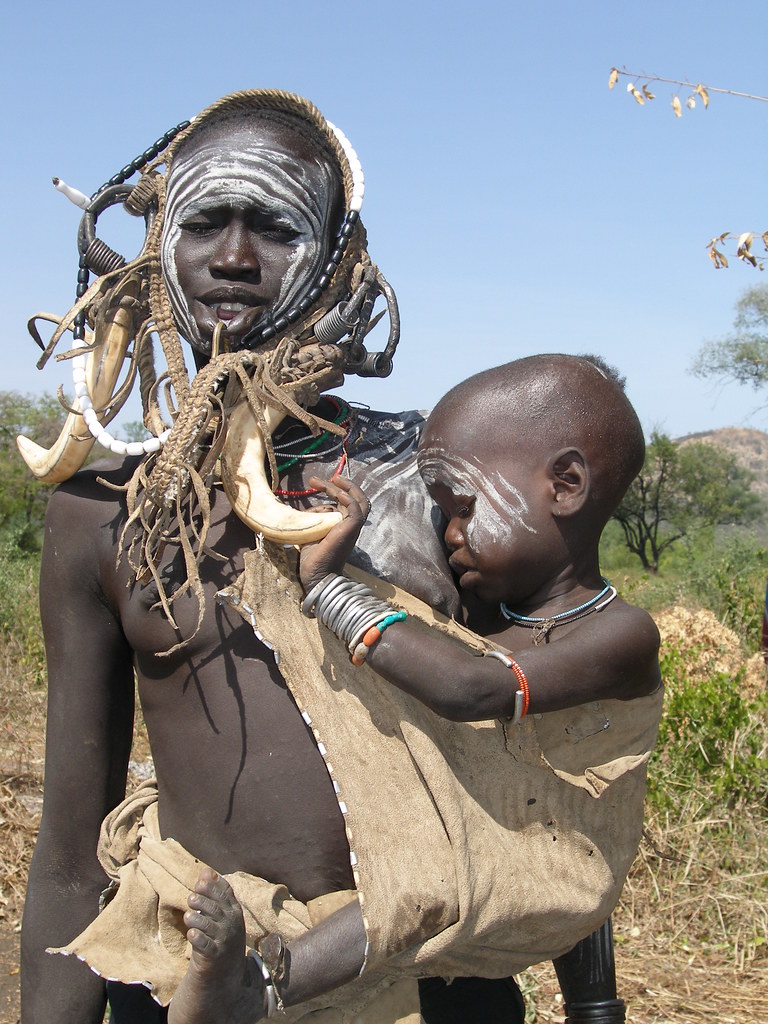 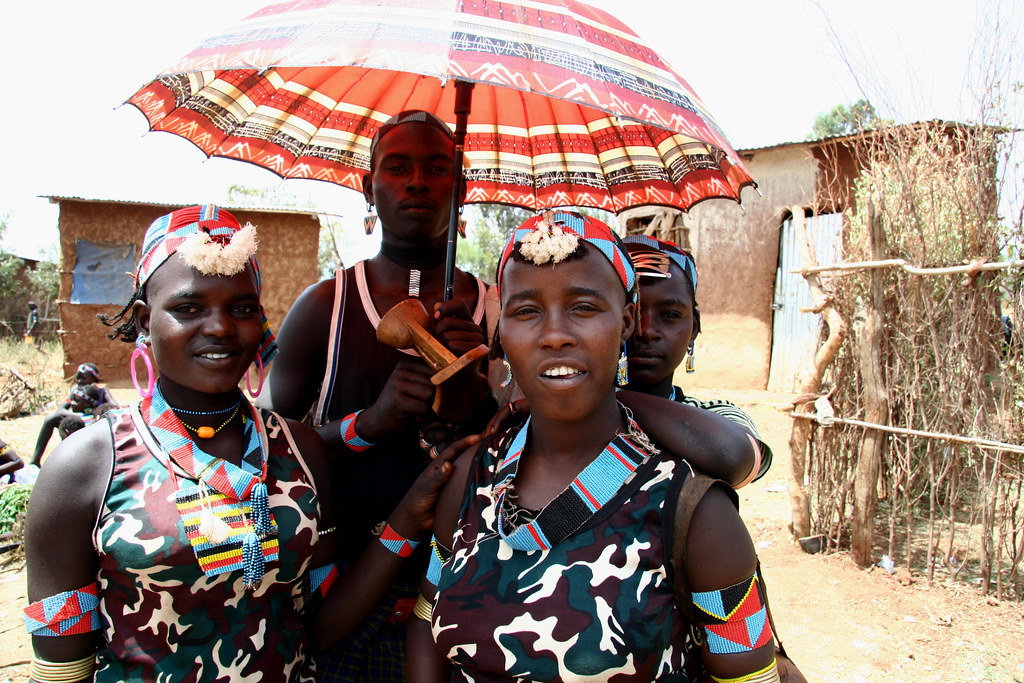 Tenayistillign to all you friends, family and other furry animals

Well we are currently in a small village called Jinka in the South Omo Valley in southern Ethiopia and HOLY SMOKES we’ve totally gone TRIBAL since, so far Ethiopia has blown us away with how interesting it is!

Man… Ethiopia is literally a HUGE country with the third highest population in Africa and by far, the most diverse mix of religions and ethnic groups in the whole of Africa…

…But the Southern part… which is called the South Omo Valley, since it lies in the lowlands bordering Kenya… is considered to possibly be the most AMAZING bit of Africa you can ever travel to since it is like travelling back in time to a primitive Africa untouched by the modern world!!!

Down here, there are dozens of different tribes who still live off the land in primitive huts, practice body mutilation, raid villages and go to war with each other… and they have rituals that are totally violent and barbaric to our Western sensibilities… So travelling down here is like travelling through a living museum!

However, the South Omo Valley here is so arid, desolate and rough, that there was no way we could do this trip by ourselves. So to get down here we were lucky enough to hook up with Sharikay an American girl who has been overlanding by 4×4 in Africa for the last 2 years, and together we managed to hire a 4×4 with a driver in Addis Ababa… so we are now 3 days into an 8 day expedition that should take us 2000km around Southern Ethiopia.

Now, despite how excited we were to check out all the funky tribes down here, the first village of the Konso people that we came across was actually really disappointing as tourism has ruined the village so much, that the entire visit was spent fending off the hordes of grubby kids who hassled us insistently for money and gifts.

In fact, the Konso kids are famous for being a village full of screaming brats who rule the village while the elders are out in the field, and they often end up sticking their hands in your pockets to steal things, and have even been known to attack cars with rocks when you don’t give them anything.

And actually while we were standing around listening to our guide, one little fekker threw a rock at us and actually ended up hitting some poor little girl in the head instead!!!

Holy cow… we barely saw an adult in the village except for the elderly, and it was completely like that movie “Lord Of The Flies” …except the only flies that we saw, were up their grubby little noses!!!

Although, I must say I was VERY impressed when I counted not one, two or three… but FOUR flies living in one girl’s nostril!!! Which I guess makes her pretty tough, especially when one nose hair alone annoys the living pus out of me.

Thankfully, next up was the colourful Key Afar market where several tribes from the Ari, Bena and Hamer people come to meet and trade. We got some fantastic photos from this market since the villagers all dress in their traditional clothes, but the thing that CRACKED US UP the most was that the latest fashion craze for all these tribes… is to wear BIRD MIRRORS around their neck!!!

That’s right… most of the men had bought those tacky “made in China” plastic mirrors that you put into bird cages for budgies to play with and were wearing them proudly dangling from their necks as jewelery!

Now although I was completely amused at their dangley jewelery… Avril and Sharikay were by far more interested in the OTHER dangley things between their legs. Yep… Avril has always had a thing for men in skirts which I guess is due to her Scottish heritage…

… But she was TOTALLY in heaven at this market since the guys were all homoerotically parading around barechested with their lean taut bodies adorned with colourful jewelery, and wearing skirts so short that you could often see their noodles dangling between their long muscular legs and tight buttocks. 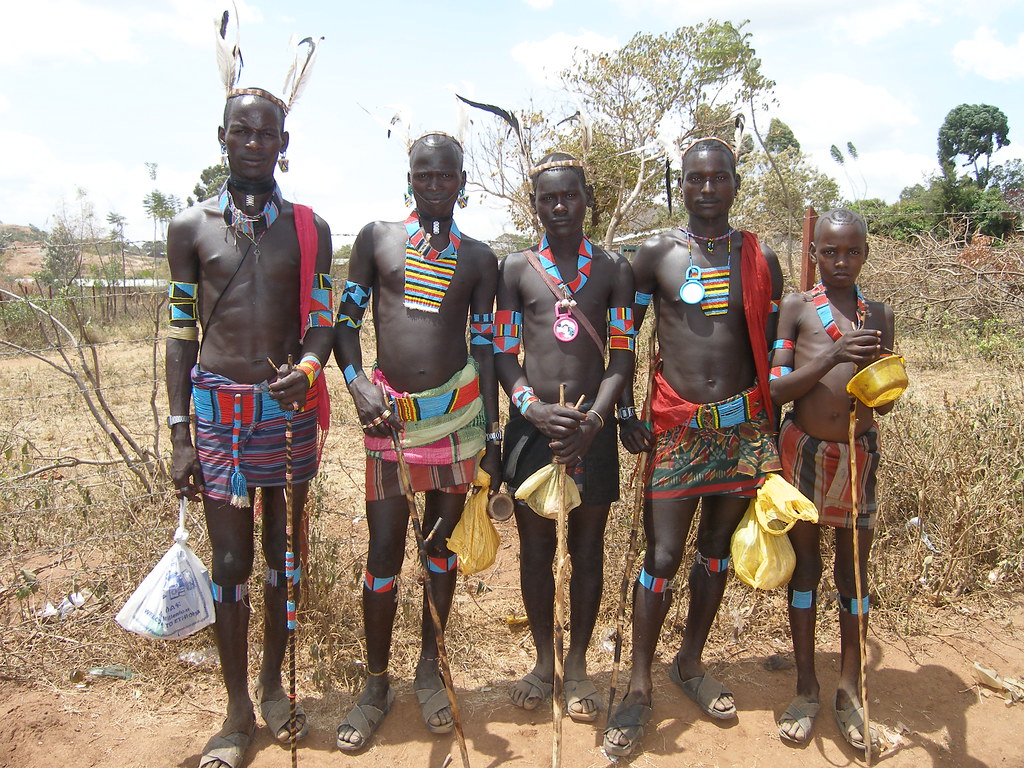 …Which of course I found out when I was sorting through all the UPSKIRT photos that Avril tried to take with her zoom lens… Geez and I thought guys were bad!!! But…yes girls… I have uploaded some tight skirt shots, but sorry, no noodle shots as they were all too blurry!

But despite the noodles being fascinating, just this morning we visited the MOST fascinating tribe EVER!!! The infamous MURSI PEOPLE!!!!

HOLY COW!!! Man… the Mursi people are simply FREAKY!!!! As you can see in the attached picture, they are the famous tribe that you have probably seen in “Shocking Africa” documentaries where the women all cut a hole in their lower lip and then stretch their lips grotesquely over a number of years until they can wear those BIGARSED coloured discs in their lower lip. 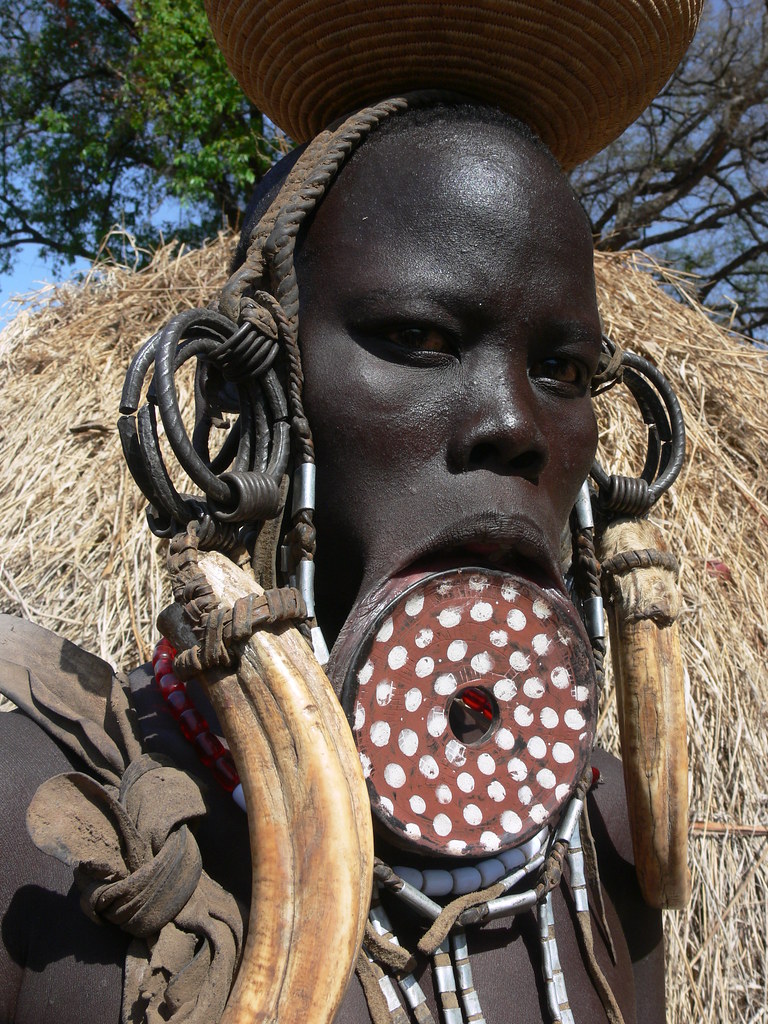 Not only that, but the Mursi are actually fiercesome warriors, and are actually quite aggressive, so they would often grab us by the arms and actually sink their fingernails into our skin just to get us to pay money for their photos.

…Which is actually even more FREAKY because you can’t tell them off since even the women carry the BIGGEST-ARSED guns I have ever seen!!! 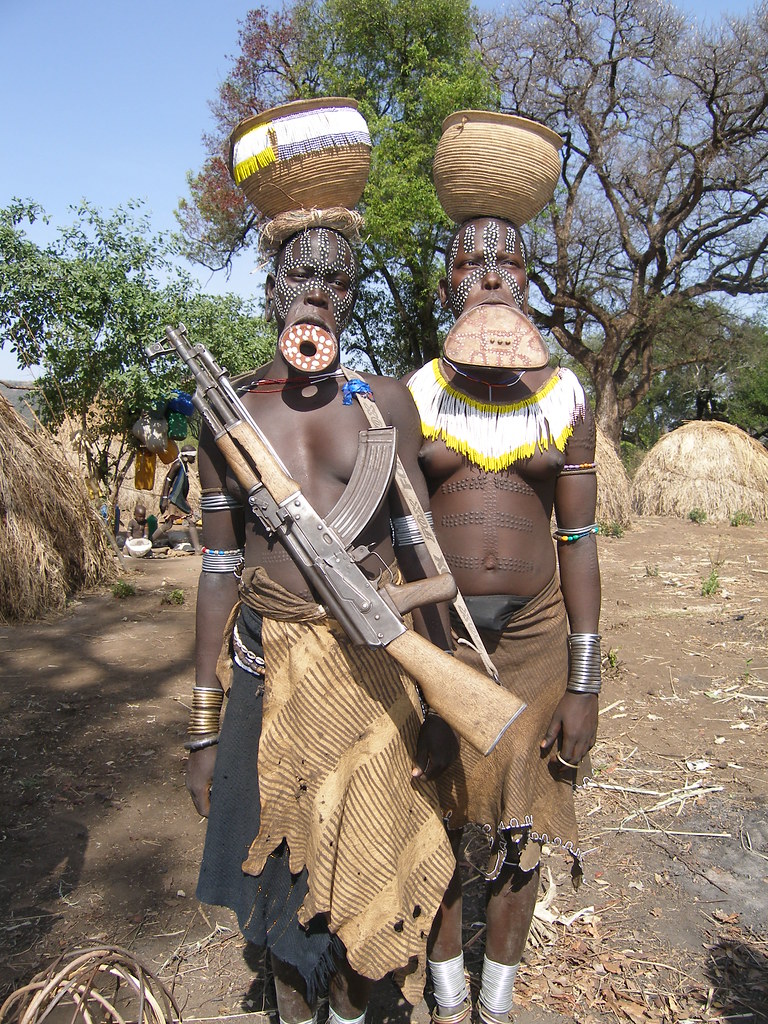 In fact even our driver got hassled for money and eventually we actually had to make a hasty getaway when a fight broke out over money and we had 2 of the Mursi men running along side the car trying to grab money off our driver through the car window as we were speeding off!!! YOIKS!!!!

In anycase, we are now back to the safety of our guesthouse, but if you are bored you can check out our Omo Valley pics here at this link. Our fantastic Mursi people photos are towards the end of the photo set just after the shots of me going all Kung Fu on some Ethiopian arses.

Yep that’s right… once again I am badly promoting Chinese stereotypes by busting some “Everybody Was Kung Fu Fighting” moves and pretending to be Jet Li’s brother while travelling through Africa. But this time it backfired and I ended up in an impromtu martial arts competition on a disused airfield in the centre of town. I, of course whupped some awesome Kung Fu action on their sorry Ethiopian butts as you’ll see on their faces in the photos… Oh YEAH!!! Hammer
time!!! 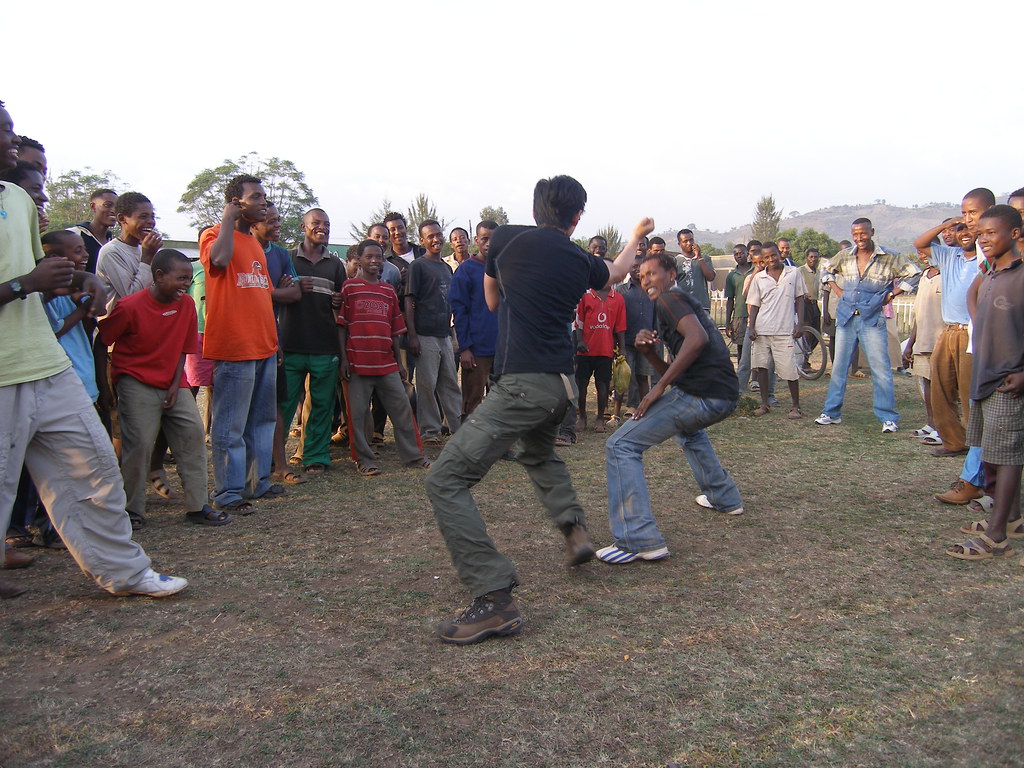 Anyhows, off to eat dinner now so Ishi Chau and lots of love
Ced Li
“I love instant noodles” Avril 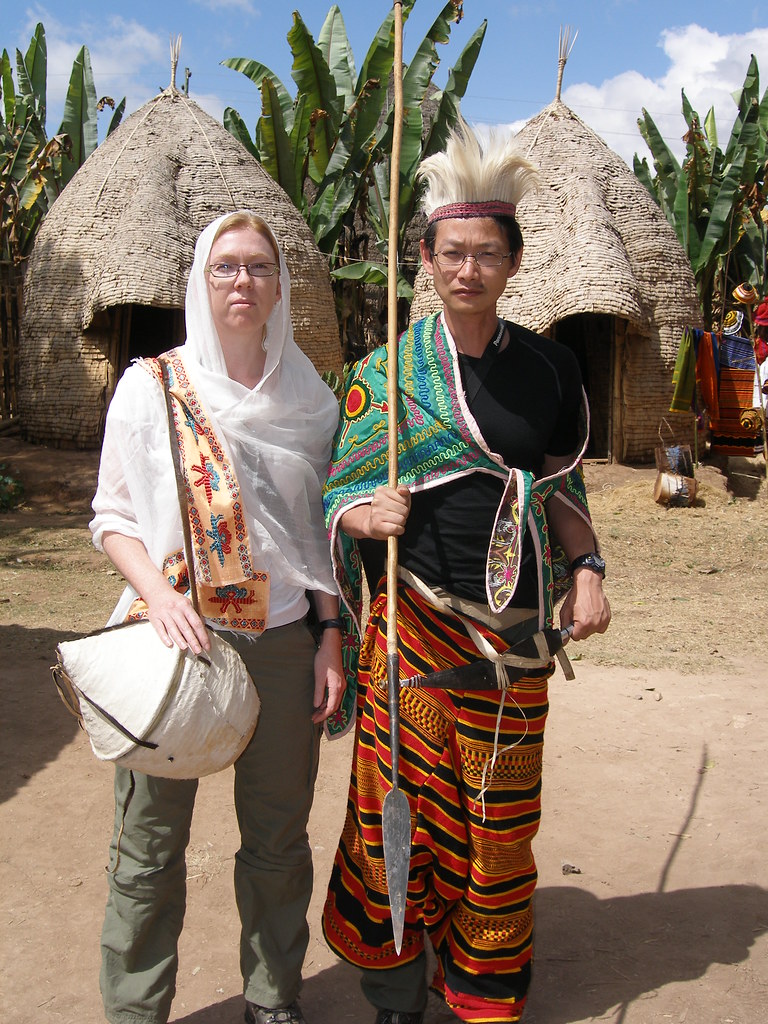 PS Thanks to all you guys that replied to our last blog and were excited that we were on the road again. We wanted to write back to all of you, but Ethiopian internet is mostly dial up and is woefully slow, so we didn’t have the chance… And as you can see by the date, we are a bit behind in our blogs so most of them will be a week or so behind where we actually are.