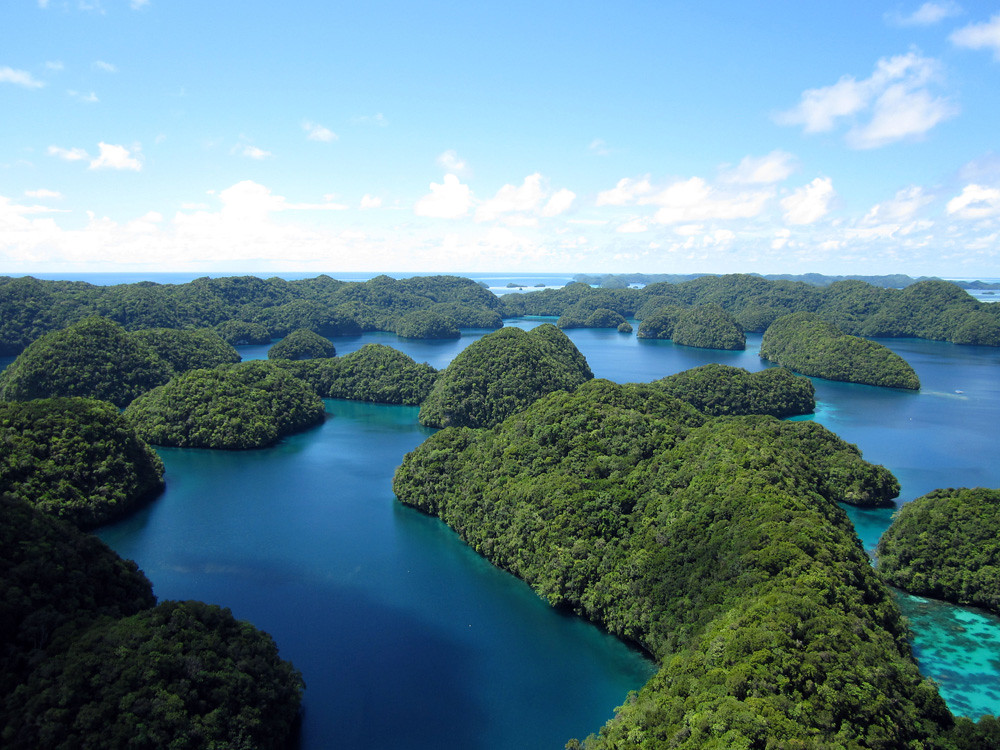 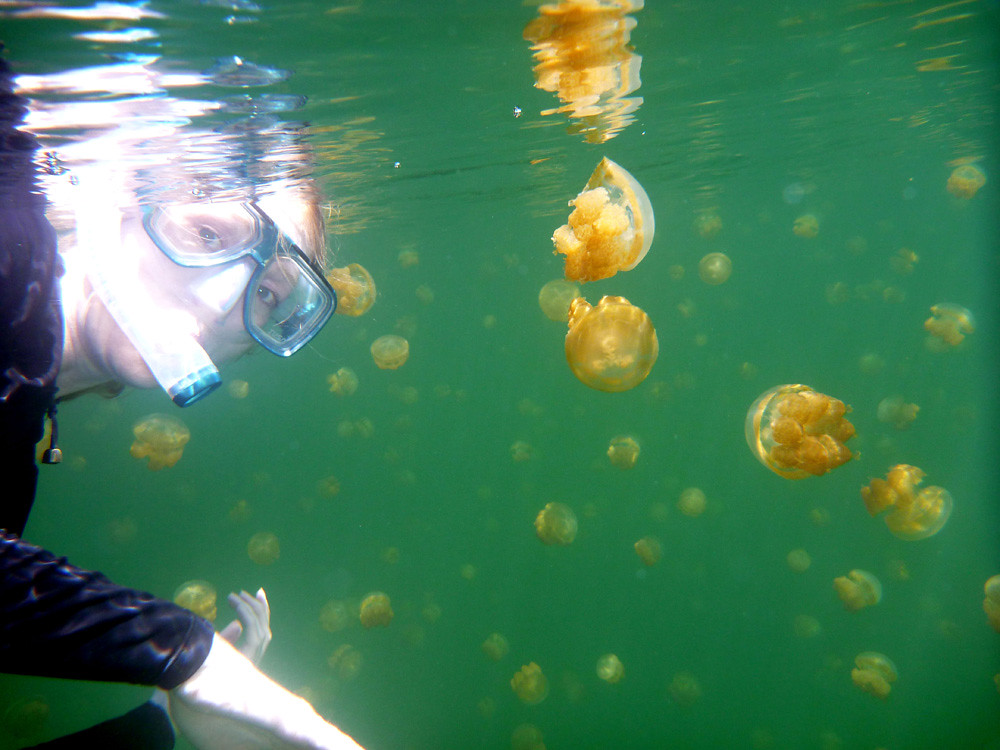 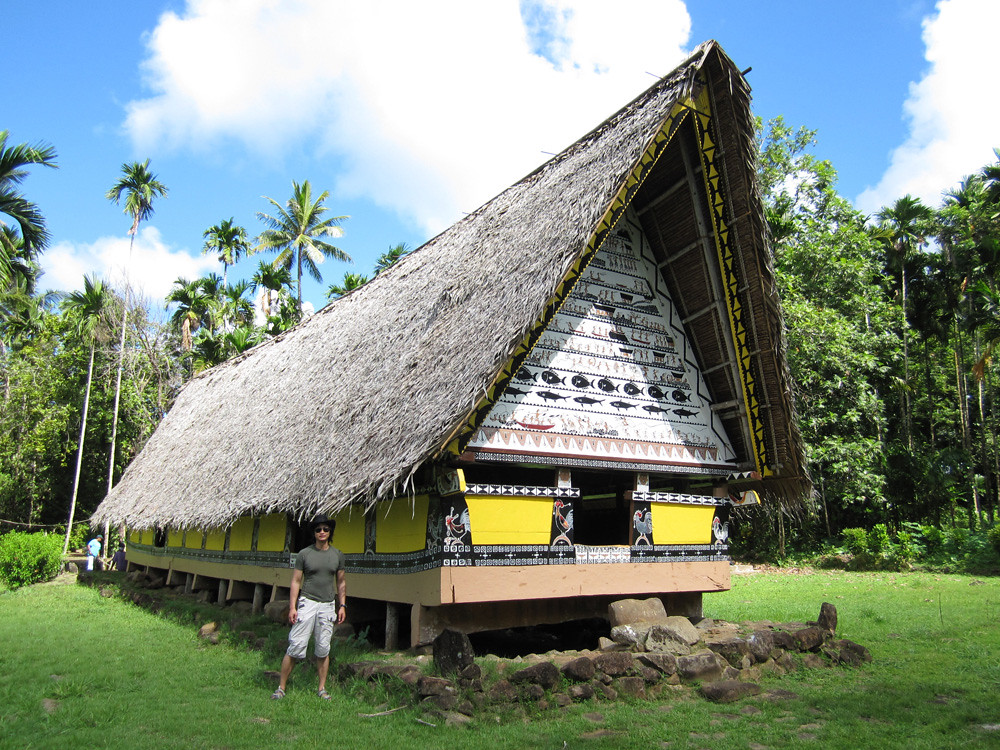 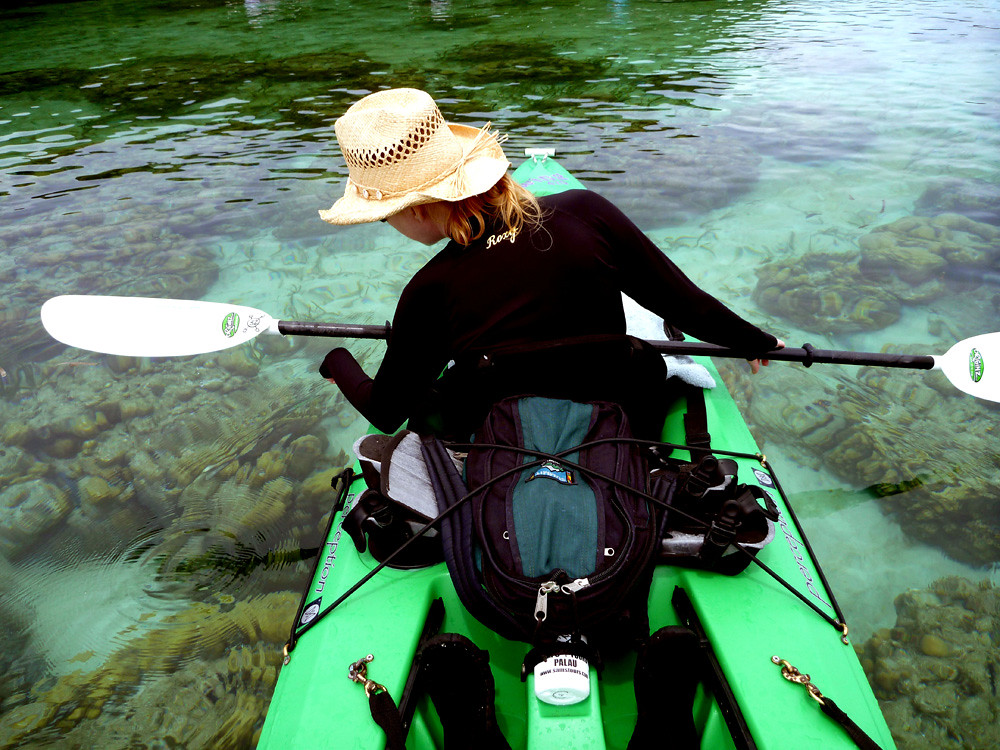 Alii to all you friends, family and other smellyfish jellyfish…

…And after one of the challenges, the winners were taken to a natural volcanic lagoon that had risen up millions of years ago from the ocean carrying a heap of jellyfish with it, called Jellyfish Lake.

Well, over the years, with no natural predators, the jellyfish had lost their stingers and multiplied to over 20 million… and obviously one of the WAY COOL things to do is to go swimming in the lake surrounded by a cloud of orange jellyfish just like the contestants of Survivor did.

I remember Avril turned to me and said “Holy Shit!!! We TOTALLY need to do that!!!!” Followed very quickly by me saying “Where the fuck is Palau???!!!!”

…AND… it’s TWICE as cool since this is ALSO at The North Beach Cottages at the top end of Babeldaob Island where the contestants from Survivor stayed once they were voted off from the game!!!

OK… back to the blog…

So… anyways we now know that Palau is a group of around 300 islands in Micronesia, which is in the Pacific just east of the Phillipines and just west of Guam and about half way between Japan and Australia just off the Equator. And up until the 2 seasons of Survivor that were filmed here, this island paradise was one of the best kept secrets known only to scuba divers and US military personal holidaying from Guam.

We really only came here to swim in Jellyfish Lake, so we were completely blown away by how friggin beautiful Palau actually is.

Man… Palau is an amazing array of islands, reefs, coves, hidden bays and lakes, and the centre piece is an area called the Rock Islands which are cute little islands covered in impossibly thick jungle that pop out of the crystal blue water like little mushrooms. 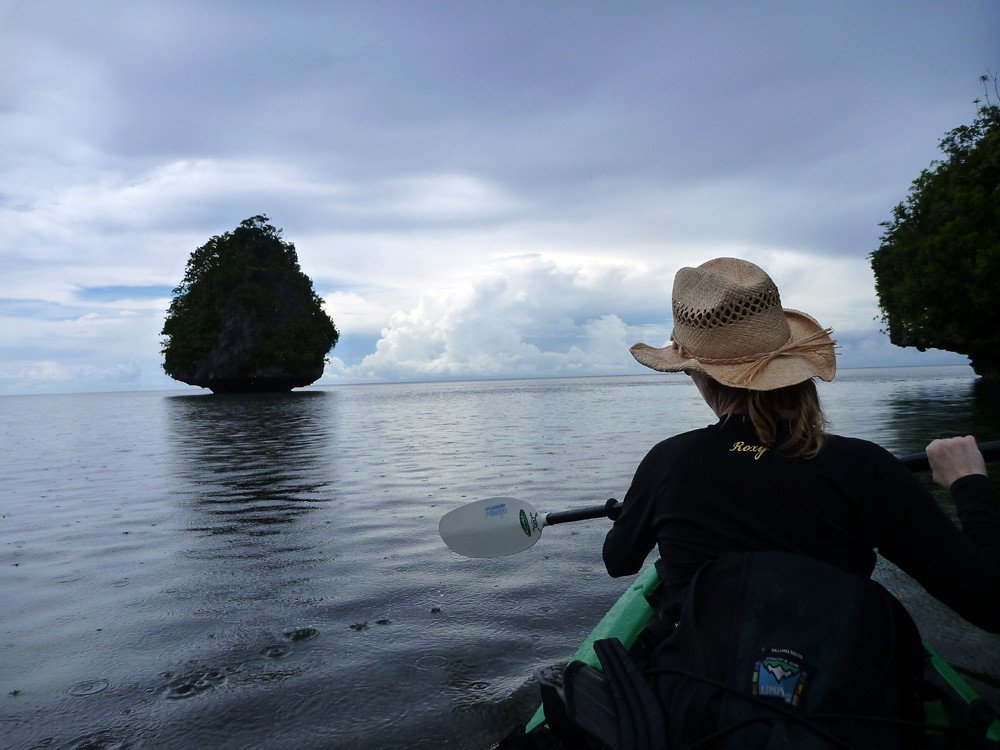 These islands are protected by a huge barrier reef so the coral is more elaborate and delicate than we have at home in Australia and the underwater life is in much more abundance than we have at home too. We’ve seen manta rays, and 7 foot sharks just while snorkelling and we’ve even seen dugongs here, which we’ve never seen at home. 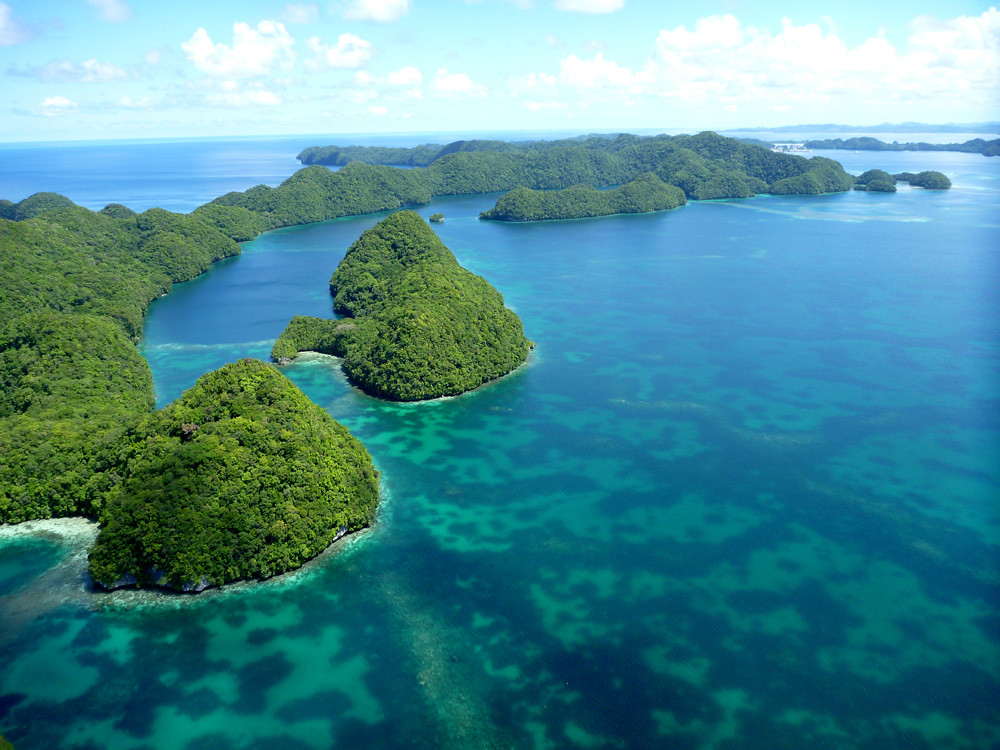 They actually have reef areas called Shark City and Clam City which have sharks and giant clams all over the place,

So over the last week, we’ve been snorkelling, kayaking and helicoptering all throughout the islands, which has been totally amazing especially since Palau is also known for a lot of WWII history.

There are actually Mitsubishi Zero fighter planes crashed onto shallow reef here and the Japanese still have such a strong influence here that most of the restaurants offer tropical fish sashimi which is the freshest we have ever had.

…oops just threw up in my mouth a bit…

Well, the pics that are attached are an aerial view of the Rock Islands and also Jellyfish Lake, which truly was one of the best wildlife experiences that we have ever had! 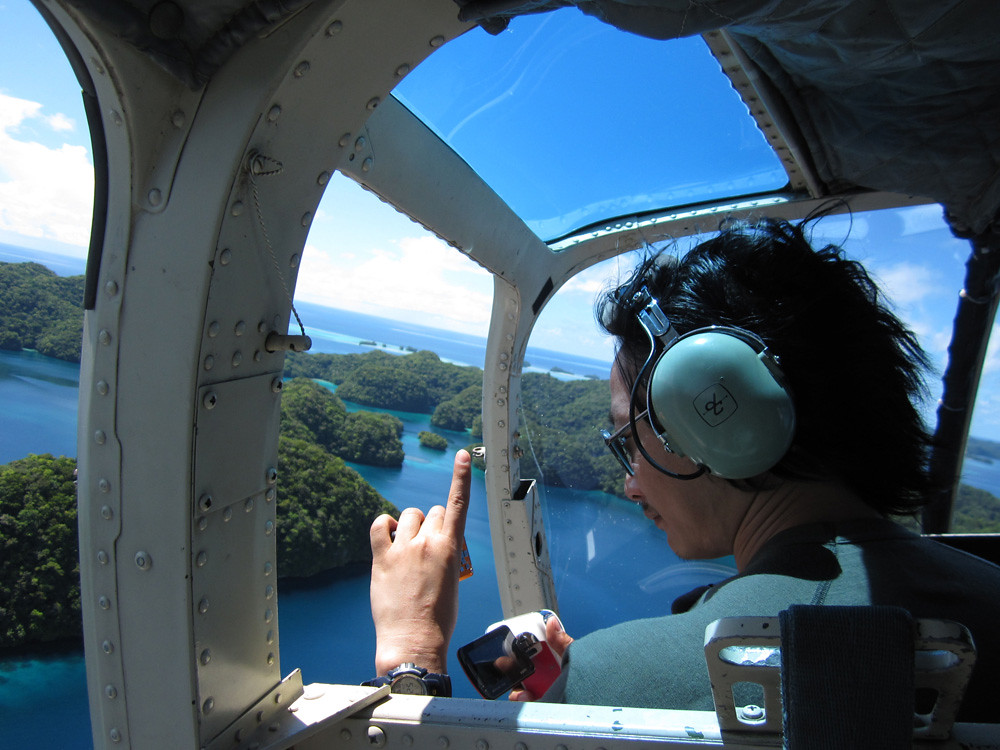 The jellyfish follow the sun en-masse and concentrate themselves into a tight cluster called a cloud burst, and you need to swim around the lake until you find them. 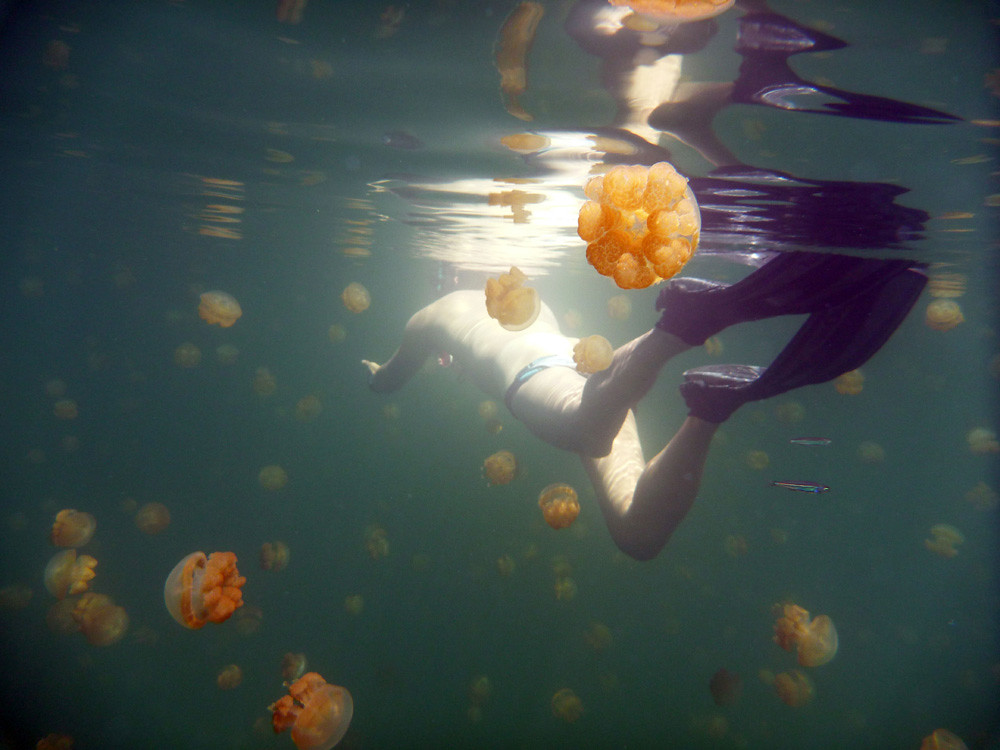 It was completely a surreal feeling floating in this hyper green lake with bright orange jellyfish pulsating all around you in different directions.

…and I know I should have been totally in touch with the entire National Geographic feel of it… but with all the Jellyfish bumping off each other in different directions, all I could think of was that it was totally like that 80s arcade game Asteroids!!! Man I’m such a geek… 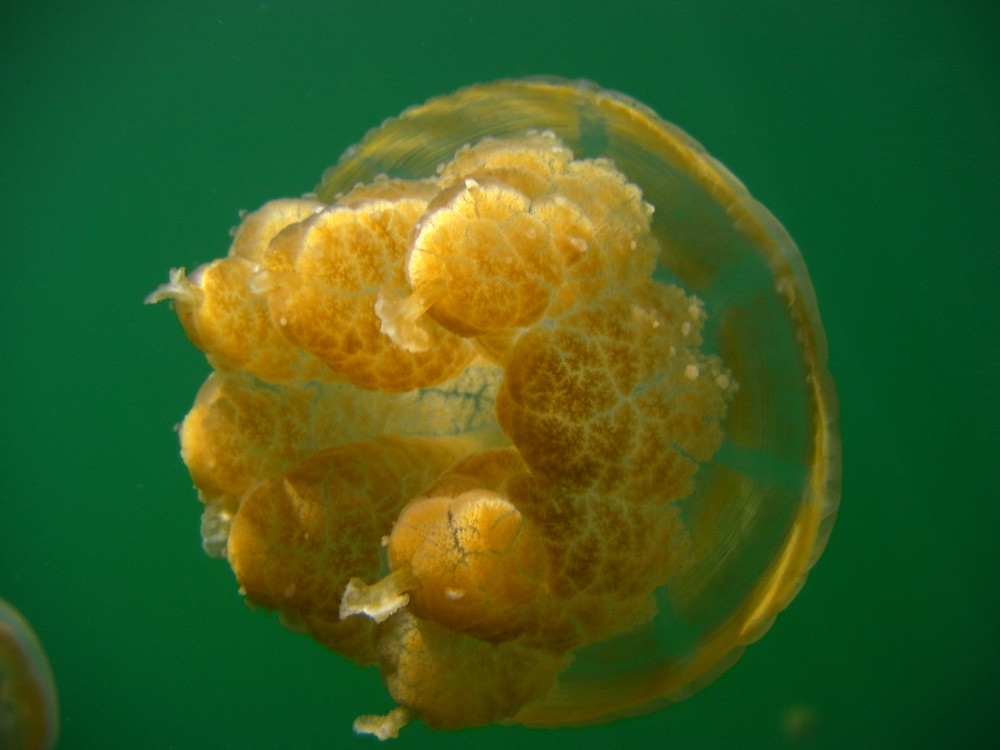 Well if you’re bored this is the link to our Palau pics with Jellyfish Lake and Clam City.

And if you want to see what the Jellyfish Lake was really like this is a youtube link to a 4 minute video we made with our funky new Sanyo Xacti dmx-ca100 underwater pocket video camera. (Highly recommended as it is a true HD camera too).

And if you are super bored this is the link to the helicopter flight video.

Anyhows, we are off to Japan to bum around for the next 3 weeks so if anyone has some tips for quirky and funky things to do in Japan… then please let us know.

Will probably be in Tokyo for a week and then head south from there to Hiroshima before flying out of Osaka.