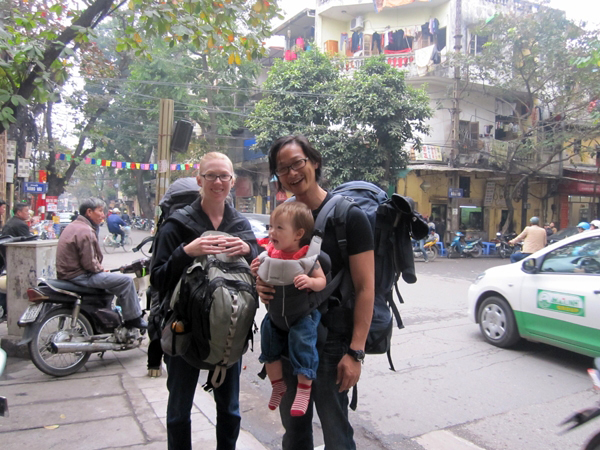 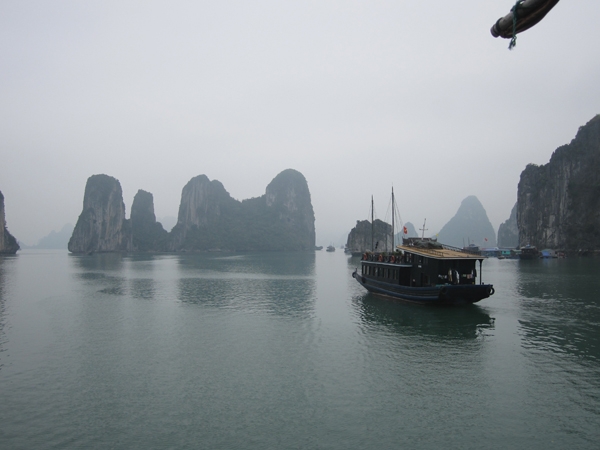 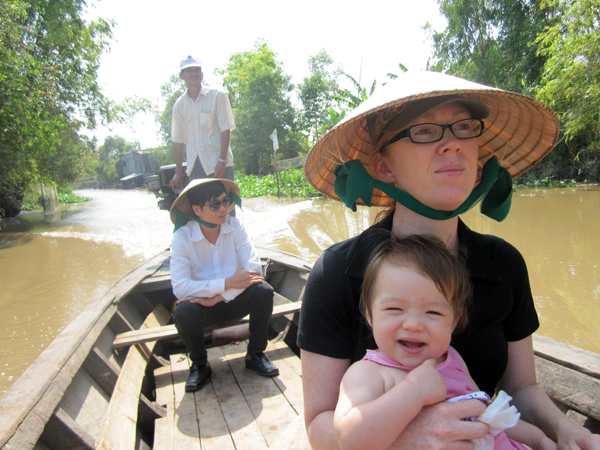 Xinh Chao to all you funky monkeys and secret squirrels

Now it would be great if we had an awesome travel story like the other girl sitting here who had her passport stolen by row boat pirates who rowed up to her junk in Halong Bay, climbed through her window to steal her passport and then rowed away…

Aaaaaaaaaaaaaarrrrrrrrrgggghhhhh! I think I was able to hold back the “I fecken told you so” for all of about 2 seconds… and needless to say Avril has copped ENORMOUS amounts of shit about it ever since…

But anyways, I was hoping to keep this as our usual immature toilet humour travel blog but really, Vietnam has been a pretty basic country to travel through so we haven’t done anything truly adventurous here. So unfortunately the most interesting thing that we can blog about is how we’ve backpacked with a baby. Yep sadly it looks like our intrepid travel blog has now turned into a ‘how to travel with kids travel blog.’

So the main reason for this trip to Vietnam was for the Vietnamese food as we were inspired by a Luke Nyugen an Australian/Vietnamese celebrity chef who kind of looks like me and did an awesome show on the different regional foods in Vietnam. But the second reason was to see if we could still maintain our travel lifestyle with a baby… and to see if Kitson has our travelling superpowers.

…And… Well… all we can say is that backpacking with a baby has certainly been challenging… AND a massively steep learning curve.

So first of all Kitson actually travelled pretty well and she actually handled the time difference, food and the temperature changes way better than us.

Vietnam is a really long country with a wide change in weather patterns and we started in the Ho Chi Minh City in the south which was 34 degrees and so stinkin humid that we headed to Nha Trang a beach town just to escape the heat.

Unfortunately we hit the winter monsoons in the old imperial city of Hue in central Vietnam. And we are now in Hanoi where the temp is down to 15 degrees.

We did manage to get out to the famous Halong Bay where those thousands of limestone islands rise out of the water… but that was also pretty miserable in the cold monsoonal rains and really not worth going to in those conditions.

But thankfully we weren’t really that interested in the war history or the scenery… we just came to eat… since Vietnamese food and Japanese food is our 2 most favourite cuisines. And thanks be to Buddha, Kitson handled the food really well too… but unfortunately she is now addicted to noodles and sashimi and we have learnt the hard way that nappies smell twice as bad as normal with fish sauce poos. 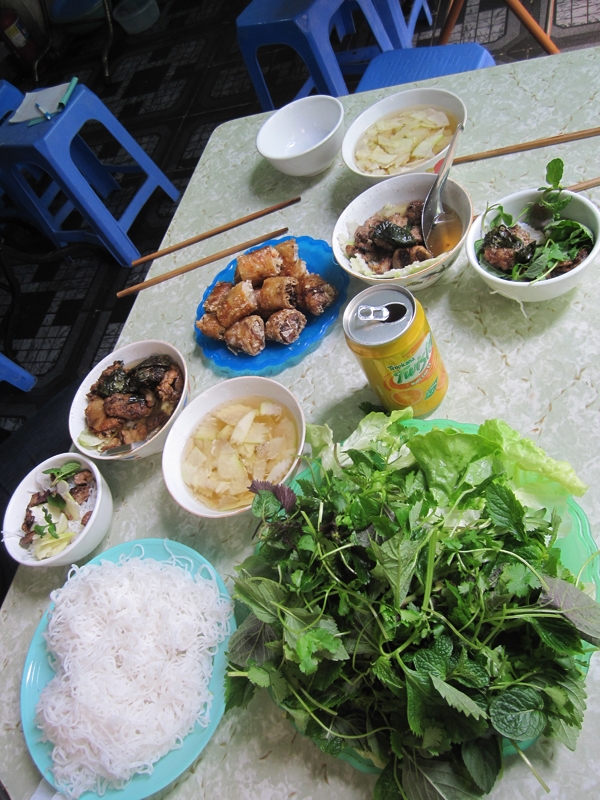 Vietnam is also famous for the chaotic mayhem of motorbikes on the streets and it is completely impractical to use a pram, so we mainly have been carrying Kitson around using a Baby Bjorn sling. Now those dumbarsed Swedes really didn’t account for using their slings in hot climates in their design because we got really stinky hot using it… and unfortunately spending a whole day in it actually gave Kitson a bruised vagina… Yee-ouch!

Poor girl… she may have a developed a vaginamite of steel, but luckily her travel Kung Fu is strong.

So far she has survived floating up the Mekong Delta in a dugout canoe and she even survived being crammed like sardines into a ratchety local minibus for 3 hours over the Hai Van pass which is the amazingly beautiful rugged coastal road made famous in a Top Gear episode, so she has definitely proven to have our travel superpowers.

However the hardest thing we found was that because Vietnam is so filthy with pollution and muddy due to the wet weather, and because she can’t walk yet, we had a really hard time holding her back from crawling. Even though I normally tell patients that germs are good to strengthen the immune system, even I got a bit nervous with all the crap on the ground. In the end we had to just let her crawl on the filth and thankfully her immune system handled the rest… Woohoo… Looks like her bacteria fighting Kung Fu is strong too!!!

Now being her parents, we were well impressed with her travel kung fu, but the thing that blew us away the most is that in Vietnam…. Kitson is a FRIGGIN ROCK STAR!!!!!

I FRIGGIN shit you not! Holy crap… we don’t know whether the Vietnamese aren’t used to seeing travellers with babies or whether Kitson was being super charming, but we couldn’t walk down the street without people yelling out “BABY!!!!” and then running up to her to play with her. And of course Kitson really knows how to work it so she was smiling and talking to anyone and everyone. We actually had to be her body guards and keep people off her at times!

The young 20 something Vietnamese who seem to run all the restaurants and hotels are definitely hypo manic and seemed to love kids and even the men would want to pick her up and cuddle her all the time. Initially it was awesome as we could go to any restaurant and they would just take her from us and feed her for us… but eventually it really changed her personality and she became addicted to the attention and she would wail in protest when they tried to hand her back to us… her boring old parents. Feck me… at 12 months we have already become irrelavant in her life :p

Most disturbingly though, is that she became addicted to cuddles by Vietnamese men in uniforms as a lot of the hotels have young doormen who would play with her and she got to the stage that she would actually refuse to go to the Vietnamese women. In fact she is so addicted that she is now grabbing at any asian guy in a uniform on the street including guards and policemen. Man… I found this Asian men addiction to be very disturbing and have now realised that I will have to also keep my Kung Fu strong for when she is a teenager…

Yep… just like in an old 80’s computer game any future boyfriend will have to fight up the ranks until they reach me… the BOSS LEVEL!!! POWER UP DUDE!!!! 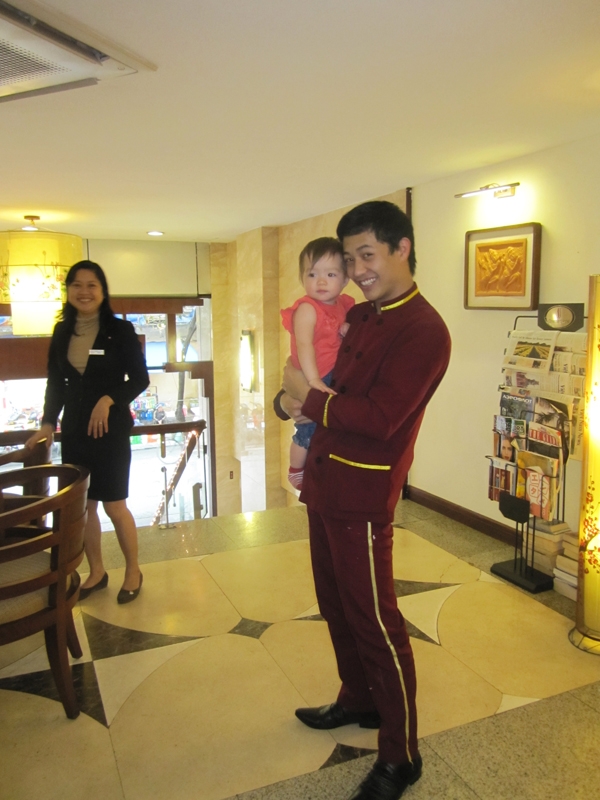 So what’s the verdict about travelling with a kid?

Well it really was a completely different travel than we are used to and there were times that we really didn’t enjoy it. But travelling with a baby really opened doors with the locals that we would never had experienced otherwise. And surprisingy people rip you off less and touts hassle you less when you have a kid… and you can jump queues everywhere!

However, I absolutely missed going out and enjoying nightlife too and we found it really tough to provide her with run around time in the middle of a day.

All told, I think we picked one of the toughest ages to travel with a baby… but despite it being challenging it was very doable and we are hoping we can still knock some more countries off our travel list before she hits school age.

And in actual fact, going travelling with her has been awesome for getting her… and us… out of bad habits. At home we used to fuss over keeping her to her sleep and eating routines and started revolving our life around her routines. But once we stripped away all the crap of western society and just got into a more nomadic lifestyle, we found that she adapted really well and is now a lot more robust and now only eats when she is hungry and can actually sleep in the middle of a cacophony of motorbikes and car horns on a busy Hanoi street. That alone was worth going on holidays for. Man every parent should go travelling just to make their kids more adaptable!

Anyways, the fecking Australian Embassy told us Avril’s passport would have been ready an hour ago so as soon as we get it we are off to get a new exit visa from the Vietnam Immigration office… FECK… and hopefully we’ll be Hong Kong in a couple of days to herald in the Chinese New Year of the Dragon. And we’ll be back in Australia at the end of the month so Kitson can tell all her playgroup friends that she just returned from her tour of duty in Nam… and scooters still make her jumpy and agent orange cordial burns her to her core…

Snatch you all later. Lotsa love