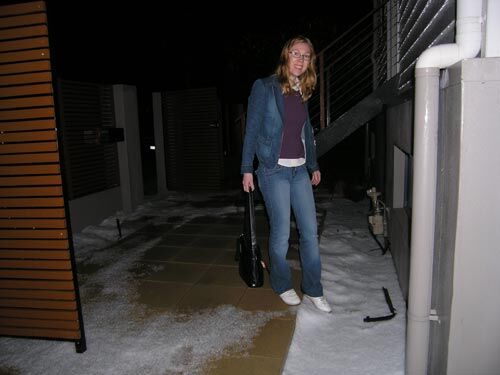 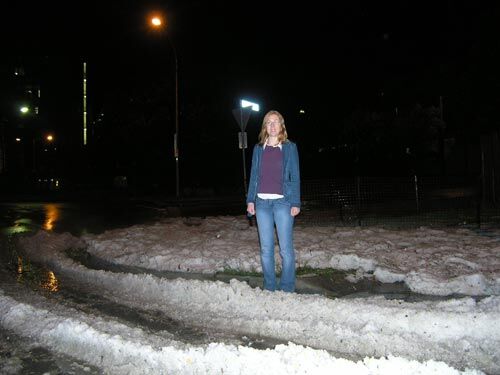 Amongst the hectic preparation for our upcoming overseas trip, Brisbane was hit with a massive hail (hail==ice) storm. I was driving (or trying to) in peak hour traffic to an appointment in Toowong when the storm started. I managed to get my car onto a side street under a tree to try to protect my car from hail dents, but it was like using an umbrella with holes in it. My car still got pelted.

It was an bizarre and amazing experience to be in. Traffic came to a standstill or looked for cover under bridges and trees. You couldn’t see very far because
of the frenzy of the hail, rain and debris just flying everywhere. The noise of the hail cracking on my windscreen and pelting my roof was LOUD. I phoned Ced to warn him of the storm, and he handed his mobile phone to other staff members so they could listen to how loud the sound of the hail hitting my car was.

I eventually got my car out from under a tree but it wasn’t long before I lost traction on a hill and had to put my hazard lights on and hold up peak hour traffic. I have never driven on icy roads before so I wasn’t sure what to do. Eventually, someone else lost traction too and I watched them get out of the situation by rolling down the hill until they got to a bit with less ice on it. Brilliant! So that’s what I did and I got to my appointment – 45 minutes late.

For those of you who don’t know Brisbane – it’s tropical here. We get hail storms here, but it hails in summer not autumn. And this time it was more ice than rain! I’ve read reports that the hail was between half a metre to a metre deep in some areas. Our street and home was turned into a winter wonderland 🙂 Something we’re not going to see for a long time, if ever again.

Check out the photos under “Home”