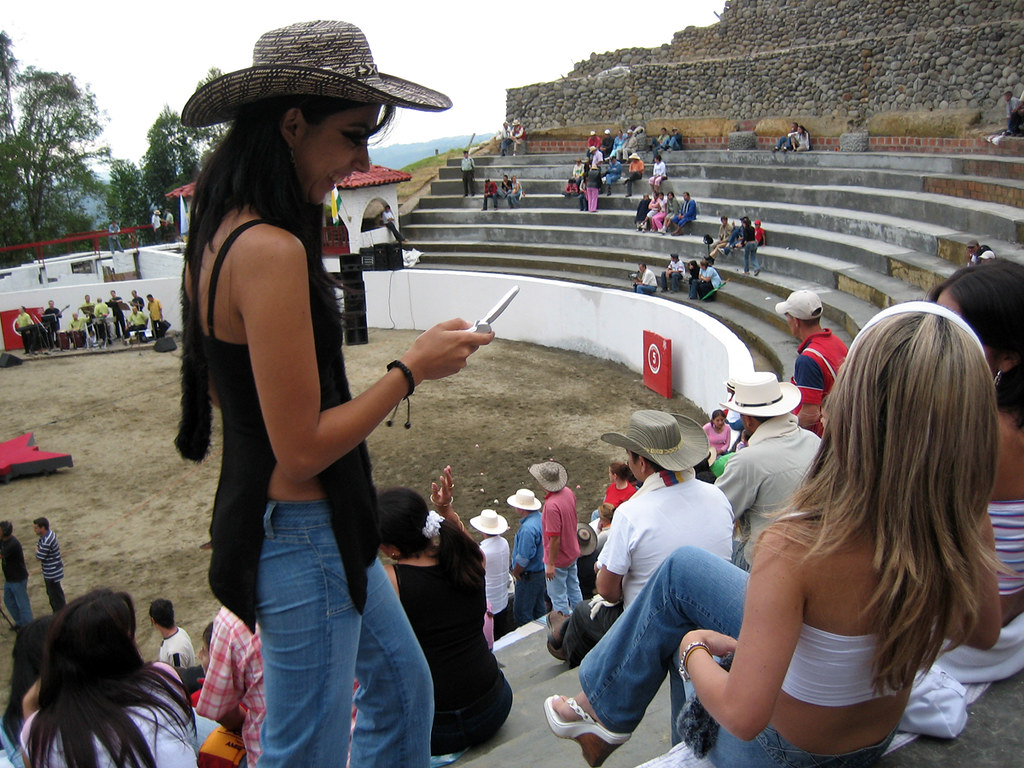 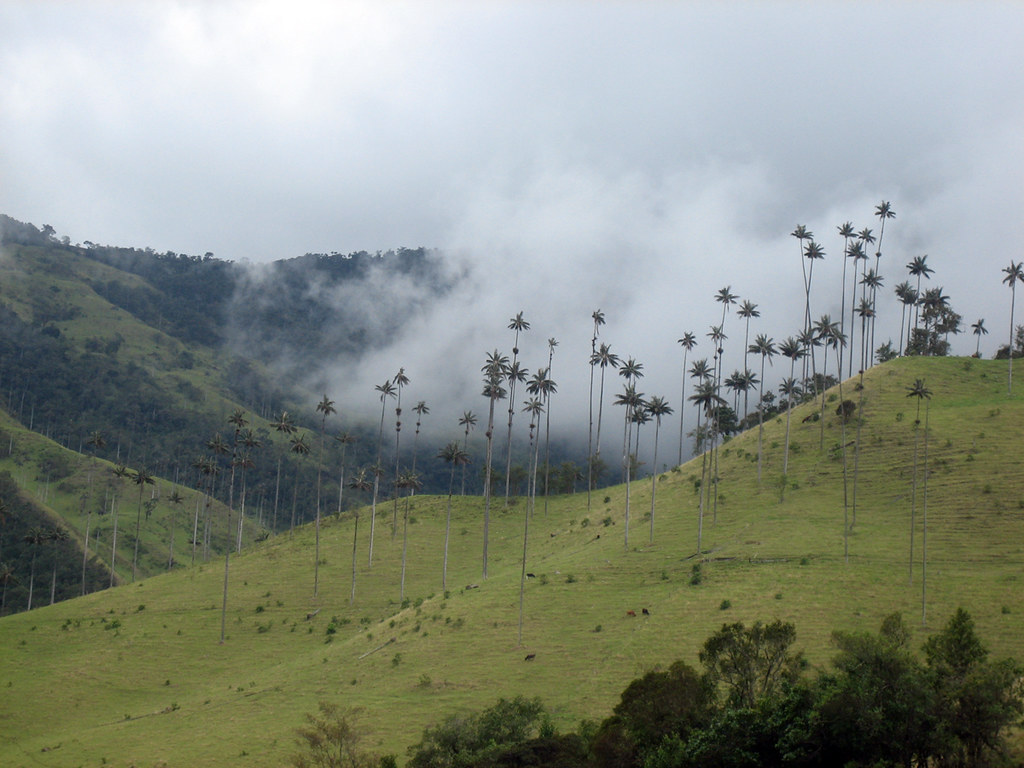 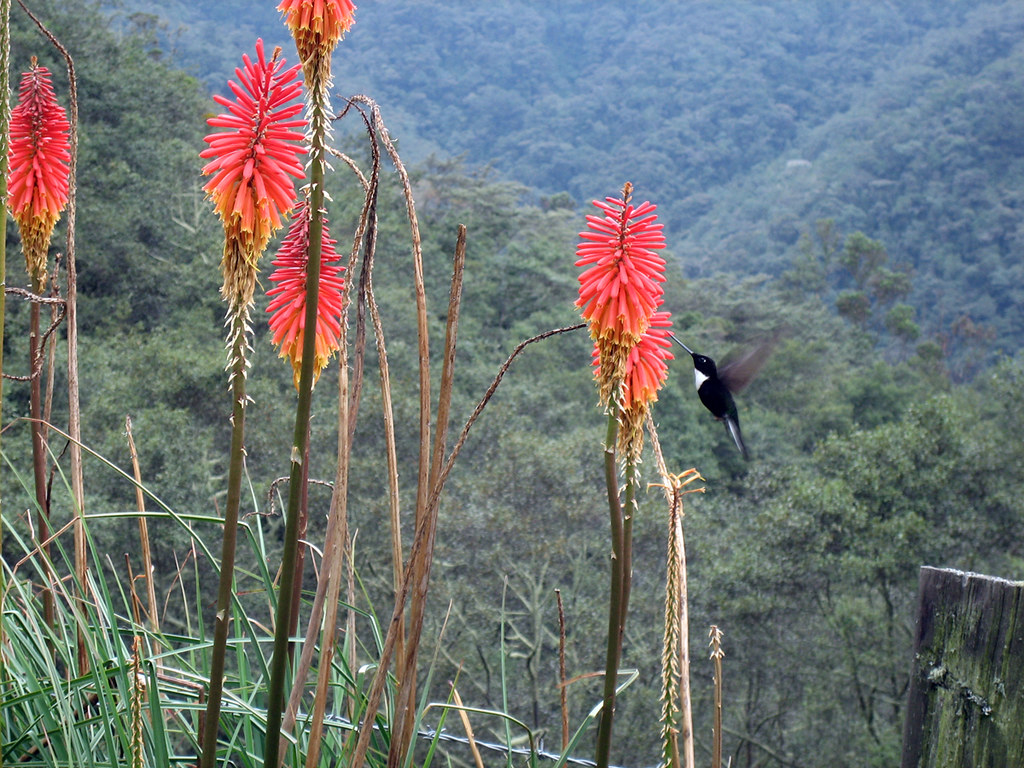 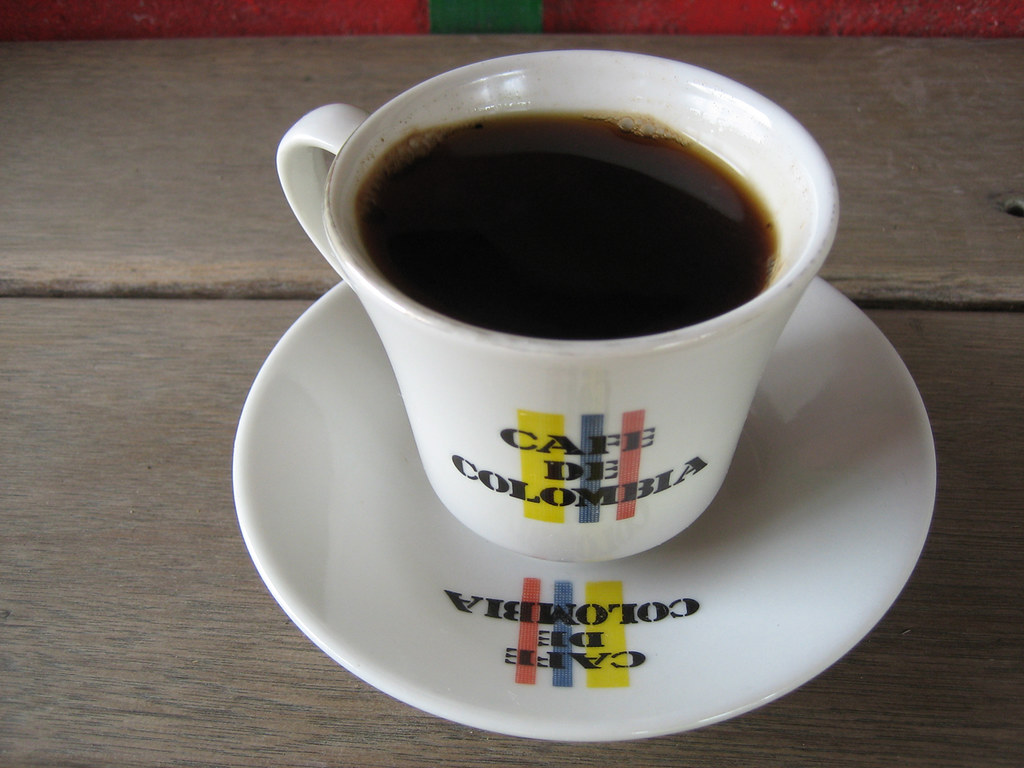 Well we are currently the only foreigners in a place completely off the tourist map called Quimbaya in the Zona Cafetera (Coffee Growing Zone) in central Colombia and all we can say is that COLOMBIA ROCKS!!!

Before we came here, every traveller we met in 1998 and on-line told us Colombia was their most favourite place in South America which amazed us since the rest of South America is so fantastic… and now that we’ve been here for a couple of weeks, we’d have to agree too… Colombia is WAY COOL!!!

We weren’t overly impressed with the cities of Bogota and Medellin as they just looked like all the other cities in South America, but getting out to the country has been truly FUNKY and FANTASTIC!

Colombia is at the northern tail end of the Andes as they flatten out and the terrain is mainly a corrugation of mountains, valleys and plateaus and every district in Colombia seems to have a different look due to the variety in vegetation. In fact Colombia claims to have the most variety of plants and animals in the world second only to Brazil.

Coming down in a bus from Bogota, we passed fields of giant furry bamboo, brilliant red coffee plants and dense lush green fields speckled with brilliant white trees… it was so picturesque, but if there were a few more CIA type fellas running around burning coca trees, then it would have been perfect!!! 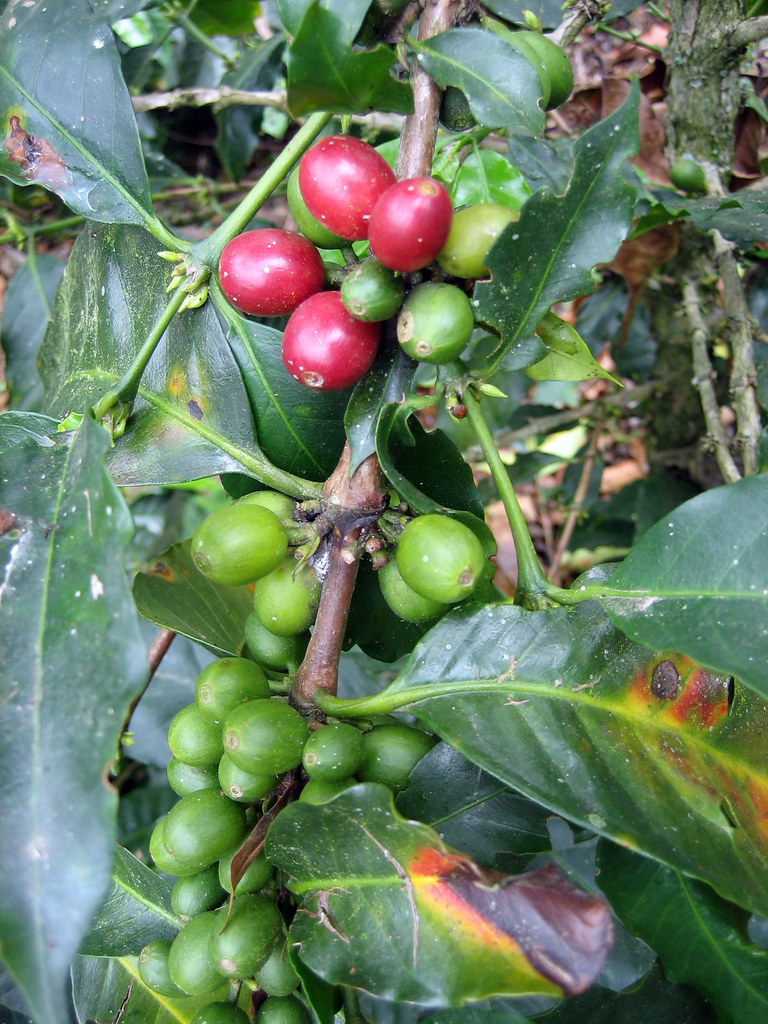 However, the most amazing and way coolest place that we went to was the Valle de Cocora.

When we were at home deciding on where to go, I came across a picture of the Valle de Cocora on the Lonely Planet website, and the picture was so surreal, that it was one of the reasons we came to Colombia. We should hopefully have some pics up in the next couple of days. 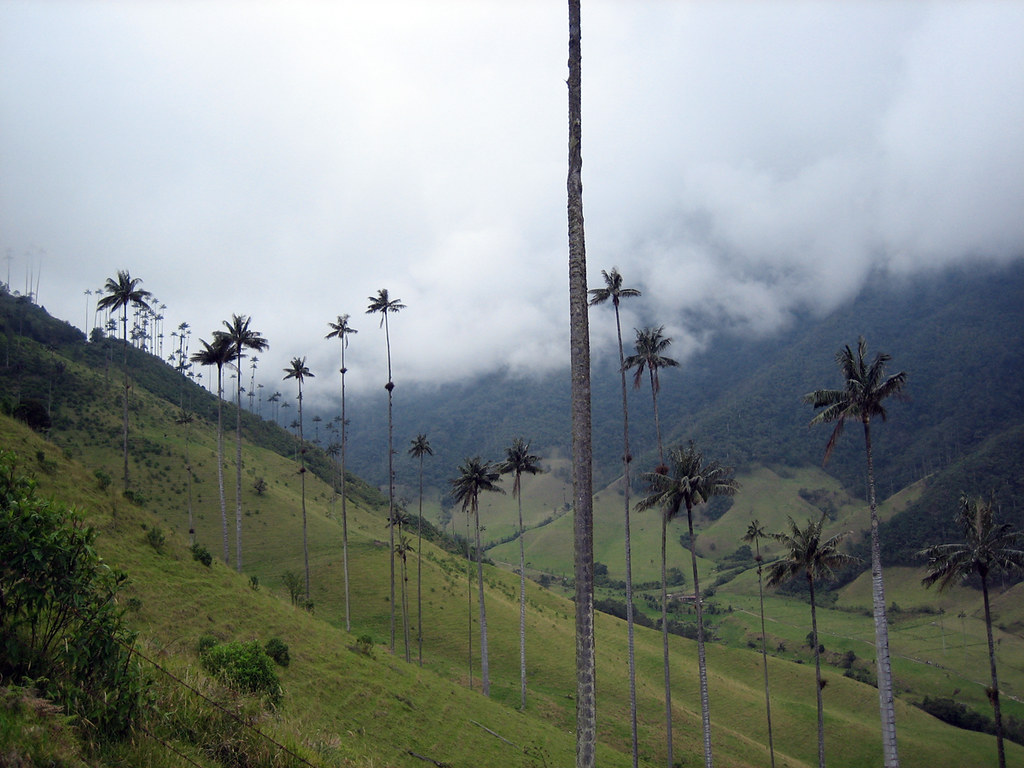 The Valle de Cocora is a valley speckled with thousands of wax palms, the world’s tallest palm tree which can grow to 60m in height and live for up to 200 years. However, even more impressive is that at the altitude of the valley, the whole area is considered to be a cloud forest as it is permanently surrounded in mist… so seeing palm trees here is like stepping back into dinosaur days… 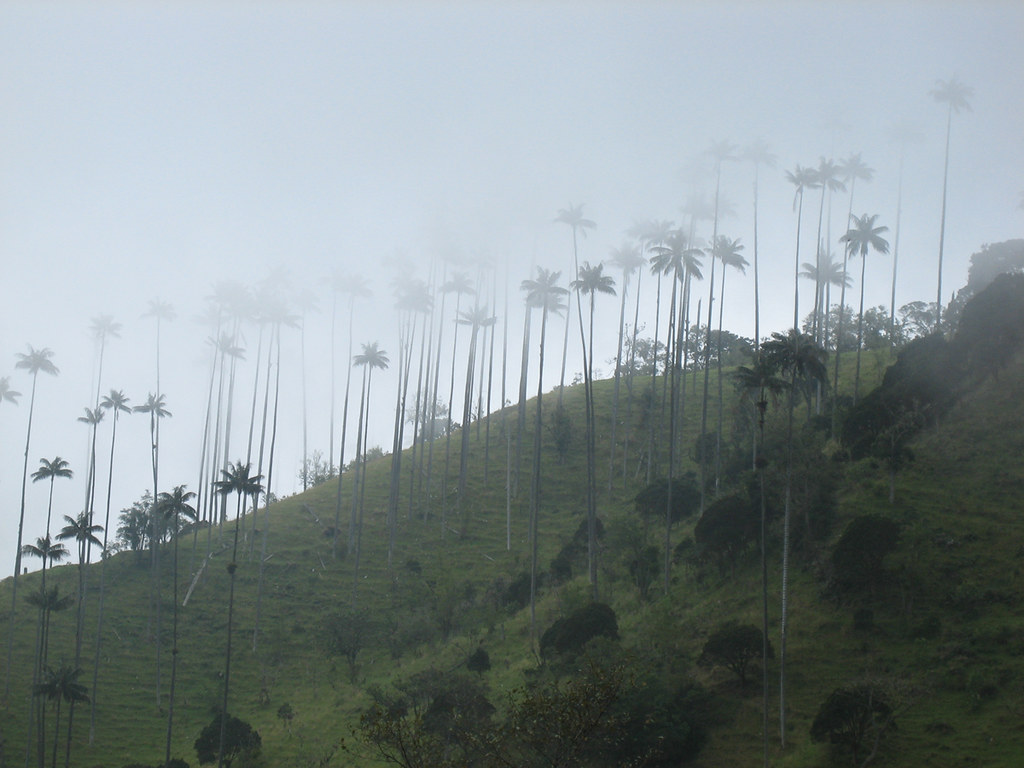 We walked for the whole day through a stunningly lush green valley of rolling green fields with the shadowy ghosts of the palm trees fading in and out of the mists… totally EERIE and absolutely tranquil… Holy cow… the place was soooooo awesome, I can’t even think of enough gooshy mooshy things to write about it…. 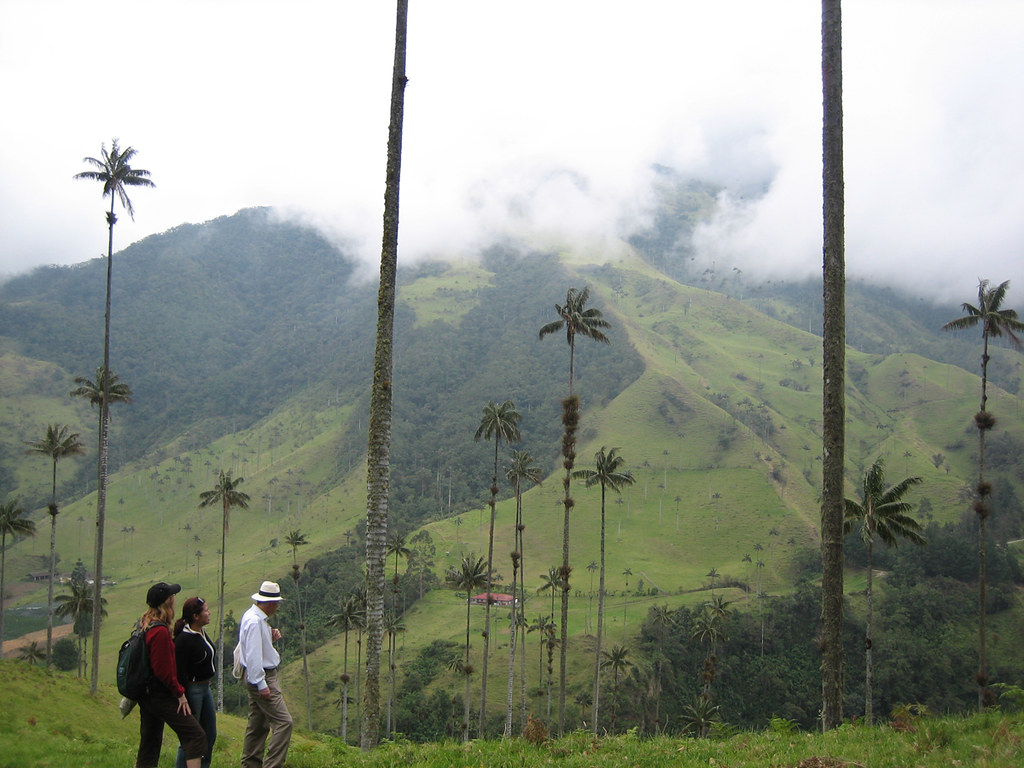 You’ll have to check the photos as it would have to be one of the most amazingly beautiful places in the whole universe that we have been to… and you know we’ve been to a lot of places… we loved it!!!

We also hooked up here with Paola, a Colombian girl and Colin an English guy who were great company as they really gave us a local’s insight into the food and culture of Colombia. 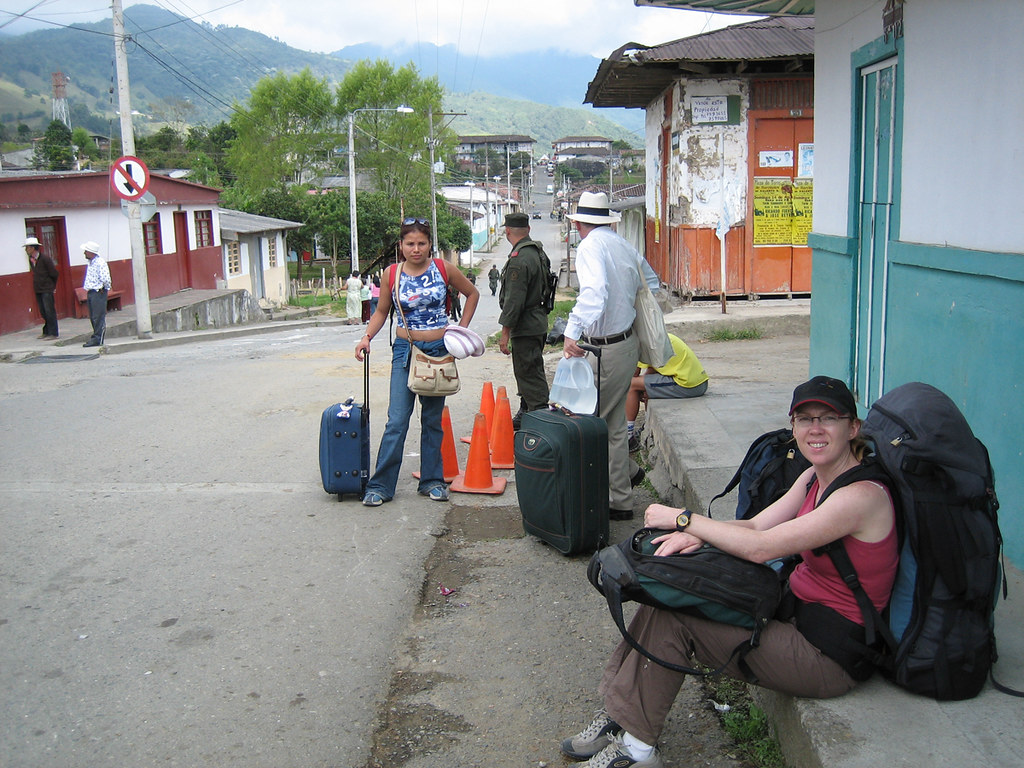 They took us to an organic coffee farm which was cool as we had a great cup of Colombian coffee which thrilled us since getting good coffee in Colombia is really hard since they export all the good stuff…(Anne, you would have loved this)

And the other cool thing they did was to take us to a bullfighting ring.

In anycase, the reason that the bullring was cool, was because of the COWGIRLS!!!…Yeehaaa…!!!

OK… I really didn’t think I had a thing for COWGIRLS!!!… Yeehaaa…!!!, but they really did rock my world that day!!!

Well please ignore all the things I wrote in that email because I’m a complete tosser and Colombia girls are definitely HOT!

In anycase, the COWGIRLS!!!… Yeehaaa…!!! have totally giddy-upped my libido so I’m back in the saddle again BABY…!!!

Yep, the Medellin girls didn’t do it for me as they are a bit plastic fantastic, and we were told that it’s not uncommon for girls to get boob jobs once they’ve graduated from high school. But once out of the cities, the girls are gorgeous and really nice, and definitely second only to Argentinian girls when it comes to sex appeal!!!

…and for all you girls… after Colin the English guy organised a spontaneous street party for us where Avril got a bit of salsa dirty dancing… Avril has officially announced that she reckons Colombian guys are even hotter than Brazilian guys!!!!!! Brazillians are definitely more fit and toned, but she reckons the Colombians just have really exotic features… so no kebabs for her tonight!!!! 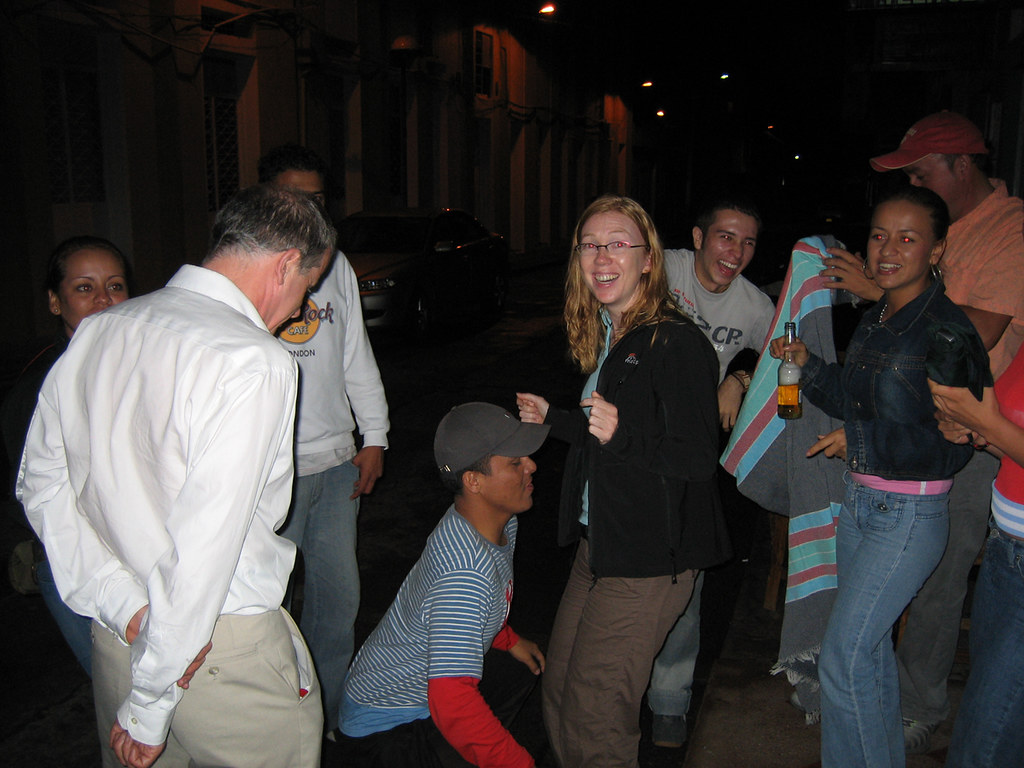 Anyways, tomorrow we are planning to head to a coffee theme park with rides and all (Anne, you just have to come down here sometime!), and then we are going to head to Popayan a colonial city in the south so we can research whether we can get into San Augustin an archeaological site that is next to a guerilla occupied area.

Our pics are here if you want to check them out.

PS. Sorry we haven’t been able to load any pics yet as the internet connections suck, so we’ll do it in the next week or so…. and hopefully we’ll try and get some shots of the spunky muchachos and muchachas too…